We’re having a proper winter, for once, up here in Northumberland. For a few weeks now, friends from balmier climes have continued our lockdown picture swaps by sending pictures of magnificent snowdrops, and even species crocus, while our early bulbs are scarcely bothering to struggle through the frozen ground.

Since the New Year we have scarcely recorded any reading above 5C, even in the (very draughty) alpine houses. We have had intermittent snow-lie for some weeks (even a little on Christmas Day) and it has frozen most nights. Some days, like today, it has remained below zero for most of the day. And, according to the weather forecast, it reached 14C in the home counties! Little wonder our bulbs lag behind.

Naturally, there are compensations. Our bulbs will be lovely, in time, and in the meantime we can enjoy a display which is largely withheld from our southern friends. I am talking about the spectacular winter rosettes which are displayed by some of the evergreen, monocarpic Meconopsis, and by the larger New Zealand celmisias.

For most gardeners, Meconopsis are ‘large blue poppies’, and those living in many parts of the country look at me sidelong through big eyes and sigh ‘you are so lucky to be able to grow them’.  Well yes, for a month or so they are indeed lovely, but I find they take quite a lot of work, don’t survive very long, and look untidy for the rest of the year, until they die down in the autumn.

For me, the real treasures are those Meconopsis species with beautiful evergreen rosettes.

They shine through the darkest, dirtiest of winter days, and when they sparkle with frost they are even more of a joy to behold. They are monocarpic plants, so that after they have produced a spire of flowers in June and July, they set copious seed as they start to die.

If they grow slowly, you may be able to enjoy a plant for two or even three winters before it flowers. But if they are happy, they are biennial. Here, once January-sown seed has germinated in late March (leave it outside, uncovered), young plants are given liquid feeds, pricked out and potted on as soon as possible, and planted out in rich, moisture-retentive compost by late May. Kept moist, they grow apace and form fully sized rosettes by the end of July, to be enjoyed for a year until they flower the following summer.

Usually I plant them on a slope, and in beds raised above the ground by the provision of extra, well-rotted compost. In most winters, the majority don’t need a cover, although they do sometimes rot in the mildest of soggy winters. Consequently, here they have enjoyed this winter more than most.

However, I find that Meconopsis superba, arguably the finest of all, does appreciate being covered with a frame-light from November to mid-March. When it flowers, M. superba has velvety white flowers, which set off the central black stigma and golden stamens. 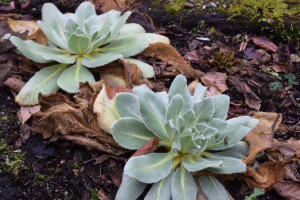 Meconopsis dhjowii is another fascinating plant which needs some degree of protection here if it is to survive winter wet. Named for the Nepalese Army Major who discovered it, this is a very different plant with its finely-dissected hairy leaves.  In flower, the spikes of flowers are usually a pale lemon shade. Both species come from the southern slopes of the Himalayas. Consequently, they enjoy monsoon rains when they are in growth, but very dry winters where they may, or may not, enjoy some protection from dry snow. These plants are bone-hardy, but they do dislike too much winter wet. 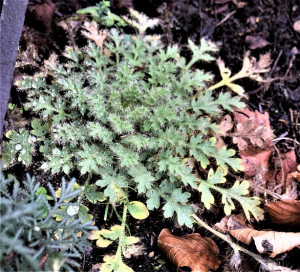 In flower, my favourite monocarpic meconopsis is probably M. staintonii, another Nepalese species named for its discoverer, this time Adam Stainton, an independently wealthy English explorer who collected plants in Nepal over more than a decade in the 1950’s. This not only has lovely winter rosettes , but, brilliant scarlet flowers in the strain that I grow. There are also white and yellow-flowered versions. 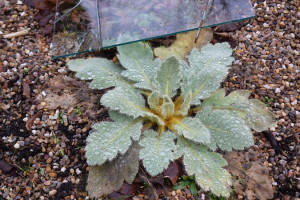 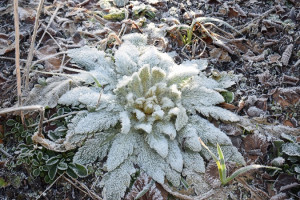 These hybrids, which can also involve M. nepalensis, M. wallichii and M. robusta are known collectively as M. x hybrida. Although M. paniculata has yellow flowers, the hybrids can yield a rainbow of colours from white, cream and yellow to red and blue. 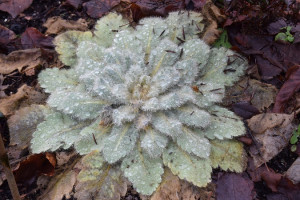 Let us move on to Celmisia, the ‘New Zealand Daisies’ (although several species are from Australia). This is a large and varied genus with more than 60 species.

All are evergreen, and because many have attractive foliage with silvery ‘pellicles’ of plastered hairs, or furry pubescence of silver or cream, they reward the alpine gardener for twelve months of the year. They vary from silver cushions and narrow-leaved subshrubs to quite large tussocks with silvery, spear-shaped leaves, and it is the latter that provide the greatest winter impact.

Of the larger species, my favourite is possibly Celmisia verbascifolia, which is rarely grown. From a packet of wild collected seed, only two germinated, and a single seedling thrived. This now produces several large daisy flowers every summer, but it is the beautiful foliage that I treasure the most. This species is native to the south of the NZ South Island. 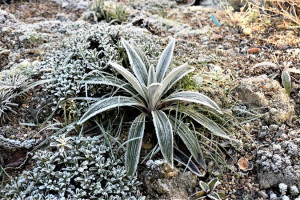 Rather smaller and more silvery, C. monroi grows further to the north, and is the parent of several strains of hybrids, such as the ‘Wooley hybrids’, raised by my friend and neighbour Alan Furness who unquestionably grows the finest collection of celmisias anywhere. 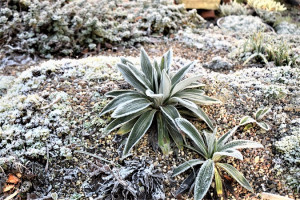 Of the larger celmisias, C. semicordata is the best known, and a widespread and variable plant in the wild. I raised a number of seedlings of C. semicordata v. stricta from seed many years ago. Only one has survived, in a sand-bed, and like the others flowers regularly every year. 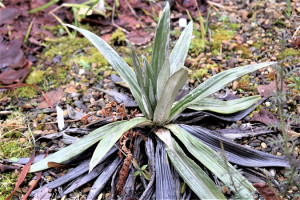 In stark contrast is Celmisia angustifolia, a silvery subshrub which grows well here. The plant pictured inhabits a large trough. 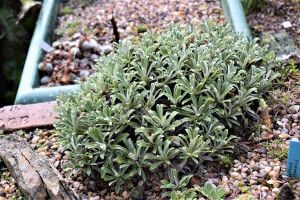 Another good grower is the white-leaved Celmisia allanii which grows in several parts of the garden. 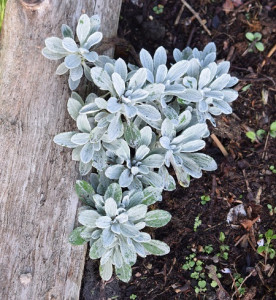 There are many other evergreen, silver-leaved rock plants which enhance the garden through the darkest of winters. Foremost amongst these are the silver saxifrages, of which I grow quite a large number. A recent favourite is Saxifraga ‘Mercedes’, an exchange with Adrian Young of Waterperry Gardens with whom I had exchanged a couple of my own new hybrids. 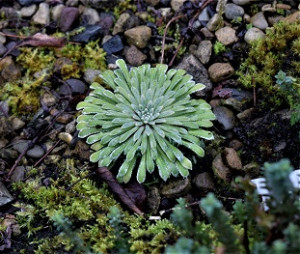 But when structural plants are plated with long-lasting hoar frost, as has happened so often this winter, the most mundane plants can glisten in the winter sun, as does the dierama in this final photograph. 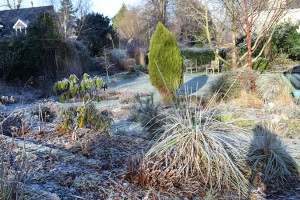