Imagine my surprise when a few months ago I was invited to Prague to act as an External Examiner for the defence of a Ph.D. thesis. So it was that last weekend I dusted off my academicals, unused these many years, and hopped on a plane.

My Czech host, Jan Kirschner, an outstanding botanist of international repute and well-known in this country, kindly gave me of his precious time for much of the Saturday and Sunday. Knowing my predeliction for all things alpine, he kindly arranged for us to visit the garden of Jiri Papousek, not far outside the city, on the Saturday afternoon.

Now, I had visited this garden on a previous occasion six years previously, during a Czech-based Rock Garden Conference, and had in fact reported on it in these pages (issue 226). Back then the special alpine areas were less than half complete compared with today, so I was completely blown away by what must be part of a very short short-list of the best private alpine gardens in the world. It is truly magnificent, and I felt truly privileged to be allowed to visit it.

As we know, a good garden is never finished, and Jiri is still engaged on building a large crevice bed at the front of the house. As yet, this is scarcely planted. 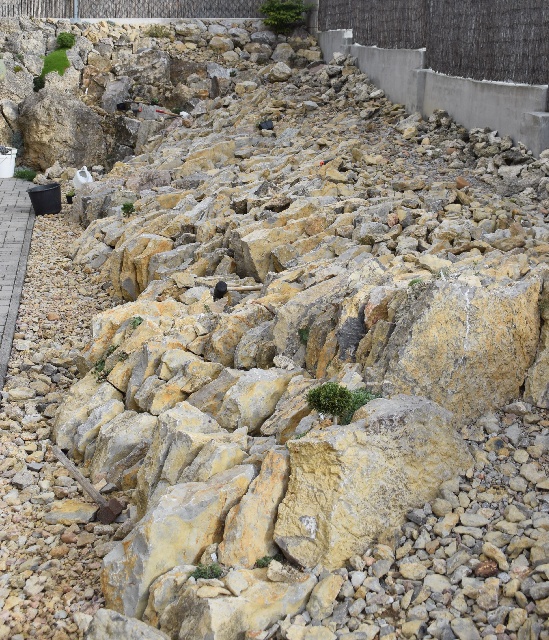 This sandstone crevice bed is very much in the ‘Czech style’, much parroted in Britain but rarely with anything like this finesse. Among many other talents, Jiri has a quite exceptional eye. (He will enjoy this sentence; his name translates I believe to ‘Mr Parrot’).

Round the corner is a wonderful tufa cliff, perhaps the best I have yet seen (yes Edinburgh, Kew, Harlow Carr and the rest). In fact it reminded me forcibly of the doyen of tufa cliffs, in fact probably the original example, that of Roy Elliott. I only saw this in its dotage, when it was still good, but early photos show it to have been magnificent. The cantilevered glass cover design is very similar (both Roy and Jiri had/have considerable engineering skills). Dare I suggest that Jiri’s construction is even better and is now mature but not overaged with some wonderful plants. 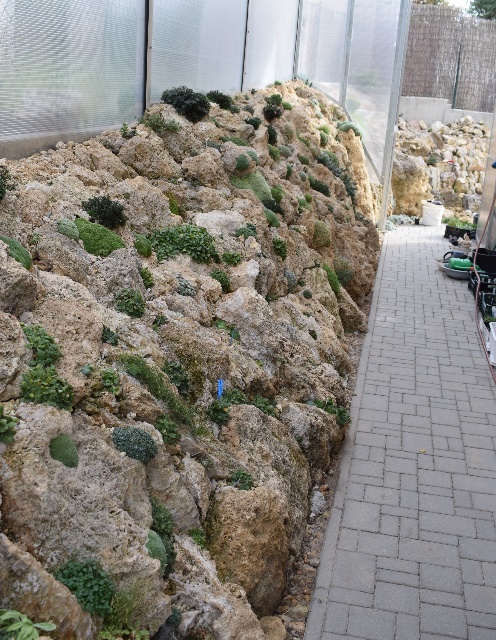 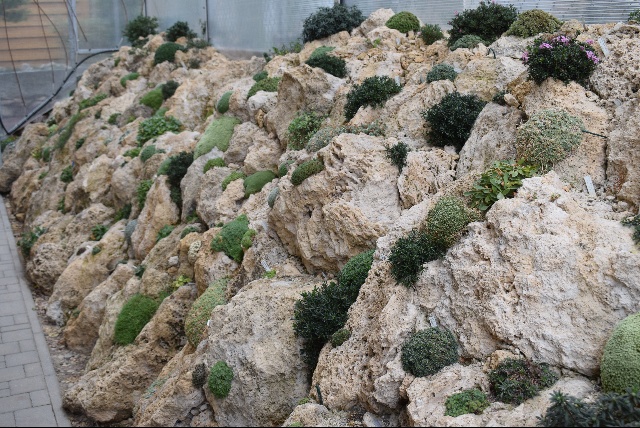 As will be clear from the above photo, the cliff is full of a huge collection of daphnes, with many D. petraea and D. x hendersonii clones; also lots of the Slovakian D. arbuscula. Here are a couple of D. petraea clones. 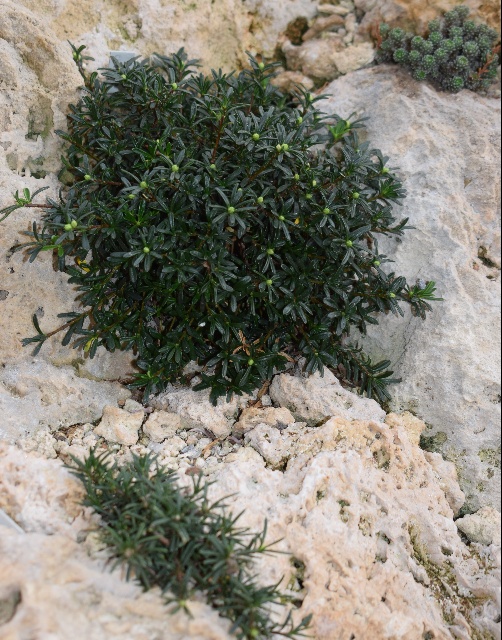 Jiri grows Jancaea inside and out, not perhaps with the freedom of his countryman Vlastomil Pilous, but still with enviable ease. 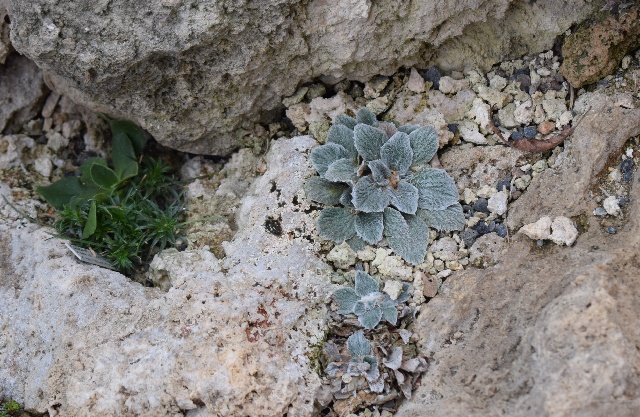 Behind the house is the main garden which stretches some distance back to where a swimming pool has been built (his wife says firmly that this area is ‘out of bounds for rock gardening!’). It truly forms a harmonious whole. 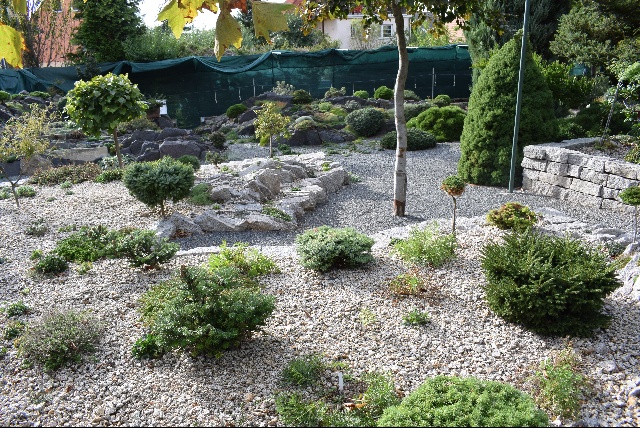 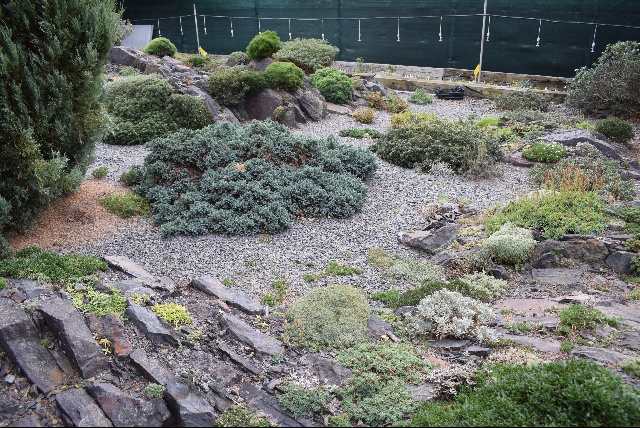 What I found really extraordinary was that Prague had just suffered one of their hottest driest summers ever (more so than ours; they have hotter summers than southern England anyway) yet all the plants seemed in perfect health and virtually undamaged. Jiri says he watered many areas every day (he suffered no water restriction), but this still suggests that his beds and composts are chosen and built with great skill.

This is particularly true of his peat beds. Just as he drives 600 km into Slovakia to collect tufa (but free to collect when he gets there!), so he drove to southern Sweden to dig his peat blocks and drive them back in a hired trailer. Remarkably, all his peat plants, many grown vertically in some shade, seemed in remarkable health. 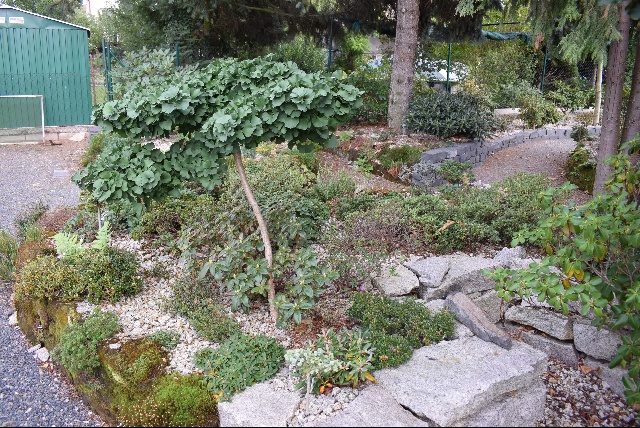 And a view of a few of the treasures growing there (which include Diapensia obovata). This is the finest Rhodothamnus chamaecistus I have seen in cultivation. 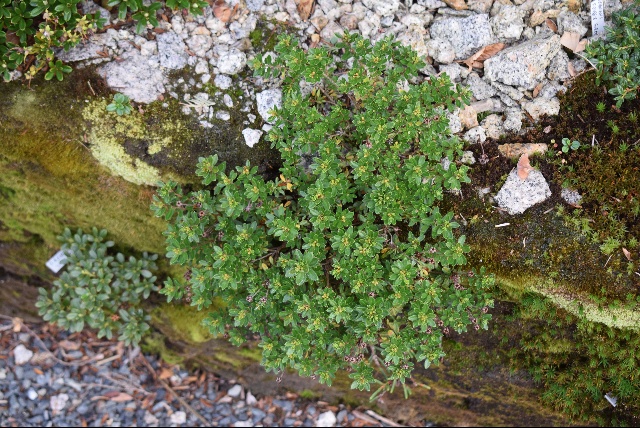 The difficult and delightful Rhododendron pumilum. 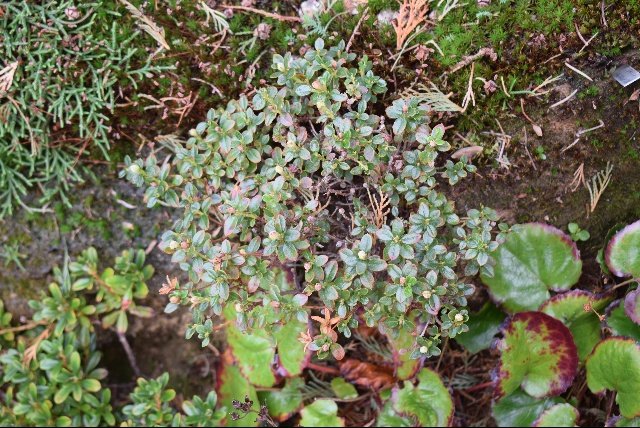 The photo above also shows a few of an almost comprehensive collection of shortias (he would love to acquire ‘Leone’; wouldn’t we all!) and one of many cassiopes. Amazingly he grows Cassiope wardii, and (below) a fine form of Cassiope fastigiata. 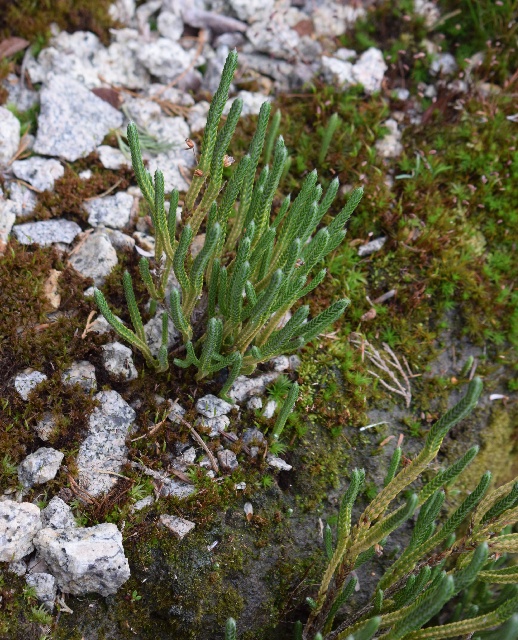 Here are some of Jiri’s more established crevice beds, with many more daphnes. 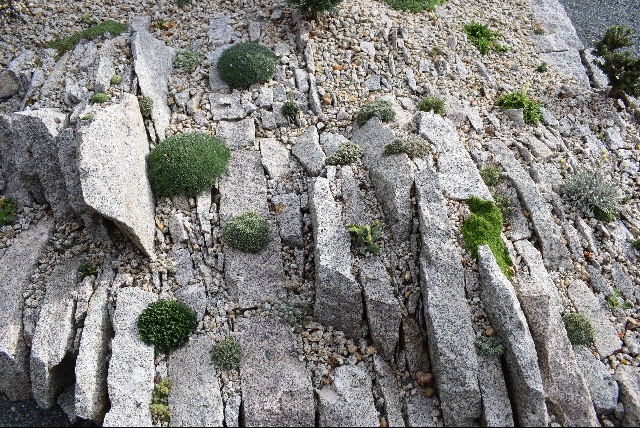 I was surprised to see an old Daphne sericea. I shouldn’t have thought that this Cretan species would be hardy in Prague. 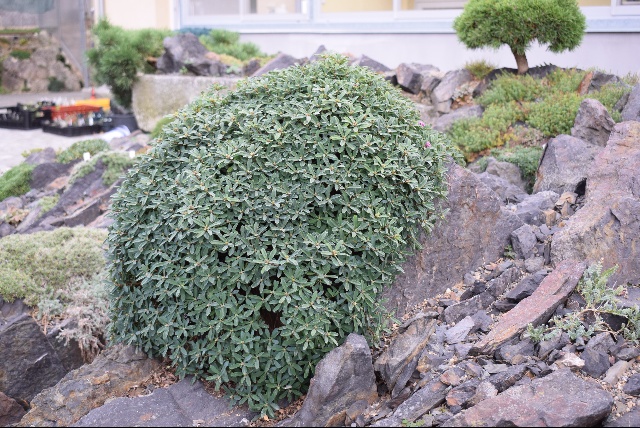 There were many forms of Daphne cneorum, many dwarf. However I was greatly taken by this larger but very compact variety which seems to be unnamed. 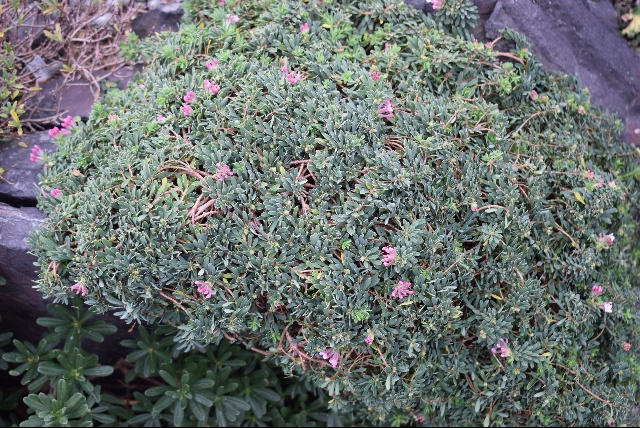 Jiri has adapted a glazed porch as an alpine house. I should have thought it would get very hot in summer, but it is north-facing which will help. In this he had a large collection of Dionysias, very well grown. In this photo Jiri is on the right, Jan Kirschner on the left. 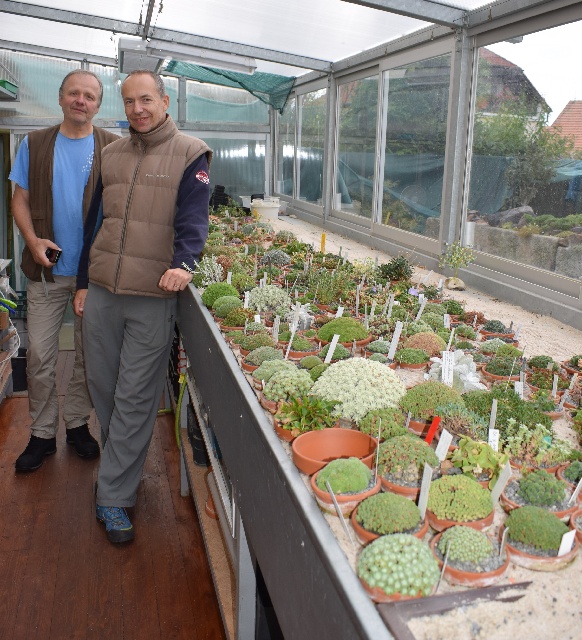 One final look at part of Jiri’s collection of dwarf conifers and rhododendrons, all immaculately grown. 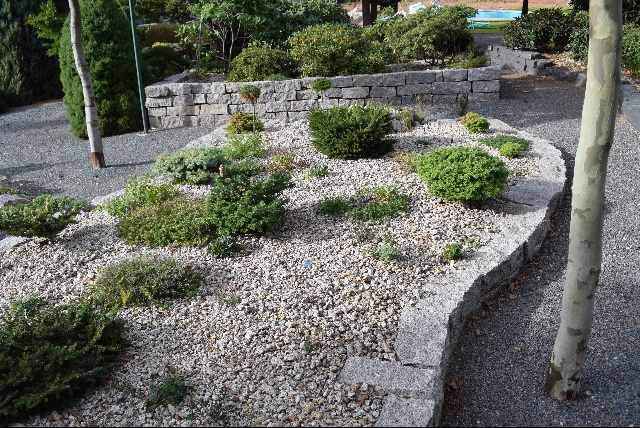 On the Sunday morning, Jan took me to 15 km out of Prague to Pruhonice castle and park, where the Institute of Botany, where he works, is housed. Together with the Superintendent of the Alpinetum who kindly accompanied us, I was given a splendid tour. Here first is the castle. 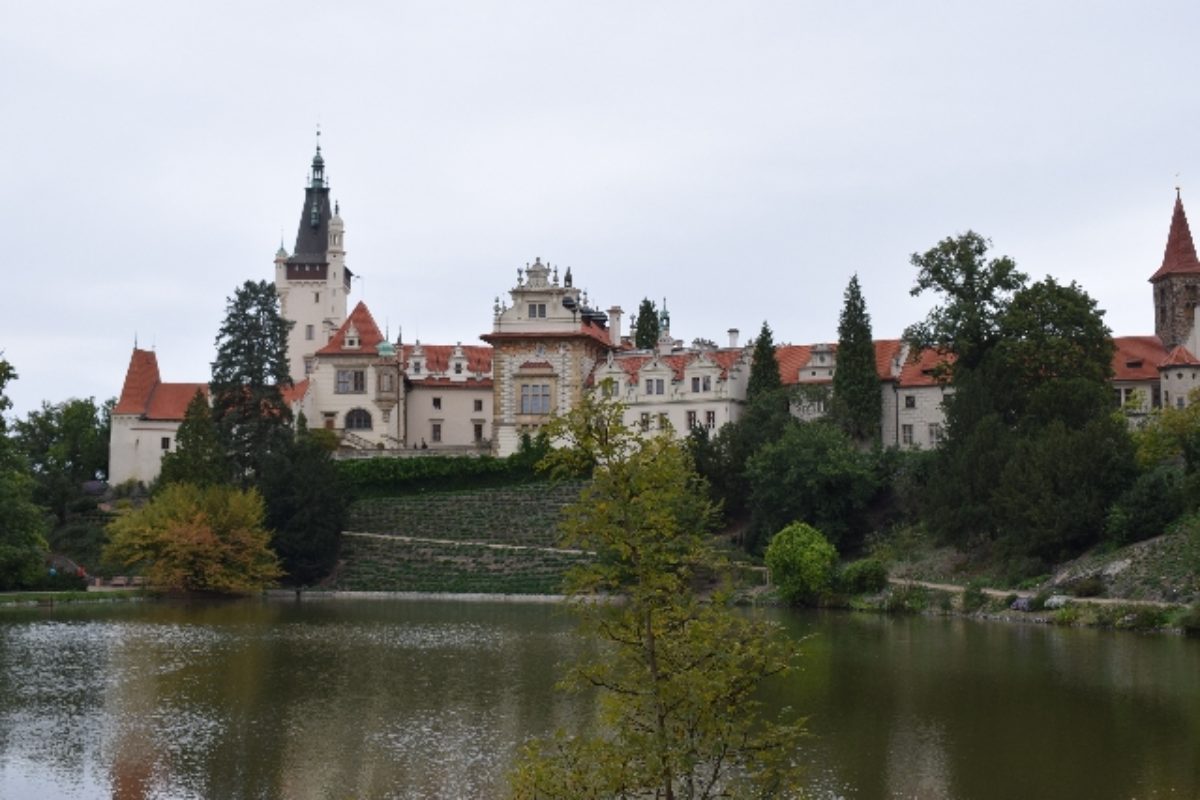 The rock gardens are amazing, built on great rocky natural outcrops running steeply down to the lake. Some are planted, but much of the colonisation (for instance by sedums, sempervivums and saxifrages) is natural. In this area, a whole slope has been colonised by a hardy Opuntia which will enjoy the warmer summers and colder drier winters compared with ours in the UK. 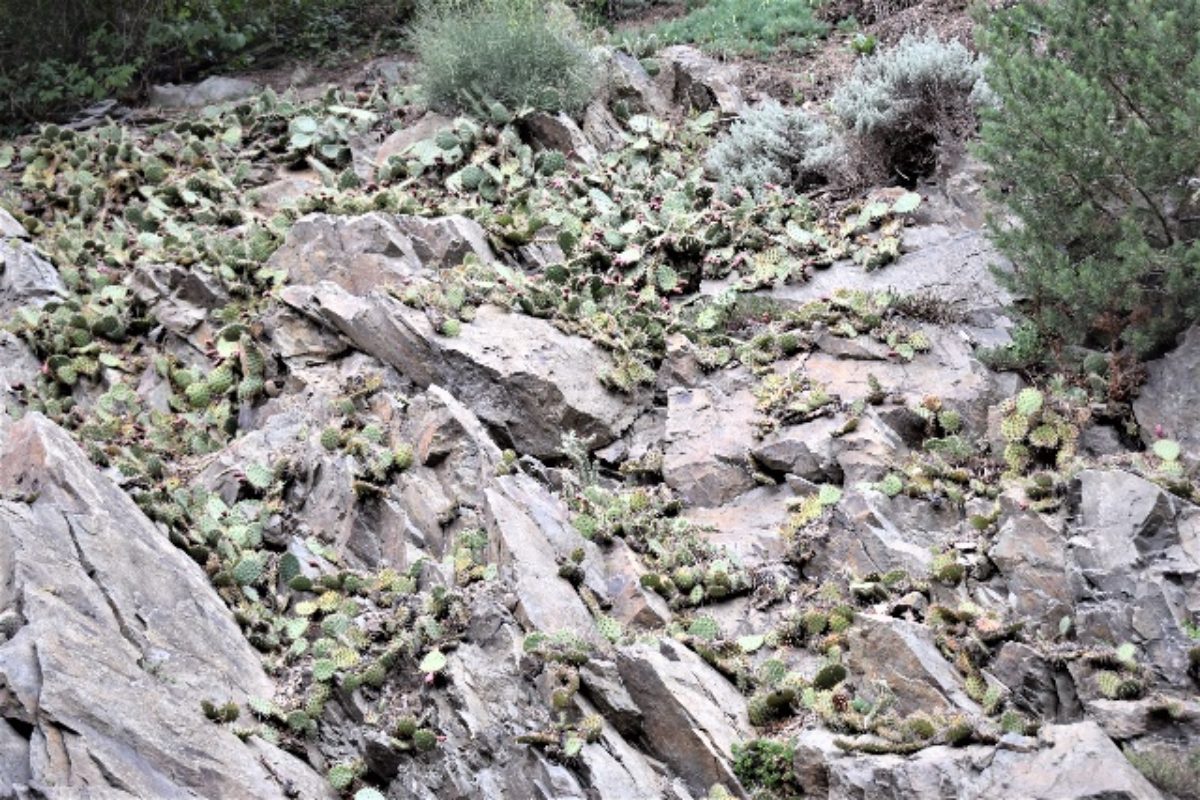 Here is a view down the slopes from the rather vertiginous path (not open to the public) that transverses the upper rocks.

A specimen of Pinus aristata, the high alpine Needle-cone Pine from the Rockies. I used to grow this wonderful plant until it outgrew its space. 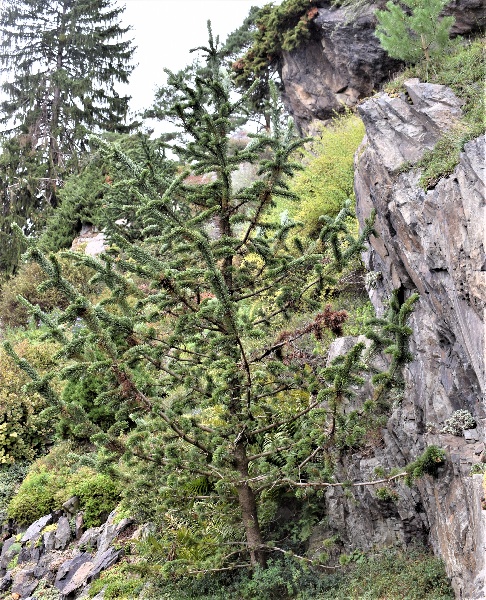 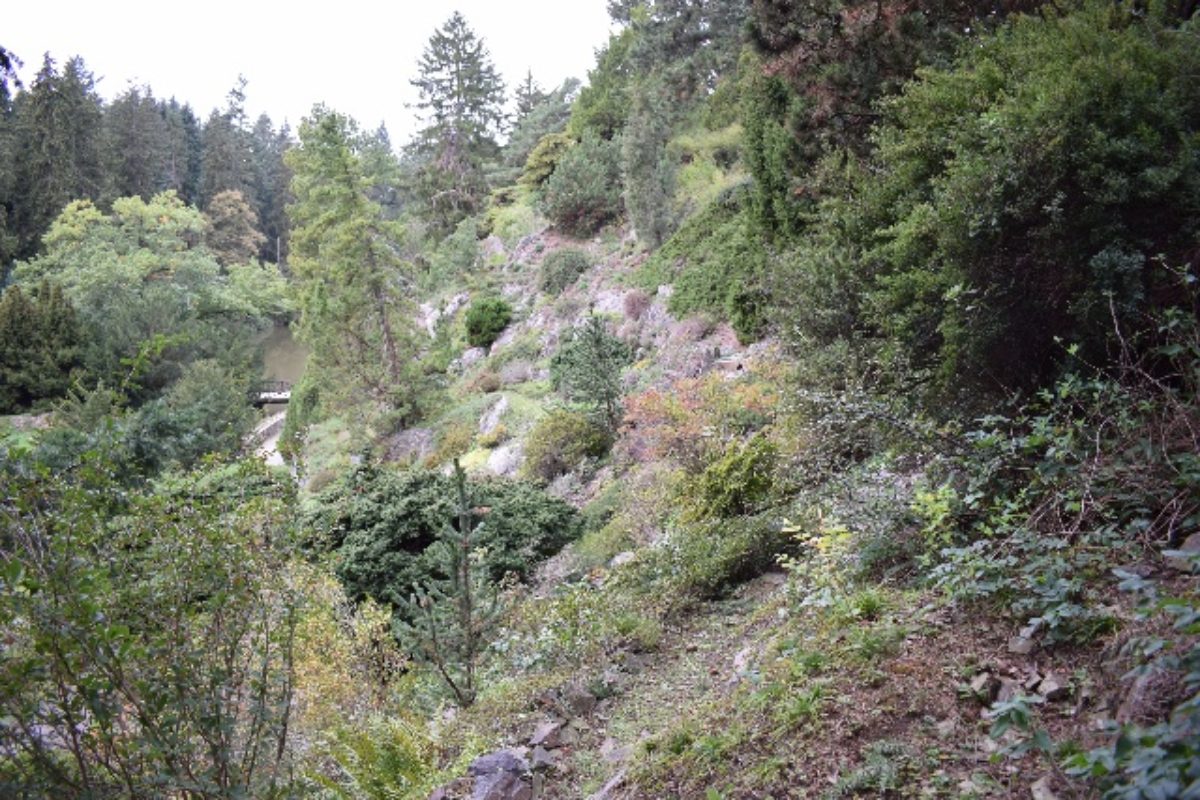 Despite the late date, there were many interesting subjects in flower, many large in scale to fit the grandiose setting. This attractive aster is A. pyrenaeus ‘Lutetia’, which I had not come across. I thought it was quite the equal of A. x frikatii ‘Moench’ 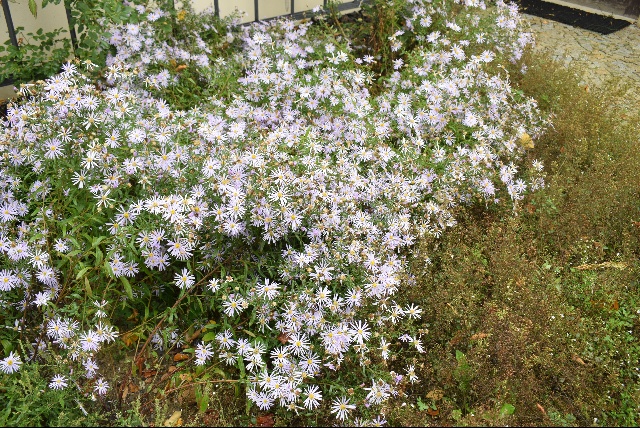 Anemone sylvestris is apparently a native in the Czech Republic. Lucky them! 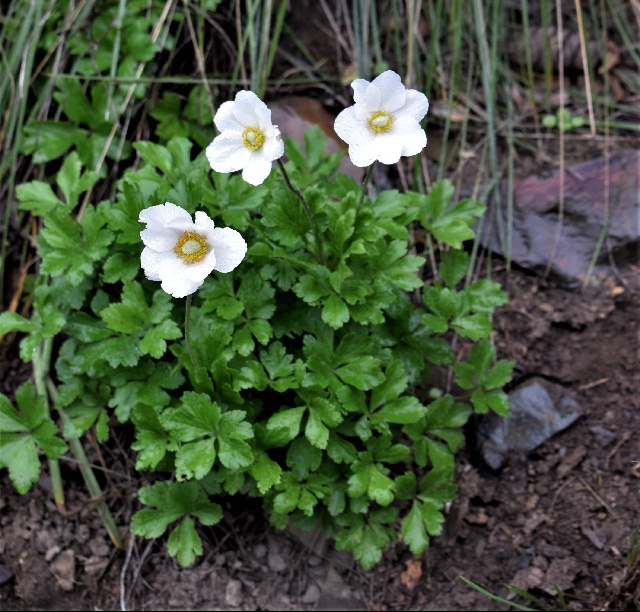 A final picture of sempervivums and other succulent alpines colonising rocks in this majestic, semi-natural site. 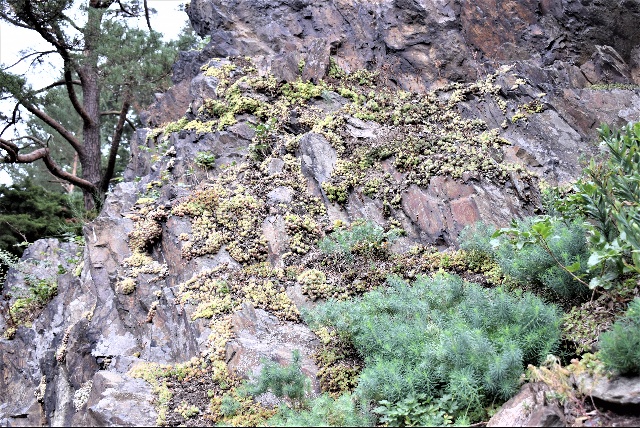 John is Emeritus Professor of Botany at the University of Newcastle, where his research interests centre on the evolution and genetics of plant breeding systems. He is an authority on the genera Primula and Taraxacum (dandelions!). John is an AGS judge, exhibitor and Vice-President and previous President (2003-6)