They said, what with the drought, heat etc. that we would have poor autumn colour this year. Well, not here we haven’t! Rather early, the garden has settled into its full autumn magnificence.

In its development phase I planted rather too many small trees for a successful alpine garden, and many were chosen with fall colour in mind. On the whole this strategy has succeeded and October is close to being my favourite month in the garden.

Most of the best subjects are visible from the house. A noted exception is one of the best, the delicate Acer micranthum which I would heartily recommend for any sheltered spot. Here it is tucked away in the top corner of the garden, sheltered by our monumental beech hedge..Over 20 years it has only grown to 2.5 m in height. In the foreground is another of my favourite plants which provides classy August colour in several places, Kiringeshoma palmata. 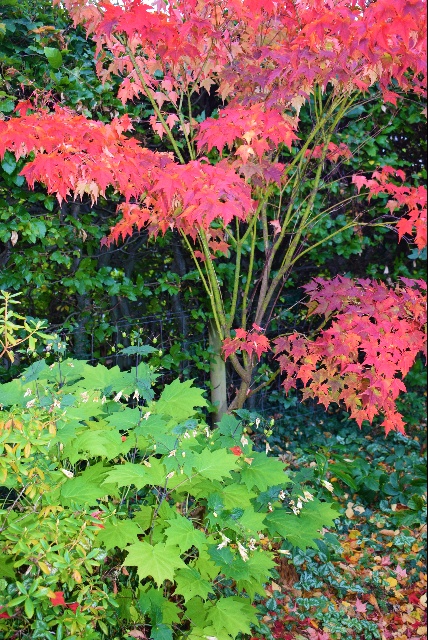 Just this side of the acer are two berried plants which intermingle. The Skimmia x reevesiana (with a male in tow) is now known as ‘Basil’s bush’, as our favourite and most recent cat is buried at its foot. Sorbus lancastriensis, originally grown from a berry pocketed on Humphrey Head in the Morecambe Bay, is one of the revelations of this garden. The large, brilliant red, berries contrast superbly with reliable, long-lasting yellow autumn foliage. 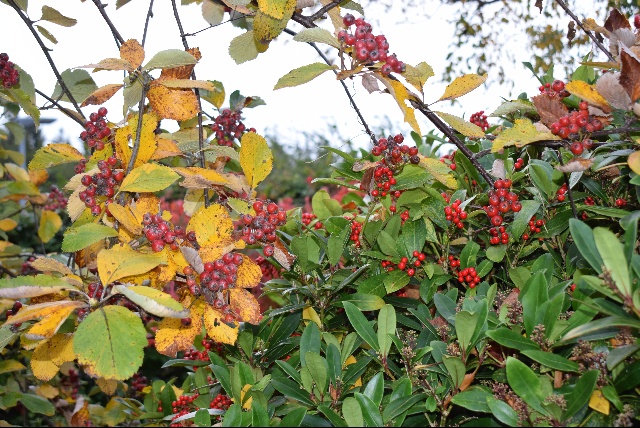 Nearby, on the other side of a Betula ermanii which coloured early and has already lost most of its leaves in a warm equinoctual gale, is a Sorbus rosea, also grown from seed. This hasn’t grown much and is probably hemmed in by too many competitors, but its large berries which finally turn day-glo pink are very welcome.

Nearby, on the other side of a Betula ermanii which coloured early and has already lost most of its leaves in a warm equinoctial gale, is a Sorbus rosea, also grown from seed. This hasn’t grown much and is probably hemmed in by too many competitors, but its large berries which finally turn day-glo pink are very welcome. 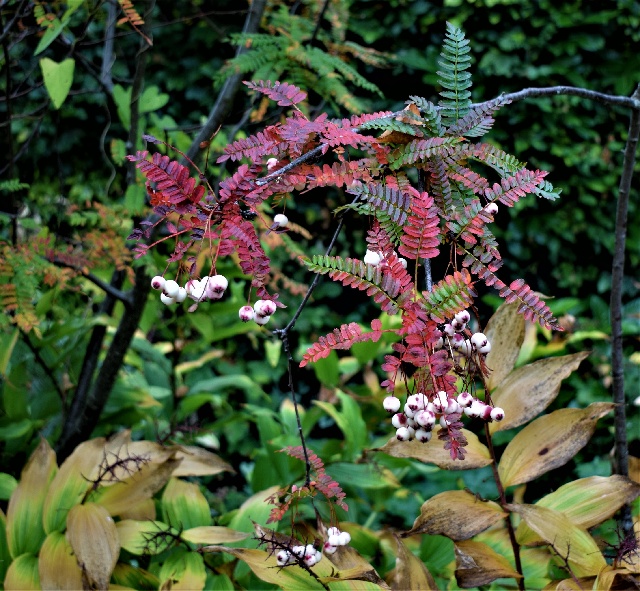 Mind you, if the Wood Pigeons continue to guzzle berries at this rate, the display won’t last that long! I have labelled the following photo ‘Greedy Guts’!  Fortunately it is so windy today that they can’t support their corpulent figures on the swaying branches! This is our Sorbus ‘Joseph Rock’ seedling. 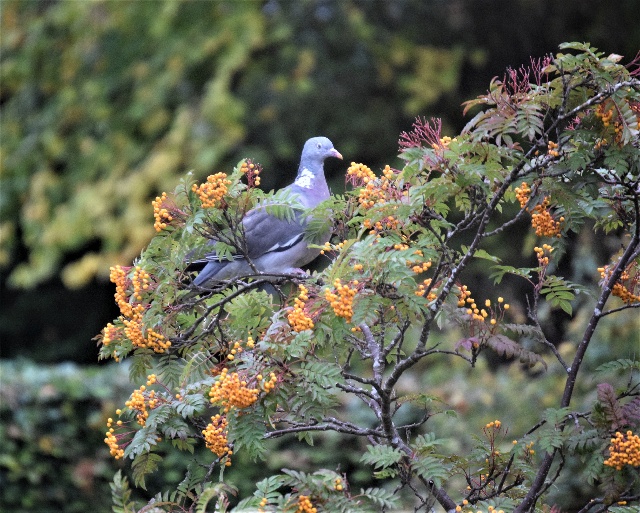 Continuing the berried theme, a couple of pyracanthas which are magnificent this year. The first (red) one is on the pierced wall and has benefited from Sheila’s hard pruning, as well as the hot summer. This is a Greek native and most years we are too shady and cool for a good display. 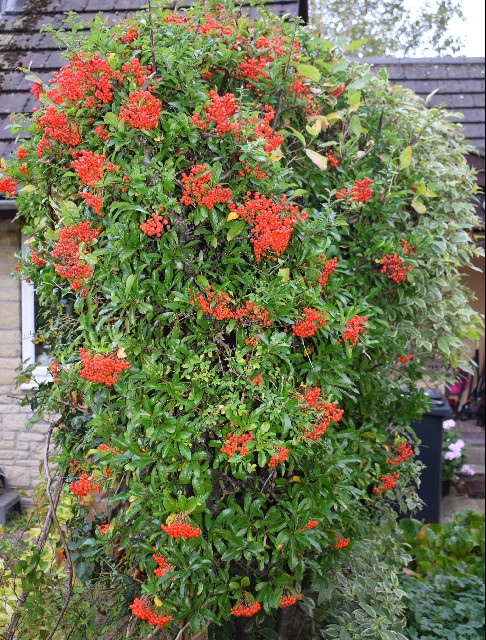 In this one there are a few late flowers on Clematis montana as well.

Crocus banaticus sets off the pink berries of Sorbus reducta. 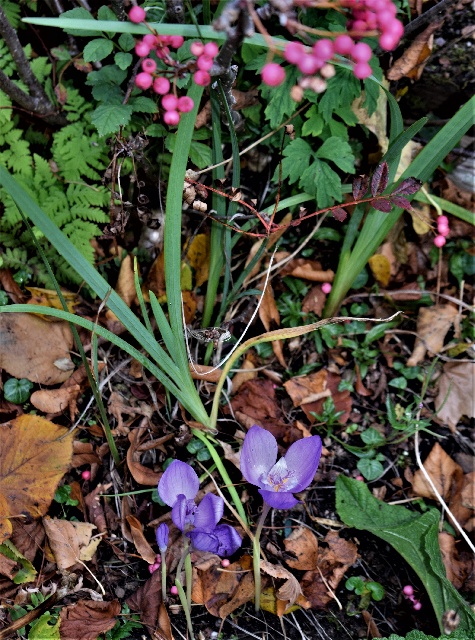 Elsewhere in the garden Crocus speciosus is just starting to appear. It will carry on nearly to Christmas. 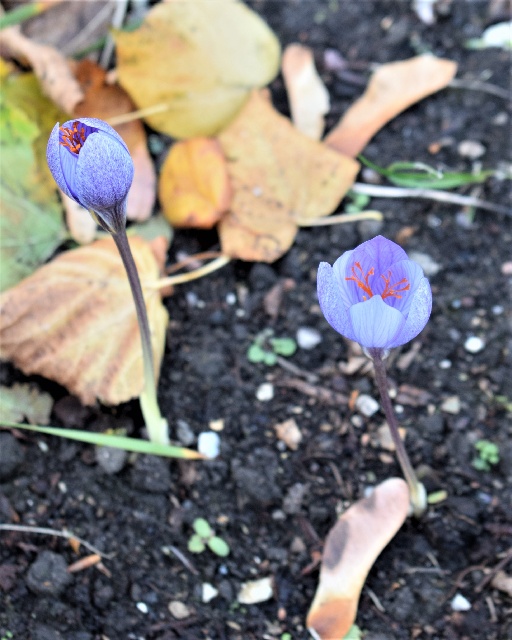 Sheila’s grass bed is really at its best now. Not my thing, and yet I have to say the area looks superb and gives a totally different spin on autumn. 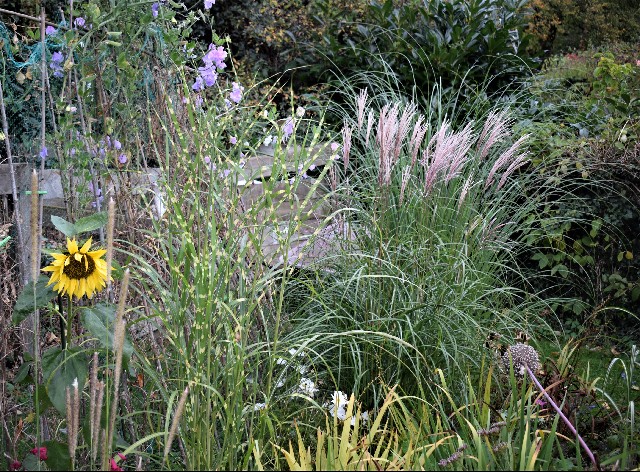 Elsewhere in this bed, Penstemon ‘Garnet’ makes a great pairing with the grass Imperata cylindrica ‘Rubra’. 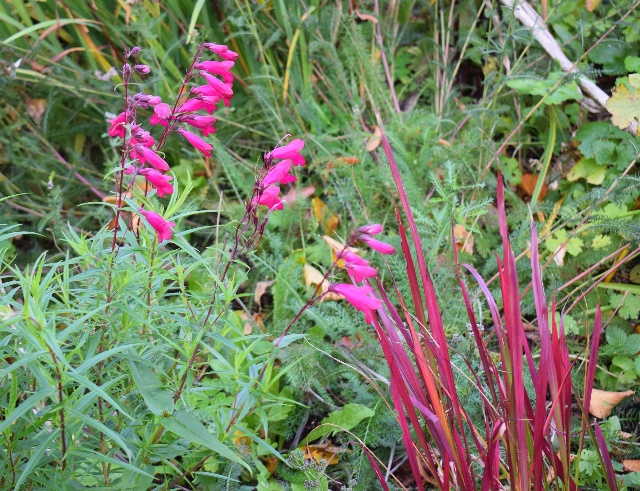 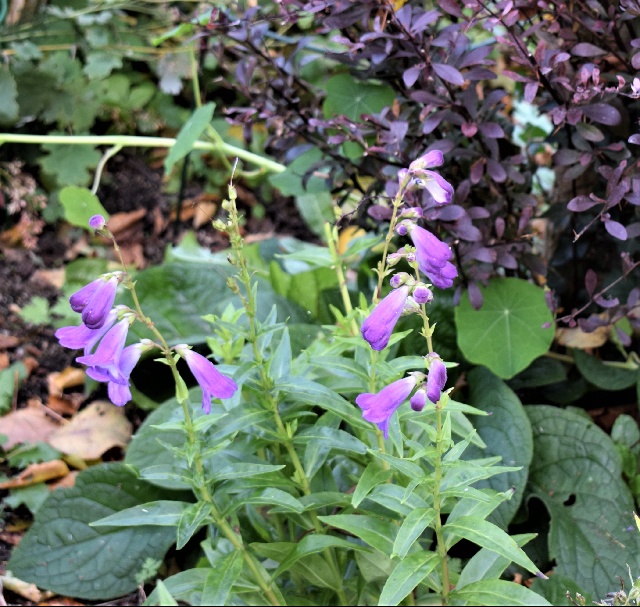 Turning to the front garden, colour is approaching its zenith. At present, Vaccinium corymbosum is at its best. 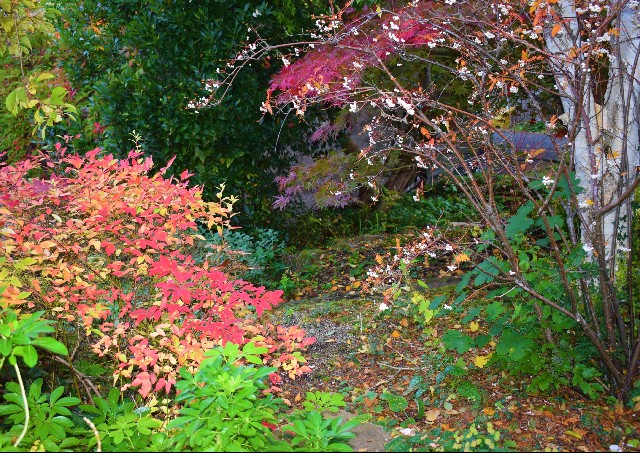 There are several Acer palmatum ‘Dissectum’ types in the garden. The others are purple or red in  autumn, but this one, paired with Viburnum sargentii, turns gold. 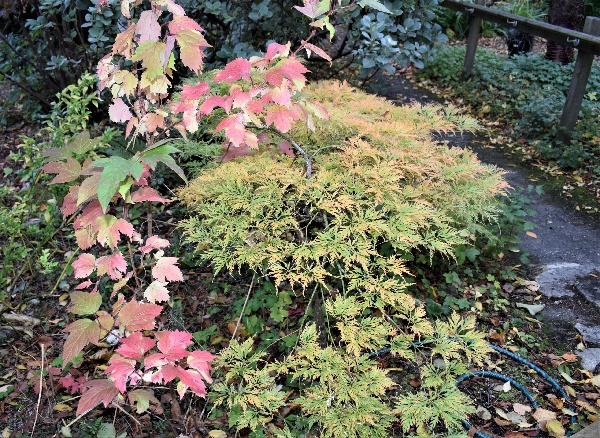 Nerine bowdenii has also excelled itself, not surprisngly after this hot summer. I guess its great everywhere this year.

A few crocuses from the alpine house next week perhaps (the crocuses are mostly late this year) but one surprise has been this Lewisia tweedyi grown from AGS seed this year. I didn’t expect a white one and am very pleased! The flower is huge! 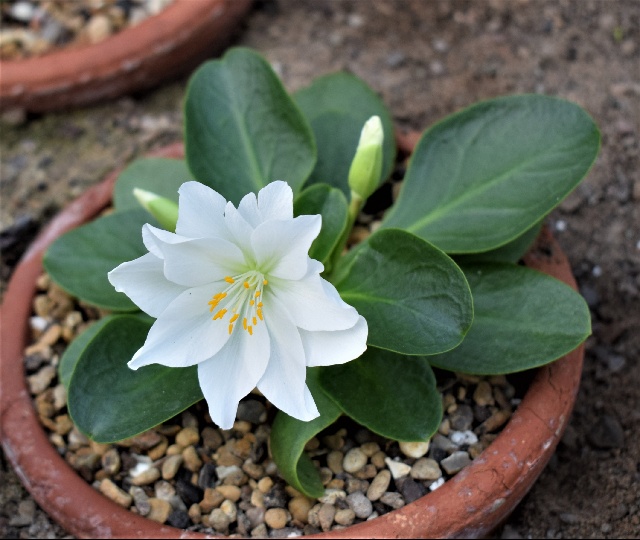 A final dusk shot of autumn trees, all grown from seed here and now about 25 years old. From the left Sorbus pseudohupehensis, Sorbus commixta (supposedly but apparently hybrid) and Acer circinatum. 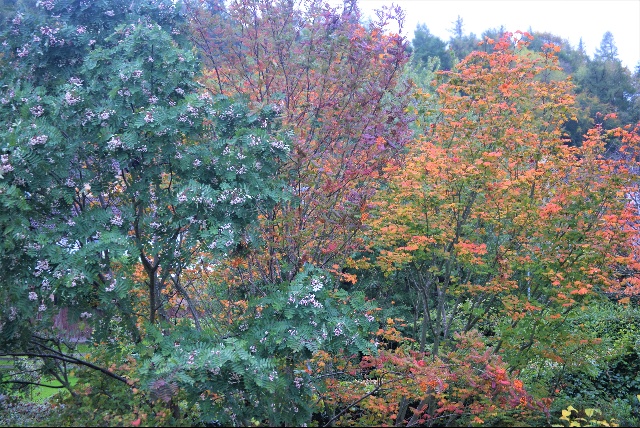