For as long as I can remember (and my membership of our local AGS Group dates back to September 1970!) Ray Johnstone was a constant, knowledgeable, valued member, a great propagator of sale plants for the Shows, successful exhibitor and possessed with his wife Gloria of a lovely garden and a huge range of mostly Mediterranean bulbs and cyclamens. Ray and Gloria travelled widely in the Med., especially Greece, and we shared an affection for many of the hotspots in Crete and the Peloponnese.

Ray had been ill for some time and sadly died in the late spring. Gloria will stay in their house and treasures the garden, but is keen that the bulb and cyclamen collections (in pots) should go to good homes. Now, I have gone into this amount of detail because we Alpine Gardeners are an ageing cohort and the destination of our collections, frequently horticulturally and scientifically important as is Ray’s, will become an increasingly germane topic as we each reach our own destinations.

After seeking advice, the solution Gloria came to was to open the garden to local members one afternoon so they could acquire desirable potfuls at mutually agreed prices. In this way, perhaps 30-40% of the more significant items were disposed of. Of course, not all the autumn bulbs, and few of the spring ones, were yet in growth. Just before the Newcastle Show in three weeks time, some of us will take most of the remnants that are in growth to be sold on the members stand at the Show. Gloria has generously agreed that the income from these will go to the Show. Before our spring show, at Hexham, the remainder of the spring bulbs in growth will similarly be taken for sale. This compromise is not ideal, but it has meant that some of the most important plants have yielded income and will be equally valued by their new owners, while the bulk of the remainder will help the Society and Local Group, and will be available to a wider clientele.

I append, in memory of Ray, a pan of Sternbergia sicula originating on Imittos, near Athens, which has proved to be an early form and is now in full flower. 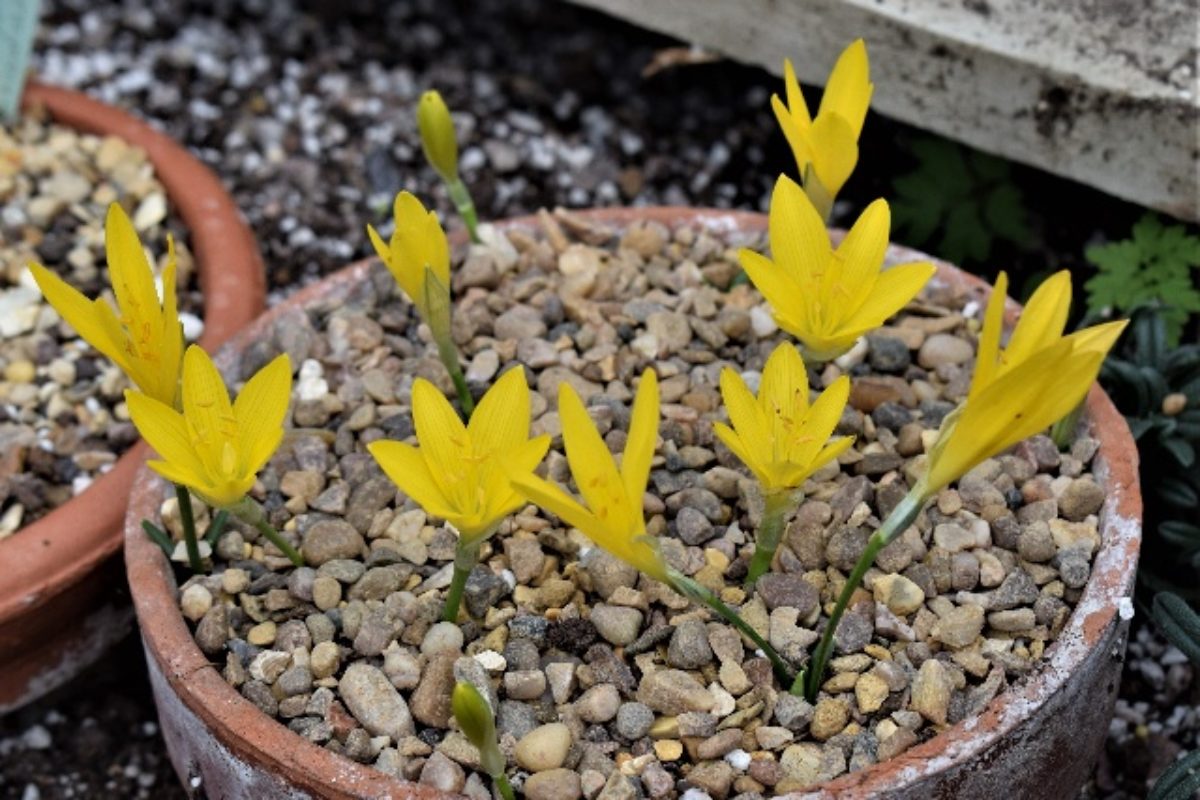 Here is another of Ray’s bulbs, just come into flower today, a form of Crocus laevigatus from Zarakas, inland from Monemvasia. Like most C. laevigatus from the Peloponnesos (and those I found in NW Greece last autumn) is is almost unmarked and very similar to small forms of C. boryi. 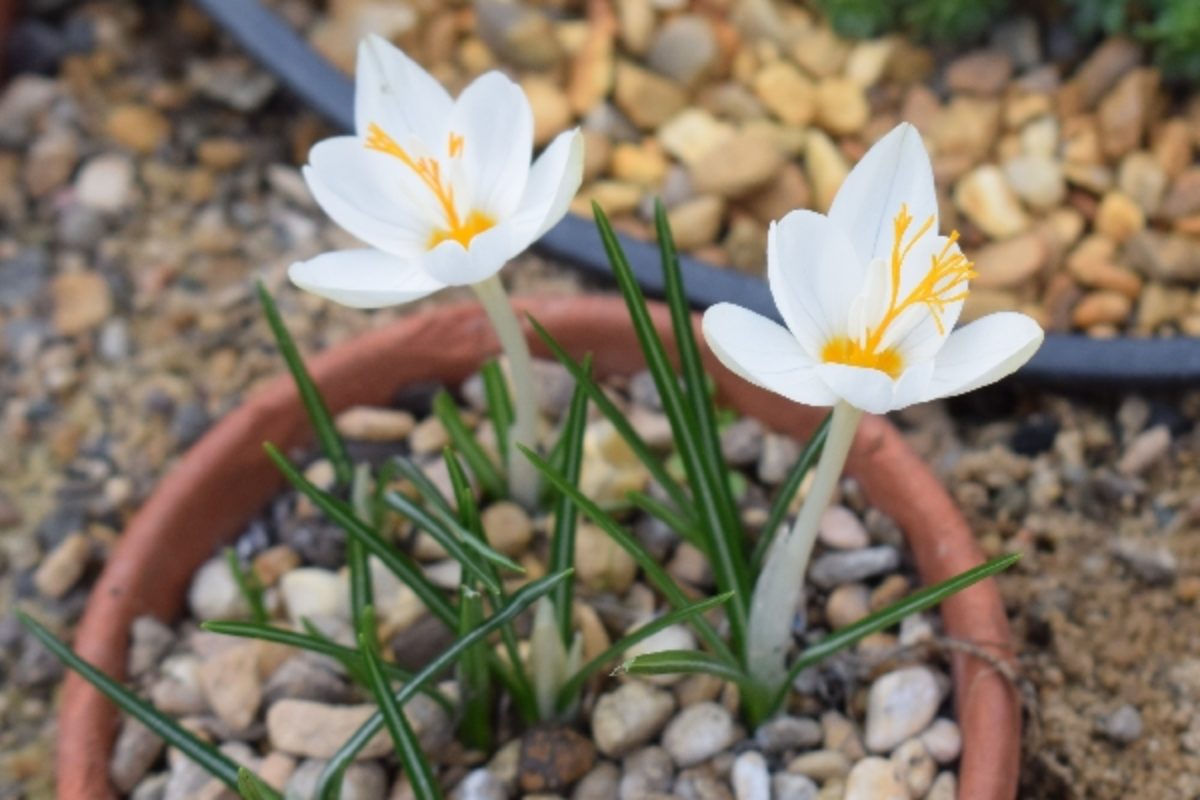 Staying with the subject of autumn bulbs, the first of the autumn-flowering crocus are starting to peep above ground. They seem to vary between years as to which flowers first. This year it is Crocus hadriaticus v. parnassicus. I acquired this a few years ago from Rannweig Wallis.

There are several flowering-size bulbs, so I guess these are seedlings and this one is particularly precocious. This is a rather strange crocus from the plain of Livadia on Parnassos which differs from other C. hadriaticus (including those we saw in the NW of Greece last October) in being completely white-flowered apart from the red stigmas and yellow anthers. In fact it does not really look like the ‘normal’ C. hadriaticus; the stigmas and longer, narrower and floppy, almost like a sativus-type; it also has the look of some C. cancellatus. 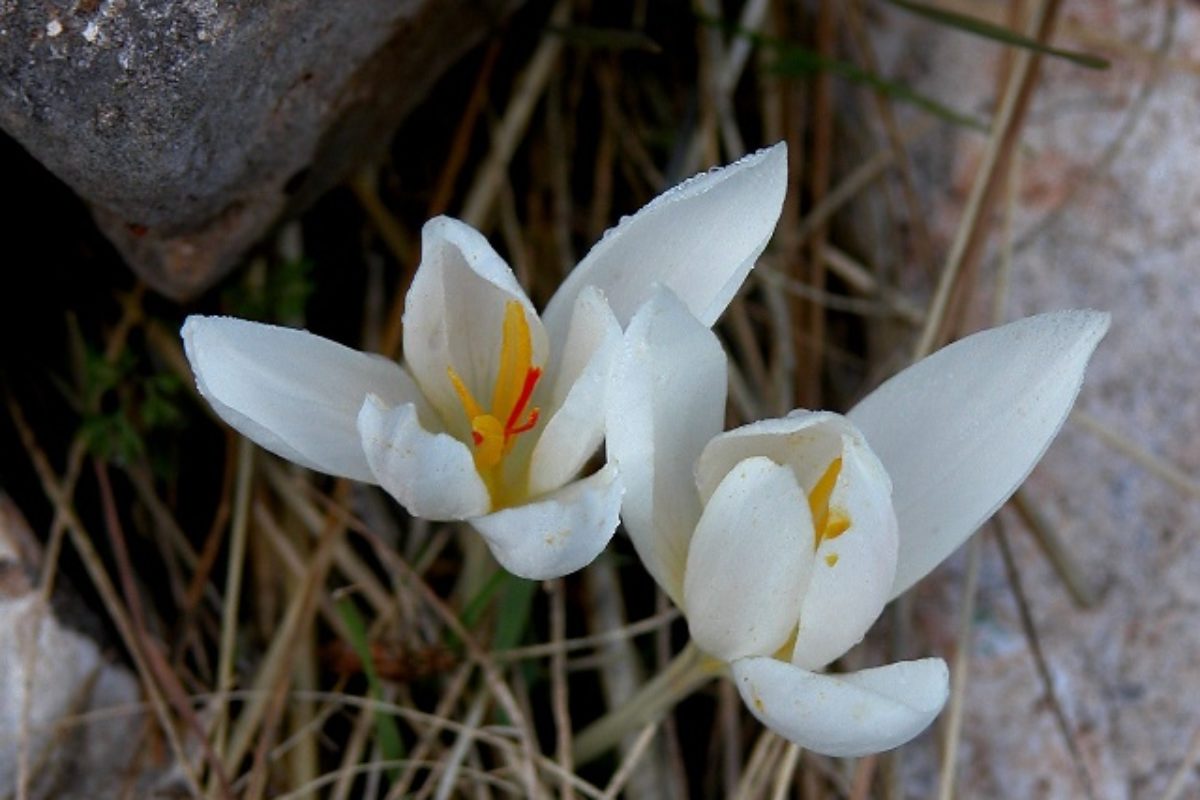 Here is a photo of wild plants of C. hadriaticus v parnassicus on the edge of the Livadia plateau, taken back in 2004.

Out in the garden the colchicums are at their best, still fresh and not yet much eaten by snails or floppy. They look wonderful for 10 days, but are then scruffy and the leaves are a pain for most of the summer. They are all over the garden and as I rework beds, on the whole I am tending not to put them back in. Here are a couple that I have not pictured in recent years, ‘The Giant’, followed by ‘Rosy Dawn’. 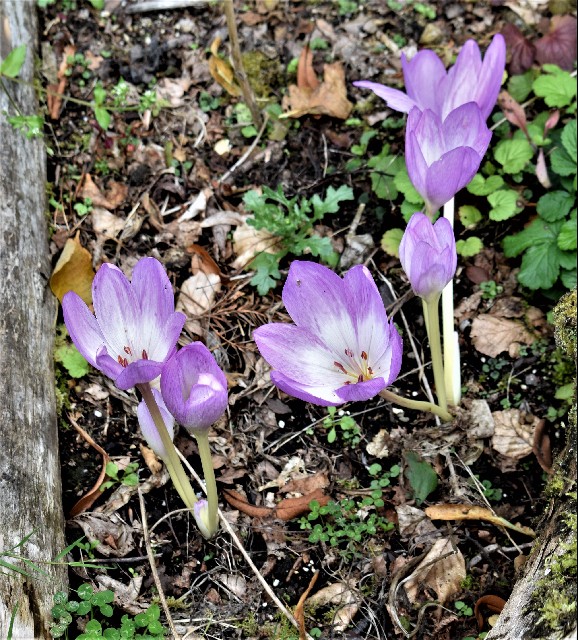 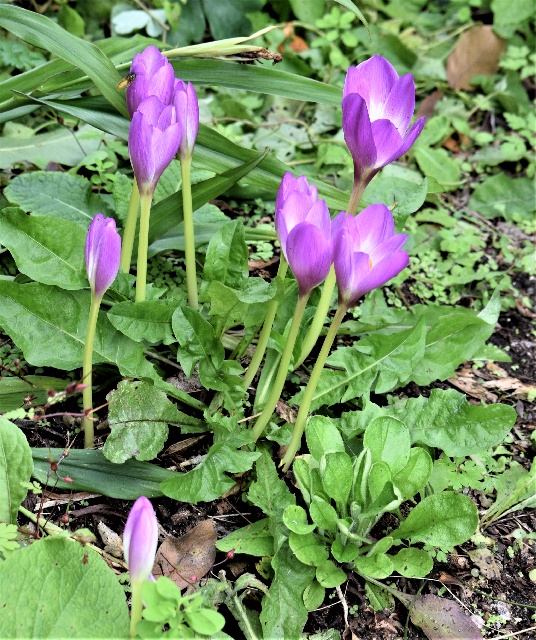 Love the dandelion in the last shot! The colchicums tend now to be relegated to the weedier areas. They are tough cookies.

The heavy work has continued after the fir tree was dismantled and the terrace raised bed extended to where it was. This area is now partly planted (not least with 250 bulbs) and top-dressed with 5 mm gravel.

The bulbs are mostly species crocus and dwarf narcissus, some scillas and puschkinias, bought cheap and in bulk at a local garden centre. 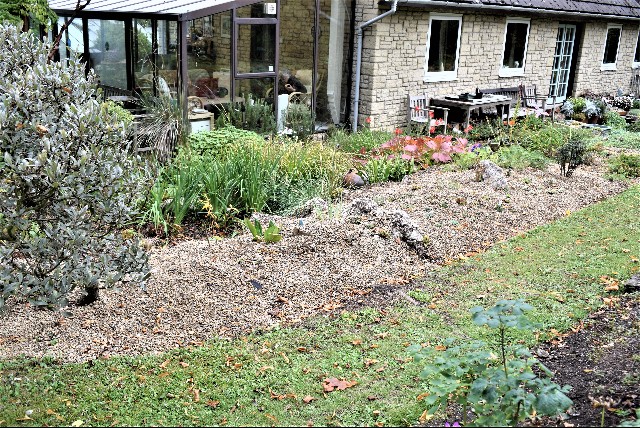 The bulbs are mostly species crocus and dwarf narcissus, some scillas and puschkinias, bought cheap and in bulk at a local garden centre. 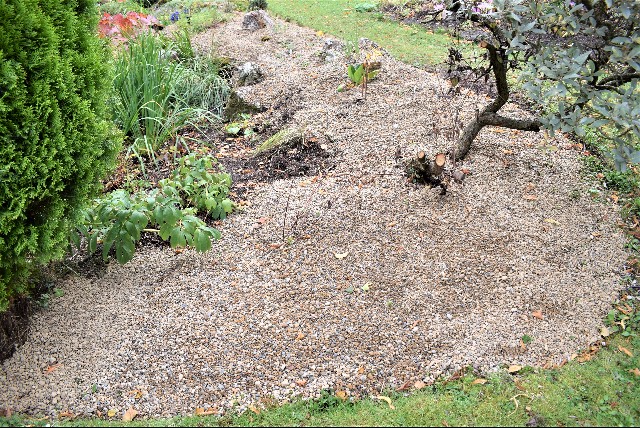 All this entailed the purchase of a dumpy bag of gravel. When finished, at least half was still left, so the front shady scree, now partly home to a collection of Greek foxgloves, was top-dressed for the first time. Here is the same area before and after the top-dressing. 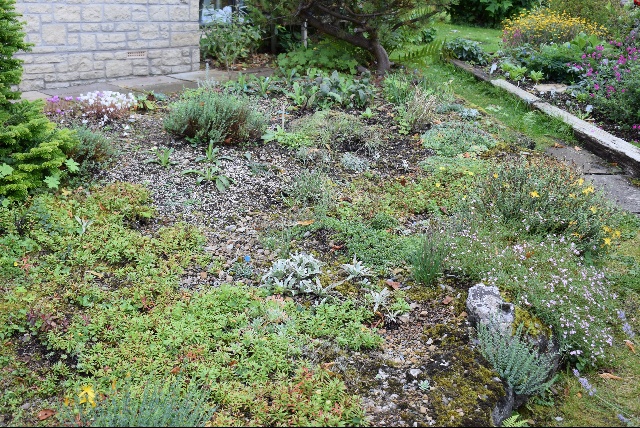 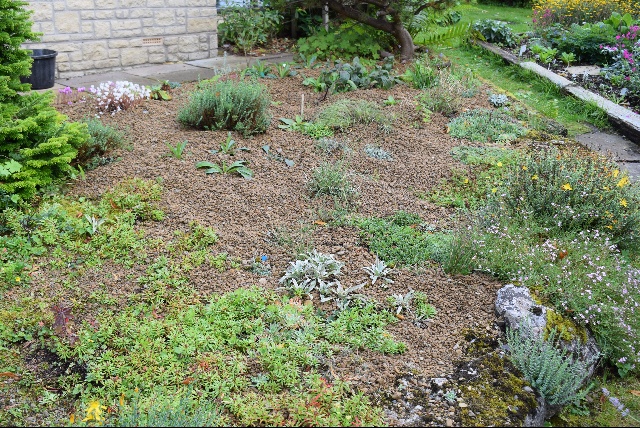 I have also attacked another area which I have been avoiding for some time, namely the northern ‘D’ bed (named for their shapes). This is lovely in spring, solid with snowdrops, then oxlips and other primulas, but it has had too many colchicums, and has been choked with several pestilential weeds, namely oak fern (Gymnocarpium dryopteris), Cymbalaria hepaticifolia and violet (Viola riviniana). Note that these are all potential garden plants, at least as woodland ground cover. Not here they ain’t!

None of this was helping a number of smallish species rhododendrons, which were planted haphazardly so that the planting gave no pleasure. Here for instance is Rh. cephalanthum ‘Crebreflorum’, overgrown with oak fern. 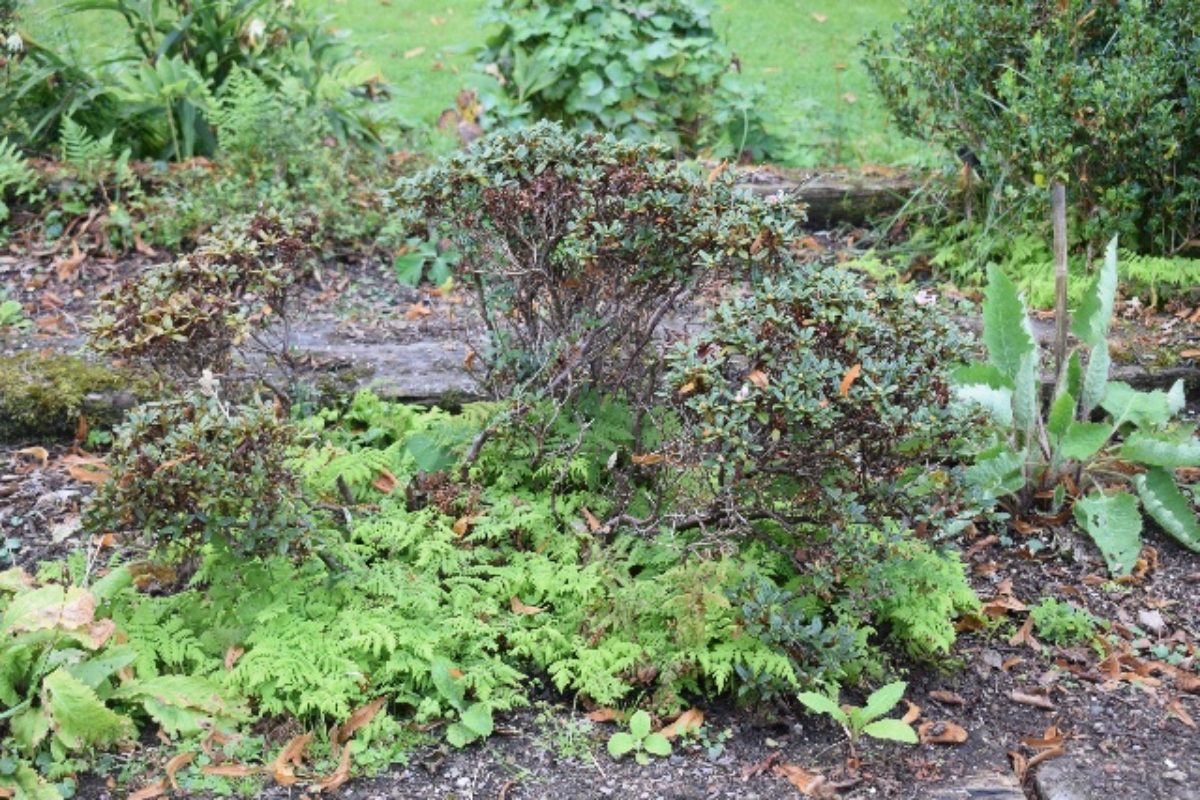 There is only one way to deal with a problem such as this. The rhodo has to be subdivided to a point where one can (hopefully) remove all the weed roots from amongst the root ball. Two points here; this is best done once the soil profile is fully hydrated and the weather has cooled; individual bits of rhodo should, if the root balls are solid and compacted, be soaked out in a bucket of water to make sure that all alien roots are removed.

Often, dividing the rhodo requires a level of brutality. Here the same Rh. cephalanthum is being divided with the use of an axe and saw. 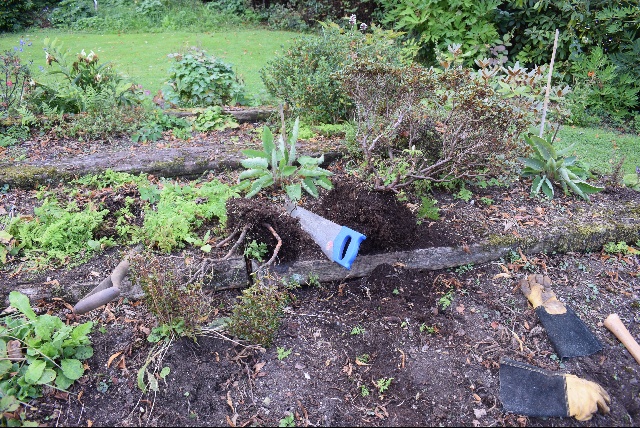 Once the bed was cleared of rhodos, it was very thoroughly forked through to remove all traces of the weeds, and then replanted. By removing clumps of colchicums, foxgloves and lifting dormant bulbs, new planting ground was freed up so that several rhodos (Rh. fortunei, Rh. smirnowii, Rh. calostrotum, Rh. yakusimanum) were brought in to join the rearranged denizens (Rh. haematodes, Rh. ‘Ptarmigan, Rh. ‘Patty Bee’ and others) to form a harmonious whole. This has proved a thoroughly satisfactory exercise and I am happy with this bed for the first time for many years. 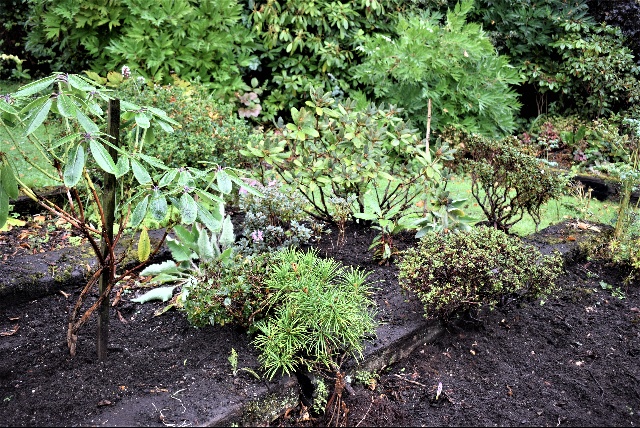 And now, a warning! After all this heavy work my back has complained and I am now suffering an attack of sciatica. We old buffers do need to be careful!

I have been trying to collect some plants which help to prolong the season at this time of year. I seem to have found the right place for Ceratostigma willmottianum. It seems to enjoy sunshine and a well-drained, moisture retentive site, not always easily provided in this garden, and eschews drier more calcareous areas that the popular C. plumbaginoides (ungrowable here) likes. 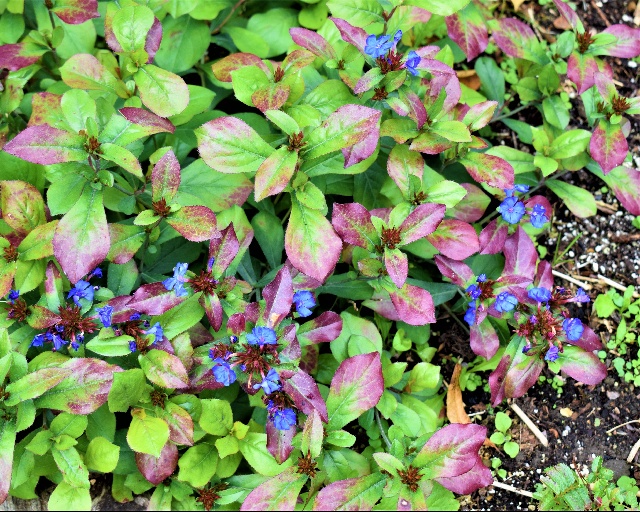 We have had Thalictrum ‘Hewitt’s Double’ for some years now and it goes from strength to strength although it does need staking. It has a very long flowering season. 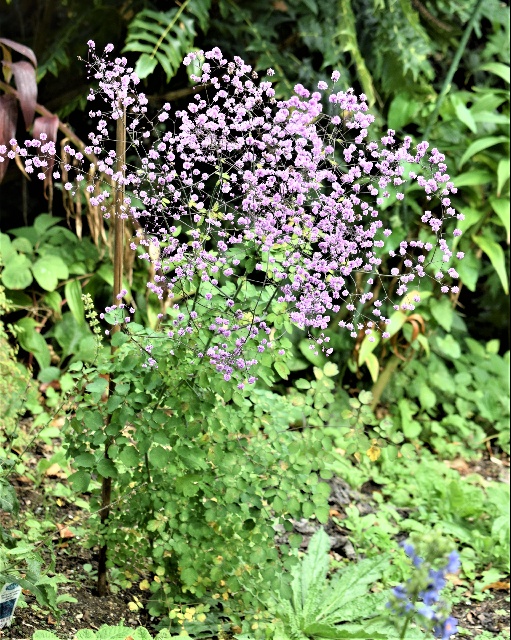 A welcome feature of some daphnes is the propensity to flower a second time in the autumn (indeed D. x transatlantica ‘Eternal Fragrance’ never seems to stop flowering, as the name suggests). I like D. ‘Beauworth’, a hybrid between two very distinguished species, D. petraea and D. jasminea, because it has proved quite easy to propagate, so I now have several, and it survives in the garden. This is a graft onto D. mezerum which has lived outside in a scree for several years. 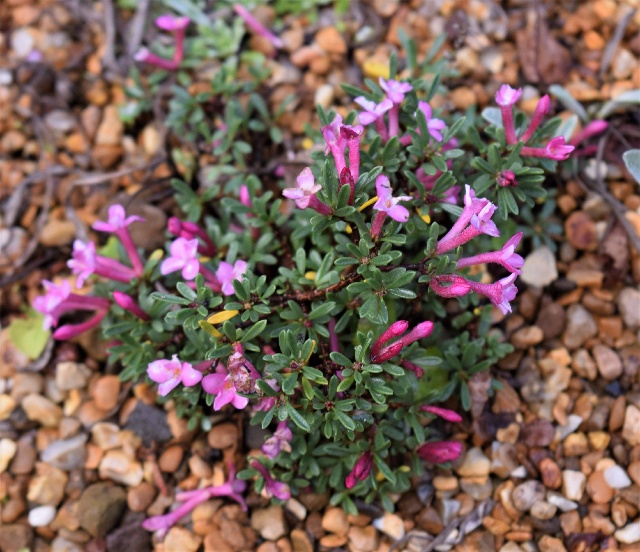 Daphne calcicola is also easily propagated, but I cannot grow it outside, despite several attempts. My plant lives in a pot in the alpine house but is currentlly being kept cool in an attempt to hold it back. 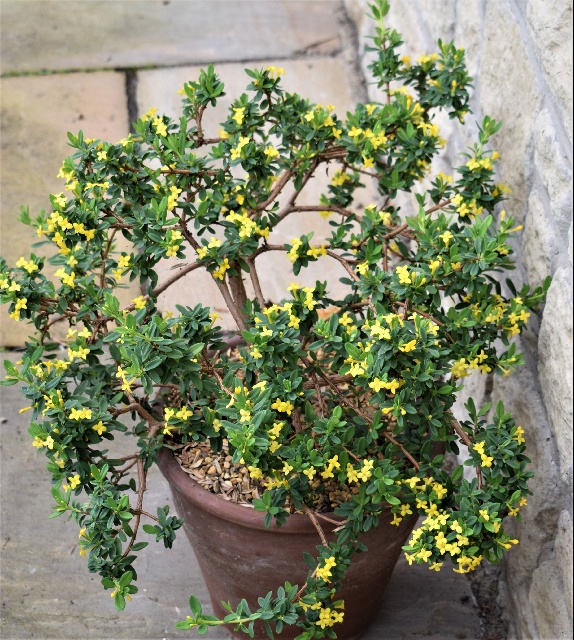 Two foliage subjects to end with. Scarcely an alpine (although I have seen it on the way up many distinguished Chinese mountains), Rodgersia aesculifolia colours so well that we find it totally indispensable at this time of year. 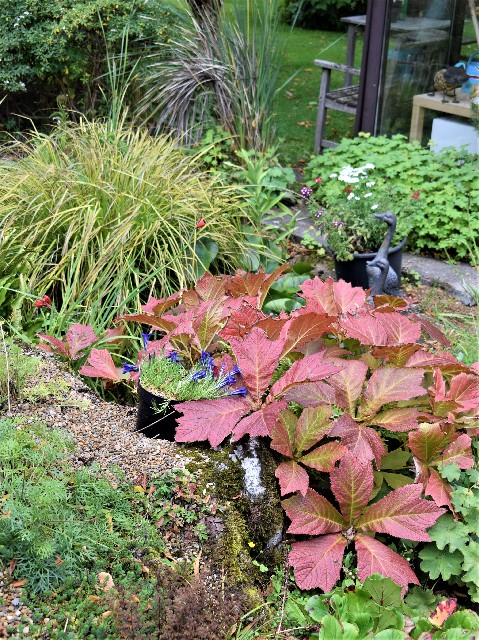 This corner of the raised sand-bed/scree has coped with several celmisias and the combination of C. angustifolia and C. verbascifolia, the latter from wild seed, is pleasing. 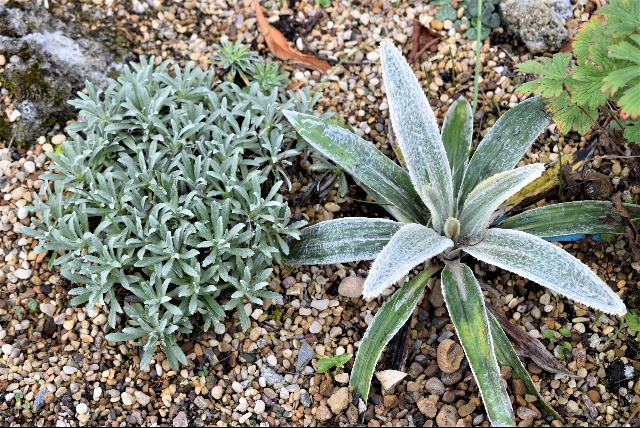