Mostly a mild and very windy month, storm Callum on 12/13 causing quite a lot of (chiefly superficial) damage and piles of debris all over the garden; oh the joys of having lots of large trees in and around the place!

Since we got home from  a cruise to Sweden and the Baltic on 6 October, of which a little more later, I have been trying to catch up with all those tiresome autumn tasks – you know what they are – and in doing so managed to rick my back causing me to be hors de combat for a few days.

Anyway, what of the trip to Sweden? Well, one of the appeals of the itinerary was a visit to Gothenberg and the chance of a ‘flying’ visit to the botanic garden and its highly regarded rock garden. Of course, you who know the place will realise that the RG is located at almost the farthest distance from the entrance and it took us 15 minutes each way (with stops en route to look at particular plants that took my fancy). But on reaching the steep bank on which the rock garden is located, much of the structure being splendid, unaltered, glacially scraped granitic bedrock outcrops, very like those we have in the N. Wales mountains near where I live, I was staggered by its extent and the quality and variety of the planting. I wish I had had more time to look into the latter in more detail but I didn’t so resolved to make a special visit some time in the not-too-distant future, and in spring when it would surely be a joy to behold.

At this time of year there were not a lot of plants in flower and the highlights for me, as expected, were the huge mats of glossy-leaved shortias festooning the rocks, something which I had heard about but never witnessed before. As one who has loved the genus and struggled for more than 40 years, in various gardens, to grow the odd miserable clump of a few species, and spent a fortune trying to do better, this was a humbling experience. If you have similar clumps to those shown below growing in your garden, congratulations, I take my hat off to you, but I’m not sure that I want to know about it! 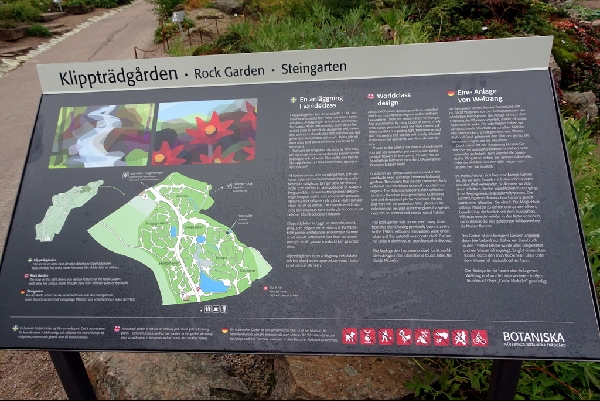 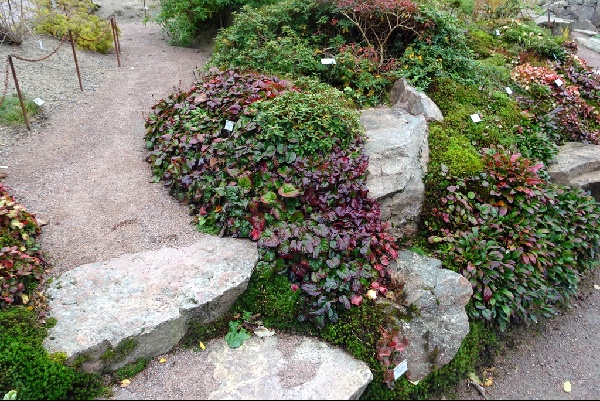 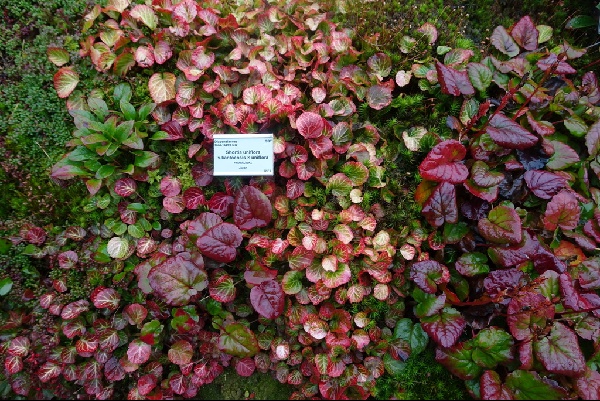 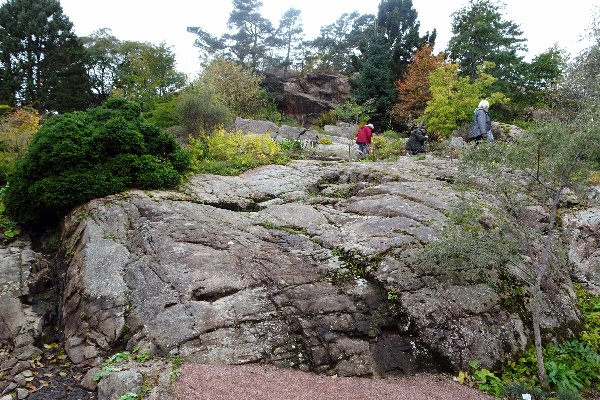 Some plants, including spring trumpet gentians and Daphne caucasica, are flowering again after this unusual season, the gentians just a few flowers but the daphne, as the photos show, at least as floriferous as at any stage during the summer. Add to them the splendid Nerine alta, which always flowers in October here, and you have quite a reasonable show, augmented of course by the year-round flowering Erigeron karvanskianus.

Pineapple family (Bromeliaceae) member Fascicularia bicolor, now >20 years old, also adds considerable interest with its duck-egg blue flowers nestling deep within the blood-red, spiny rosettes. As I have reported here previously, this can be divided in spring, preferably with some roots to each division, which root best in pure sharp sand kept just moist – too damp and they will rot off. 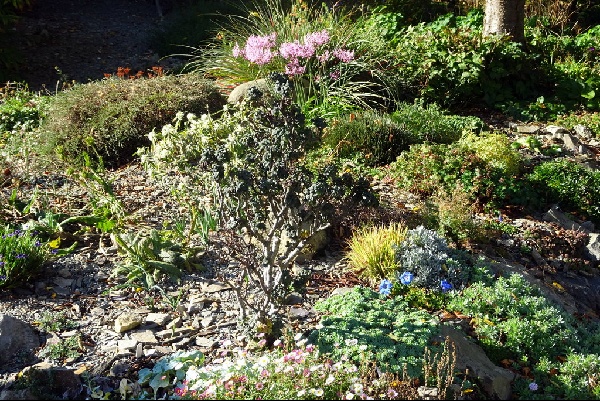 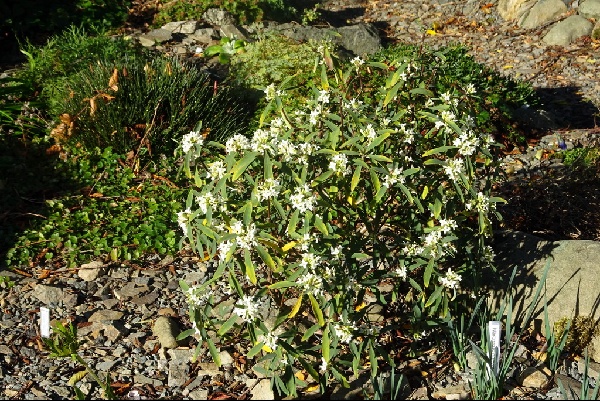 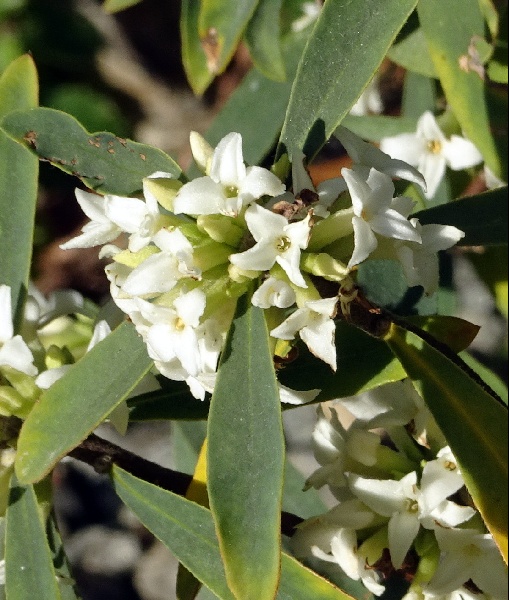 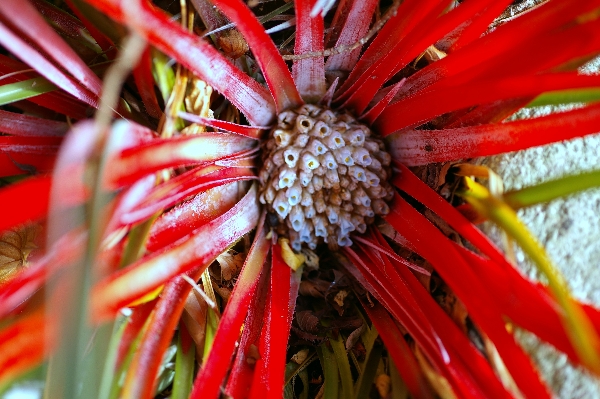 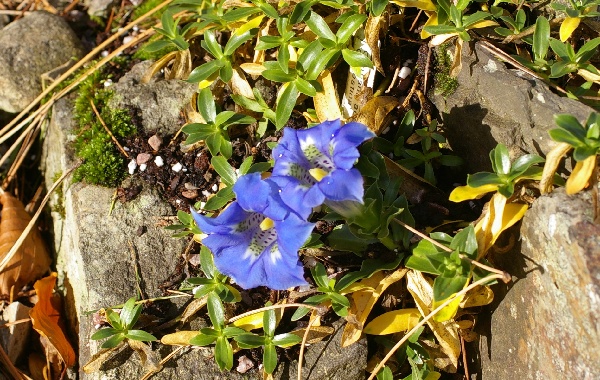 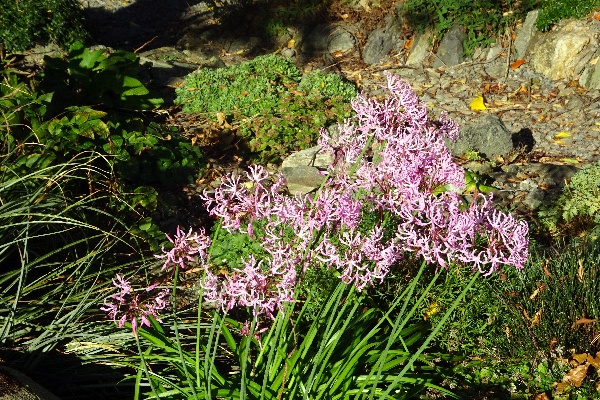 Several spindles give pleasure at this time of year, mostly for their scarlet fall foliage, but in some cases the fruits are also well worth waiting for.

Euonymus cornutus ssp. quinquecornutus, a gift many years ago from the late Joan Wilder, whose lovely garden and nursery near Tewkesbury some of you will remember, is still only 1.5m x1.5m but bears its five-horned ‘jester’s hat’ capsules with dangling scarlet fruits in some quantity. It comes easily from seed but will not flower for a few years.

Also good for its fruit, but better still for its foliage, is E. latifolius. Mine has a climbing monkshood (Aconitum hemsleyanum) growing through its branches, which works quite well.

Finally, another small spindle, this time from the John Noakes stable and as far as I am aware unlabelled (?), which is a brilliant scarlet as I write. 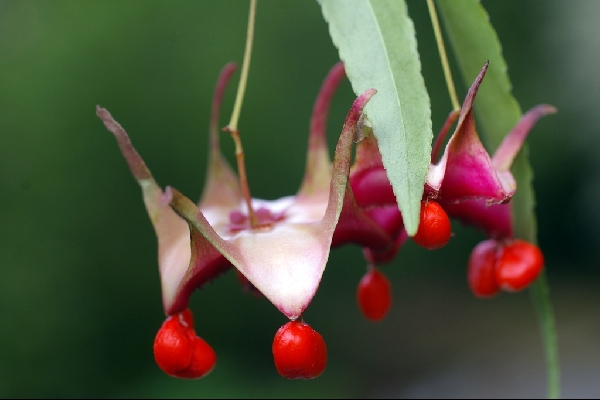 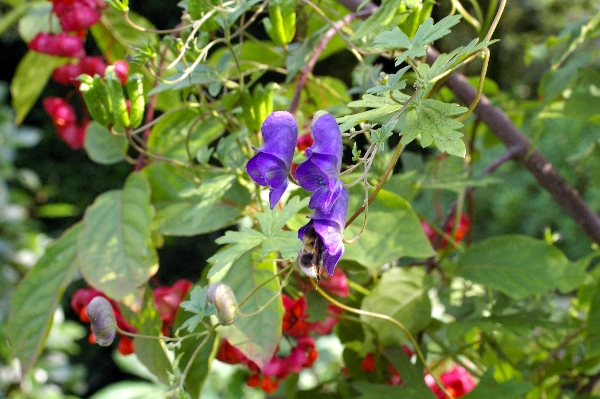 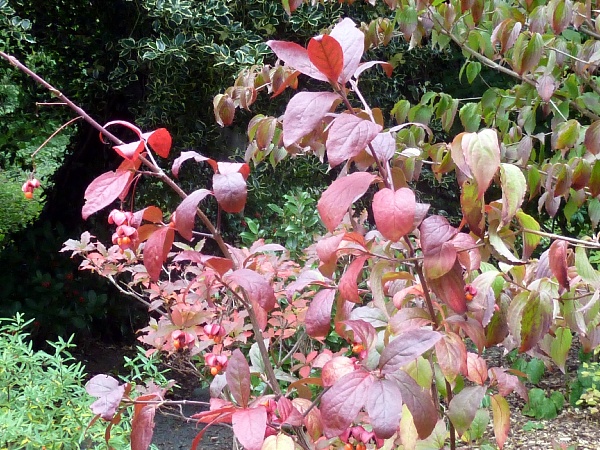 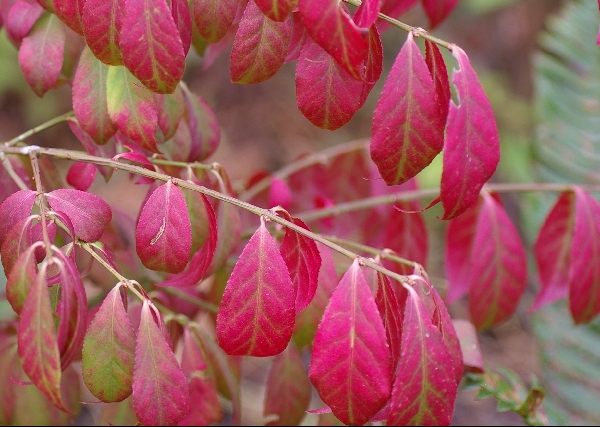 Every year I grow a few non-hardy climbers, often from seed, and this year I gave had reasonable success with perhaps the most impressive, Cobaea scandens, (common names ‘cup-and-saucer vine’, ‘cathedral bells’). If the large seeds are sown with warmth in February and the seedlings potted on regularly until they can be planted out after the last frosts, they will easily make 5m in the season, hopefully beginning to flower in early August and carrying on until the first severe autumn frost. The flowers, which are very large, open pale green-white gradually changing to purple as they mature. I was surprised to learn that this most un phlox-like plant from Mexico is in fact a member of the same family – Polemoniaceae.

Most people when  they think of mandevilla think of the red, pink or white-flowered varieties of Mandevilla x sanderi, which is a very popular conservatory plant originating from Brazil.

Much hardier (it survived the cold blast at the end of last winter in my unheated alpine house) is M. laxa, also from S. America. It grows vigorously for me and when it produces its clusters of very sweetly scented pure white trumpets it is a real joy. Seed is generally set and is easy to germinate. 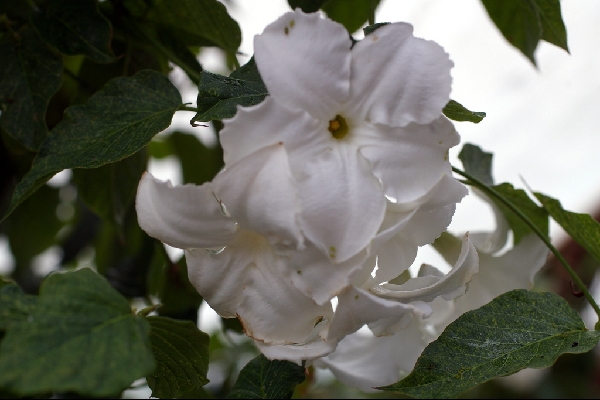 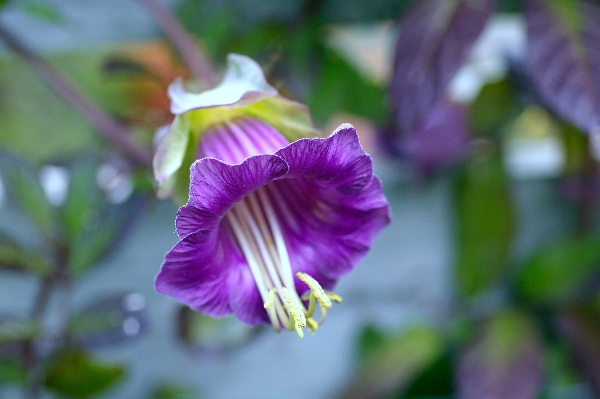 This pretty little plant, which flowers on and off for most of the year here, seems to be uncommon, but I don’t know why. I have the pink and white forms courtesy of William Purvis who obtained them from Henry and Margaret Taylor; can anyone enlighten me on its origins? I have it growing in raised beds in full sun, which it seems to like; its one Achilles heel is that molluscs love it! 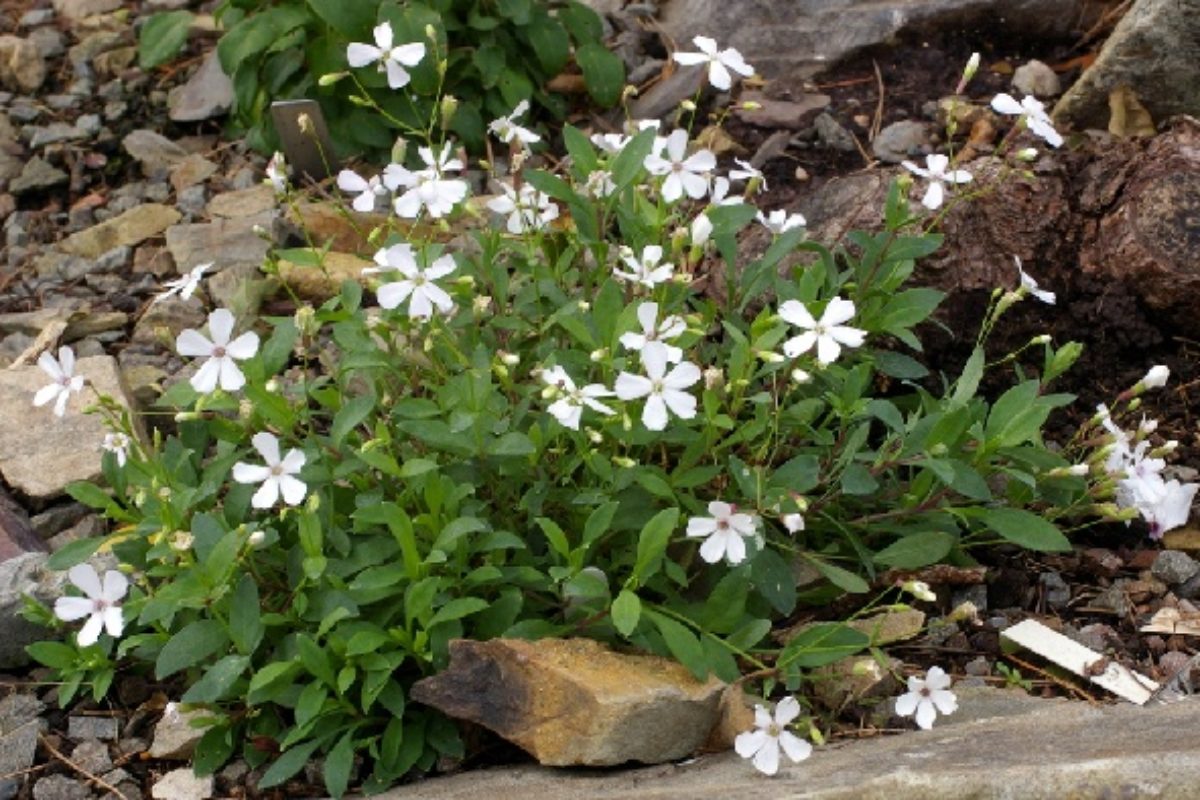 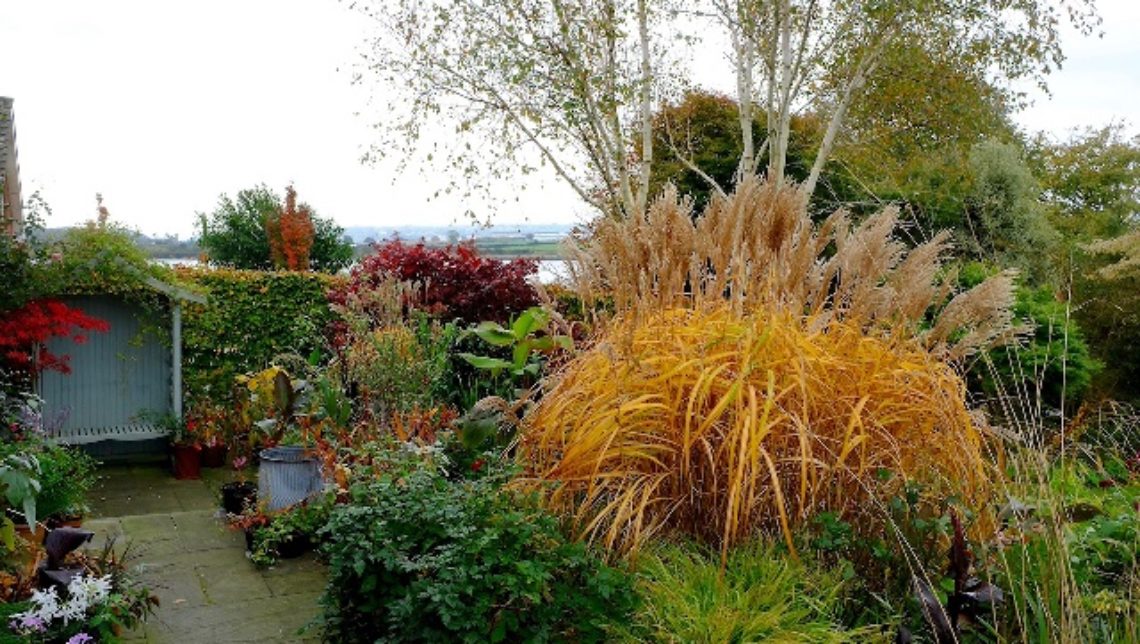