We had planned to revisit Parga in NW Greece in the second half of October, trusting that a wetter cooler autumn would yield more discoveries of autumn bulbs after our successful trip last October.

Sadly, I tore a hamstring 10 days before we were due to leave. For a number of days I could only hobble a few yards on crutches and a visit to Casualty gave the advice that I would unlikely to be very mobile before our travel date. Bearing in mind the miles one is expected to walk in airport terminals these days, we decided to cancel. As it happened the muscle mended faster than expected, and despite some sciatica, we could in fact have probably travelled without undue difficulty.

Thus it was that we sought a late autumn holiday date at very short notice, and settled on a JET2 package to the Hotel Sis Pins in Puerto Pollensa in NW Mallorca, where we spent 11 enjoyable days. We have visited this resort twice before, once indeed in mid-autumn 2007 (contribution no. 53), about a month earlier than this visit. We would heartily recommend the company, resort and hotel; it is one of our favourite areas with good plants in spring and excellent birding. Even in early November we were treated to superb views of specialities such as Marbled Duck, Purple Swamp-hen, Audouin’s Gull and Crested Coot. Although our first five days were mostly wet and we were thoroughly drenched on two occasions, the last week was mostly sunny and became pleasantly warm.

As I say, Puerto Pollensa is ideally situated both for the spectacular mountains and cliffs of the Tramuntera in the NW of the island, and for the large swamp lands of the Albufera and Albufereta in the NE. We also visited the limestone peninsulas of Alcudia and Arta which were new to us. We also discovered an excellent bird reserve right in the centre of the town, next to the Eroski supermarket, where we saw Mallorca’s second Red-flanked Bluetail, Red-crested Pochard and Zitting Cisticola (below). 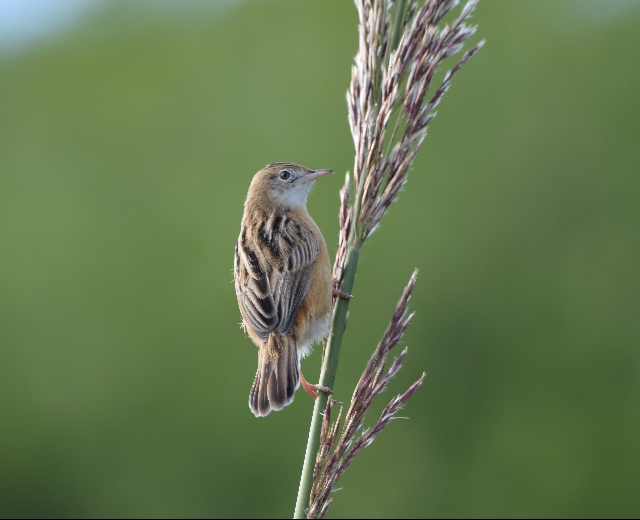 No, I know, this is not a bird forum, so I shall add a photo of the base of the Formentor Peninsula from out of our hotel window, before proceeding with some of the plants we saw. 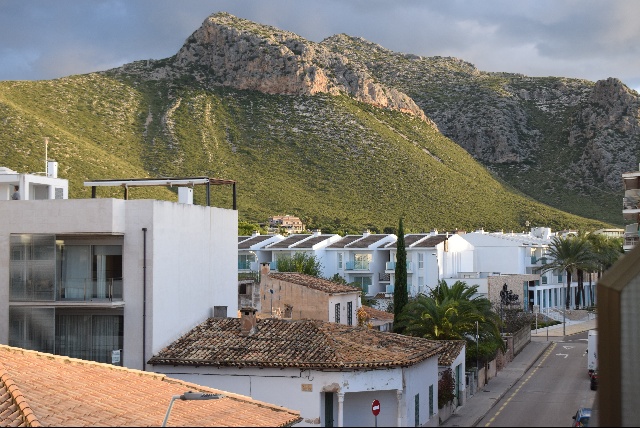 Mallorca is not noted for its bulb flora (the orchids are quite good) and unlike some other Mediterranean islands, the bulb enthusiast will be disappointed by the lack of geophyte diversity in the autumn. However, it does boast one lovely, endemic, autumn crocus, C. cambessedesii. We did find this in 2007, twice, and in retrospect would seem to have been very fortunate in late September. In the first week of November it is locally common and widespread and we found it in some quantity on the Arta and Alcudia peninsulas, in several places on Formentor, around Sa Calobra and also to the north of Selva. It seems to be very catholic in its requirements and we found it from sea-level to 900 m asl, in deep soils, and in tight crevices, on exposed cliffs and shady woodlands, on the flat and peeping from vertical sites, but always on the limestone.

C. cambessedesii is also a very variable species. It is invariably synantherous (leaves with flowers) and the 3-6 leaves are extremely narrow and dark green. The corm has a highly fibrous tunic. It is one of the smallest crocus, but the floral tube is very long (and usually but not always very narrow). The flowers are always feathered externally, but the feathering varies in colour and extent and the ground colour of the outers varies from silver to buff. Inside, the perianth varies from white through lilac to a pale blue. The anthers are yellow and the rather short, three-lobed stigma is blood-red. In all these forms it is always (in my biased view) very lovely. I suspect the reason we see it so rarely in cultivation is that it normally flowers too late for the autumn Shows. 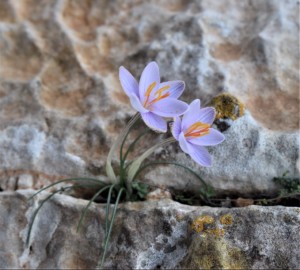 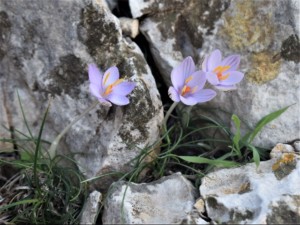 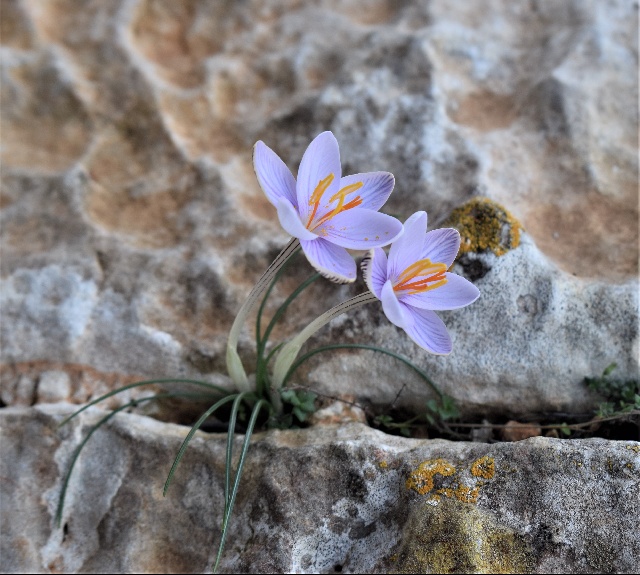 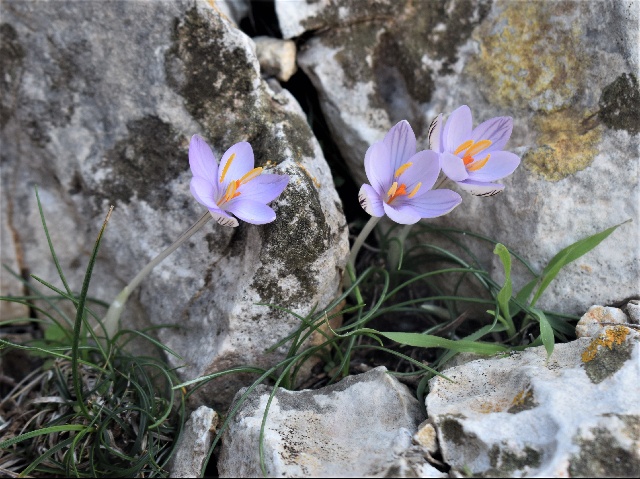 A form from woodland above Selva. 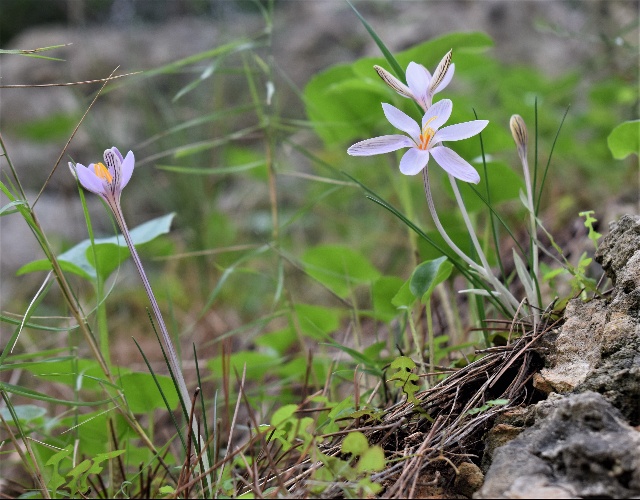 A white form from a shady site on the Fornmentor Peninsula. 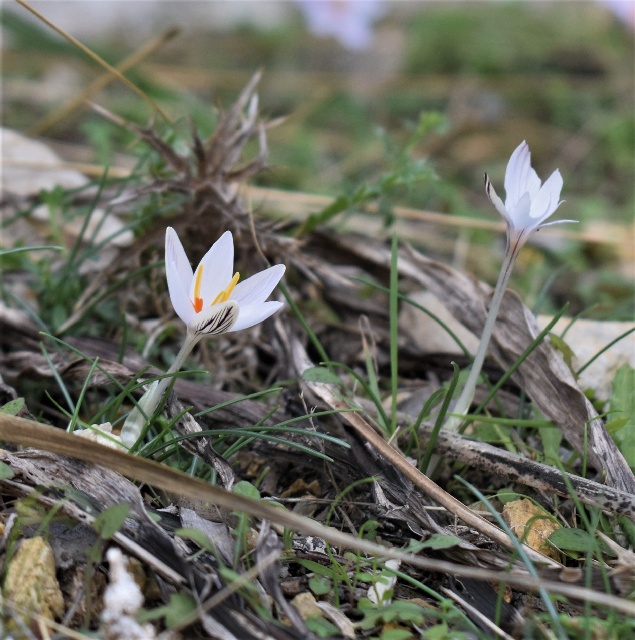 And a particularly elegant well-marked form from the Alcudia peninsula. 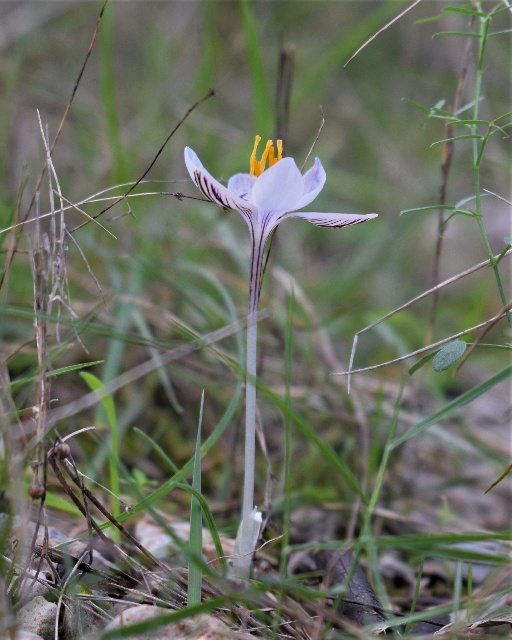 The only other autumn bulb we found was a very moth-eaten form of Colchicum (Merendera) filifolium on the Arta peninsula. We saw this much better in 2007 and is pictured in issue 53.

Aroids are extremely conspicuous on Mallorca. Arum italicum and Helidiceros muscivorus were not in flower, but the ground is carpeted with Arisarum vulgare over much of the island and in places it was flowering freely. 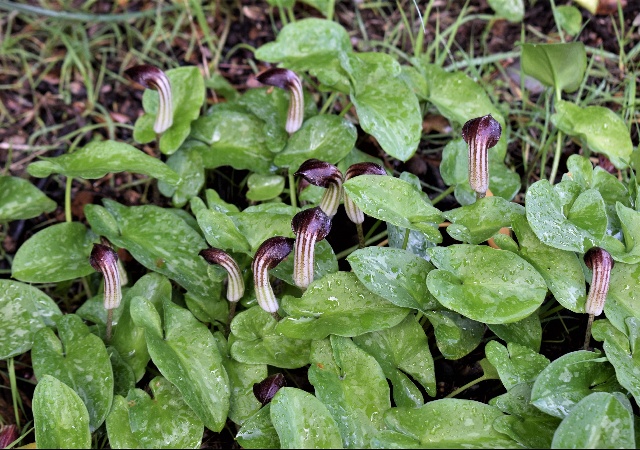 Also, remarkably common on the limestone throughout the Tramuntera, but mostly finished flowering or sterile was the spectacular Arum pictum, increasingly shown as a foliage plant in our Shows. However, along one lane in the Formentor Peninsula, a number were still in flower, including this remarkable bicoloured form. 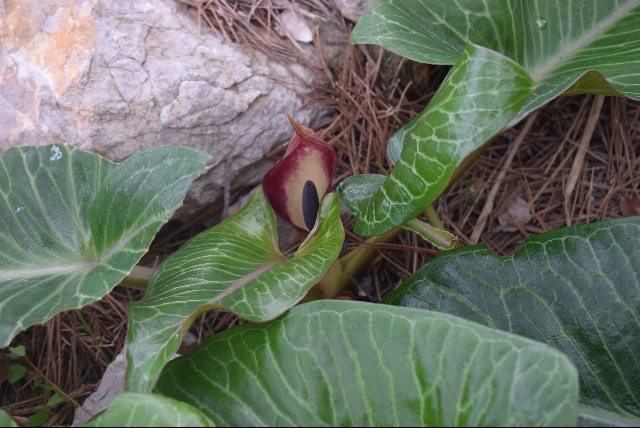 Others were of the normal dark purple. 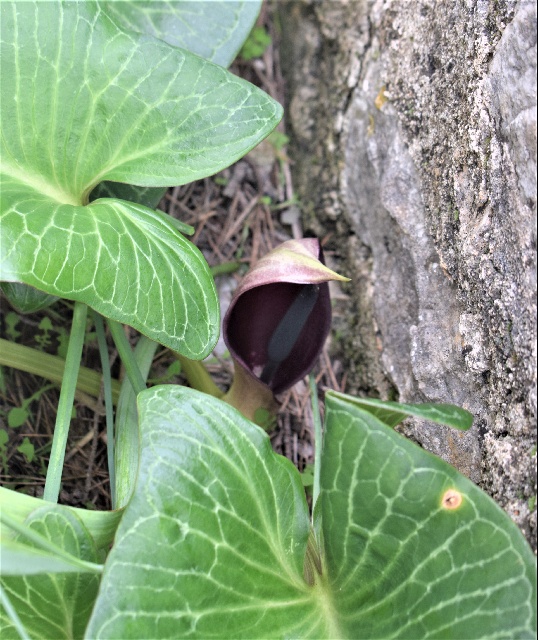 Not surprisingly, the Balearics have many endemic species, found nowhere else. As the largest island with the most varied habitats, many are restricted to Mallorca, but a number of the endemics, for instance the spectacular and popular peony, Paeonia cambessedesii, are found on two or more islands. In total there are about 65 endemic species (and many more subspecies and varieties), about 5% of the total which, compared say to Crete or Cyprus at 10-12%, is a rather low proportion. Quite a large number more (for instance Arum pictum) are ‘Tyrrhenean’, that is confined to the west Mediterranean islands (including Corsica, Sardinia and Sicily). Others again are common on Mallorca but rare on the mainland, for instance Cyclamen balearicum.

Many of the endemics belong to one of two life forms, small creeping herbs of shady limestone cliffs, and prickly shrubs of exposed headlands. On the Formentor Peninsula in particular (the tunnel mouth is a good location) several of the former group were conspicuous and still in flower.

Perhaps my favourite plant in this group is the unlikely, pink, groundswell, Senecio rodriguesii, a real cutie. 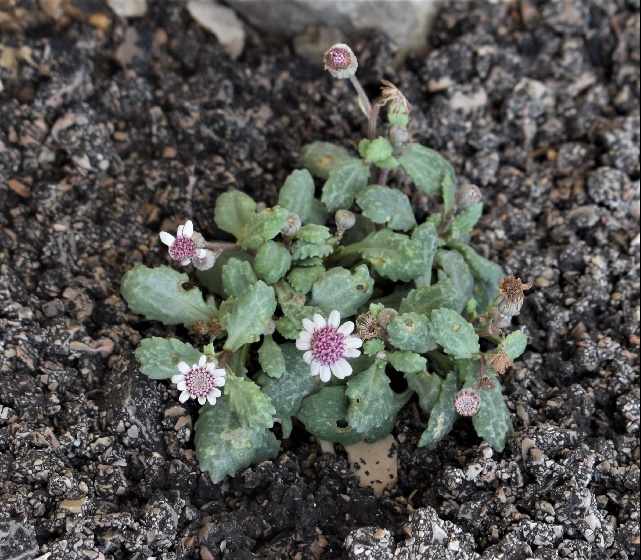 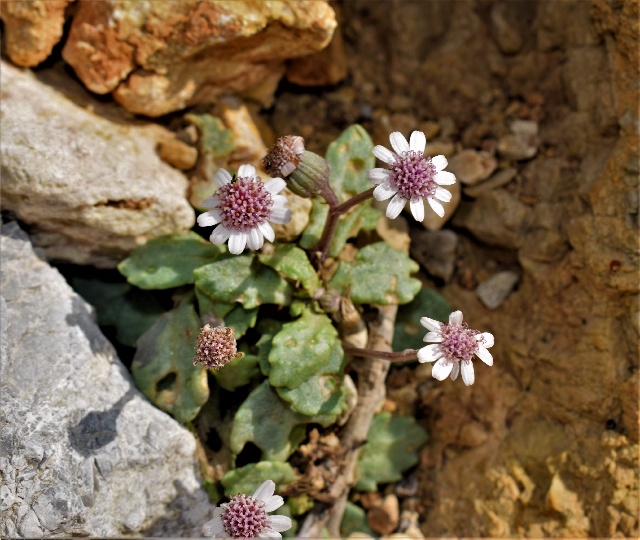 I featured the endemic Erodium reichardii in 2007 when it was flowering rather more freely. Here it is again. It is grown sometimes but is not very hardy, but has been used for hybridising, as in E. x variabilis ‘Roseum’. 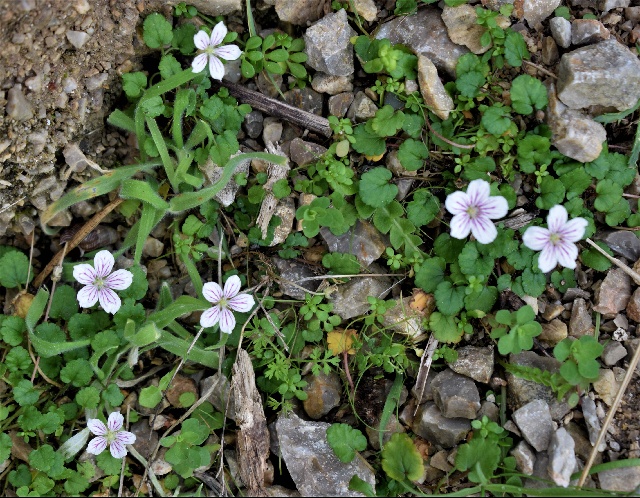 Another member of this association, Cymbalaria aequitriloba is not endemic, but one of the ‘Tyrrhenians’. 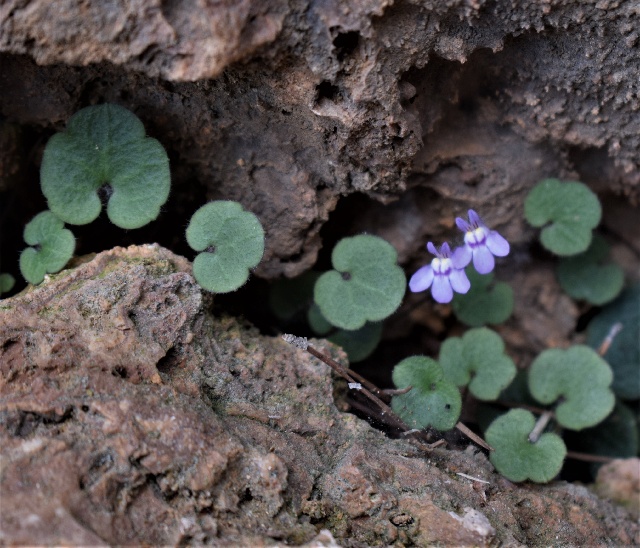 The ‘spinies’ show a remarkable degree of convergent evolution, so that members of the pea family (Astragalus balearicus, Anthyllis hermanniae, Genista tricuspidata), mint family (Teucrium subspinosum, much loved by cats), daisy family (Launaea cervicornis) and asparagus family (Smilax aspersa var. balearica) have all evolved the spiny cushion habit on exposed headlands and cliffs. None were flowering in November. Here is the Launaea which is a type of specialised sow-thistle. 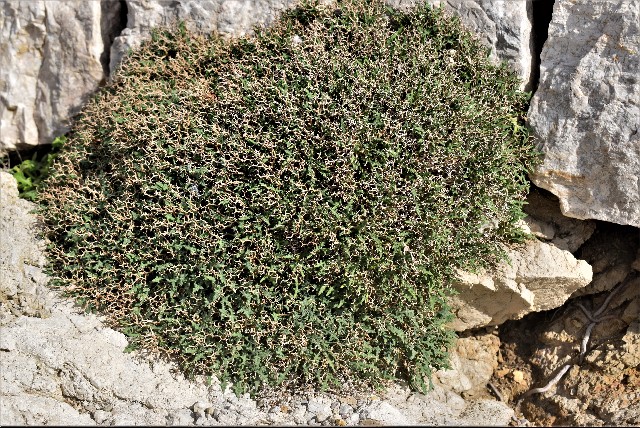 The best place to see the ‘pricklies’ is undoubtedly the northern tip of the island, Cap Formentor, which also has spectacular scenery. 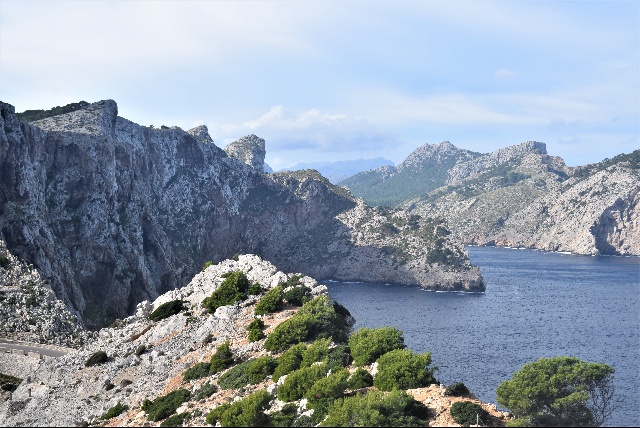 On the cliffs here, amongst the pricklies, are the most fantastic cushions, quite the equal of any dionysias. Remarkably, these are an endemic sea-lavender, Limonium caprariense, and some bore a few small lilac flowers as a proof. 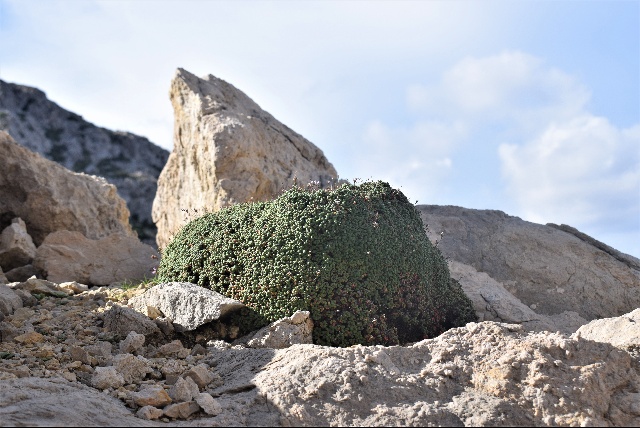 Dwarf deep blue forms of rosemary are also typical of this habitat. 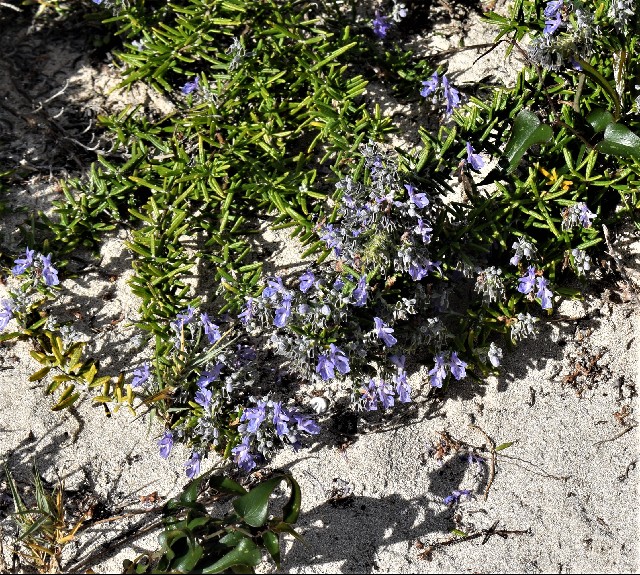 Smilax aspersa, the Sasparillo, is mentioned above for its leafless, ‘wire-netting’ maritime variety. However more conventional forms are common throughout the island. This is one of those plants, like arbutus (also common here) which flowers in the autumn and fruits a year later. Also, it is not often realised that, like the Asparagus species in the same family,  it is dioecious. Here are photos of the male followed by the female. 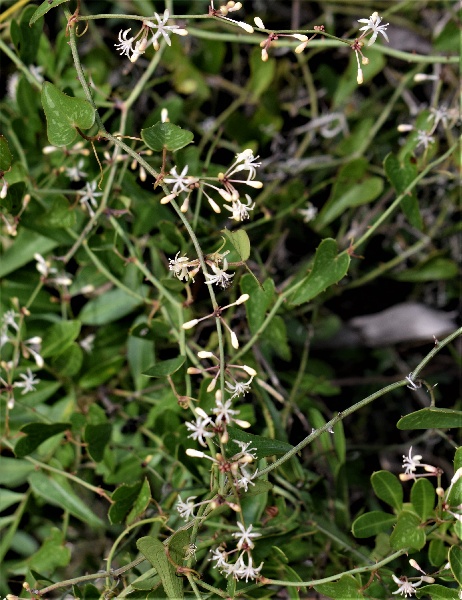 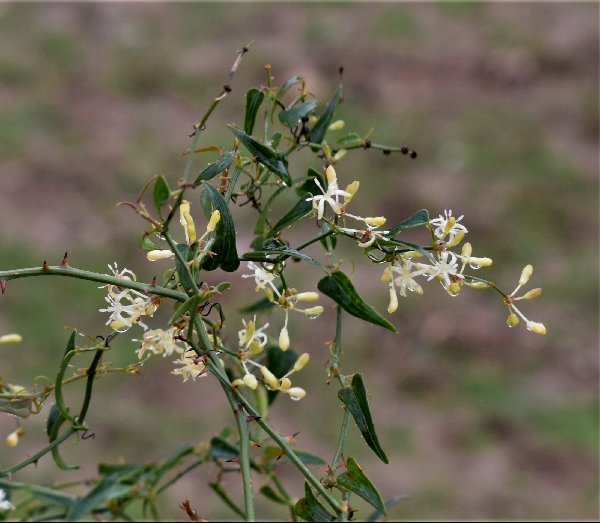 Speaking of climbers, we were delighted to find Clematis cirrhosa var. balearica just coming into flower above Selva. This form, typically flowering at Christmas in the garden, gave rise to the popular cultivar ‘Freckles’, and is so distinct it might be regarded as yet another endemic species. 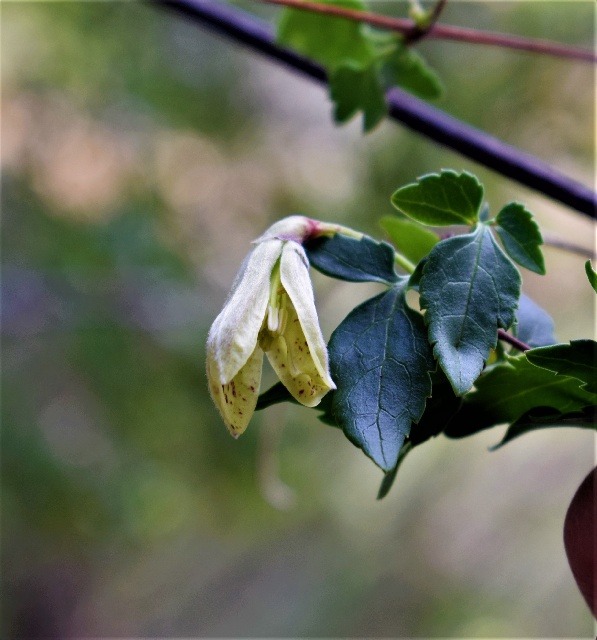 Clematis flammula also sometimes flowers in the autumn, as here on the Albufera. 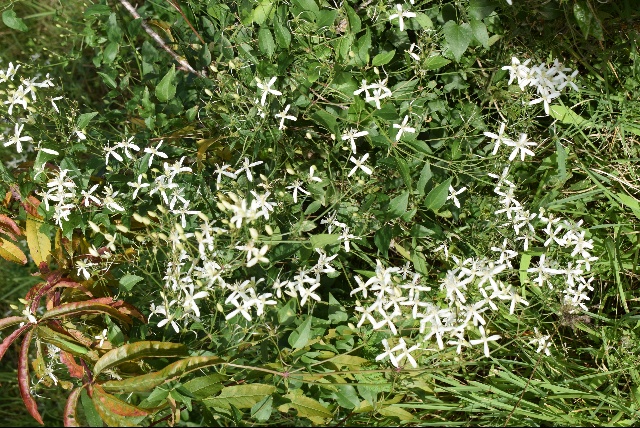 I could spend some time discussing the fascinating plant communities of the extensive dunelands between Alcudia and Can Picafort, but will restrict myself to one species, the very odd autumn flowering Viola arborescens. This is a local plant of maritime localities in the west Mediterranean which was new to me. Superficially, it looks like a stock! 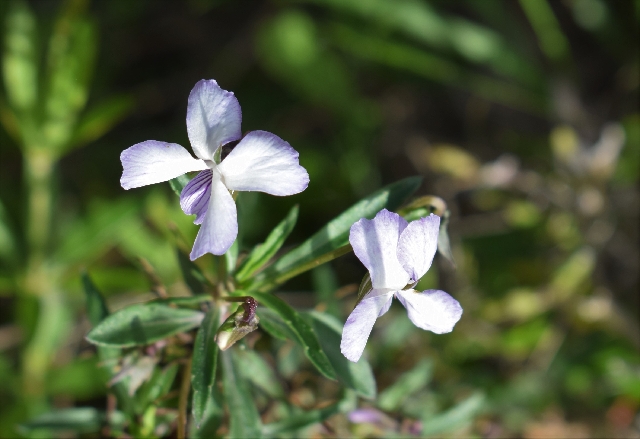 And, like Captain Noah, lets end with a rainbow!! 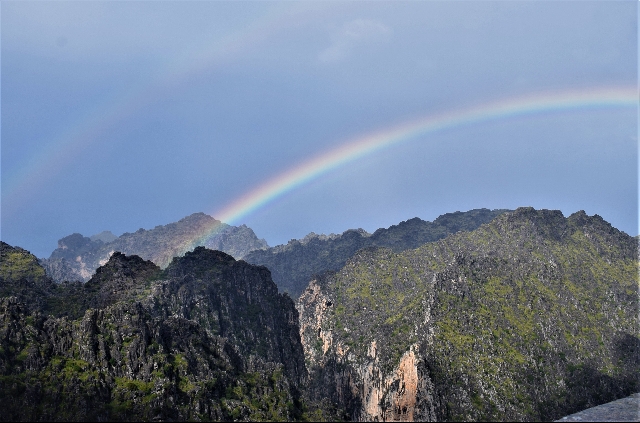