Well here we are, the August doldrums (or indeed monsoon) are past, the air is fresher, the nights are nippier, the light strikes the garden from a lower angle and the berries are ripening. Weeds are dying back and the cyclamen and colchicums are starting to flower (rather late this year). I am fond of the autumn, one of the most interesting periods in the garden, overshadowed only by the onset of winter.

Mandy, who helps with our hedges at this time of year, said this week; ‘one of the things I like about your garden is that there is always something of interest’.

This put me in mind of John Hall of Felton in the north of this county, a grand old Northumbrian, who had a magnificent garden on the banks of the Coquet. He was an old man when I knew him nearly half a century ago but nowhere yet near his own eventual century. He took me aside one garden visit and said; ‘the secret of this garden is that I have tried to make it equally interesting at every time of year’, and in that he largely succeeded. This philosophy stayed with me and if the garden is rarely sensational, then, again, it is not often boring.

Also, I do strive for the unusual. Here is an oddity which I found on a Hexham Market Stall (‘Pennine Plants’ I think), of which I had never heard. It has now come into flower. Although reminiscent of a penstemon (and sometimes called the ‘Japanese Penstemon’), Chelonopsis yagiharana is in fact classified in the Lamiaceae family. Said to be soundly perennial and completely hardy, it also has the reputation of being fiendishly difficult to propagate as it does not come form cuttings and rarely sets seed. Quietly interesting at least. 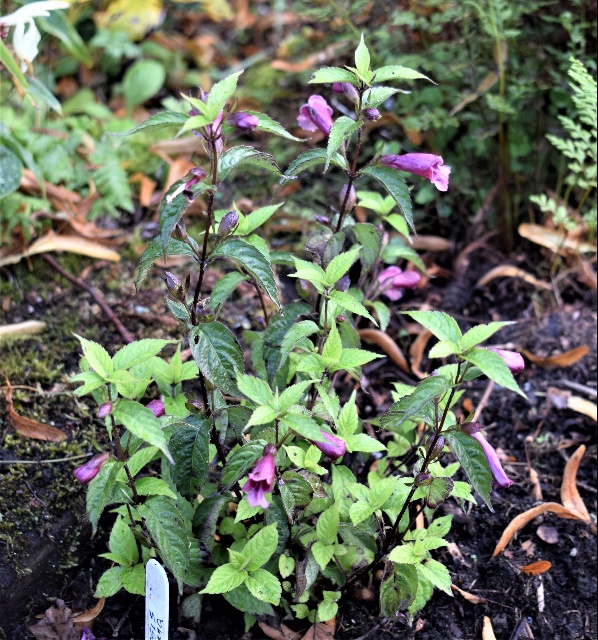 Nearby, in one of the so-called ‘D’ beds, raised and in semi-shade with a compost and leaf-mould soil, Actaea pachypoda is another quirky plant of the type I value. It is of very little garden interest until the berries ripen, but these last for a month or two and are exceptionally decorative in a very unusual way. Although the foliage, which dies down completely, is fresh and green through the summer, the main drawback of this plant is that the leaves become marked and spotted by the time the berries are showing. Presumably, it is as poisonous as its rare British native, so accurately called ‘Baneberry’. 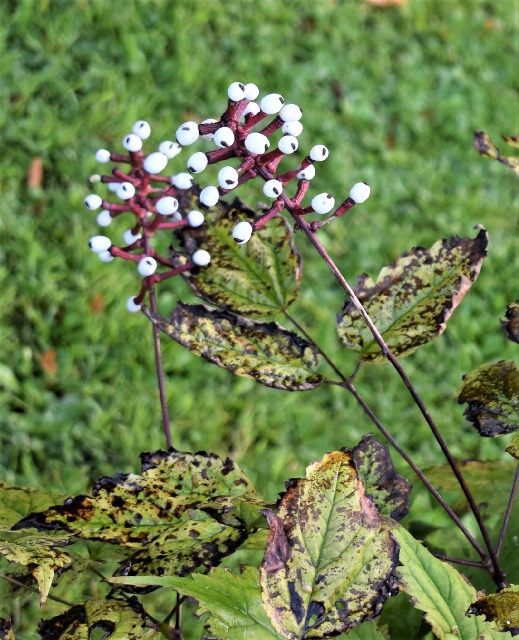 Staying for a moment with novelties, when I featured Gentiana kurroo in the last offering, I briefly referred to G. cashmeriana but completely forgot that I had raised a few seedlings last year which had purported to be this species. No sooner had the contribution been published, than two of the seedlings came into flower, in an earthy scree in full sun. They are small, slightly sprawling plants, the chief attraction being the solitary gentian flowers at the prostrate stem ends. Going by pictures on the web, they do indeed seem to be G. cashmeriana, rather like a very small and frail G. septemfida, but if not as spectacular, a good deal more classy. As I write, the third seedling is now coming into flower, several weeks after the others. If they perennate and establish, they promise to be a good addition to the garden. 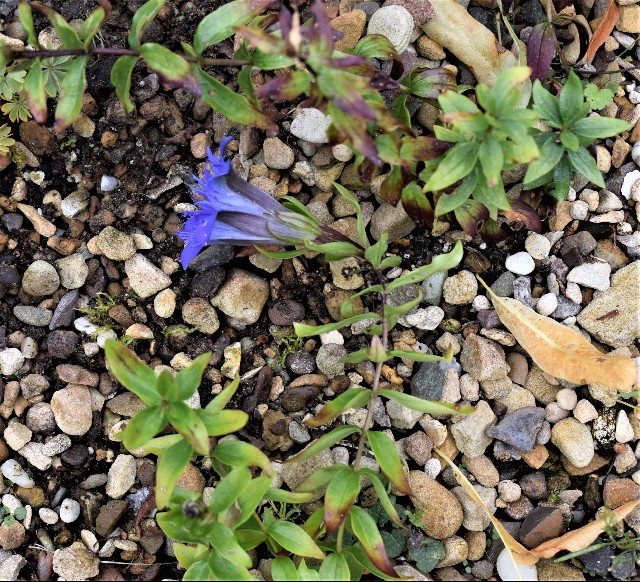 Another first to flower (and in this case to berry) is little Sorbus khumbuensis. This hails from the Everest region at altitude and is said by McAllister to be an apomictic tetraploid in the S. microphylla complex. Doubtless he is right, but it is much dwarfer here than the two S. microphylla (also from Everest) that I grow, and has pinky-white flowers while my microphyllas have red-purple flowers. Also, it colours much better. It has started to flower while less than a metre in height, and so promises to be the third dwarfest sorbus after S. reducta and S. poteriifolia. I have Barry Parkin of Penrith to thank for the seed and my memory is that it is not that much taller in his garden. 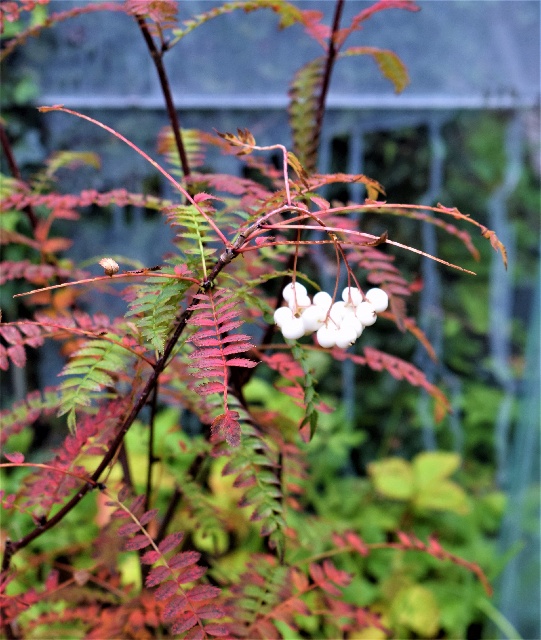 Something of a mystery here for my final novelty. I think I have acquired plants under the name Gentiana ‘Braemar’ twice. Certainly, looking at old pictures, I am not convinced they are the same, and I seem to have lost the first accession. The new plant (bought last year) has already been in full flower for two weeks, something of a tragedy as it is very nice and I had been hoping to exhibit it (still three weeks to the Loughborough Show!). Anyway, two lessons here: 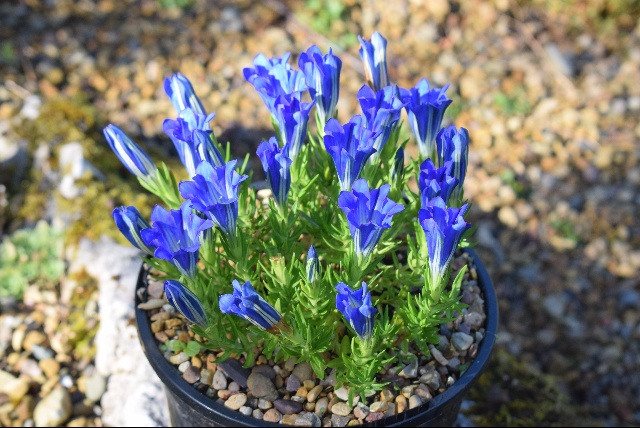 Arum pictum is also flowering much too early for the shows. We saw a lot of it in Mallorca last autumn (and pictured in the diary entry), seven full weeks later than this (although it was nearly over). So, Mallorca is warmer, so it is flowering earlier when cool here in Northumberland? Or is my alpine house really cooler than a Mallorcan wood? Certainly, I struggle to get most of my autumn bulbs to flower in time for the shows, even when I put them in a cool place.

Incidentally, this is one of the plants received from the garden of the late Ray Johnstone, and I have already been able to propagate it for distribution. 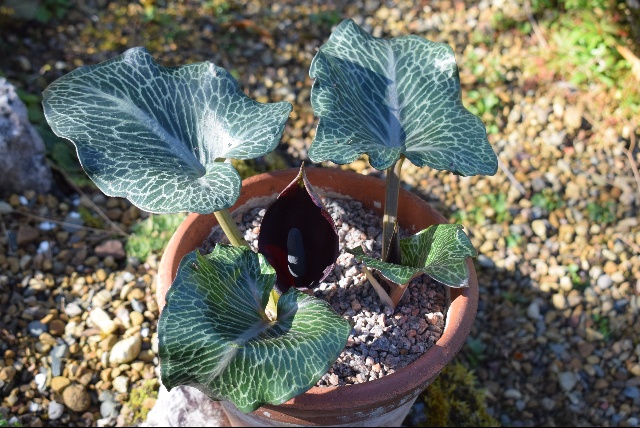 A few practical notes. About two weeks ago, we mowed our little meadow (… and a sausage roll…). We do this with our very flimsy electric battery rotary mower, very slowly, repeating a lot, without the box on, and stopping frequently as it becones jammed up. After the first mow, we rake the mown hay (mixed into the compost heap), wait a couple of days for the area to dry and then do it again, both times on the highest setting. After another week or so, with the hay removed again, we repeat on a lower setting. Just as well its a small area! The yellow rattle, orchids etc. were all well in seed and the seed can now reach the bare earth in places. We can now plant bulbs (some Camassia bulbs have been bought) and I intend to introduce a lot of oxlip seedlings. Cowslips have failed here: could the soil be too heavy?

Here is the mown area… 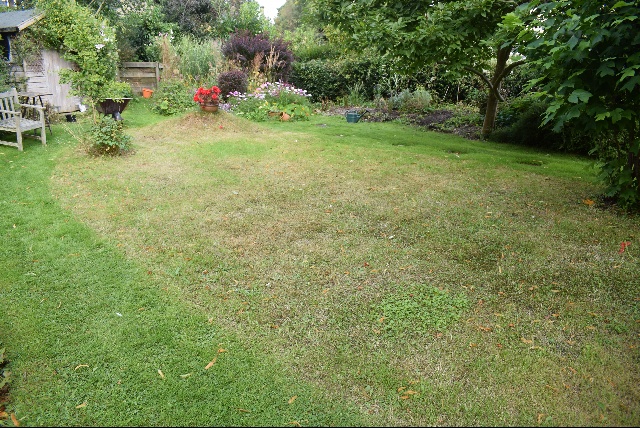 This is the time of year when saxifrage cushions are sometimes found to have been burnt during the summer, usually leaving dead brown areas on the south side. The remedial treatment is as follows:

You should find that the cushion will fill in over the filled hole during the winter. In the following picture, the plant is Saxifraga pedemontana (Turkish variety) (and a S. sancta to the right) and it has been ‘happed’ and filled with some granite rubble that I had no better use for. Not ideal but it will do. 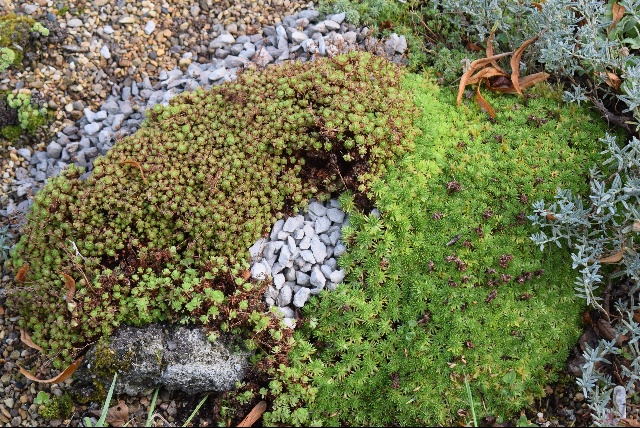 While talking on practical issues, I thought some might be interested to see how the new scree bed has developed. Regular readers will remember that a year ago a large Korean fir was felled by my two grandsons, thus freeing up quite a lot (9 x 3m) of raised scree. This was dug through and several barrow-loads of sieved compost dug into what was effectively pure sand and grit. It was then levelled, planted and top-dressed with a scree mix (much of which has vanished into the mix). Later, many bulbs were added.

A year after planting, there are two main conclusions. First, many (perhaps most) subjects have grown well and most look fit and healthy. Second, compost from the heap is never free of weeds, at least in this garden where the heap never gets hot enough to kill weed seeds. I have been picking out annual weeds from here over much of the summer but the worst seems to be over and the bed is looking quite attractive. The bulk of plants are saxifrages, mossies, porophyllum and silvers, mostly propagated from cushions elsewhere in the garden, and these make an effective framework. Several daphnes have done well and many other rosettes and cushions. Now I can look forward to the early bulbs again. 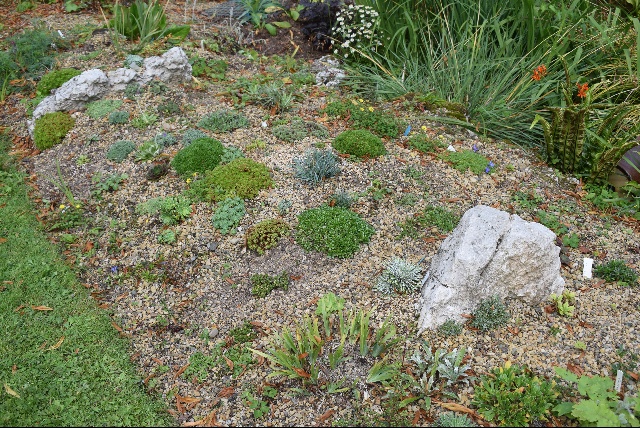 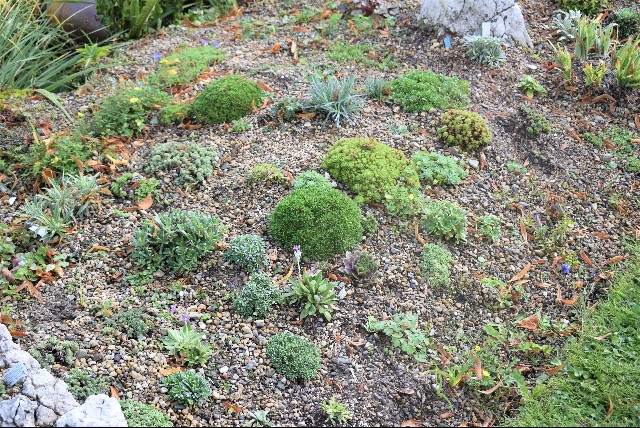 Three marvellous autumn subjects to finish with. Firstly, the superb Roscoea purpurea ‘Royal Purple’ which dominates the garden at this times of year, followed by two good, tried and trusted autumn anemones, A. ‘Honorine Joubert’, and A. ‘Pink Kiss’. Japanese (so-called) anemones struggle here, preferring a more continental climate with drier air. However, these two, together with ‘Wild Swan’, do seem to have settled down. 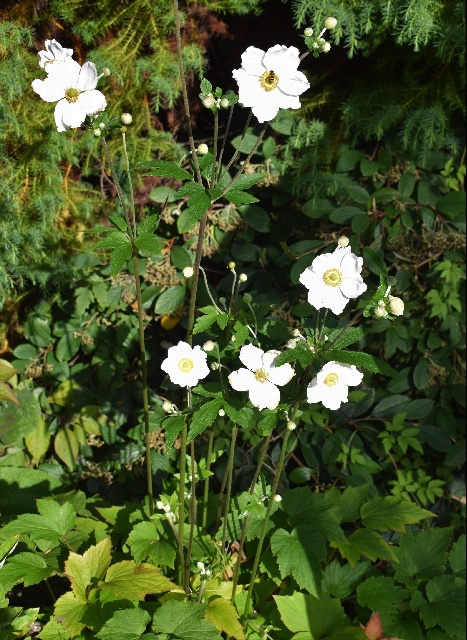 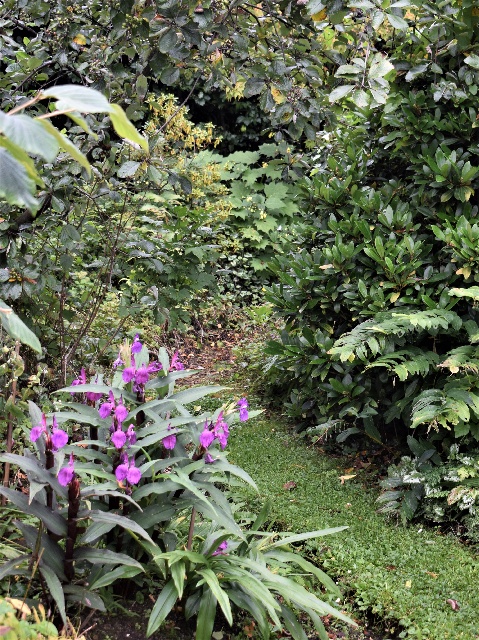 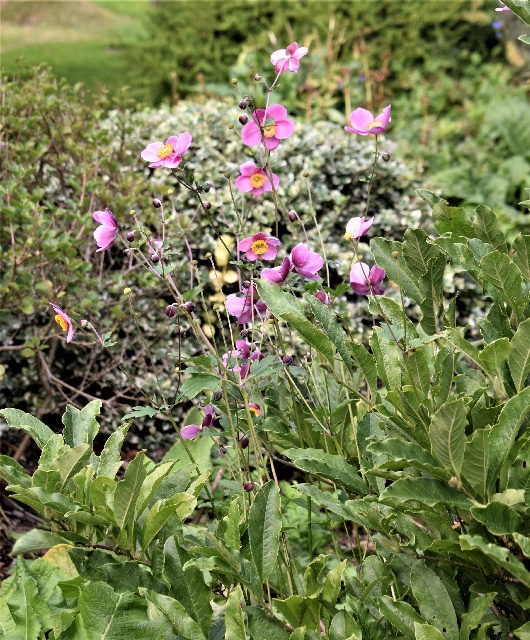 And for autumn colour, you can’t beat Shortia uniflora, if you can grow it! 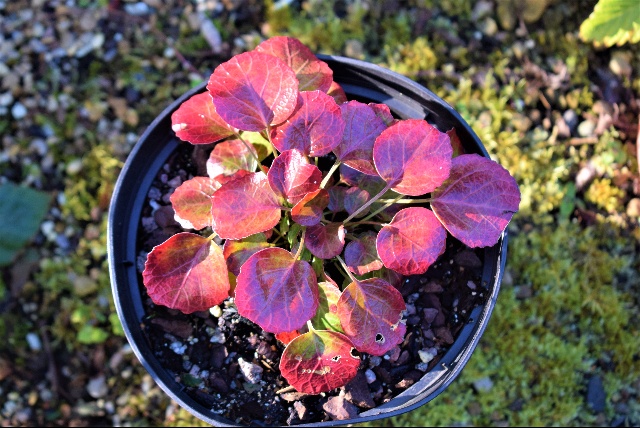 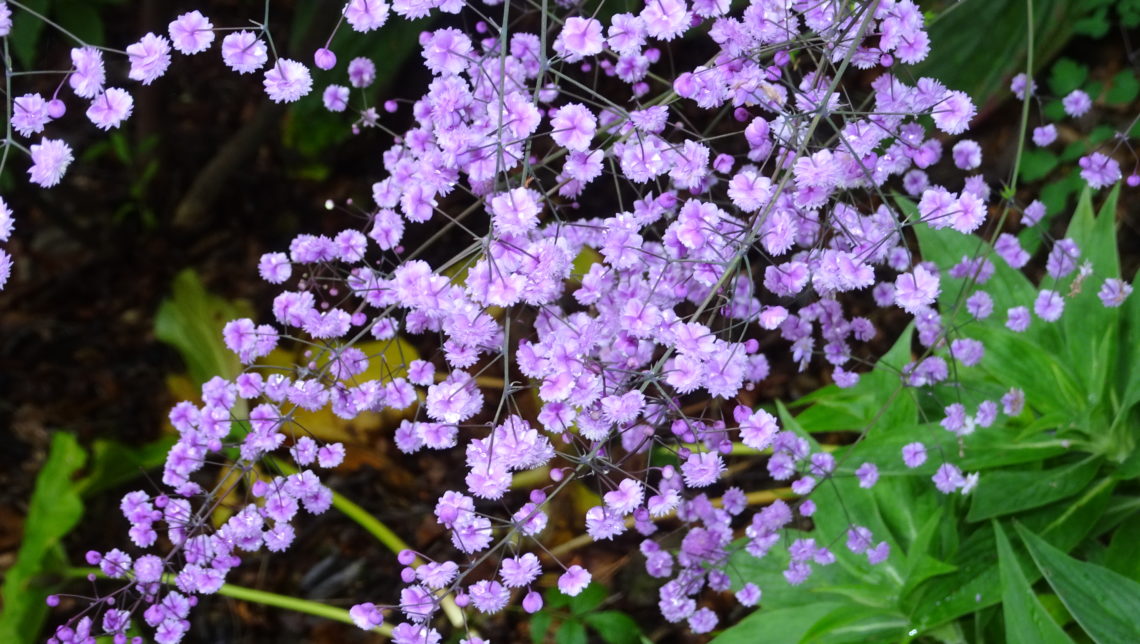 North Wales Diary
The first inklings of autumn
The first signs of autumn are appearing for our North Wales diarist, including Cyclamen africanum and Acis autumnalis. ...
29 August 2019 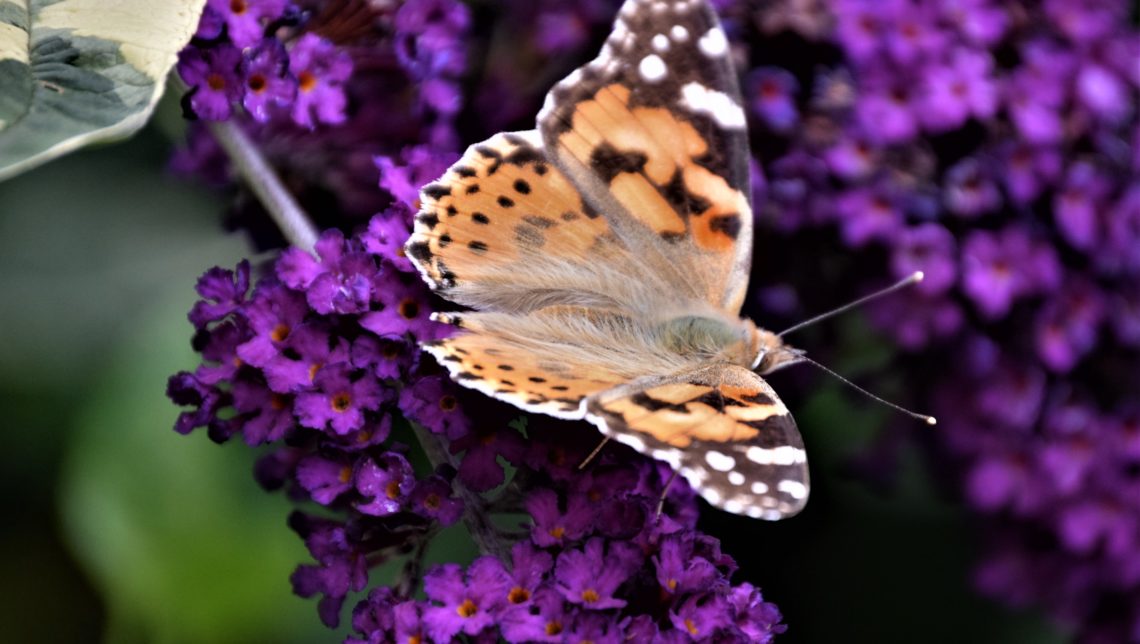