The first inklings of autumn

Another very variable month with lots of cool, rainy and often windy days interspersed with periods of warm, even hot, sunshine. The first leaves are starting to fall from the many trees in the garden and a light jacket is advisable for a late stroll as the days begin very noticeably to shorten, while the grass remains bright green and still requires a weekly cut.

As usual, the main contributors to late season colour in a garden where there are no dahlias or Michaelmas daisies and few perennials other than those of a shade-loving kind, are the Japanese anemones of which I have large, ever-increasing clumps around the garden. To my mind, the ordinary single pink unnamed Anemone x japonica is as good as any, except perhaps the virginal white ‘Honorine Jobert’, which is just as vigorous. ‘Hadspen Abundance’ also spreads far and wide and has to be removed at frequent intervals if it is not to overtake everything else in its neck of the woods. 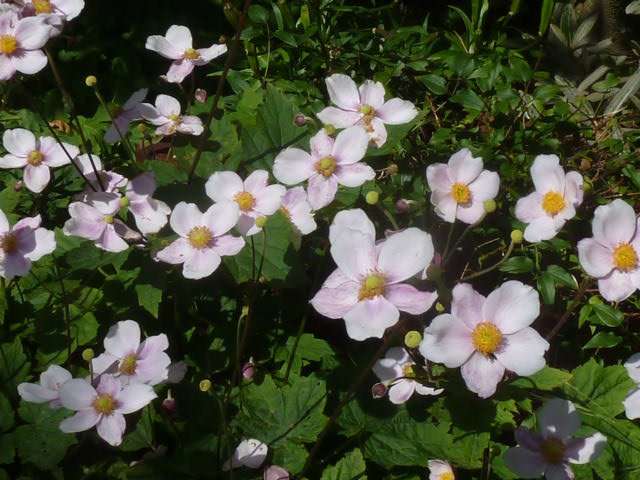 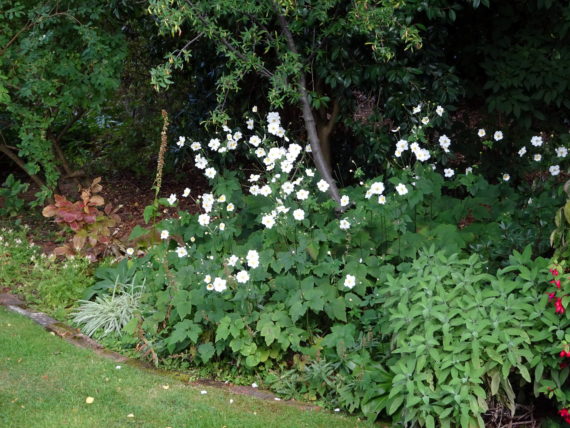 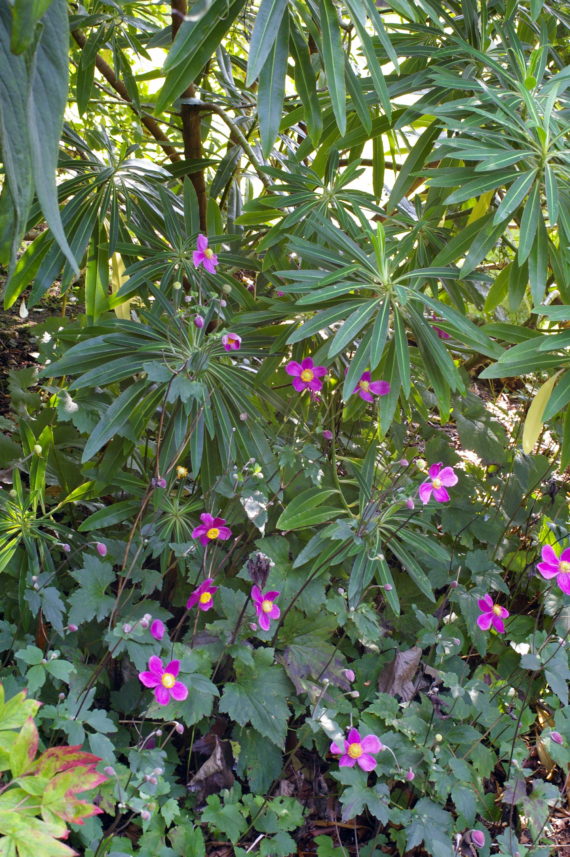 I love all thalictrums for their airy grace and have quite a few of the spring flowering species, as well as a number of forms of the late summer flowering Thalictrum delavayii, featured here. I like this chance arrangement of T. delavayii ‘Hewitt’s Double’ growing amongst self-seeded Echium pininana and planted Echium candicans (foreground). The thalictrum grows to about 1.2 m and requires light staking in this windy garden. I have not propagated it yet as, being fully double, it does not set seed like the single forms. It is now hopefully becoming big enough for a few small pieces to be taken off next spring. 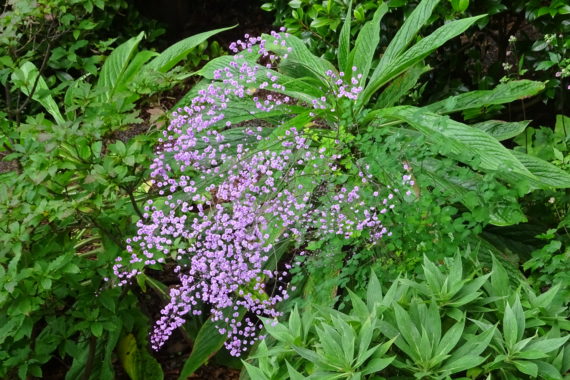 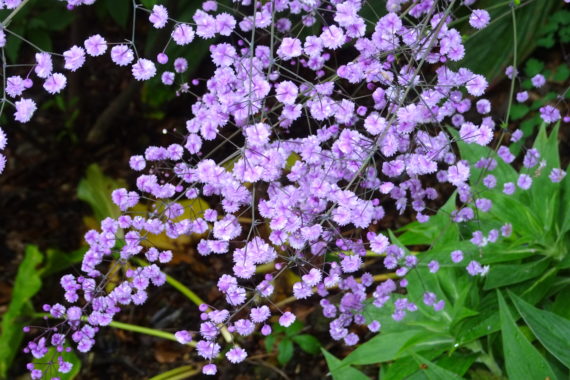 I have always loved these (chiefly Japanese) woodlanders but have not generally been very good at getting them established. I suspect this is mainly because the soil in most of my shady sites dries out too readily. However, while I have them here are T. formosana ‘Empress’ and T. macrantha subsp. macranthopsis. The former is showing off its curious upward facing flowers very well while the latter is more demure, requiring that its tubular blooms be tipped up to admire the vivid spotting within (an alternative is to plant it on top of a shady wall bed where it can be admired from below). 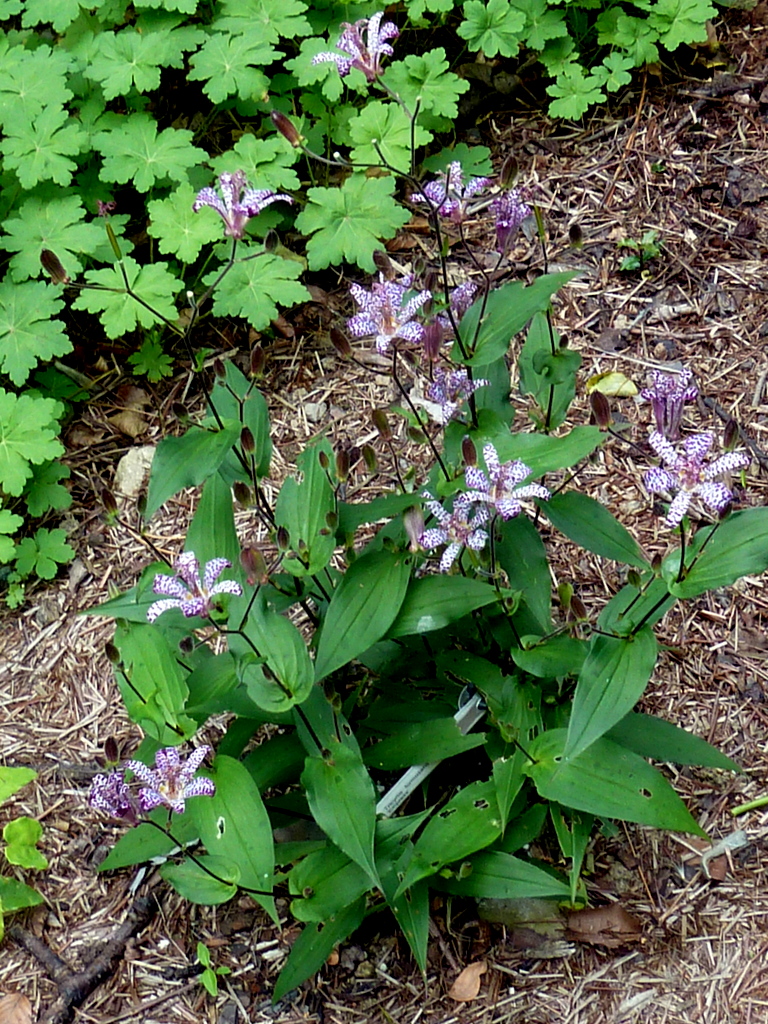 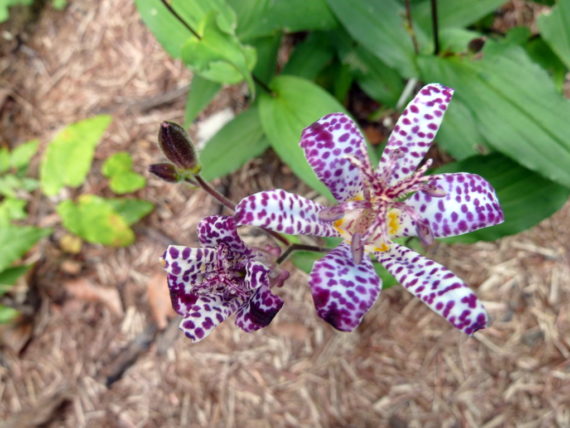 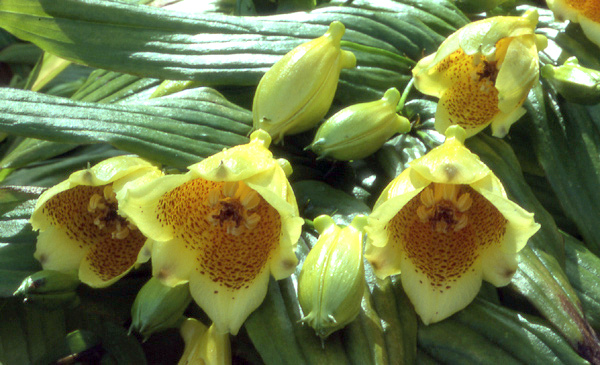 I have never grown many autumn flowering bulbs apart from Cyclamen and a few Crocus and, as the years have passed, they have tended to dwindle, whether in pots or the open ground. Cyclamen hederifolium of course does well without any attention and the very similar C. africanum is equally long lasting and trouble free. The plant shown of the latter is a single tuber more than 20 years old and 25cm across. It lies on and in the surface of the soil in a very dry, partly shaded spot beneath a large old apple tree. Occasionally, I give it a top dressing but only when I remember!

The diminutive Acis autumnalis is equally easy and long lived and I must say it is one of my favourite autumn alpines. I grew Colchicum varians from seed sown 12 years ago and it has only flowered on three occasions, as this is one of them I thought I would show it to you. It comes from western Iran where, as far as I can tell, it is a local species. It seems to be quite rare in cultivation and I have been unable to find much about itse ecology or cultivation. 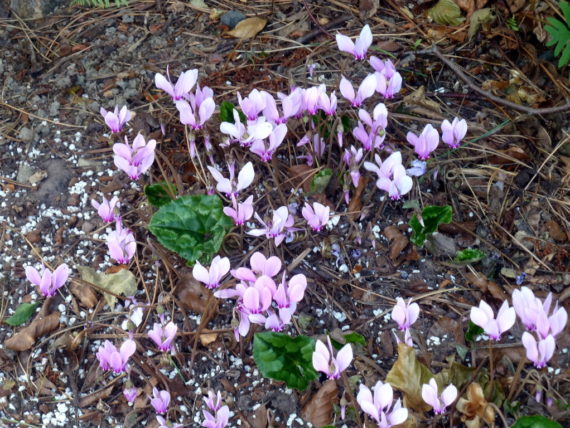 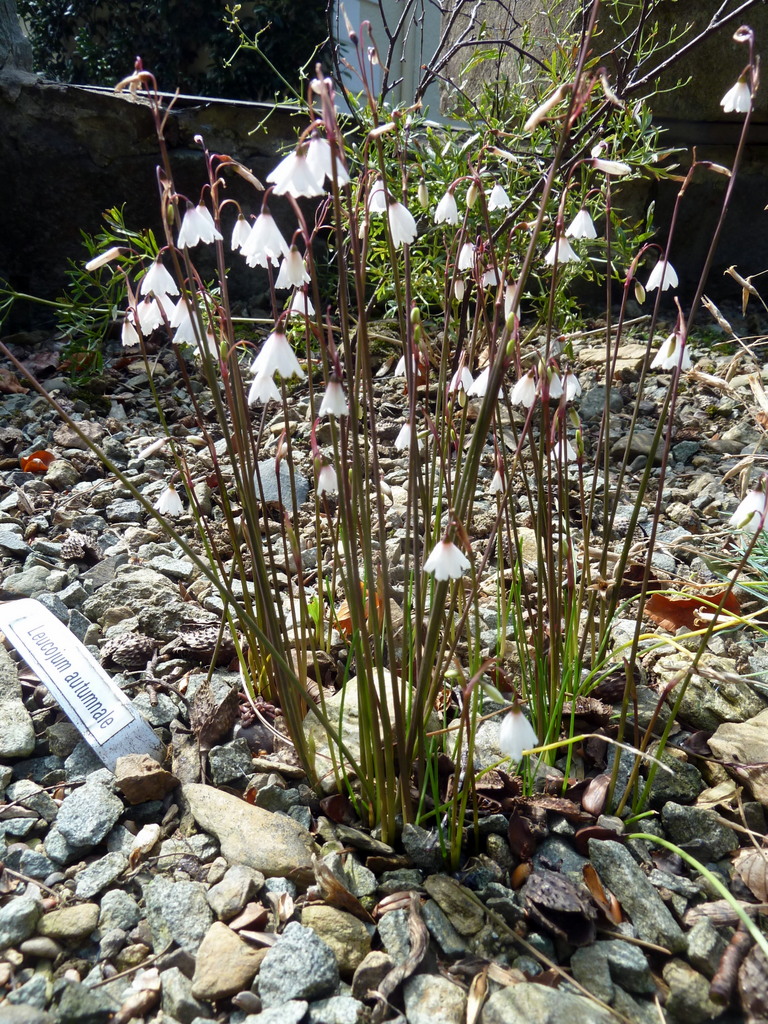 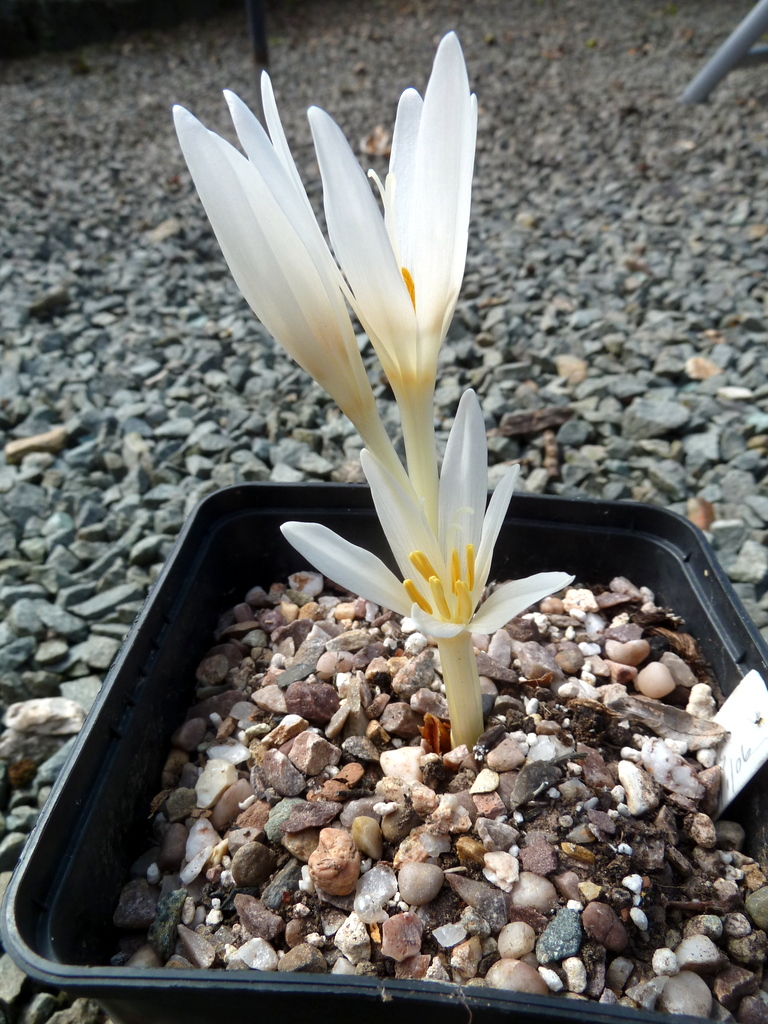 I have written about this unusual little shrublet before but thought I would give it an ‘airing’ again here as it was given to me by Ron and Joan Beeston a few years ago and it is nice to remember their kindness in the year when Ron sadly passed away to join Joan who died a year or two since. What a nursery they had outside Worcester in the ’70s and ’80s, and how wonderful was their garden, packed with treasures, and what hospitality. 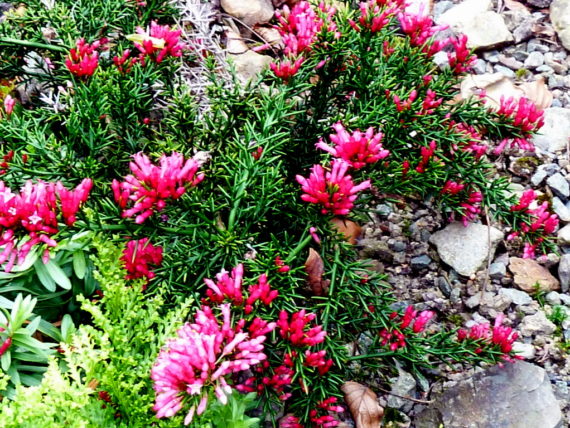 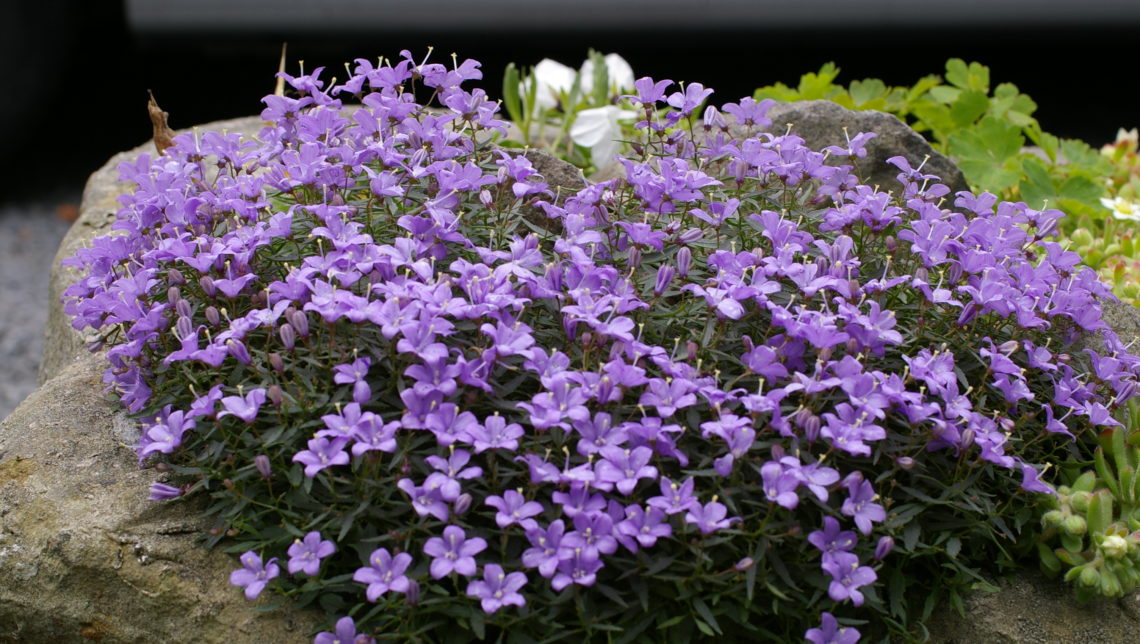 North Wales Diary
A (mostly) unremarkable British summer, so far…
See what's in flower in our diarist's garden this summer, including Campanula and Codonopsis....
29 July 2019 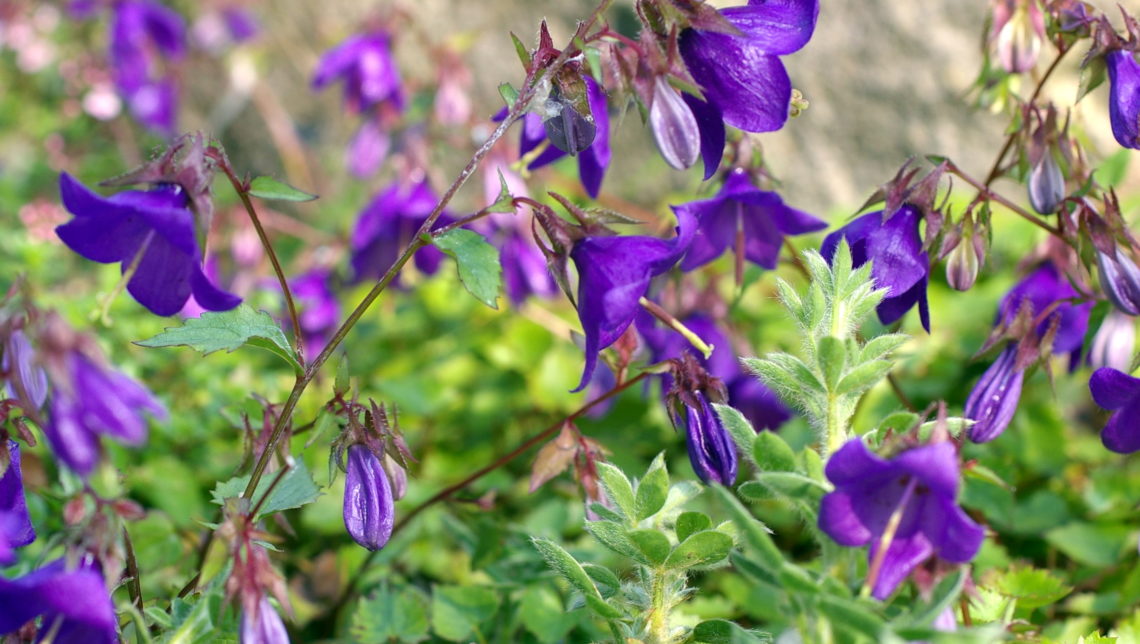 North Wales Diary
Flaming June… I think not!
From Campanula to Corydalis, see what's in flower in our diarist's North Wales garden....
2 July 2019 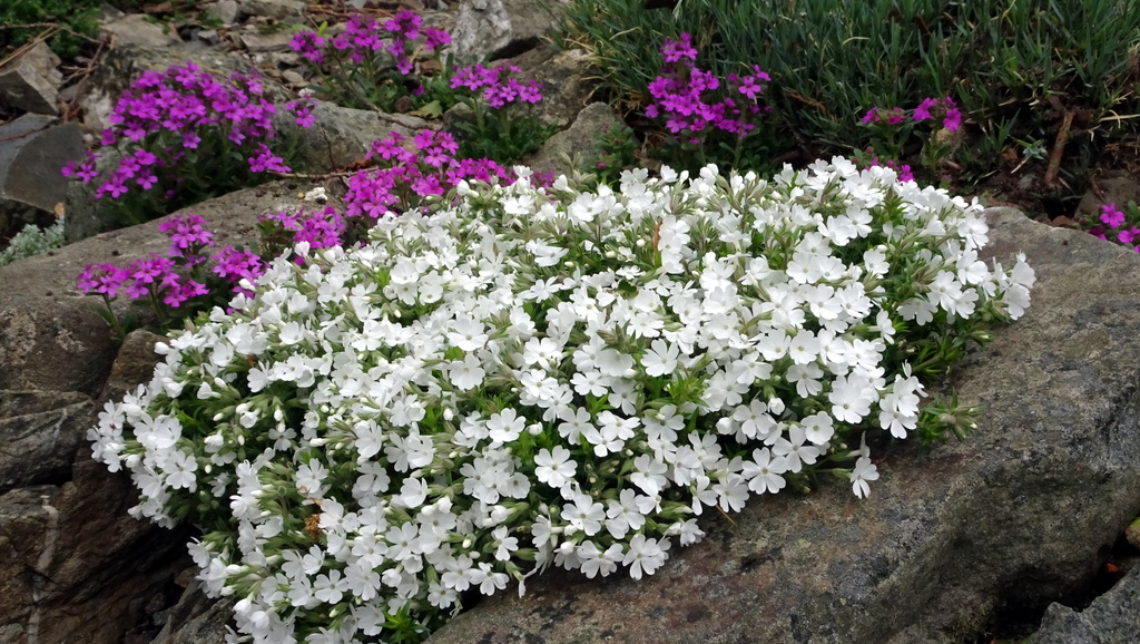 North Wales Diary
May 2019
See what's flowering in our diarist's garden this month, from Phlox to rhododendrons....
28 May 2019