Anyway, it has been a rather strange month, mostly quite chilly but dry with very few of those idyllic ‘shirt-sleeved’ May mornings we yearn for in the midst of winter blues. Most plants seem to have been happy though, often lasting longer in good condition than in a more typical May. The problem as always in this month is to decide what to show you as so many plants are at their best and the camera shutter is rarely silent for long.

So many of the best plants that I grow have white flowers or silvery foliage. Among my favourites this month have been two cushion plants with the snowiest of snow white flowers, the first aptly named Phlox nivalis subsp. niveus, the second Silene glaucophyllum ‘Album’. Both have flowered for much of the second half of April and most of May, sparkling among the dark greyish-brown shale that I use as a top dressing for my raised beds.

Just by chance, the self seeded ‘Fairy foxgloves’ (Erinus alpinus) enhance the contrast in the photograph of the Phlox, as they often do if allowed to remain where they place themselves. The Silene is one of several good plants in a refurbished section of our long raised bed, others being the Lewisia rediviva ‘Rosea’ illustrated last month and the very long flowering Kevock Nursery-collected Primula bullata subsp. delavayii. I am really impressed by the latter which is robust as well as free flowering and I hope to get a good set of seed, which will be worth contributing to the exchanges and back to Kevock as I do not have any other forms of P. bullata so there should be no contamination. If this can get around more widely I have no doubt that it will be a very popular Primula suitable for all gardens. 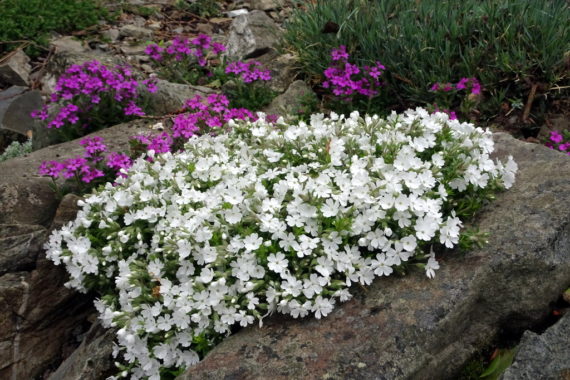 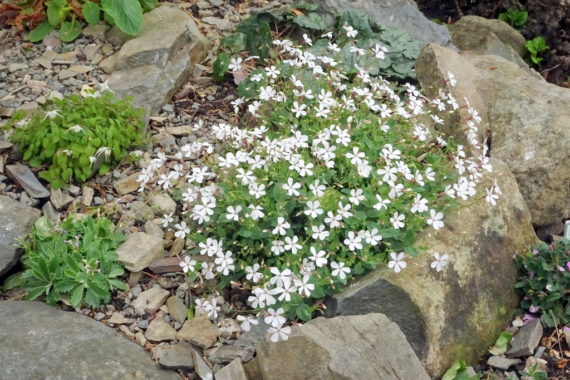 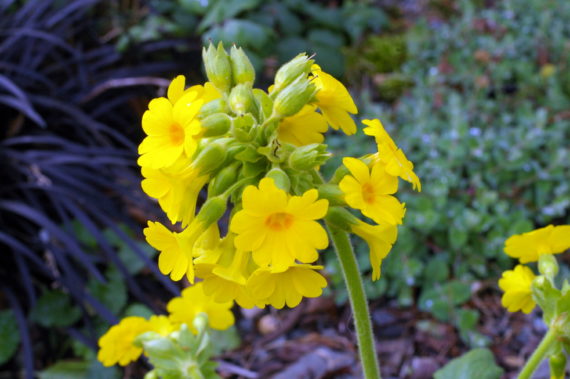 Rhodohypoxis have always done very well here and continue to increase steadily year on year. One of the best is R. baurii ‘Alba’, which is not affected by damp, cold winter conditions providing the soil is really well drained. I have never know any of my Rhodohypoxis to set seed – have I looked hard enough? 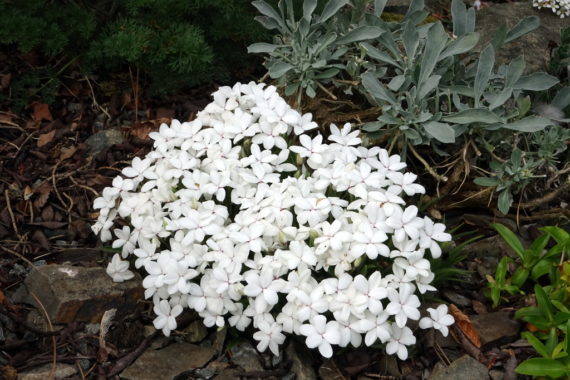 So many of the best shrubs, including many of our rhododendrons, have predominantly white flowers, although some are delightfully stained or infused with other colours. Among the smaller ones R. ‘Egret’ from the Glendoick stable bedecked with its tiny ivory thimbles is one of the best. A little larger is the pink-infused  R. yakushimanum hybrid ‘Dusty Miller’. Larger again is a plant in the Fortunea section I got from Dawyck Castle more than forty years ago. It is a bit like a stag-headed oak – going backwards with age – but the flowers are lovely and I indulge it for that reason. Best of all my whites, although it can only thrive here on a shady wall, is the magnificent, highly and very sumptuously scented R. ‘Princess Alice’, one of the once many now few scented conservatory rhododendrons of Victorian and Edwardian days. 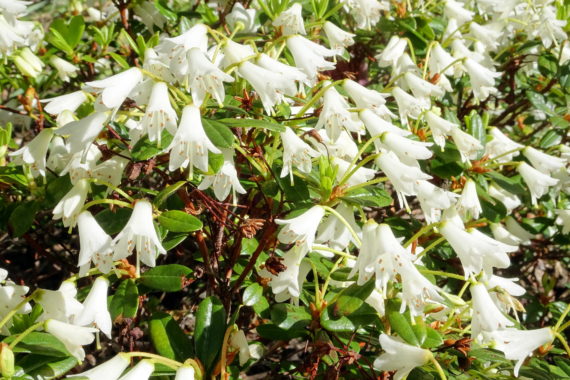 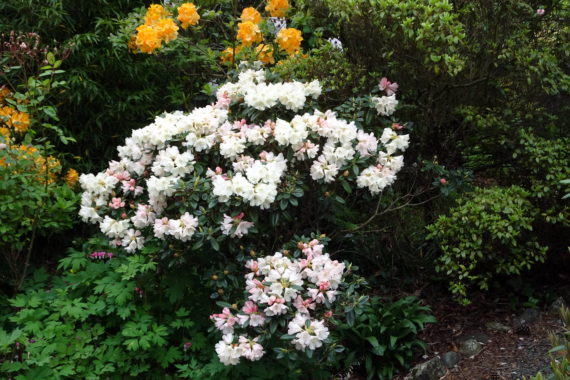 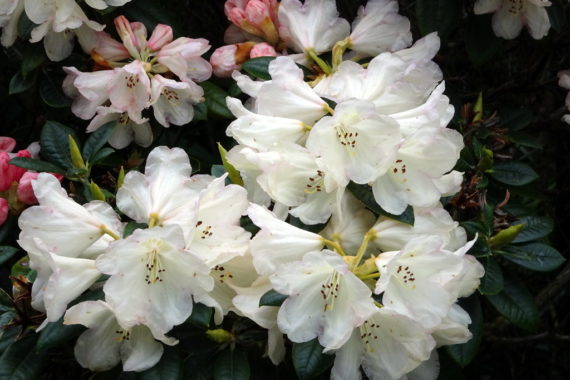 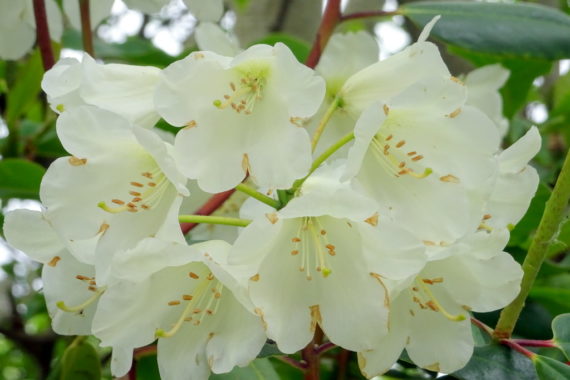 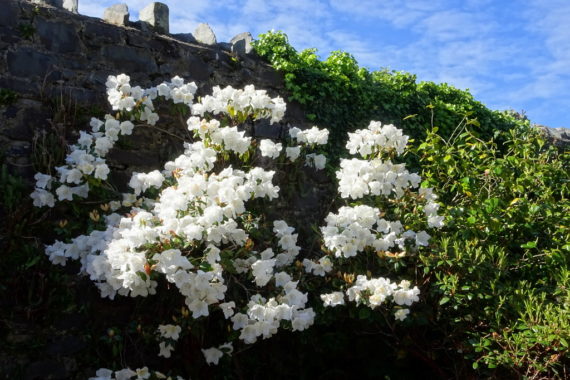 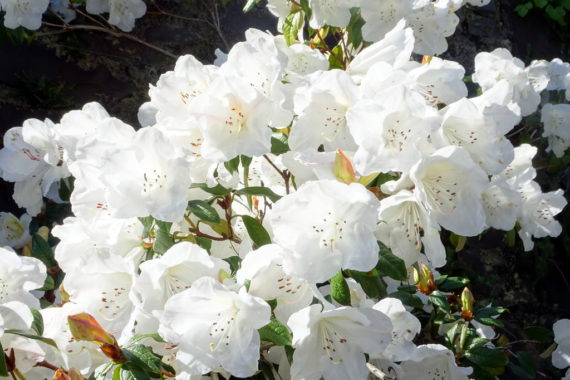 Deutzias are beautiful, common and easy shrubs for every garden and therefore, like many good things,  are often underrated. Of those I have grown – quite a few over the years in six different gardens – D. gracilis is my favourite. The type plant, which occurs wild in low mountains in Japan with cool to warm temperate climates, is a graceful upright bush reaching 2m high and wide after five years. Pruning consists of taking out old wood soon after flowering and that is all the attention it needs. The dwarf form ‘Nikko’ shown here is only 50cm high x 75cm wide after five years and is a very pretty little shrub. Because it is so compact and congested it is rather difficult to prune and you will notice that my plant has been rather left to its own devices. It has been flowering for six weeks and is still quite good. 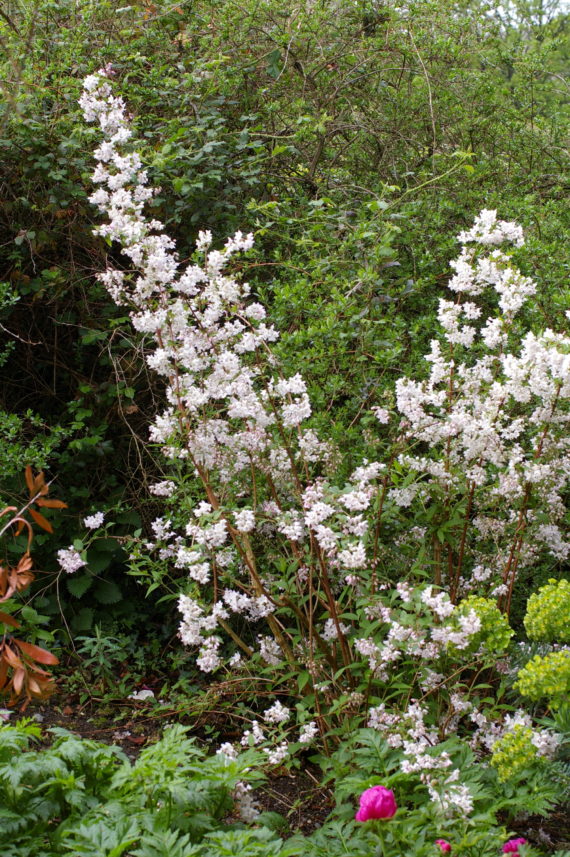 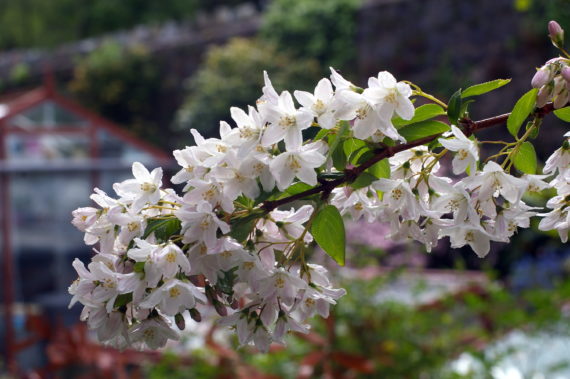 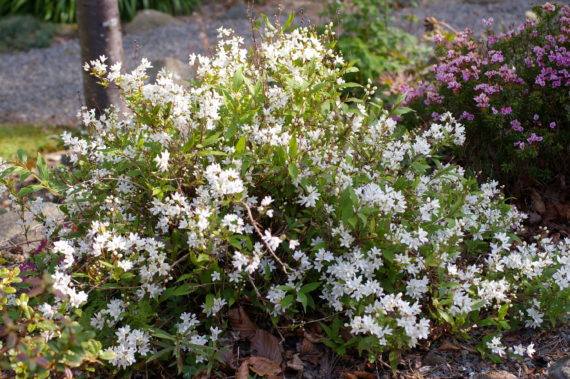 This evergreen member of the citrus family from Western Tasmania, where it grows as an understory shrub to 3m in the temperate rainforest, is, I believe, uncommon in cultivation in the UK. I got my plant 25 years ago from Bodnant Nursery and while not spectacular it is worth having, especially when bearing its abundant clusters of  white hawthorn-like blooms. It has had no special care, just looking after itself, and it has never been pruned! 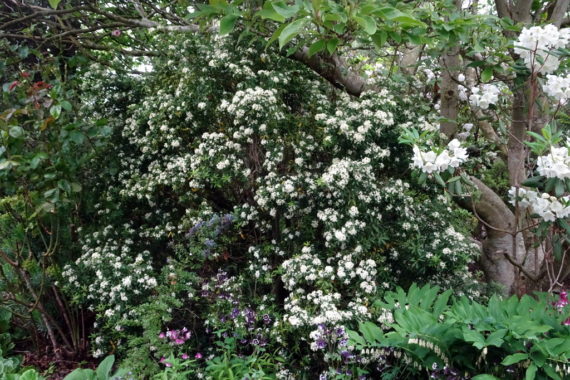 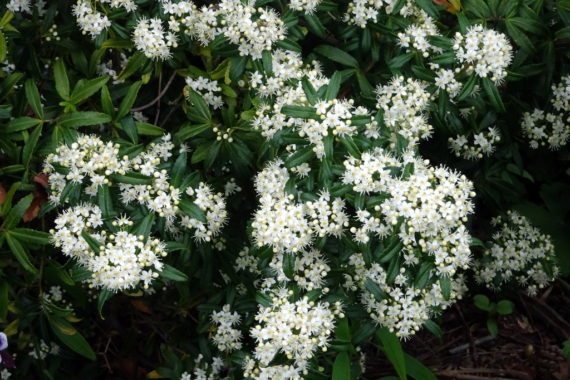 We have quite a few roses, mostly either species or old roses, so to add a bit of colour to this posting I include two that are in full flower here in mid-late May, R. moyesii ‘Geranium’ and the intriguingly named R. ‘Golden Chersonese’.

R. moyesii grows wild in Western China where it can form impenetrable thickets on hilly slopes, ‘Geranium’ is a selected from with darker flowers than most. Be warned, it is a very vigorous, thorny plant with ambitions to take over the world, suckering freely and growing strongly up to 4-5m, so it must be treated harshly if you are to remain the boss. But when in full flower it is a glorious site, while the orange, flask-shaped hips are pretty good too.

R. ‘Golden Chersonese’ is a hybrid of  R. ecae x R. ‘Canary Bird’ raised by E.F. Allen in 1967 and is much better behaved! It grows up to 3-4m with dark brown thorny stems bearing plentiful almost fern-like foliage. The flowers, as the illustration of a young (three-year-old) plant shows, are a wonderful strong, clear yellow. But what of the name? Starting with one of its parents, R. ecae was introduced from Afghanistan to the UK in 1880 by Dr J.E.T. Aitchison who served as an army surgeon in the Afghan war of that time. He named it after his wife’s initials (!) E.C.A. As for ‘Golden Chersonese’, well, the name means Golden Penisinsula and was was given by ancient Greek geographers to the Malay Peninsula, believed to be a paradise of beauty and gold! It is mentioned thus by Milton in Paradise Lost, Book X1, Line 394, “Down to the Golden Chersonese”. 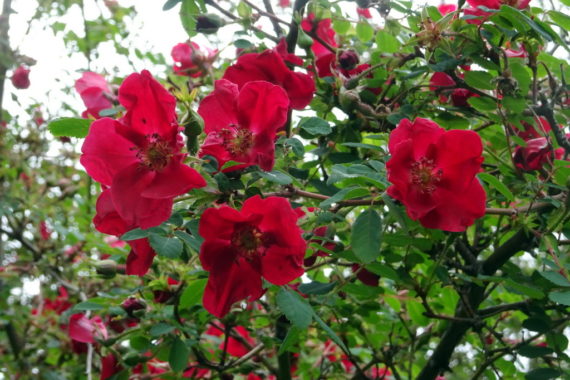 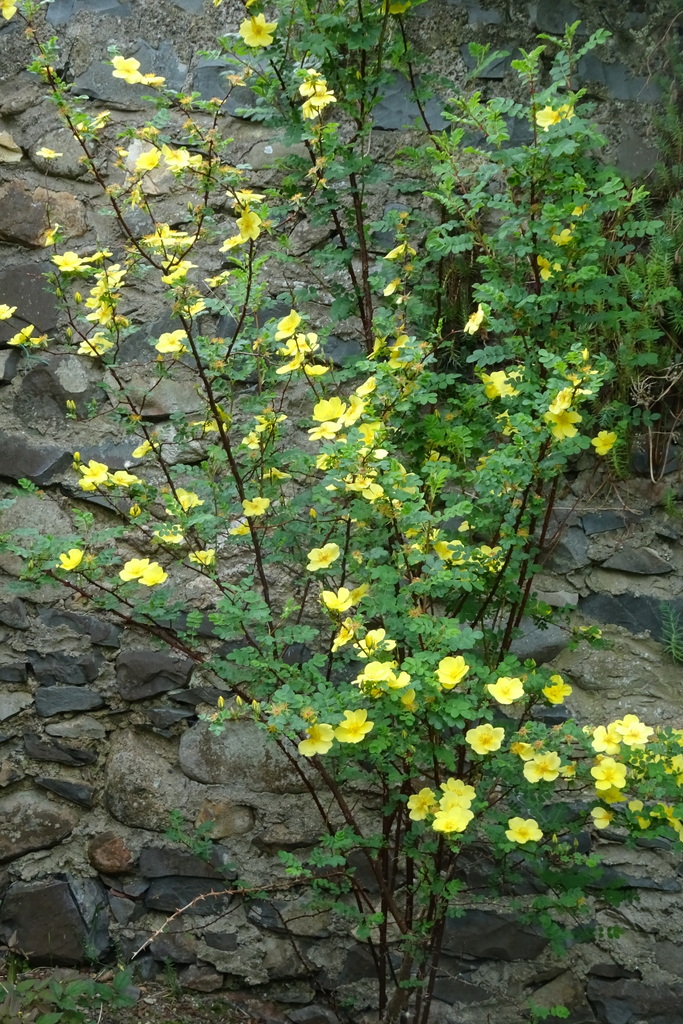 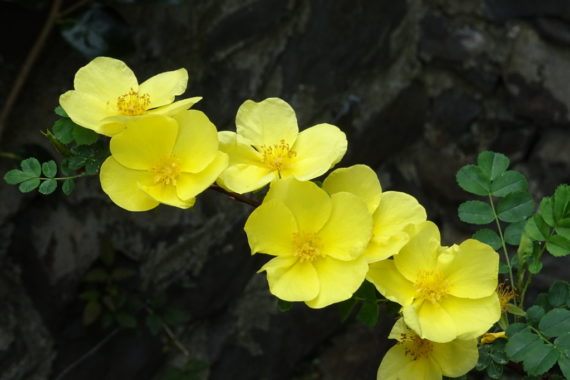 An alpine miscellany to end with

So many to choose from but here goes. Globularias are much of a muchness and instantly recognisable whether in the field, where they are always associated with rock, and in the garden, where they are easy, slow-growing cushions or carpeters. They flower for a long time, especially if you deadhead every now and then. The one illustrated is G. meridionalis ‘Blue Bonnets’, the type species being widespread in the S.E. Alps and the Balkan peninsula.

Most visitors are surprised to learn that the plant of Aster alpinus shown here is about 15 years old and still going strong. Top dressing with a gritty but nutritious feed seems to increase the longevity of this as with so many other alpines but overdo the kindness and the result will be lots of leafy growth and fewer flowers.

Ptilotrichum spinosum ‘Roseum’, draping itself over the corner of a high raised bed is even older and loved last year’s long hot summer, mimicking that in its homeland in the Moroccan Atlas where I saw it many moons ago covering shaly ridge tops along with the so-called ‘Blue broom’ (Erinacea anthyllis).

Finally, two ramondas, both of which thrive in a damp, half-shaded crevice bed, the Pyrenean R. myconi, which I also have in pink and white, but are poor to my eyes compared to the lovely dark violet type, and R. serbica, which as far as I am aware is only available in pure clear violet. 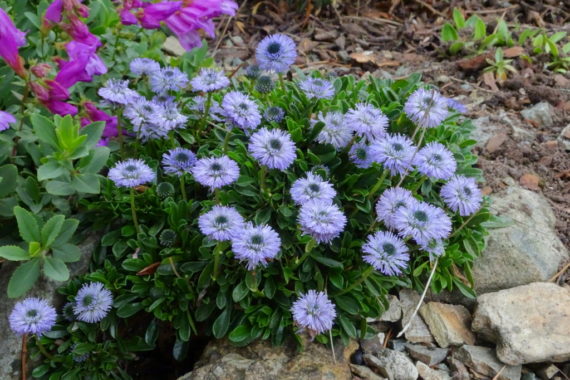 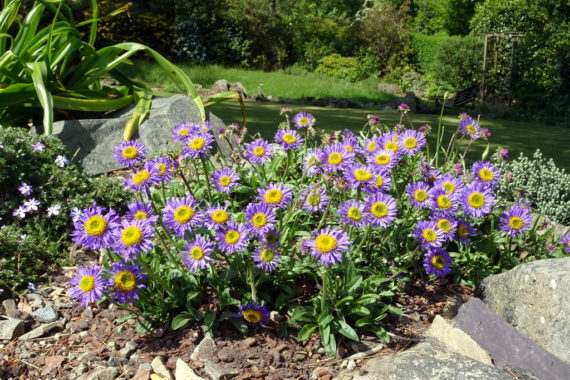 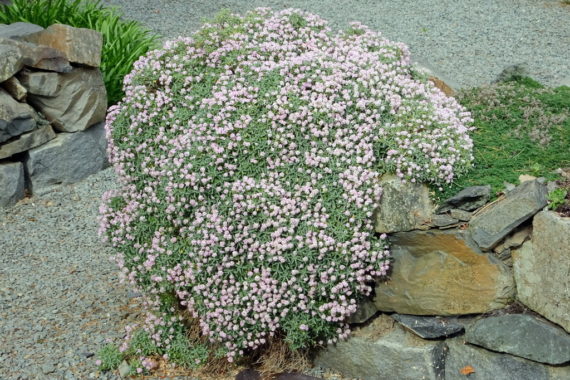 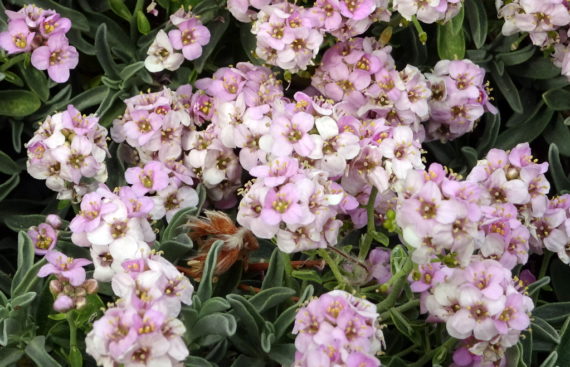 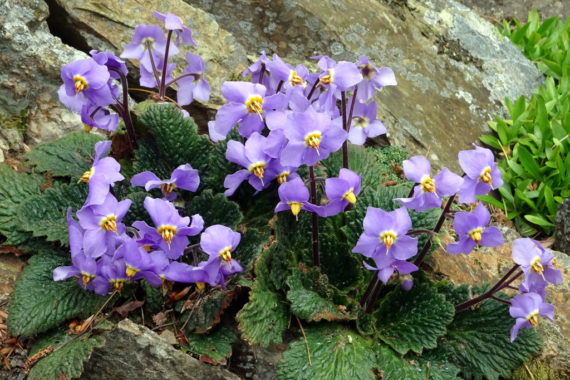 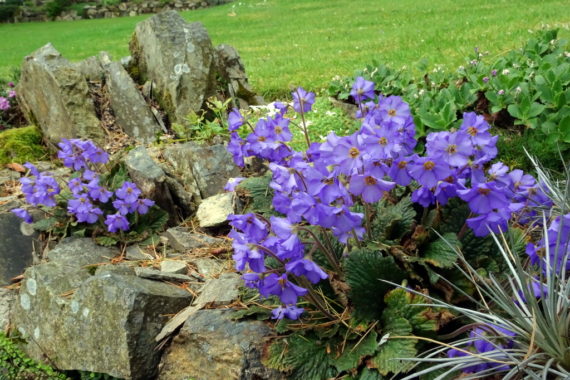 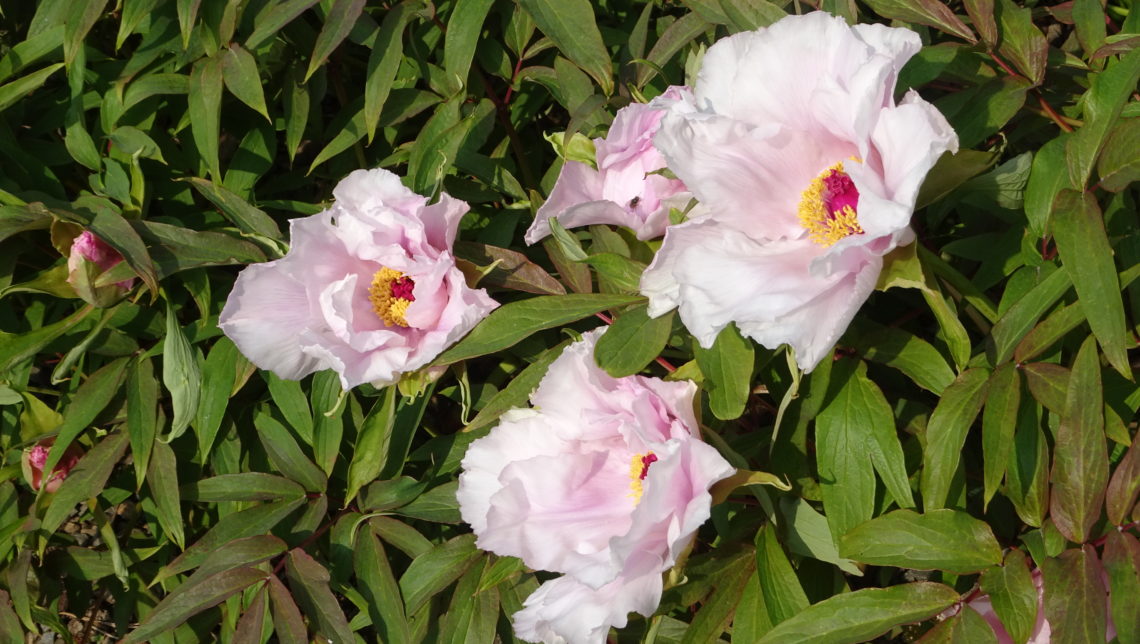 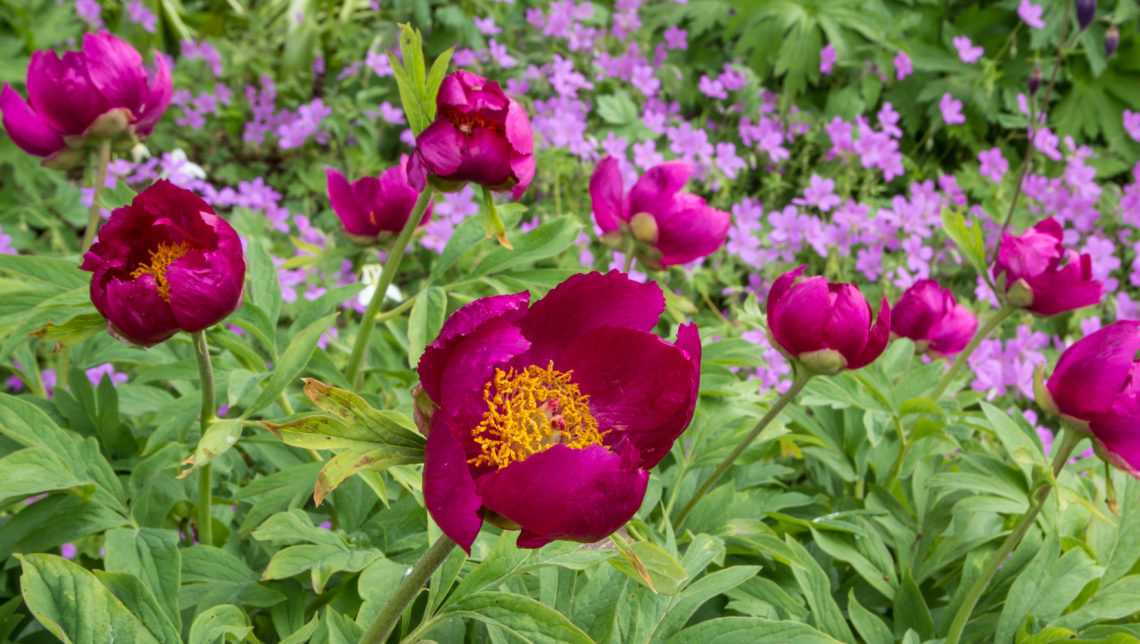