So far this winter seems to have flown by! Good news if one dislikes winter, but any passing month is bad news at my age (!). Plantwise, many have decided that winter is past. So, we find ourselves just over a week into February embarking on a very early spring. In fact, I’m concerned that some plants I’d earmarked for the AGS show at Theydon Bois on 29th February 2020 might have shot their bolts by then! In this diary entry, I look at early flowering plants in my garden in Northumberland.

The year’s early cheer is most advanced in Rhododendron barbatum. It’s a stalwart standby here, but is usually characteristic of mid-March or early April. A gorgeous native of the eastern Himalaya, this rhodo has a happy knack of flowering during a frost-free period. Since we’ve had no major frosts for the last ten days, it’s now bursting into bloom with a third of the trusses having opened so far.

This rhodo has even beaten many of the snowdrops into flower! This includes the bulk of my display here – Galanthus woronowii, G. nivalis and G. nivalis ‘Flore Pleno’. It has also flowered earlier than its usual forerunner – the inaccurately named ‘Christmas Cheer’ – which usually flowers in mid-February. Right now, ‘Christmas Cheer’ is only just starting to break bud. It’s noteable that some plants have the ability to run far ahead of themselves, while others keep steadfastly to their chosen date.

Daphnes off to an Early Start

This time last year I featured a small Daphne bholua in my garden diary. It was a kind gift, which flowered after its first year here. I planted it in a sheltered south-facing niche, protected from morning sun by the garage. This site gets little sun during winter, and, for a Himalayan subject, arguably too much at the height of summer. But the plant seems delightfully happy, nonetheless, because it is in full fragrant flower now. Also, checking last year’s photos, it has grown a huge amount in the last twelve months. It’s already 2.5 metres high! In my experience, Daphne bholua is much hardier than its smaller relative D. odora, which never thrived here.

Another really early Daphne here is the Balkan D. blagayana. It’s beaten the natives D. mezereum and D. laureola into flower, both of which are still in tight bud. I grow D. blagayana in the popular dwarf selection ‘Brenda Anderson’. The usual recipe for growing this is to ‘put it in the scree and throw a rock at it each time you pass’. Sounds easy, right? But this hasn’t really worked for me.

A plant in the scree did quite well for a bit, but then started to fail, possibly having run out of whatever meagre nutrients were available in the first place. Also, remarkably for a plant native to northern Greece, it seemed to dislike the summer heat. In fact, the best remaining bit now grows in very deep shade, having been overgrown by a large Parrotia during its long life. Of course, it’s less shady when the parrotias leaves are off in late winter, when it flowers.

Equally under the gloom of the parrotia, is Sarcococca confusa. This is an undemanding, but underwhelming, mostly evergreen shrub. It flowers and fruits at the same time, just after Christmas. It would probably do better and flower more heavily in less shade. Nonetheless, it is a tolerant, long-lived soul, whose main merit is the strong winter fragrance from modest flowers. 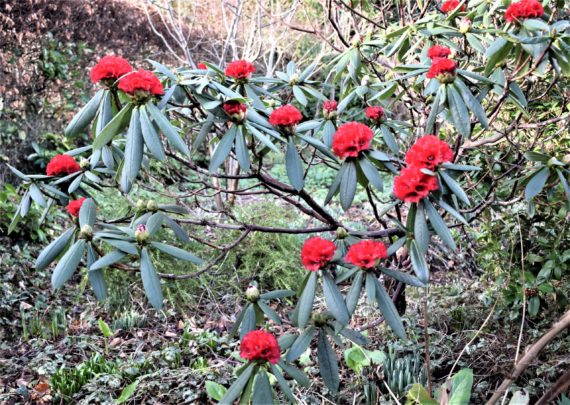 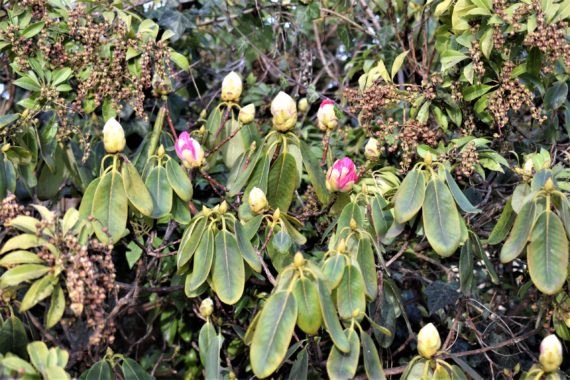 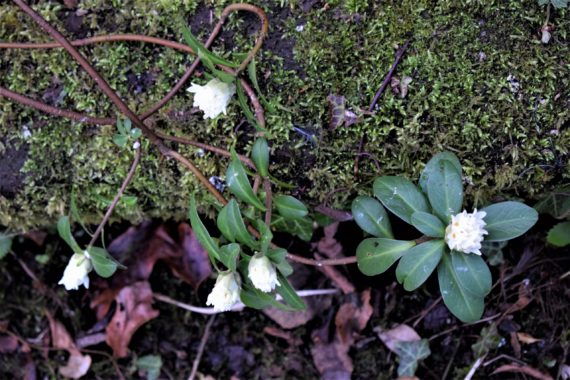 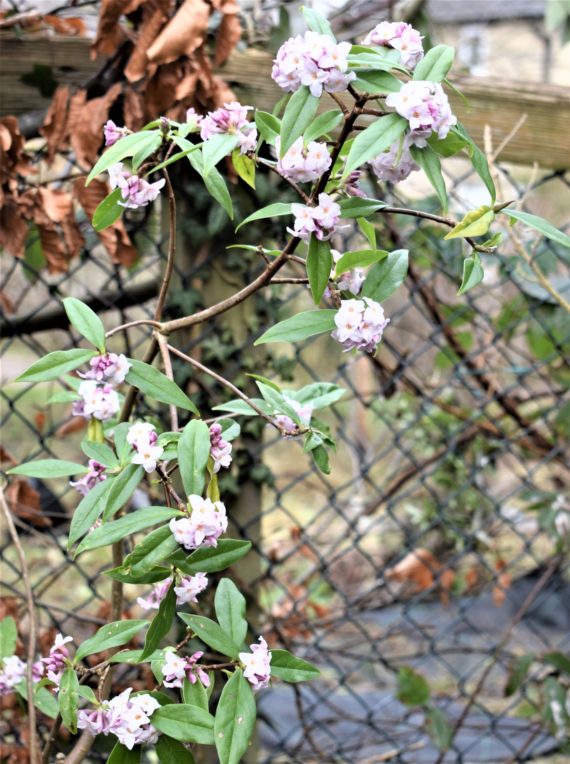 Bulbs – Watch out for Mice!

Parts of the garden are already colourful with crocuses. Several varieties of C. chrysanthus are displaying orange, yellow and white flowers and C. sieberi and the great masses of C. tommasinianus are approaching thier zenith. The earliest out were attacked by mice, I guess.

The same culprits have been nipping the reticulata irises just below the flower. I image they’re trying to get at the nectar. Once the bulbs are in full flower, the miscreants seem to be overwhelmed and the attacks seem to stop. Of course it could be sparrows, but we rarely see them in this garden. While snowdrops don’t seem to suffer much, Leucojum vernum certainly does. Indeed, I’ve been losing half the flowers of the spring snowflake this way.

Another bulb which gets attacked is Scilla mischtschenkoana. It is naturalising nicely down by the gate, growing here with a nivalis snowdrop collected by my wife’s aunt from Biddlestone Lee, which we have named for the locality. It is unremarkable apart from its strong and sweet scent – unusual in snowdrops.

Snowdrops of All Kinds

This brings me to snowdrops. I have relatively little to report, except that a number of less vigorous but treasued varieties have yet to appear this year, and I fear for their futures. Something over the last few months seems not to have suited them. Having said that, some of the earlier varieities, like ‘Straffan’, ‘S.Arnott ‘ and ‘Dionysus,’ have been superb and the ‘yellows’ are doing well too. Even two of the ‘Spikies’ have done alright. Here are some that I don’t think I’ve mentioned before:

Galanthus ‘Desdemona’ is a quite distinctive double, rather tall.

I believe ‘Desdemona’ is one of a series of double snowdrops named after Shakespearian women. I also grow ‘Cordelia’, ‘Ophelia’ and ‘Hippolyta’.

The other snowdrop is here as ‘Windy Ridge hybrid’. I know nothing of this, except that it appears to be a G. plicatus x elwesii hybrid, and that there is a Windyridge nursery in Dublin, where I visited last January. It is a very nice snowdrop and Irish ‘drops’ do well here. 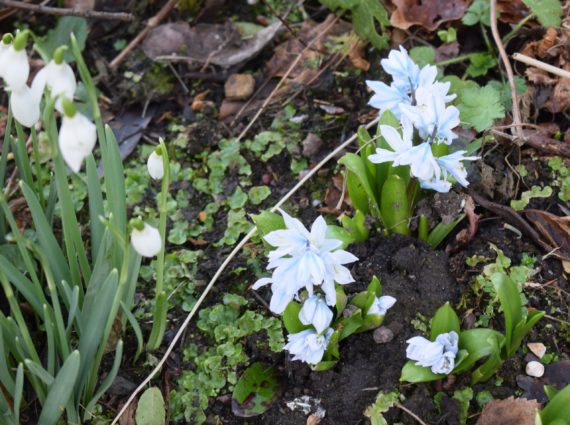 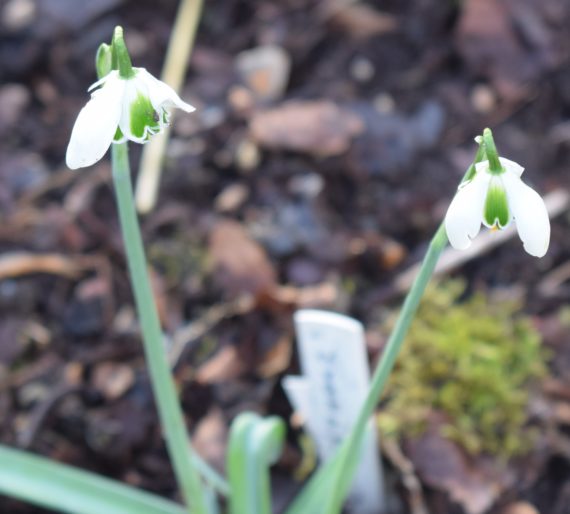 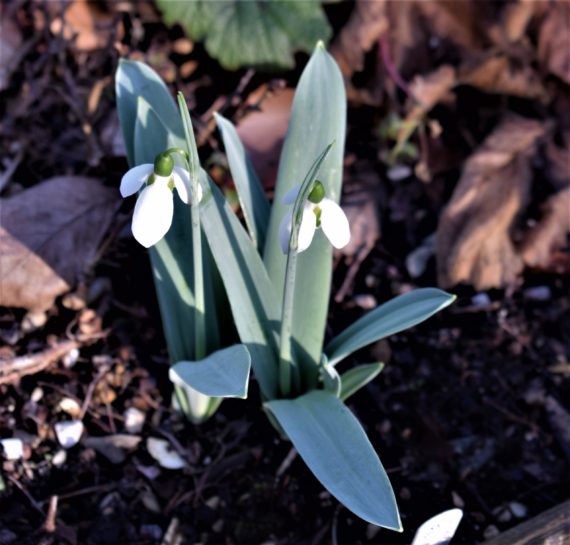 One very nice addition to the early-flowering Porophyllum saxifrages has been S. alpigena.  I got this from Aberconwy last spring and planted it in a trough against a small lump of homemade tufa. This flourished too late to be included in my recent article in the Saxifrage Magazine, where I celebrate the longevity of Porophyllum species (in contrast to most hybrids), including several Himalayan species. S. alpigena seems to be following this dictum, although I hadn’t expected it to flower so early – too early for any of the shows.

I’ve featured the Czech hybrid Saxifraga ‘Lozjicka’ before. It breaks most of my rules in that it: a) is a long-lived hybrid sax, b) thrives under glass, and c) seems not to need regular repotting. Nonetheless, here it is again, better than ever having thrived on near-neglect, and probably far to early for any show.

I’ve grown Saxifraga ‘Johann Kellerer’ for half a century. Like many of the oldest hybrids, it has been much more long-lived here than most. It is unspectacular, yet I have a soft spot for its early, pinkish flowers. When I reworked part of the terrace rock garden last year, I dibbed in several cuttings. They have all thrived – you can see them in the pictures with Crocus ‘Bowles Yellow’.

Another Porophyllum I’ve propagated recently is Saxifraga burserana, probably in the clone ‘Gloria’ (a Farrer introduction I believe, so once again more than a century old). This had nearly stopped flowering in its niche in the limestone wall. However, it is incredibly easy to propagate these Porophyllum species. Just take a couple of rosettes with a bit of bare stem and insert them into their final destination. They like to be up against a rock (or tufa) and you can do it at almost any time of year (except the full heat of summer). Here is one of these year-old cuttings, growing away well in a trough with a pair of flowers. 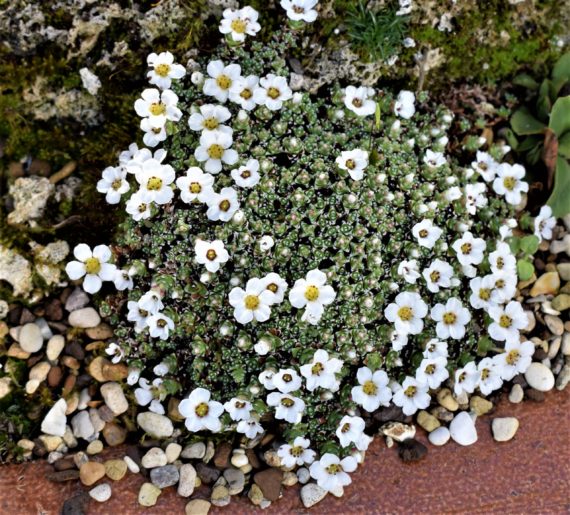 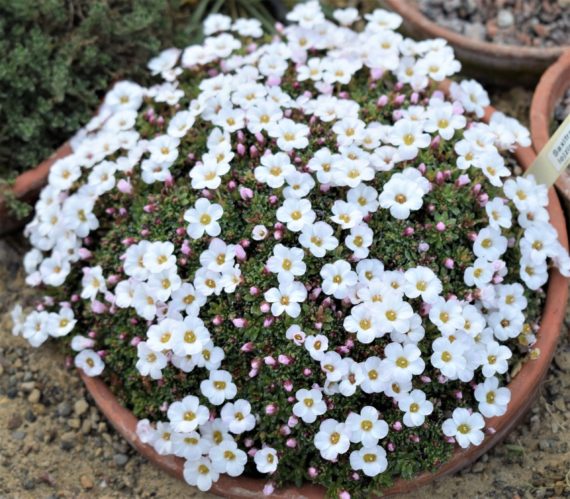 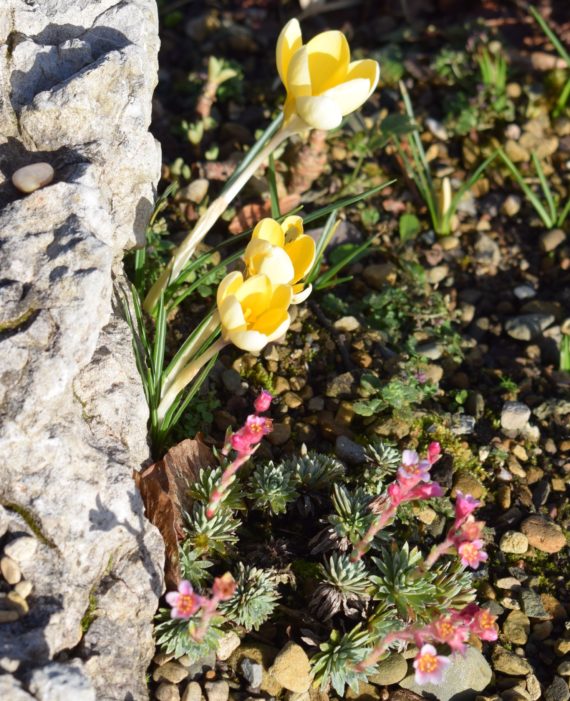 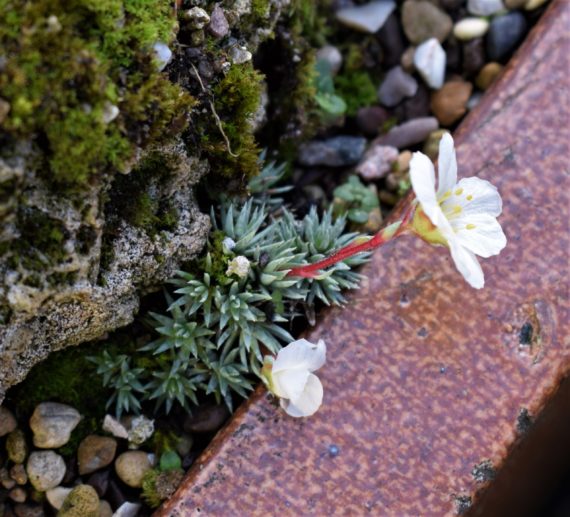 The garden is full of hellebores at present and hopefully they’ll come through the storms unscathed. Many of these are self-sown. In some parts of the garden they are a muddy red, in others delightful shell-pinks and delicate off-whites with nice internal markings. I think a counsel of perfection is to deadhead those you like the least, leaving the nicest to self-sow, if they do that for you.

The range of good hellebores available to the gardener has expanded hugely in recent years. One of the best is the unfortunately named ‘Winter Darling’, a H. x ericsmithii clone (i.e. H. niger x H. lividus x H. argutifolius). This is a superb plant, but I would warn that it grows fast and so is liable to overwhelm its neighbours. It’s helpful to remove many outer leaves in early winter to help reveal the flowers and free-up surrounding plantings. 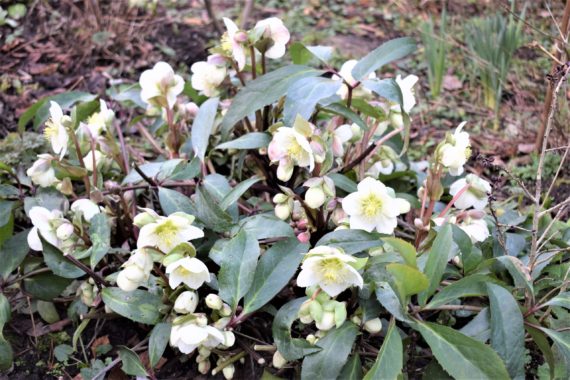 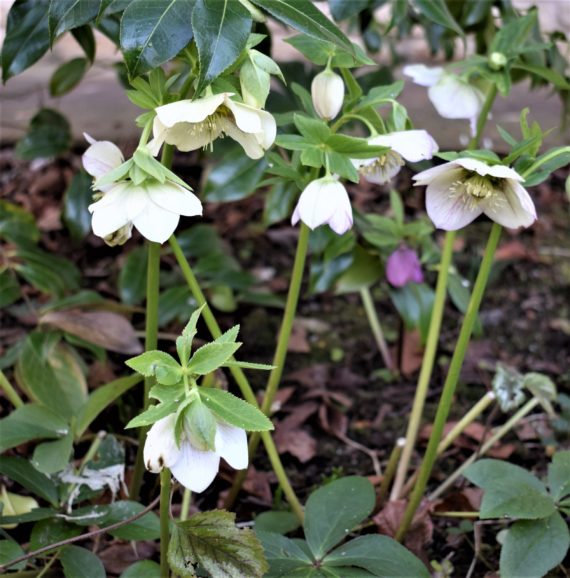 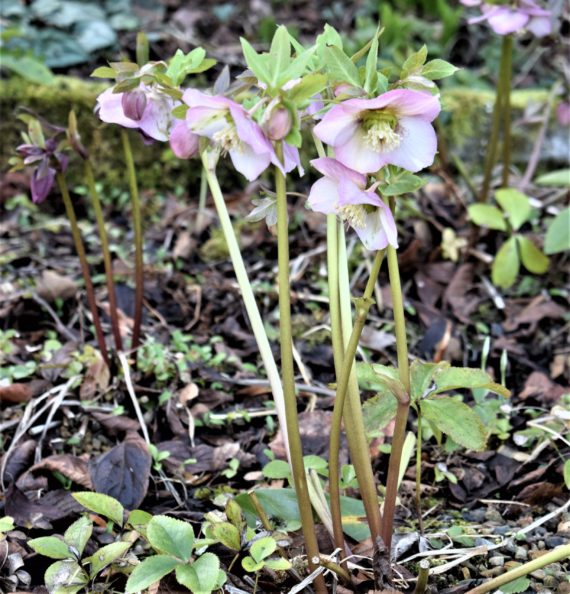