A Close Look at Primula

With nearly 440 species, Primula is a massive genus. It is divided into over 30 ‘sections’ (which group similar species together) and is native in four continents.

The majority are mountain plants, mostly flowering in spring. So it is no surprise to find these among the most popular of plants for the alpine grower. (Time for a short interlude.)

Recently the AGS diarists held a virtual meeting, which was pleasant and constructive. One suggestion was that our contributions be more ‘themed.’ Hence, I’ve elected to concentrate this entry on my favourite genus.

Normally I write about plants, gardens, or wild plants and locations that I’ve encountered since my last entry. Having thought long and hard, I don’t want to change this (self-imposed) stricture.

So, these are primulas that have flowered over the last three weeks and (due to the lockdown) only here, in my garden. Right, interlude over!

This has proved a good year for the flowering of European Primula species, not least Primula clusiana.

This is one of the four ‘Arthritica’ species. They’re all closely related one to another, and each with their own small distribution in the south-east Alps.

Primula clusiana is confined to the mountains south of Vienna, where I saw it years ago on the Schneeberg. This group are not particularly difficult to grow. However, they tend to be shy flowering after their first year, so this display was very welcome. 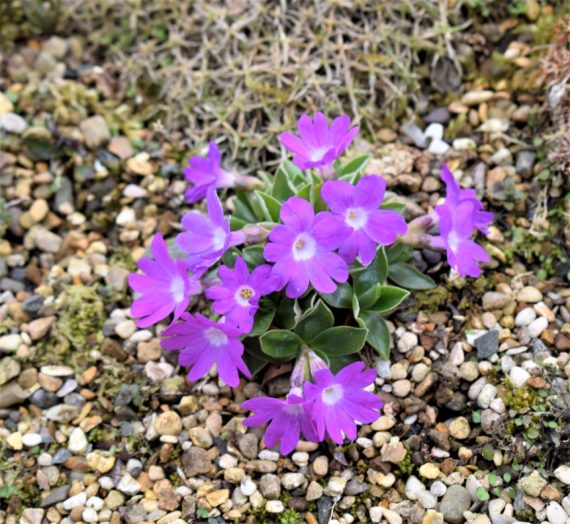 Primula albenensis is another European Primula. It is restricted to two small areas in the north-western Bergamasque Alps, east of Lake Como, especially Monte Alben for which is named.

It was only discovered and described new to science in the 1990’s.

I find it fairly easy to grow in the alpine house, but slow. I originally received it from my old friend, the late Terry Teal. 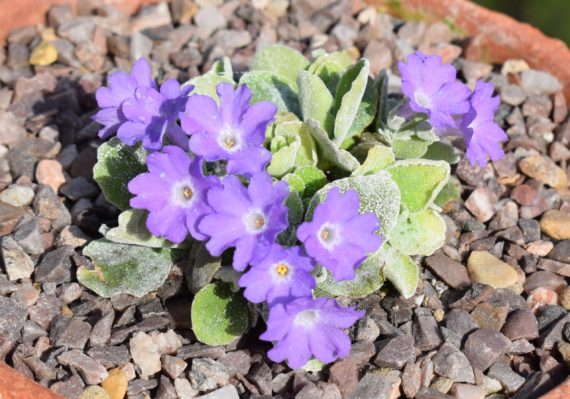 Species in the section Sphondylia have been named ‘desert Primula’ because they are found in dry areas such as Ethiopia, Saudi Arabia, Egypt, Iran and Afghanistan.

Having said that, they actually grow beside springs, streams and even waterfalls, in ravines, wadis and north-facing cliffs where they are humid and cool.

They’re not the hardiest of plants, but under glass will happily go down to about -6C. I generally grow three or four species, planted out in the alpine house.

The easiest is not a wild plant, but a true-breeding hybrid which arose at Kew a century ago. It is called Primula kewensis.

One of its parents, the Saudi Primula verticillata is farinose (has a powdery coating), and the other, from north west India, Primula floribunda, lacks farina. This means that some Primula kewensis have farina and others don’t! 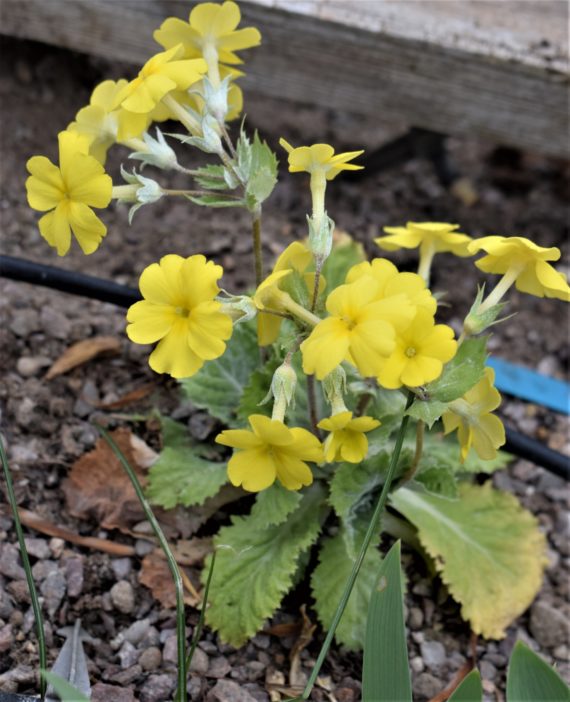 The Afghan Primula edelbergii is much rarer in cultivation.

I was given a bit of this recently, under another name, and it is flowering now. I regret I’ve forgotten who the kind donor was, and would be delighted to find out! 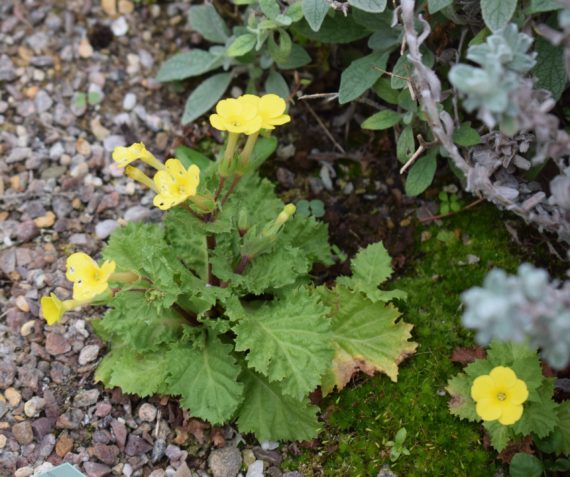 For a time, I was besotted with Asiatic primulas. I was particularly fond of those classified in section Petiolares. Indeed, they were my first love and caused me to study primulas for much of my life.

In recent years, my collection has suffered from devastating outbreaks of virus (sound familiar?). I’ve only just started growing this group again, having been in Primula virus lockdown.

Primula ‘Netta Dennis’ was raised by the late John Dennis and named for his wife. It comes from intentional crosses between Primula aureata and Primula gracilipes, both Nepalese species.

It is a lovely thing, arguably superior to either parent, and certainly easier to grow. 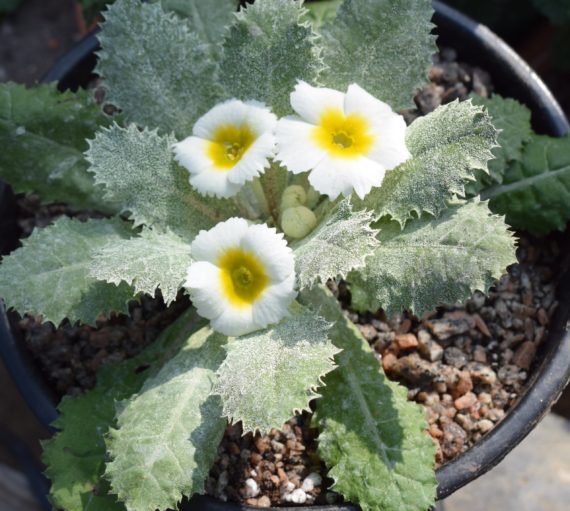 The history of Primula petelotii is very strange. It’s only one of two primulas to grow in north Vietnam. It was brought back from there some 25 years ago by a noted expert and introducer of trees and shrubs.

Out of flower at the time, it was thought to be a gesneriad (African violet)!

In fact it’s the only member of section Chartacea in cultivation. The section’s name comes from the Latin for ‘paper’ and it is named for the parchment-like leaves of the species within it.

Although not the hardiest (my plant was singed by -6C under glass last winter), and requiring cool humid conditions in summer, it has flourished in cultivation and a number of wonderful specimens have appeared on the showbench.

My plant is not yet in full flower (says he!). 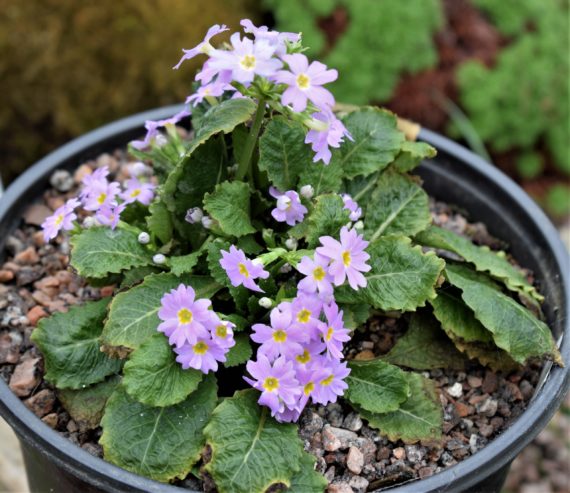 Primula denticulata is, of course, a good deal less exotic, but it is a variable plant, and this vigorous form of v. alba is an excellent garden plant if fed well and never allowed to dry out. 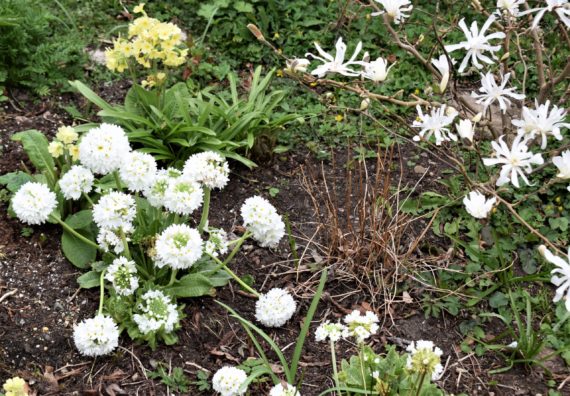 …And an American Primula

As I said, primulas come from many places, and if a species from Saudi sounds unlikely, then what about Guatemala?

Nevertheless, the southernmost of the section Parryi species from north America, strays into central America.

Primula rusbyi is a lovely thing and, at present, a vigorous new introduction (hopefully virus-free!) is doing the rounds. Again, I grow it in the alpine house, but keep it cool, on the greenhouse floor, in summer. 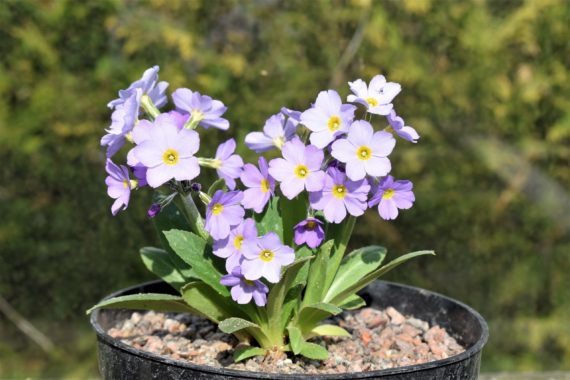 A Primula of Mine Own

Regular followers of this diary will know that I have raised a short series of crosses over several generations. The ultimate parent of these is Harold McBride’s lovely blue P. ‘Waverley’.

I’ve used names which pun on ‘out of Waverley.’ Unfortunately, the attractive P. ‘Flying Scotsman’ proved short-lived and like many Gresley Pacifics broke down early in its journey (originating in Reading – I am a Swindon man myself!).

Turning to the unreadable Sir Walter, this one is labelled ‘Ivanhoe.’ The flowers are rather small, but a lovely colour and it forms a big plant. 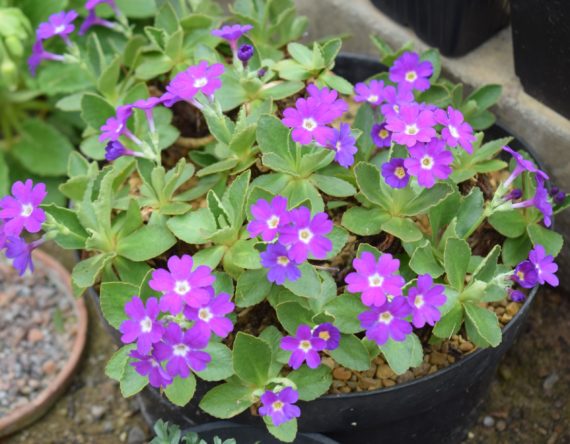 The sad death of Lee Martin has been well remembered elsewhere on the site, but as Narcissus obesus ‘Lee Martin’ is in full flower in the alpine house, it gives me a chance also to pay tribute to this superb plantsman and lovely character.

Lee and I lived at opposite ends of the country, so we only met occasionally at Shows such as Harlow and Loughborough. Nevertheless, we got on extremely well, and I found him very good company.

His show plants were legendary, and as in the case of this narcissus, he had a good eye for an excellent plant. Deep sympathy to Julie, his partner in the garden as well as in life. 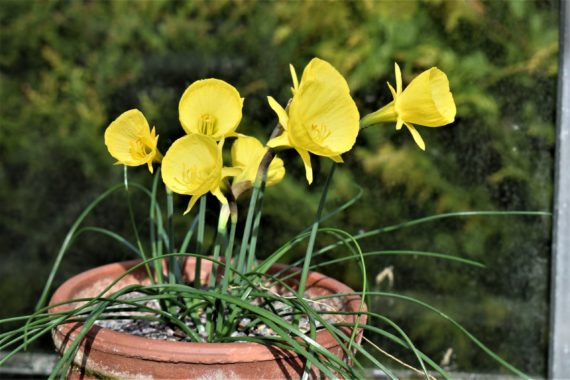 Another 20 or more candidates queue for attention, but I shall be brief.

It’s always a joy when a bulb carefully tended over six years or more finally comes to flower.

On a trip to Provence some Junes ago, I collected a pod of Fritillaria involucrata seed. After two years the seedlings were repotted in bulk, and the tiny bulbs moved on annually in August, kept moist in winter, dry in summer.

This year, two have produced flowers, and very nice too. 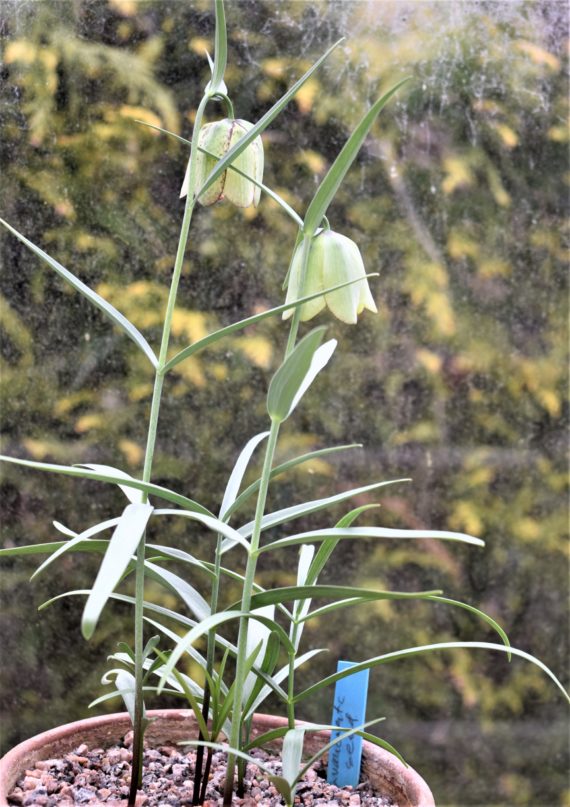 About ten different Erythronium species flower here each spring, staggered, so that there is some interest over some eight weeks.

One of the later ones, grown from seed, has lost its label, but I think it must be Erythronium elegans, a white-flowered relative of Erythronium revolutum.

Even using the monograph ‘The genus Erythronium’ (Chris Clennett, Kew Publishing), American Erythroniums are not easy to tell apart, certainly for a botanist such as I! 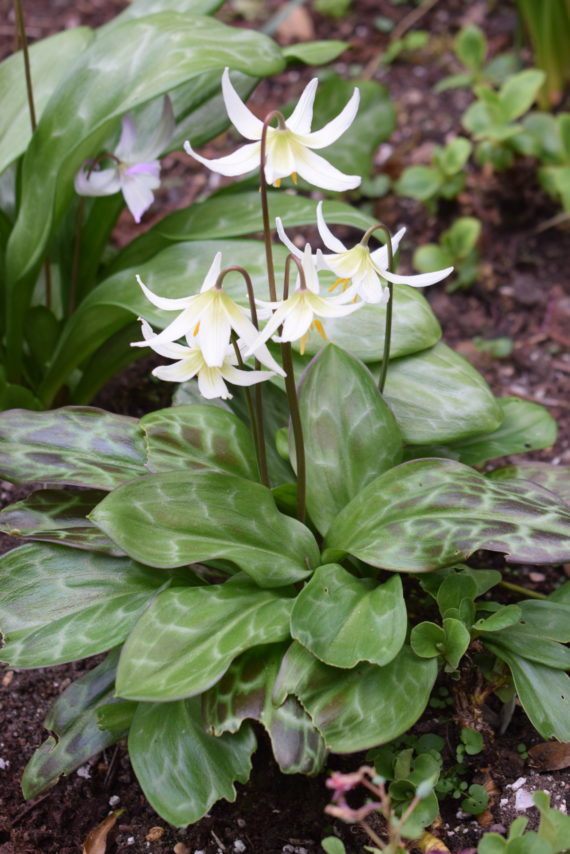 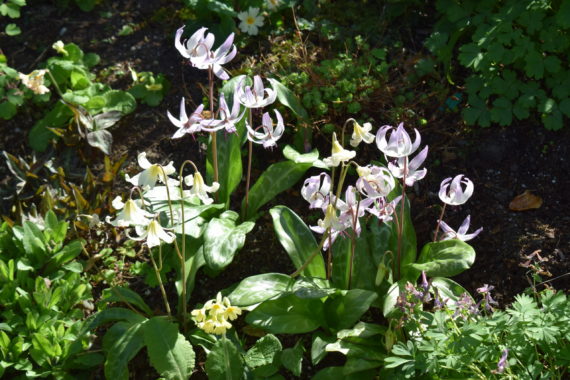 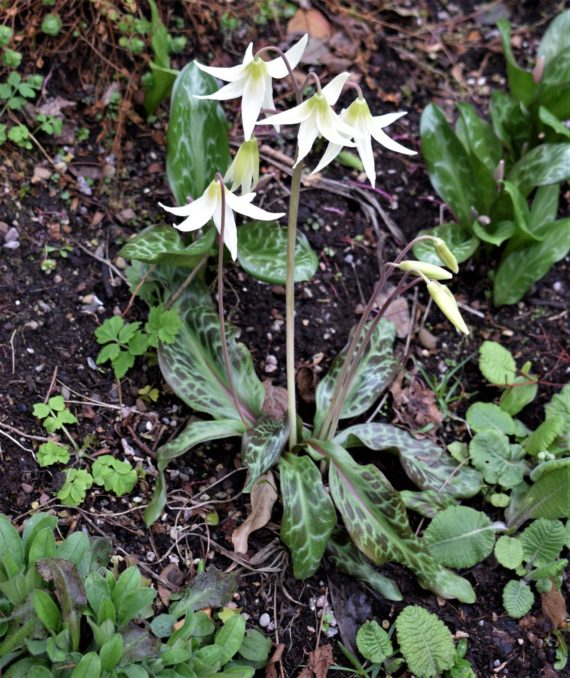 Finally, three years ago, I decided to build a miniature garden with an aim to exhibit it at Shows after a few years.

Judging them, I know that maturity is one of the key factors for success, so these are definitely long-term projects.

Most winning exhibits are based on tufa, and not having a decent lump of the real thing to hand, I used a lump of my own hand-made tufa (a mix of shredded lawn moss, perlite and cement). Holes were bored in this and many small cuttings, chiefly saxifrages and primulas inserted.

Care is taken that it does not dry out in summer when it is occasionally given a weak liquid feed, and it is turned from time to time, but otherwise it requires little attention.

Maybe, next year I shall have a chance to exhibit it! 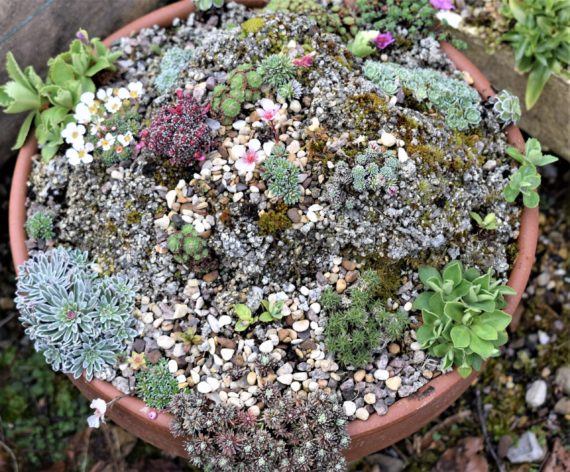