10 plants to grow for colour in September

September can be a difficult time in the alpine garden, or at least I have found it so here. October yields autumn bulbs, gentians, berries and autumn colour, but in our climate at least, September seems like the tired end of summer. Little is fresh or interesting. In this entry I am looking at 10 plants to grow for colour and interest.

Of course there are cyclamens and colchicums, of which more later on, but I thought I would first mention a few slightly less standard subjects that have proved to be rewarding here in the early autumn.

I have grown Eucomis bicolor for many years, but it had become neglected and overgrown and stopped flowering. Unlike the other Eucomis I have tried here, it is undoubtedly completely hardy in north-east England. A few years ago I rescued a large clump and planted it in fresh compost (from the compost heap) in good light and it has thrived. I had the foresight to accompany it with two other September-flowering stalwarts, the wonderful form of Roscoea purpurea ‘Royal Purple’, raised by Robin White and disseminated by John Massey, and the latest and best yellow Crocosmia here, ‘George Davidson’. Although I grow all three plants elsewhere in the garden too, the combination of the three has been outstanding and has given me much pleasure. 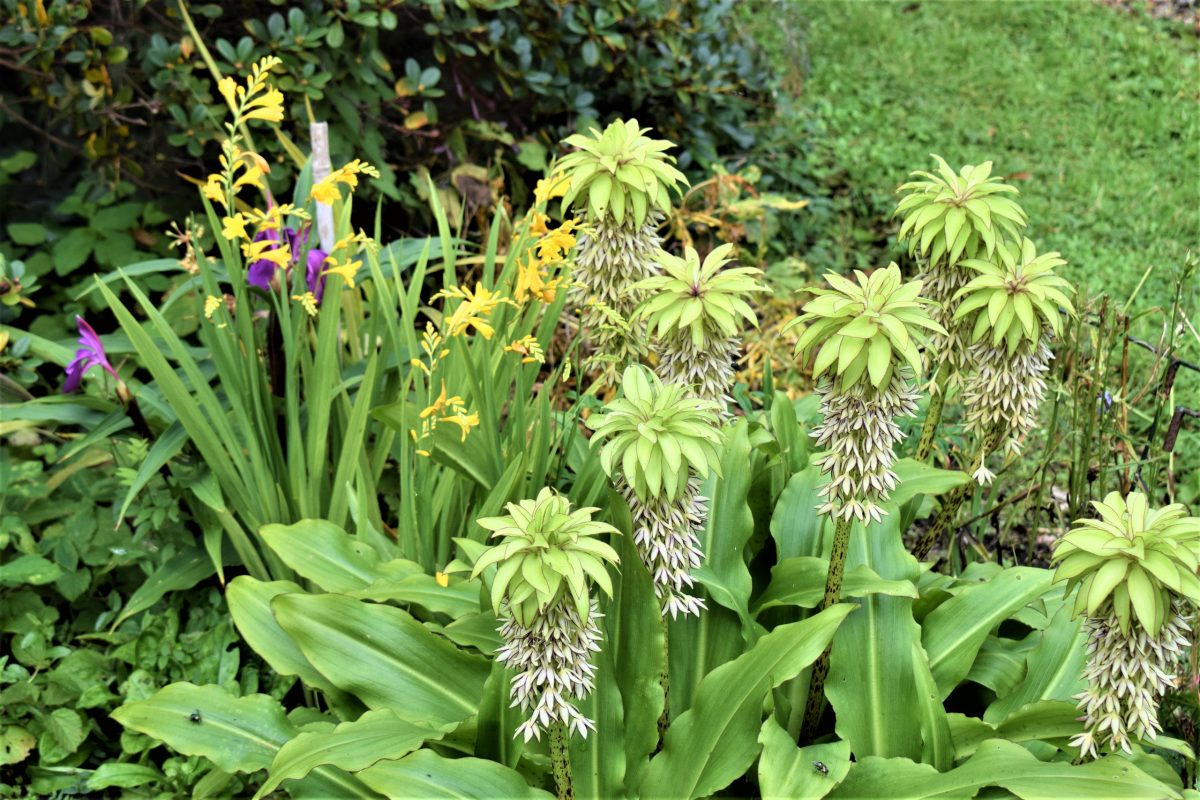 Another cultivar of fairly recent origin which lights up September gloom is the relatively dwarf Anemone called ‘Wild Swan’. This is soundly perennial and slowly occupies more ground. If it is split and replanted into fresh ground every few years, it seems to flower more freely. 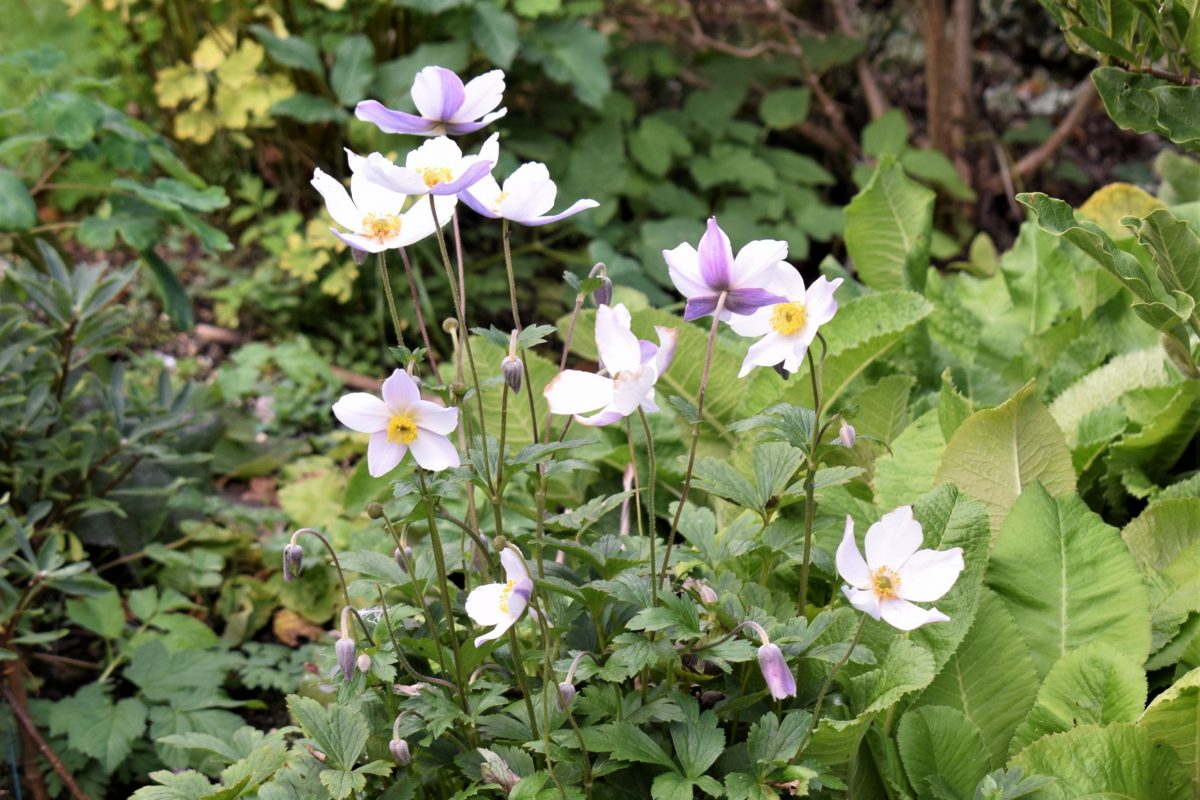 Most of the autumn gentians flower in October here, hopefully in time for our two shows: Harlow Carr on the 9th, and Hyde Hall on the 23rd.

The hybrid raised by Ian McNaughton however, which he named ‘Balmoral’ flowers a full month earlier than the others, and so is a very attractive September filler. Like the rest of the autumn gentians here I grow it in a plastic pot, repotted every March. In the ground I find that they straggle, flower more poorly, and suffer from slugs and snails. 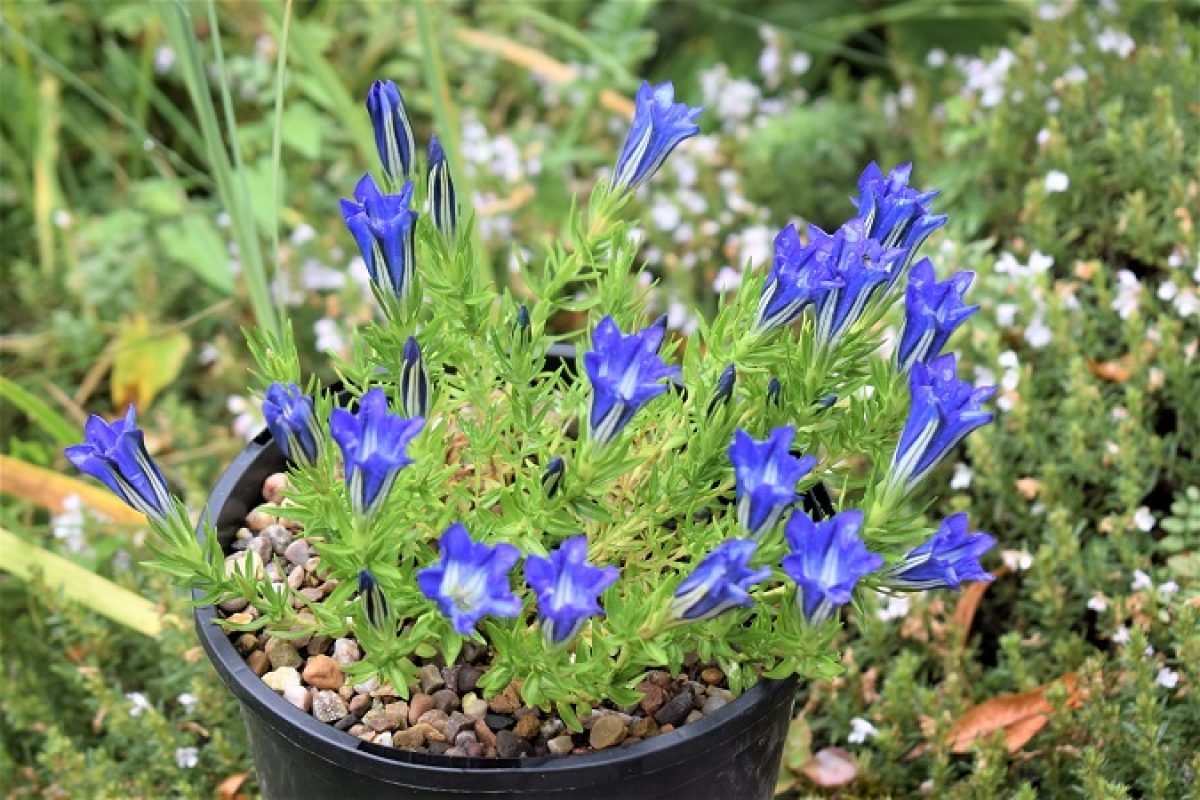 However, I do grow Gentiana cachemirica in the open ground, at the edge of a sand-bed. Grown from seed, it has survived here and expanded, and flowers moderately well every September. Despite this, the yellowing foliage suggests that it is short of some essential nutrients. This species is fairly unusual in cultivation, and seems to require good drainage but plenty of water, but if you can get hold of it, I think it well worth a try. 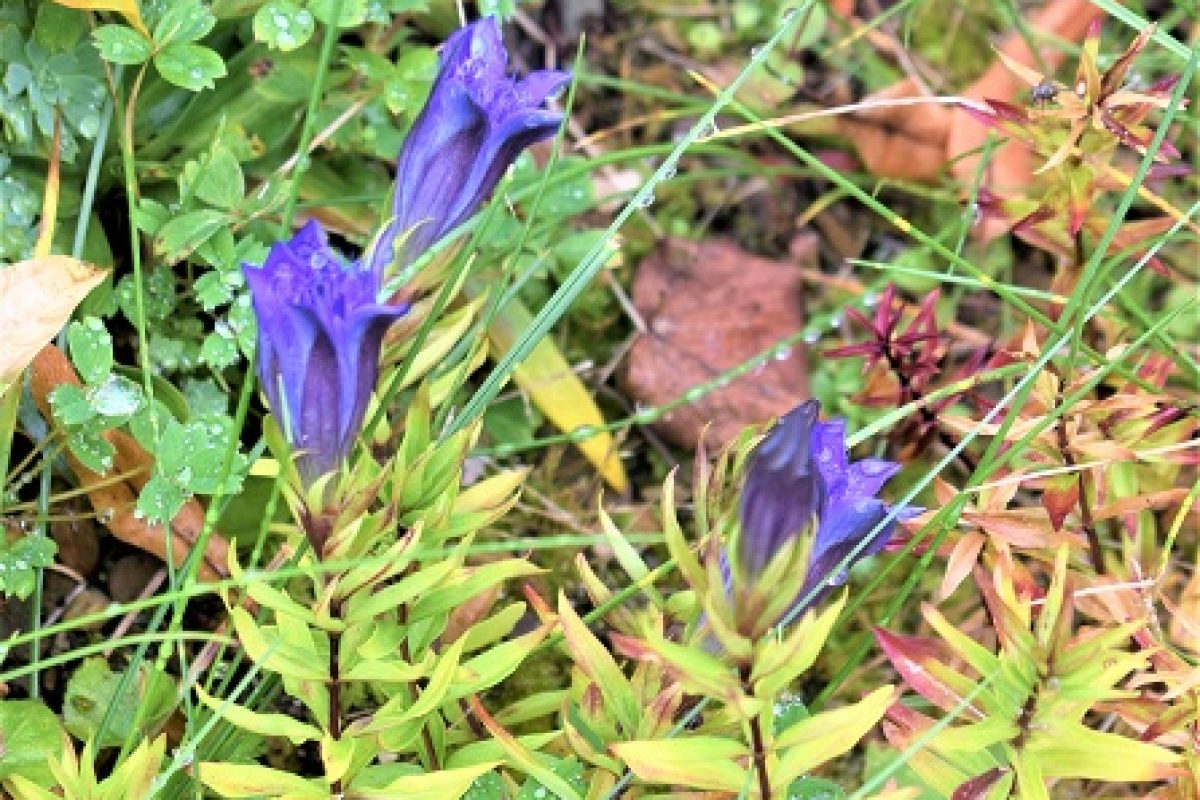 I am sure I should grow more Cyananthus (and Codonopsis, none of which have survived here for long). At the moment, the only cyananthus I grow seems to be C. microphyllus. C. lobatus and C. integer are not dissimilar and probably just as good. This has flourished in a rather weedy part of one sand-bed where several plants have got out of hand, not least Potentilla eriocarpa which also appear in the accompanying photos, making an interesting association. 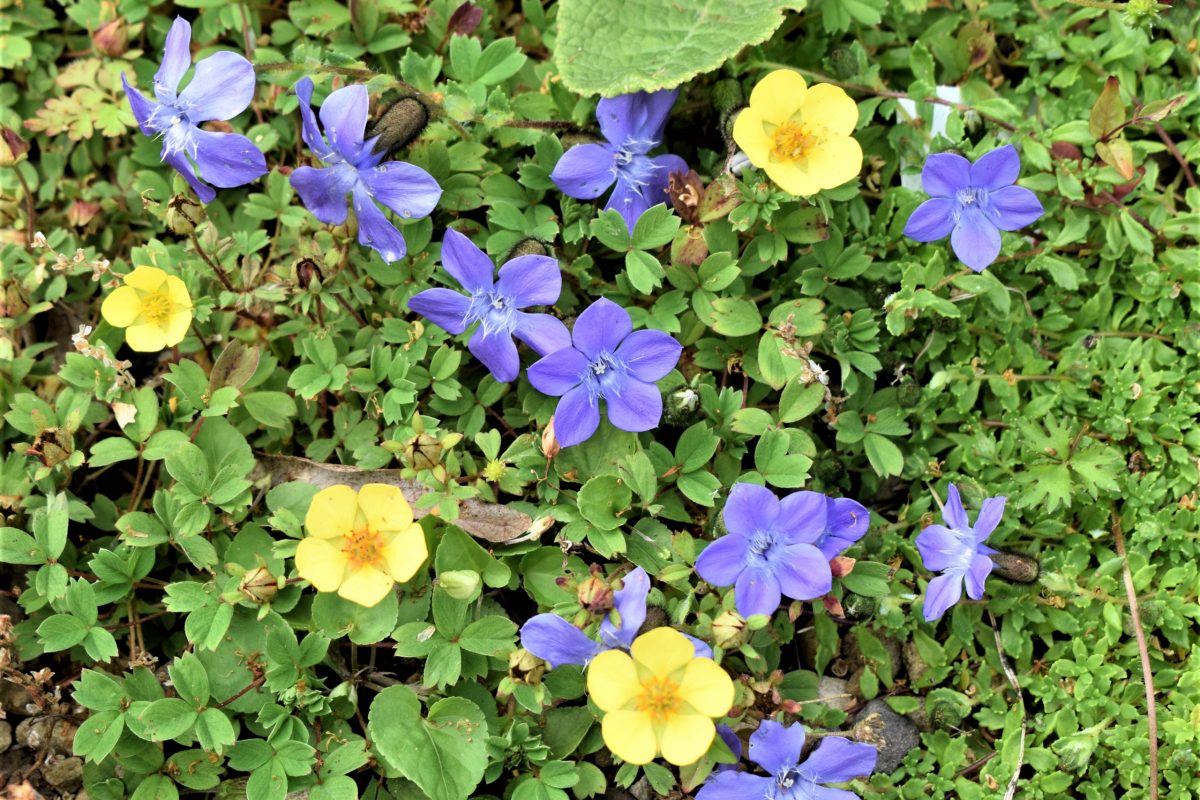 I am told that Zauschnerias should be placed in the genus Epilobium. This strikes me as one of the most bizarre and absurd consequences of all-pervasive cladism in plant classification. Presumably, in an attempt to include within Epilobium some of its more wayward traditional elements, it became necessary to enlarge the genus so much that Pacific coast plants with scarlet, tubular, zygomorphic (hummingbird-pollinated) flowers had to be included. It would have been far better if the genus Epilobium had been split up more instead. Zauschnerias are so obviously a distinctive, natural group that they are obvious candidates for generic status.

We only grow one species here, Z. angustifolia which long ago spread to form a large colony in a well-drained sunny corner. The Zauschneria is a tidy plant, disappearing for six months of the year, although it pays to tidy up the dead foliage around Christmas time. 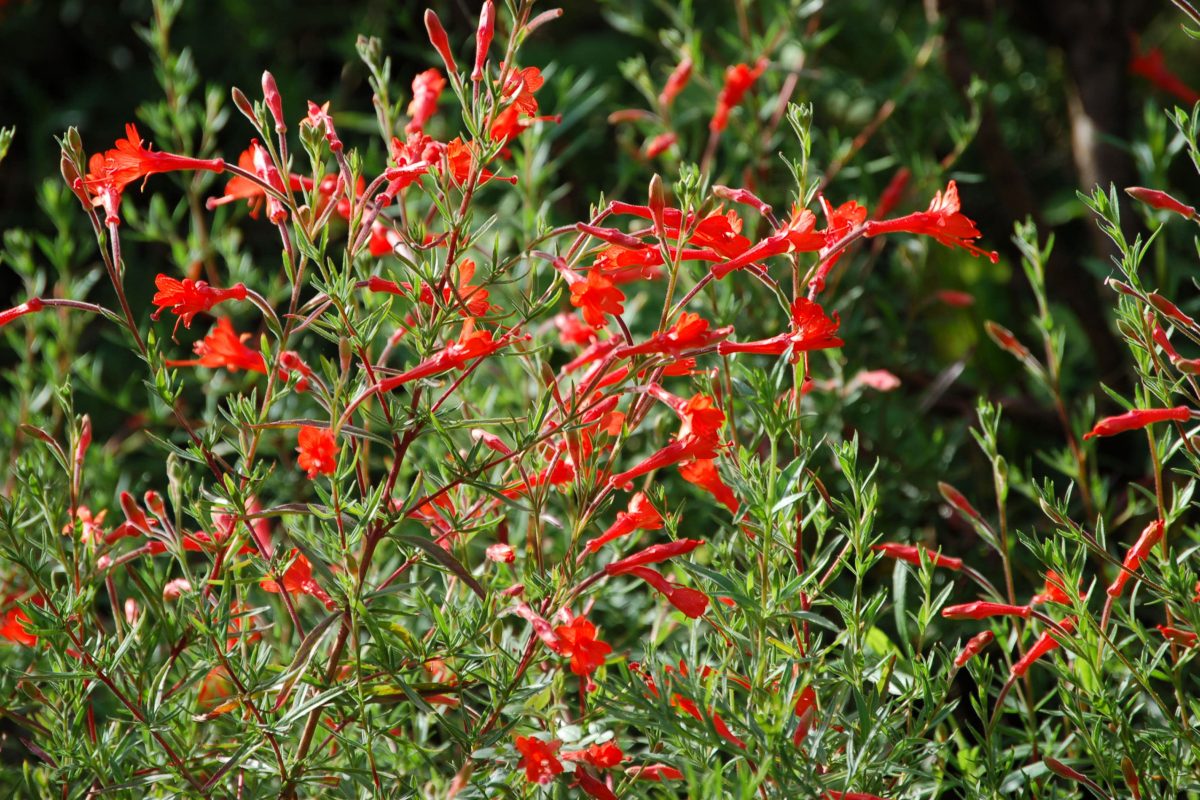 Kirengeshoma palmata has long been one of my favourite plants. Far too large to be thought of an alpine, it nevertheless has that austere class of a thoroughbred species. I grow it in considerable shade and competition, in two places, and in both it holds its own with ease and performs well every September. 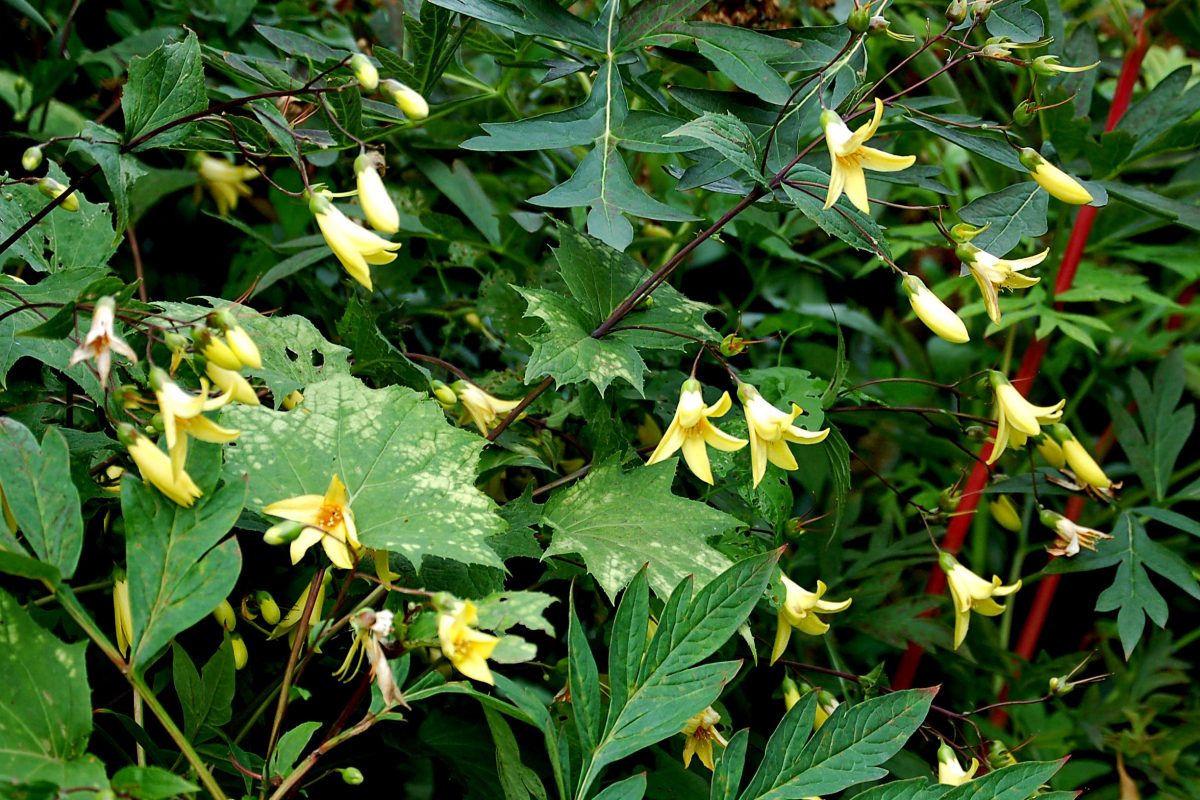 I said I would mention cyclamens and colchicums. Cyclamen hederifolium is of course an amazing plant that every garden should grow in quantity. It flourishes in the most unlikely places, in dry shade, and up against tree bases and roots. It seems to relish soil poverty. Here it has even invaded the edges of our ‘meadow’, flowering after the grass is cut. We have a variety of flower colours, but also leaf forms and patterns. The leaves are most decorative through the winter and spring. I love the white form, pictured here, which lights up the darkest corners. 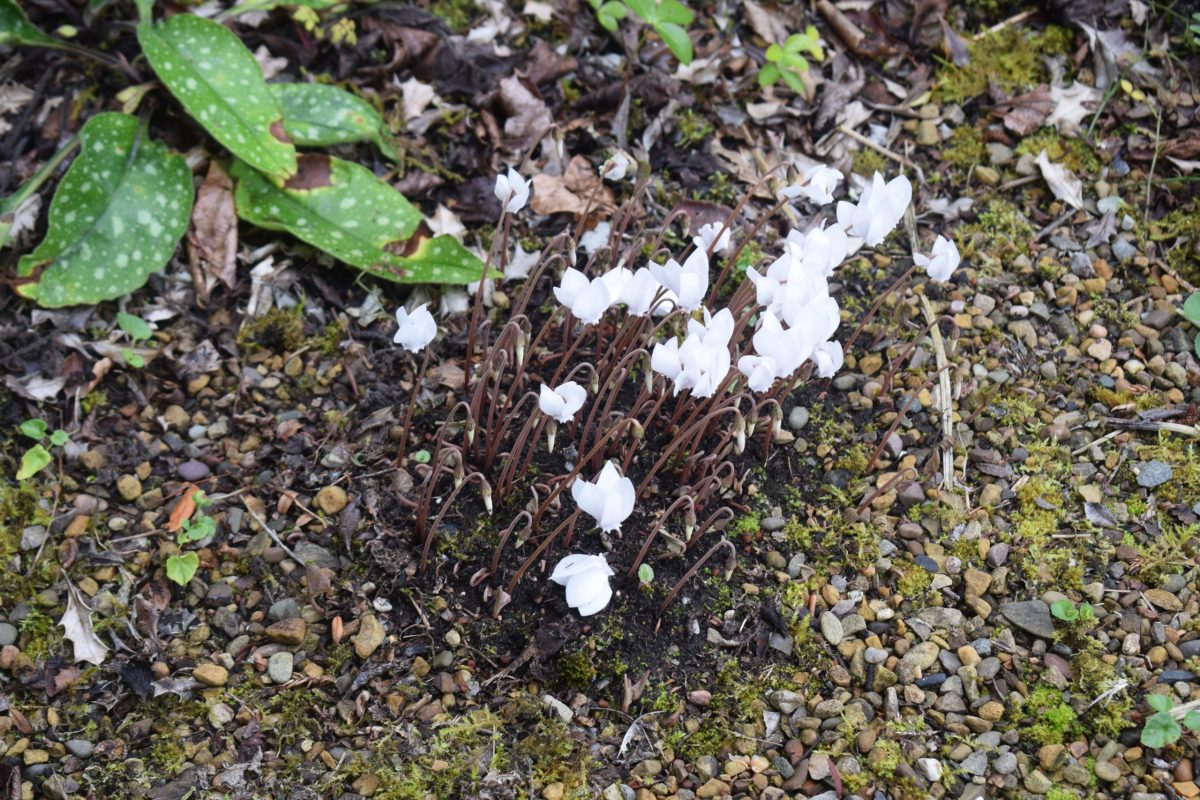 The larger colchicums are another matter. I have a ‘love/hate’ relationship with them. At the present time, when flowers are forcing their way through the ground, they are lovely things. But later, the flowers droop and straggle, the leaves take up far too much space for a large part of the year, and are very ugly when they die back. Probably they are best in the wild garden, under shrubs or in meadow grass, mown for hay. I have been removing them from many of the more cultivated parts of the garden. Here they get tangled up with perennial weeds, and most of ours now thrive, like the cyclamens, in ‘difficult’ corners where they can do no harm. 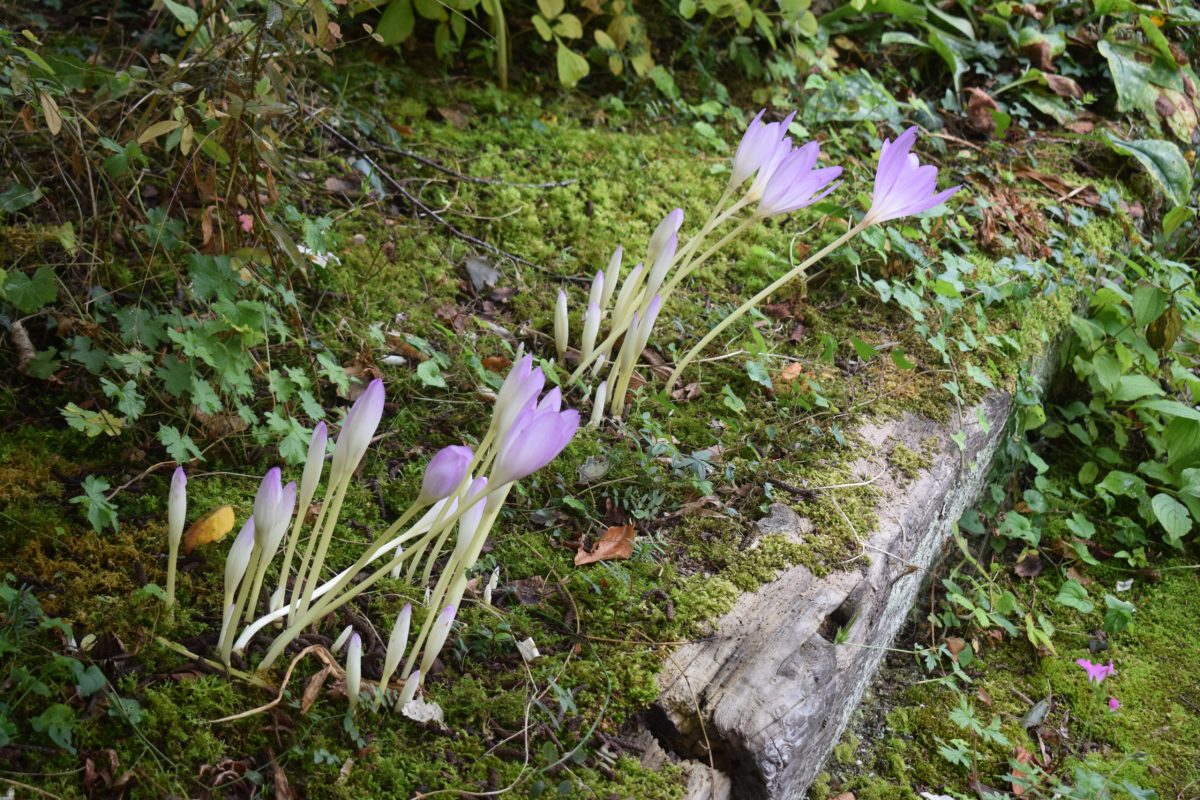 Many successes in this garden, are serendipitous, not least the situation I am about to describe. Of our two alpine houses, one has automatic watering. A so-called computer, really a clock-controlled valve, delivers water through drip-feeds twice a day. Most plant pots are sunk in a sand plunge which has pavers as sides. The drips keep the sand moist and the water eventually passes to the floor and underneath the pavers. This keeps the alpine house floor damp and cool, to the benefit of plants in the shade on the floor, and indeed the whole house.

The water eventually seeps out of the door and down a slight gradient into my main propagation area. This consists of about 10 cm of fine gravel overlying rather heavy clay subsoil, on which large numbers of plants in plastic pots stand. Those which stand directly onto the gravel are in basal contact with the water flow. A great benefit during absences, as they never need watering! Those that I judge need a slightly drier regime stand in plastic trays. They are thus protected from the moisture film, although they remain in a humid atmosphere. Of course the watering is switched off between mid-October and March keeping these areas much drier in winter. (10) 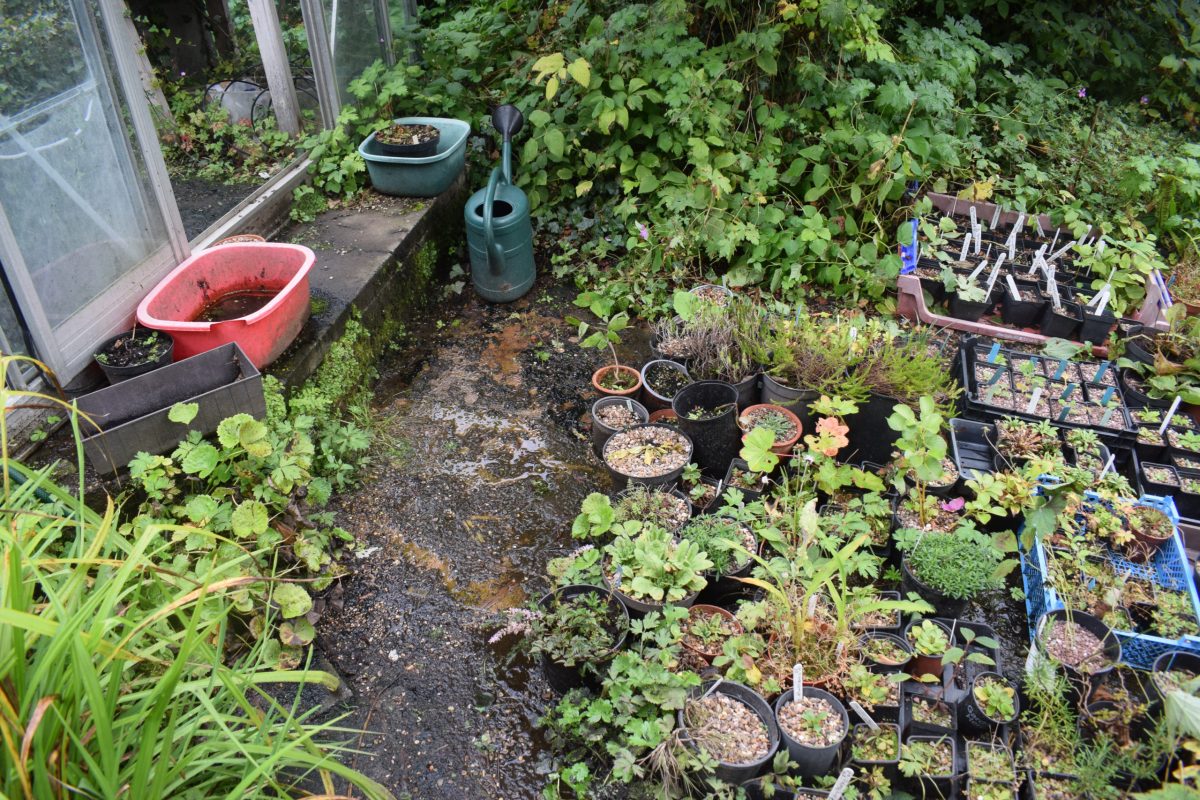 I have found that plants such as most primulas and meconopsis love being stood on this wet gravel. This has been most dramatic for two difficult primulas, P. reidii and P. minor. Both species have multiplied well and look in the best of health. I think the judgement as to when they should be weaned off the seep will be crucial. If they stay too long, they will surely rot!