Love alpines, but don’t know where to start? Here are 9 alpines for beginners to get you off to a roaring start!

Alpines are superb plants for the beginner gardener but also for more experienced gardeners looking to expand their range of plants.  Delicate, diminutive, yet tough and floriferous, once you’ve grown a few you will be hooked.  But which alpines are best for beginners?

In this diary I’m sharing descriptions and pictures of my favourites from my own garden.  For a longer list, John Good’s book Alpine Gardening for Beginners, provides many more great alpines for beginners.

Choose wisely and you will have a season of joy, with feature plants that will draw your eye and add unique decor to your outdoor space. 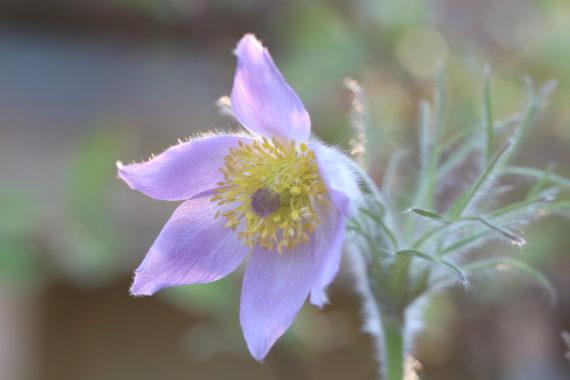 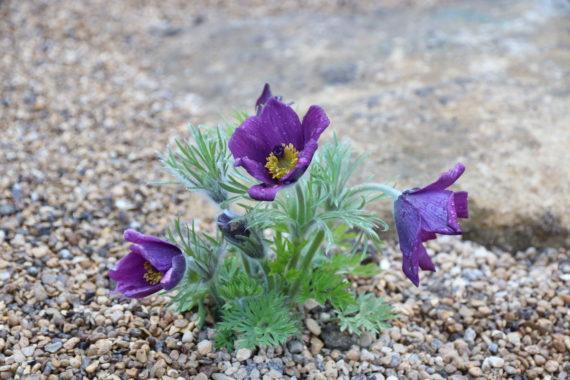 If you’re looking for a flower to give you a thrill in spring each year, look no further than the pasque flower.  It’s the type of flower that looks so beautiful that people assume it must be difficult to grow but they aren’t.

Keen wild-flower enthusiasts venture out each spring to find native drifts of these charming flowers in Britain’s chalk downlands.  They are also good-tempered and long-lived in a garden border, rock garden or raised bed, meaning they can be enjoyed up-close at home.

Pasque flowers have feathery, hairy foliage providing longer seasonal interest, dying down each winter.  However, it is the violet anemone-like flowers that really delight.  Its common name name relates to its flowering time – in or around Easter – but a large clump will throw up flower spikes over a 3-4 week flowering period.  The flowers are followed by pretty whorled seed-heads from which ripe seed can be harvested and sown.

I have had best success with plants bought from specialist suppliers or my local garden centre.  This is where beginners should start too as it takes a few years for seed grown plants to reach flowering size.  I have tried growing them in pots but they definitely grow stronger for me when planted in the ground.

Pulsatilla vulgaris in its native form is the colour of parma violet sweets. Many suppliers also sell named cultivars in varying shades which have performed very well in my new rock garden this spring. ‘Pinwheel Blue Violet’ is a dark purple form. ‘Rubra’ has a deep red flower. 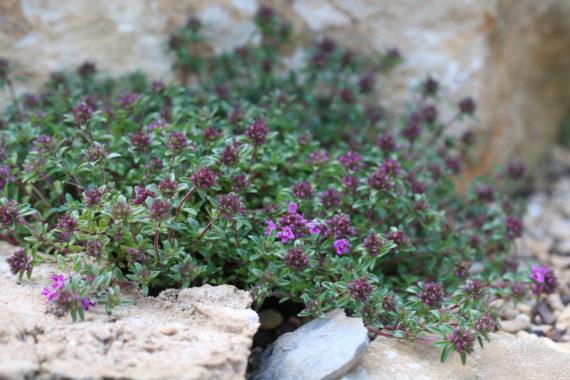 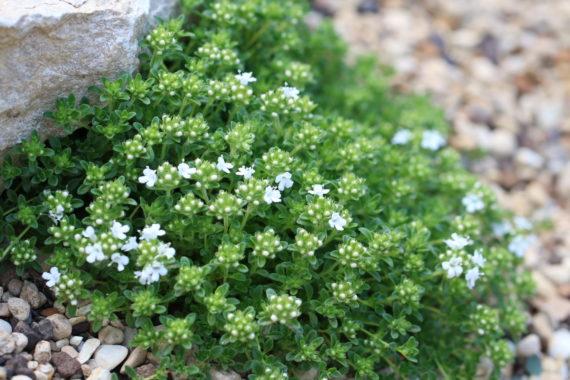 Creeping thyme is a low growing plant, which as its name suggests will spread and creep across stones and paving.  It is different from culinary thyme that you may use in cooking, although this could also grow in a rock garden or trough.

Creeping thyme is a very attractive and easy to grow alpine.  It has the advantage of being scented and evergreen but also has pretty flowers in summer.  Best of all it will work in many settings within a garden – equally happy in a trough, rock garden or even nestled in the cracks of crazy paving.

Famously, Prince Charles has a Thyme Walk at Highgrove made up of 20 thyme forms, including Thymus praecox.  These form an overlapping tapestry of flowering thymes jostling and spreading over stone paving and sets.

The thyme walk idea can easily be incorporated into a small garden with a sunny paved area.  Thymes can be used to soften the edges of even the ugly or cracked paving.  I have planted thyme at the front of my rock garden, where I’m hoping it will disguise some of the edges of the retaining wall.  I’m also keen to take cuttings and try and establish some thymes in the cracks of the steps. 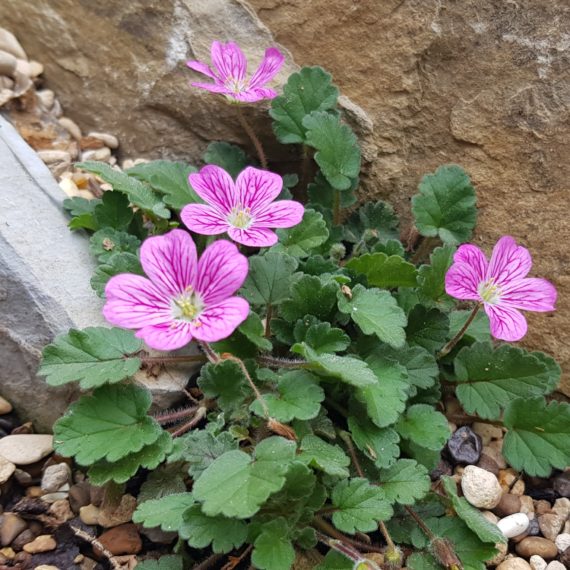 The flowers of erodium are charming, especially up close.  You will notice their resemblance to the flowers of cranesbills (hardy geraniums).

Erodiums slowly spread across the surface of a rock garden, raised bed, pot or trough.  They  usually have evergreen leaves, sometimes feathery in appearance, sometimes more flat and rounded.  The flowers are small but extremely beguiling up close and continue to arrive, in succession from spring into high summer.

This year I have grown for the first time a variety called ‘Bishop’s Form’ which has a candy pink flower with cerise veining.  I am also growing ‘Katherine Joy’ which carries its flowers on longer stems and has two larger upper petals with deep purple splodges. 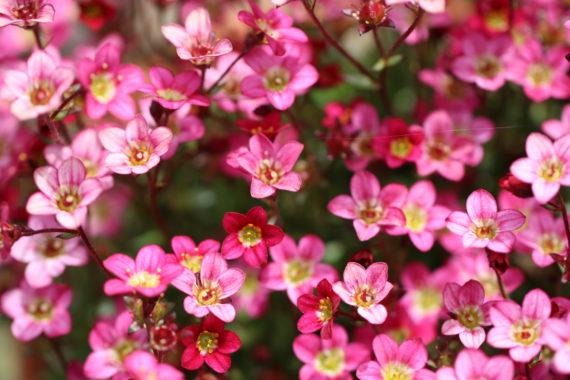 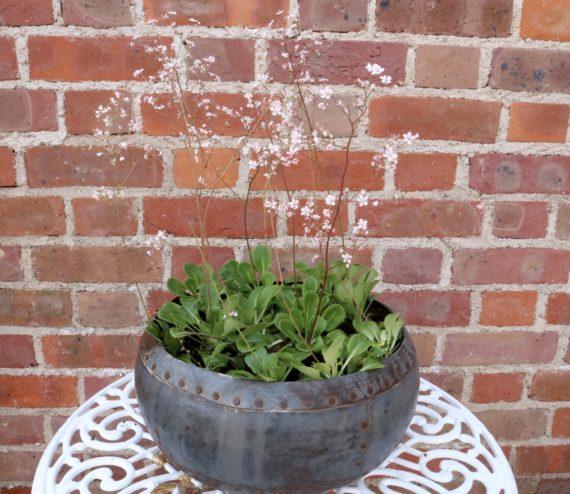 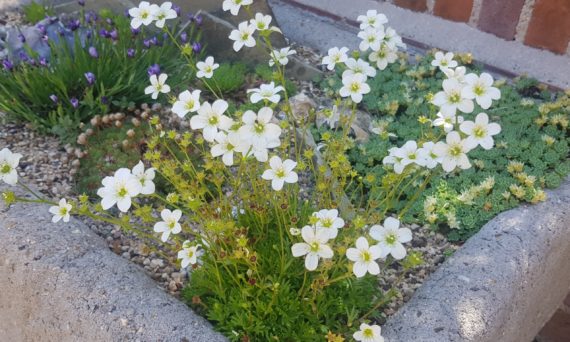 A huge array of alpine plants come under the saxifaga genus including primulas and campanulas.   Here I’m going to describe those that will likely have the catch-all name ‘Saxifrage’ on their label if bought from a garden centre. Some saxifrages have succulent-like leaves, others form cushions of leaves formed from tiny rosettes.

The so called mossy saxifrages are a good place to start.  These will adorn the alpine benches in any garden centre and will be hard to resist in flowering time.  White varieties really stand out as the light fades in the evening.  I’ve grown a variety called ‘White Star’ which was smothered in white flowers for 5 weeks.  I also grow a pink form called ‘Peter Pan’ which has very pretty rosy coloured flowers.  I have found it slightly less buxum than the white forms.

Also worth mentioning in this section is a saxifrage commonly known as ‘London Pride’, Saxifraga x urbium.  This has rosettes of fleshy succulent leaves forming large rosettes.  It will spread and creep through broken paving or at a border’s edge.  The flowers are borne on long wiry stems above the ground-level roestter.

Look closely at the flowers and you’ll see pink and yellow spots on the white petals.  I’ve grown this in a pot successfully although the following year the plants lacked vigour.   I think it is happiest in open ground.

Flowering time: April, May and June, depending on variety. 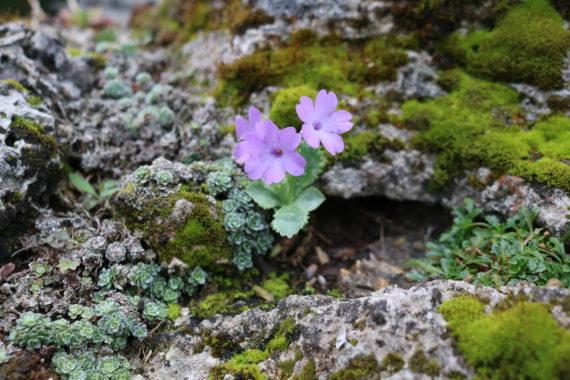 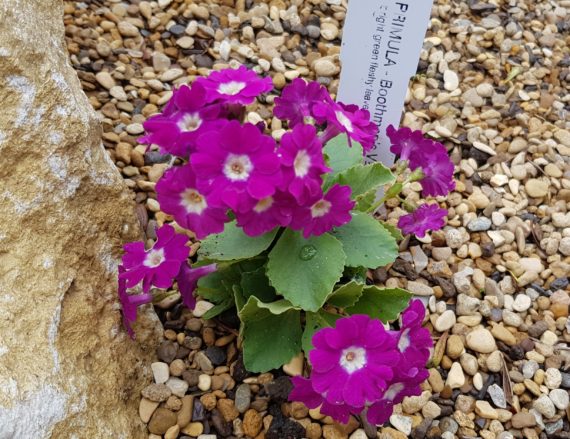 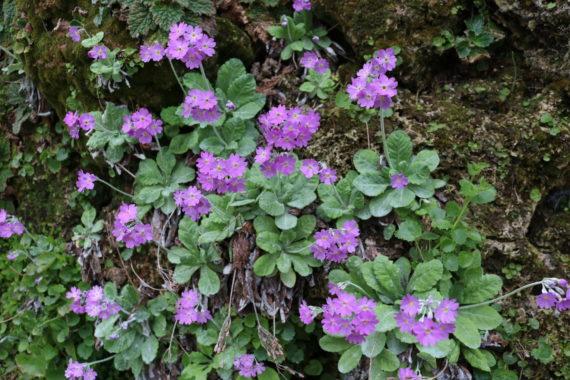 Posting on the Alpine Garden Society’s Members Facebook Group I was surprised how many members recommended these for beginners.  Many described primulas as the plant that first got them hooked on alpines.

At first sight, Primula marginata with its greyish leaves edged in silver, looks so dainty that I assumed they must be tricky to grow.  Apparently not.  I have seen these growing happily in tiny rock crannies.  They look charming growing in a trough or alpine bed.  A hybrid of Primula marginata called ‘Linda Pope’ is especially attractive.  The leaves of many primula gain a white flowery substance on their surface called ‘farina’ which adds to their delicate appeal.

Beginners beware, most primulas are easy to grow but some, such as the allioni group, detest winter wet and need growing in an alpine frame or house.  Stick to marginata, denticulata  or some of the simple alpine auriculas for your first foray into alpine primulas. 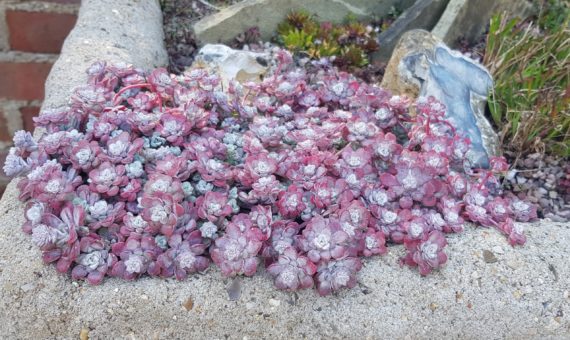 This is another group with a vast array of plants, many of which are ideally suited to beginner growers.  My book on alpines by Anna Griffiths says that almost all sedums are “doggedly good-tempered” so are a good place to start for the alpine first timer.

I have grown a few sedums for three or four years and have yet to lose one.  Over the years they have spread fairly quickly over my alpine troughs, usually in an irregular but attractive shape, gently curling over the stone edges and between rocks.

One of the best to start with is Sedum spathuliform ‘Cape Blanco’ which has small grey fleshy rosette resembling little french knots.  In early summer it develops yellow multiheaded flowers which aren’t terribly attractive.

My second favourite is Sedum pachyclados, which spreads by means of pale green rossettes and has frothy pink star shaped flower clusters in summer. 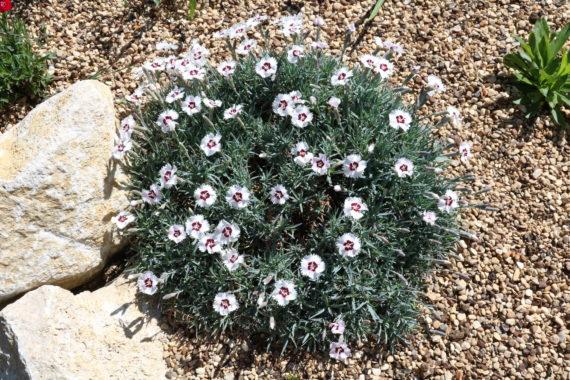 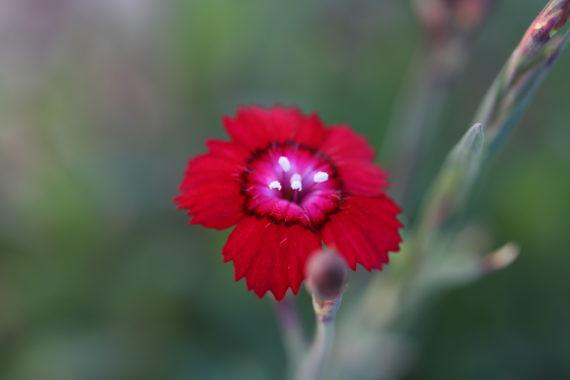 I have a dianthus, of an unknown name, which thrived in an alpine trough whilst my children were very young.  It was neglected and whilst many of the other plants around it failed, it never gave up.  Watered or not, through cold or wet winters then dry or overcast summers, it survived.  This is a sure sign of an easy to grow plant.  Now transplanted to my rockery it has spread to form a cushion 40cm in diameter bearing white and dark maroon miniature flowers.

Dianthus, like garden pinks and carnations, have an unmistakable pleasing scent when in flower. The fragrance drifts down teh rockery to my terrace in the sunshine.

Another great dianthus to try – known as the Maiden Pink – is Dianthus deltoides.  This is also an easy first alpine to try from seed and I grew 20+ plants from one tiny packet from the Alpine Garden Society Seed Exchange. 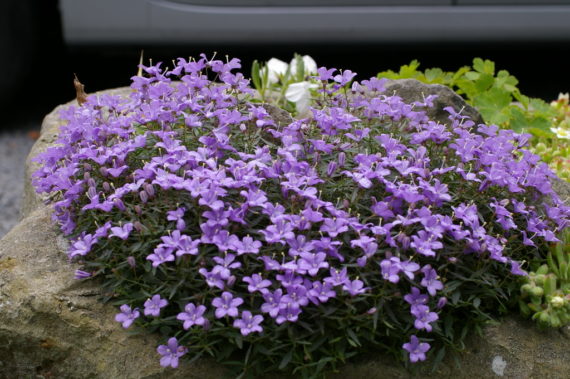 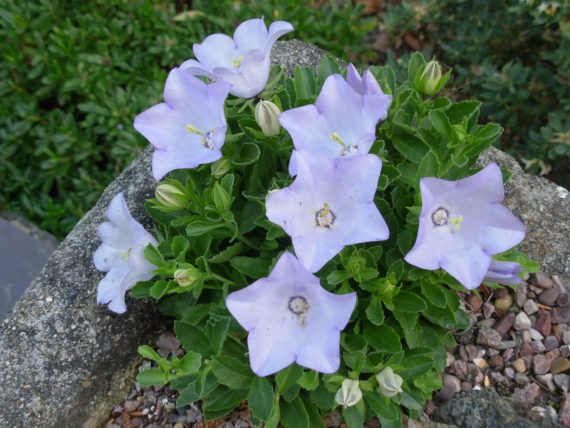 If you want tonnes of flowers in high summer on an easy to grow alpine then campanula is a good place to start.  The bell shaped flowers come in a wide range from white, through pale blue to dark purple.

Described by John Good as “common but indespensible” Campanula portenschlagiana is a purple flowering variety with a long summer flowering season.

Most campanulas have green leaves but I have added interest to my rock garden with a golden green leaf colour called Campanula garganica ‘Dickson’s Gold’. 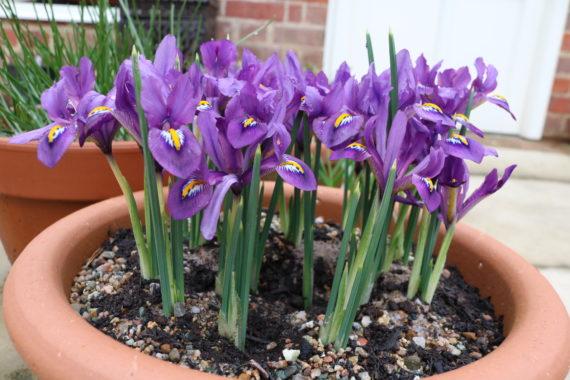 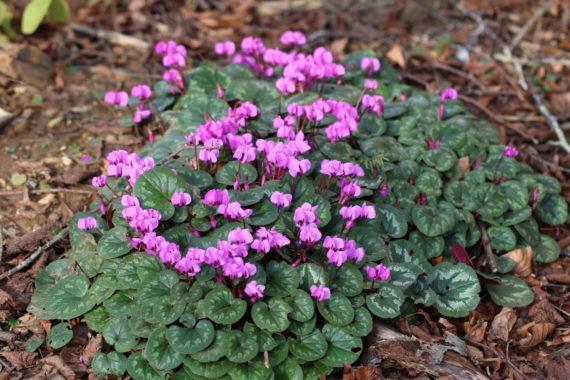 Many bulbs and corms are suitable for alpine gardens and grow well at the edge of borders or in rock gardens.  Most also do well in pots.   For the last two years I have grown some in terracotta pans for a spring display.  Their ability to grow in pots makes them great for a table-top display on a balcony or in a courtyard garden.  They can flower year after year if repotted but I like to plant mine out in the garden once flowered and refresh my pots each year.  In the garden they provide much needed colour in early spring.

Bulbs and tubers of these are available by mail-order from specialist suppliers, or from garden centres in the autumn. 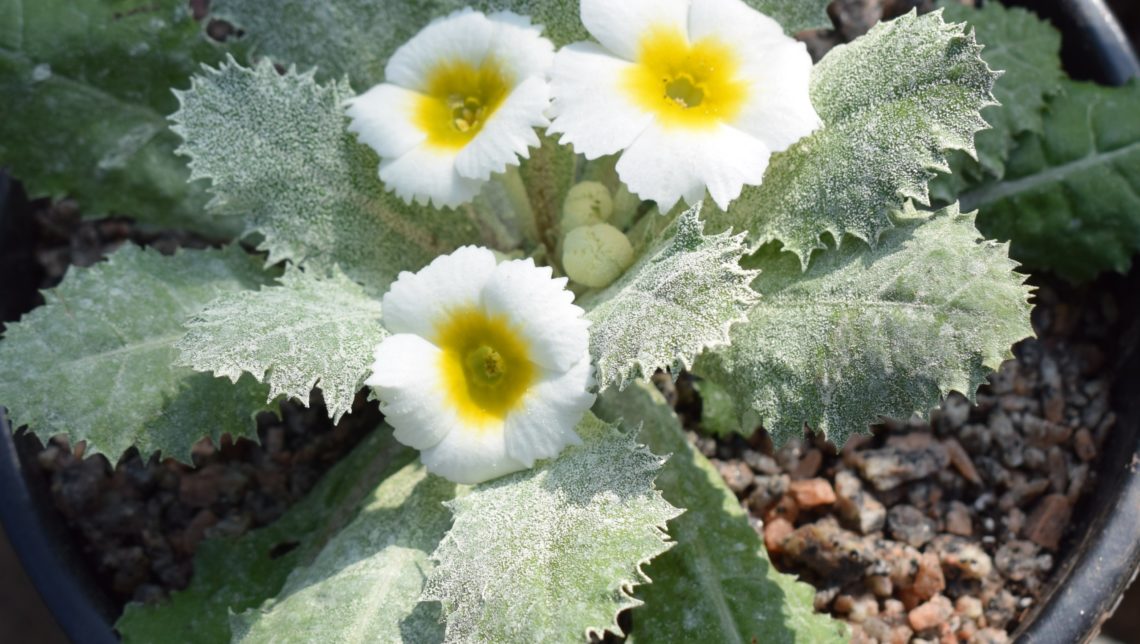 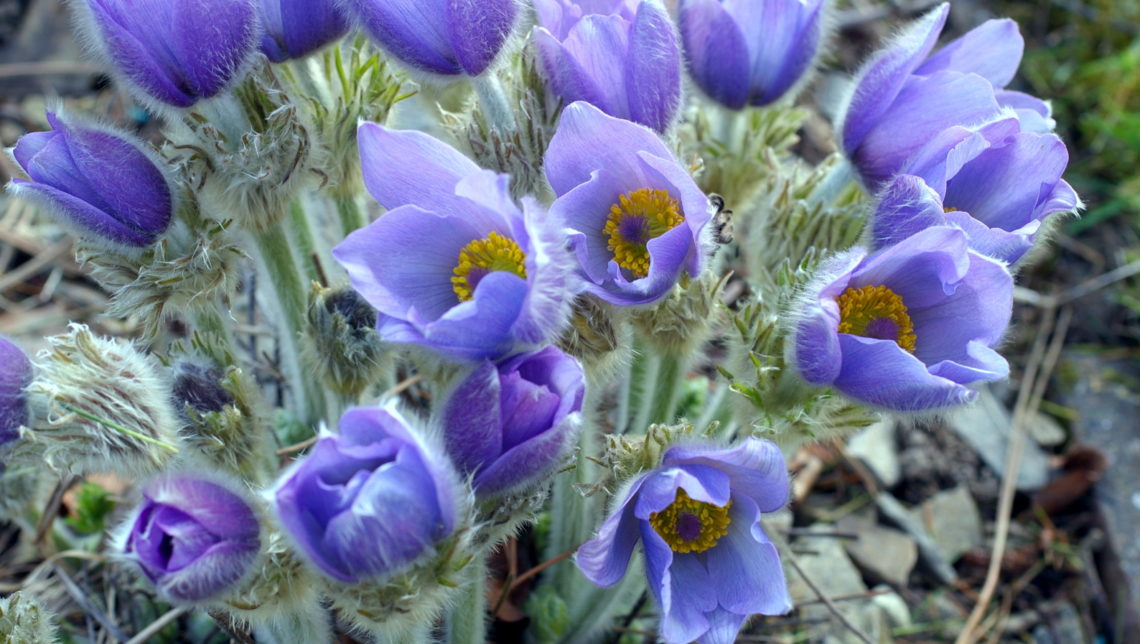 North Wales Diary
Pasque Flower Gems for the Alpine Garden
Take a trip through marvellous pasque flower gems that make beautiful additions to the alpine garden with our diarist John Good...
7 May 2020 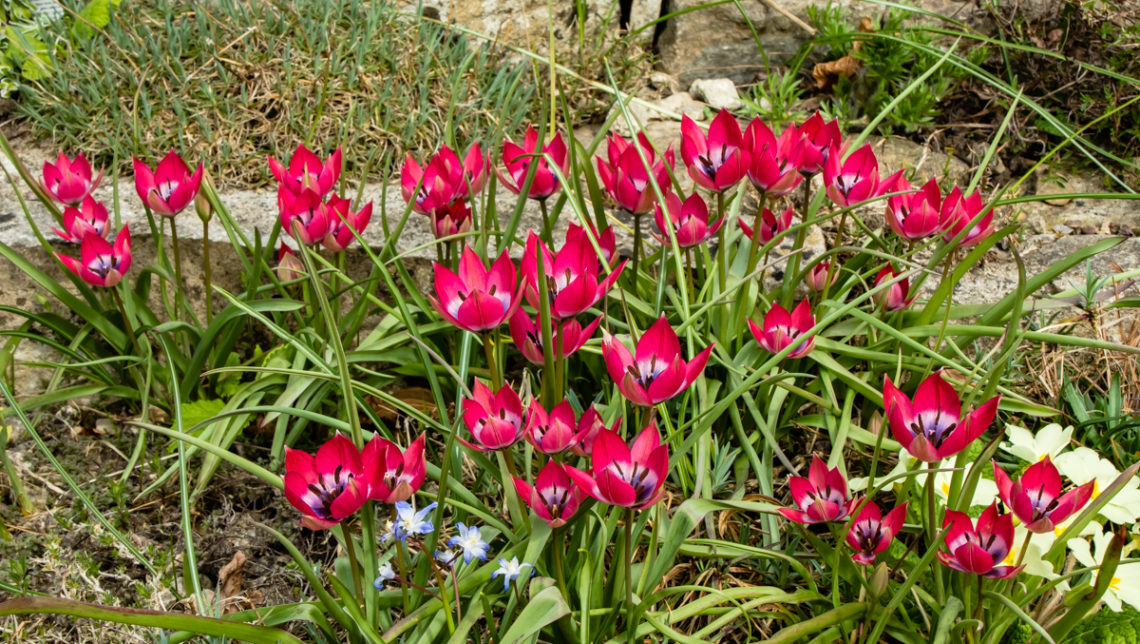 Photographer's Diary
The Photographer’s Garden
Take a peek inside the photographer's garden and see what's in flower this month - tulips, pasque flowers, Dianthus, rhododendrons, even a flowering cactus!...
11 May 2020