Aciphylla (‘Spaniards’) is a genus in the Apiaceae (Umbelliferae as was) which is mostly confined to New Zealand (there are two species in the mountains of southern Australia).

They are extraordinary plants, rarely pretty in the conventional sense but unusual, striking, even bizarre in appearence and with a character which stands out in the garden and makes a real impact. Unusually for any plant, a few species are genuinely dangerous and can cause serious damage if tripped upon in the wild and should be banned from the garden.

When I started to garden in the 1970s and 1980s, Aciphylla seed was regularly imported from wild populations, so that species were regular within specialist gardens and on the showbench. Some botanic gardens, notably Edinburgh, built up representative collections. Since then, garden populations have dwindled almost to the point of extinction, plants are almost never exhibited and plants are rarely, if ever, offered in the trade.

Aciphyllas are nearly all dioecious (separate males and females), so that seed is only set when both sexes are present (and from a garden point of view, males are usually the more attractive!). Also, they have no means of vegetative reproduction and, as far as I know, they cannot be propagated except by seed. Few gardens carried populations so that seed was rarely set in cultivation and as sources of wild seed from New Zealand dried up, plants in cutlivation died of old age and were not replaced. It does not help that species tend to be tap-rooted, so that attempts to transplant established specimens usually failed.

Thus, when this year’s seed lists arrived, I was delighted to discover that both the Scottish Rock Garden Club list and our own seed list featured a number of Aciphylla amongst the wild-collected seed. I doubt if the managers of both the seed distributions concerned will thank me for highlighting this happy occurrence but then, most of the requests will be well embedded by the time this is published.

In recognition of this splendid donation, I thought I would present a short celebration of the genus, in the wild and in cultivation. As so many of the pictures involved were from the PDA (‘pre-digital age’), I slipped down to our local photo shop yesterday to have a number of old transparancies specially scanned.

Some aciphyllas are massive plants, particularly in flower. Some of these have leaves so sharp and rigid that they have the ability to run right through flesh if fallen upon, and it is reported that walkers have perished after falling on plants when they have lost their footing on a mountain slope. Perhaps the largest of all is A. scott-thomsonii, which I have grown in the distant past, but seem not to have taken a picture of. A. lomondii is, I think, a relative, which is very localised in the wild and was only described fairly recently, so it does not feature in my main source, Mark & Adams (1973 but still in print). I grew this by the front door, until it (and its relative) were understandably banned by my wife. 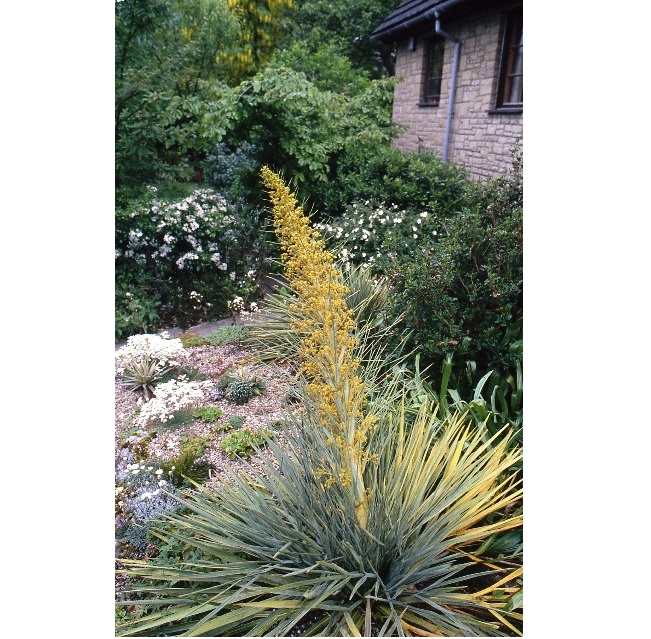 Perhaps the most widespread and familiar of the giant species is A. aurea, which is common in Chionochloa grassland through much of the South Island. It was quite often seen in cultivation and was potentially less lethal than some, but I never grew it. Here is a picture of a male plant in flower on the Old Man in Otago. 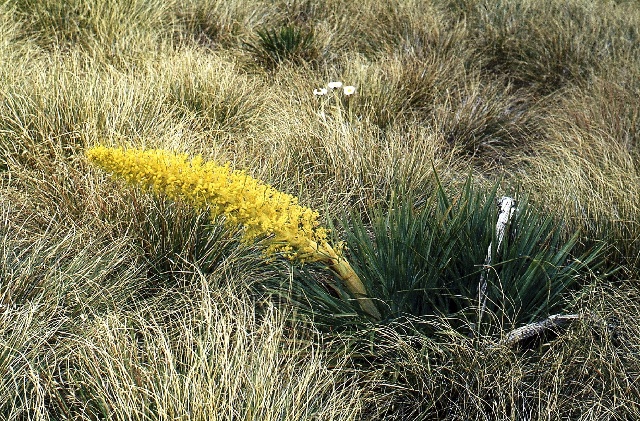 A. colensoi is another large species, morphologically roughly intermediate between A. scott-thomsonii and A. aurea, and also quite widespread, also occurring on North Island. Here are lethal-looking rosettes growing on Mt. St. Patrick in the NE of South Island. 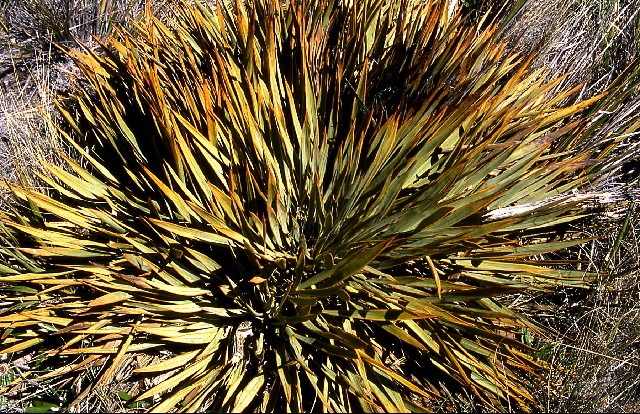 The next group are also big plants with huge inflorescences but the leaves are less solid, so they couldn’t run you through – although they could certainly still poke one’s eye out! For years I grew a large A. glaucescens next to the pond where it only appears in distant photos from the time. It is an attractive species with bluish leaves, but weeding anywhere near it was a painful trial and I was always careful to wear my glasses. In the end it regretfully went, hacked down while wearing a pair of heavy gauntlets.

Less attractive, but still making a real statement, was the curious A. squarrosa. My memory is that this died having flowered. Unfortunately, it was the less-showy female. 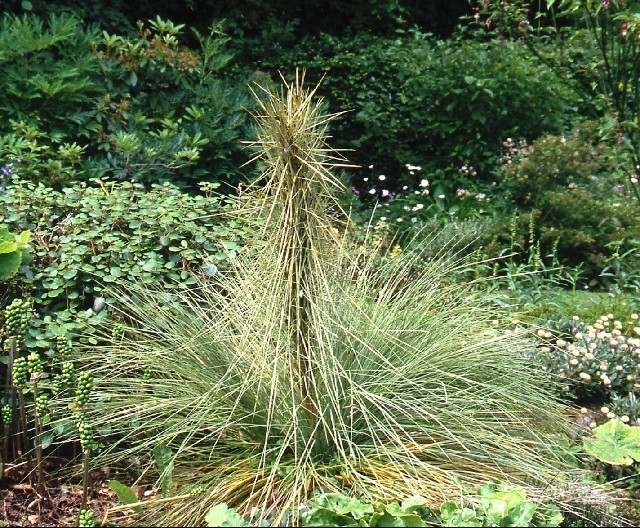 While I was at Edrom Nursery, in the Scottish borders many years ago, I photographed this male A. squarrosa. 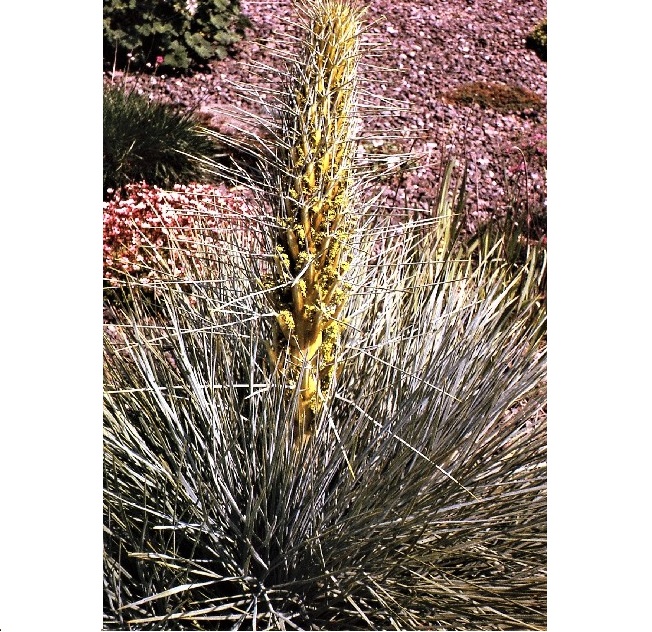 The next photo comes from my previous garden, back in 1985, where I grew A. subflabellata. It’s quite like A. squarrosa but a smaller and somewhat neater plant. Another female unfortunately. The Celmisia in the background is the much-lamented C. semicordata ‘Secretary Island form’. This was distinct and easy of cultivation, but I have not grown it for many years. I must ask Alan Furness if he still has it. 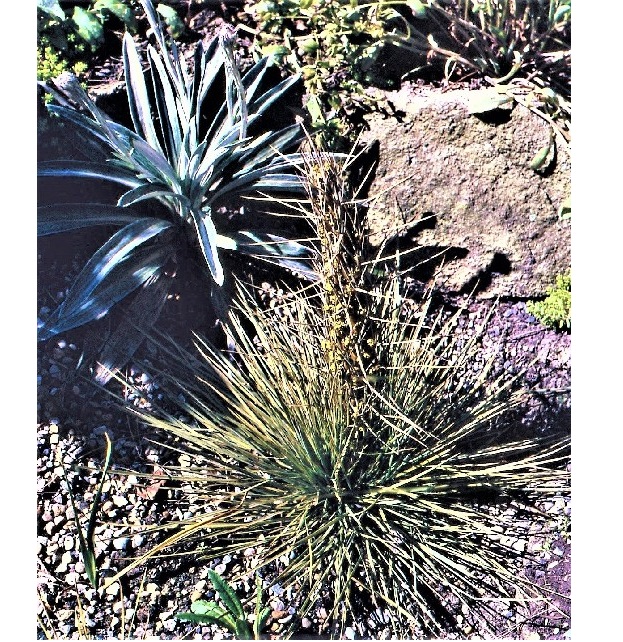 We now move on to species much more suited to the alpine garden, and hardy alpine species to boot. I am starting with the unique A. pinnatifida, a species from Southland, where I was fortunate to see it growing on Mt. Burns. Most plants from this very wet region do not thrive in our gardens but A. pinnatifida flourished for two or three decades, frequently appearing in foliage classes at AGS shows.

It has reappeared briefly more recently and it may have become established in cultivation again. It is not to everyone’s taste, but it is certainly unmistakeable! This photograph was taken at the now-defunct Newcastle Botanic Garden 30 years ago. 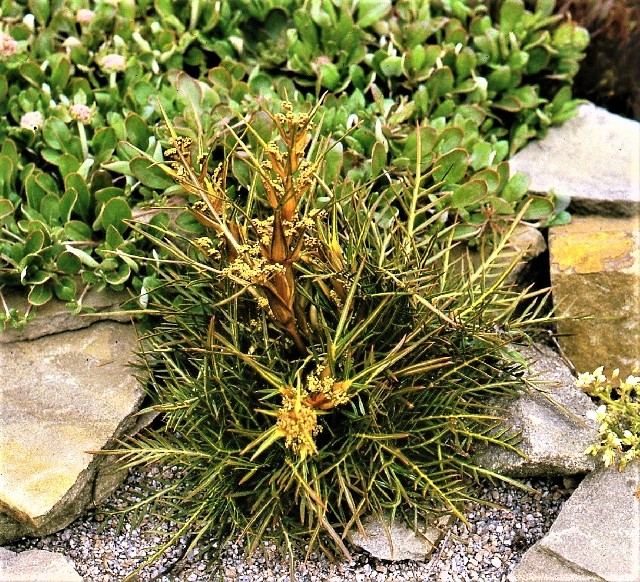 Here is A. pinnatifida on Mt. Burns, and the helicopter which took us up the mountain. 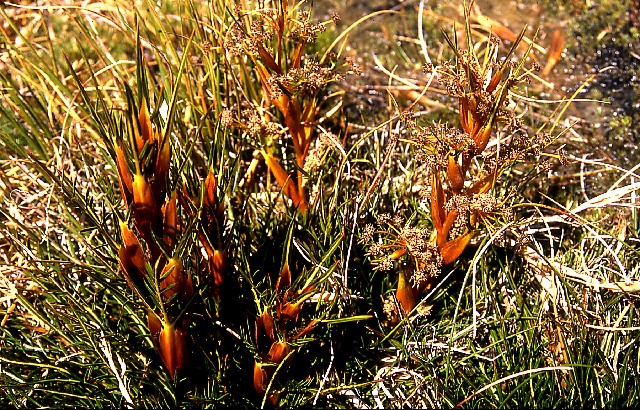 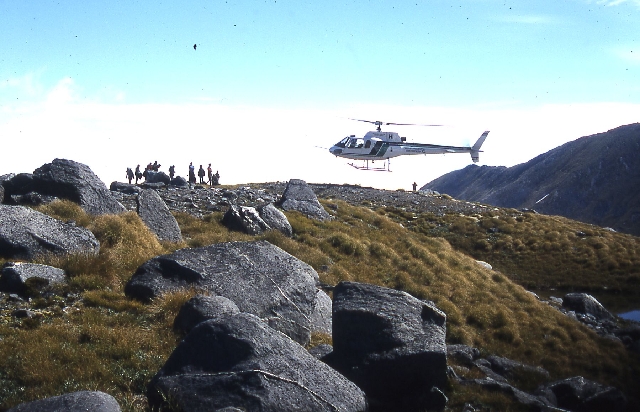 Aciphylla kirkii is another ‘medium-sized spiky’. This is a high-level endemic from the Otago ‘whalebacks’. This photos is from the Remarkables. 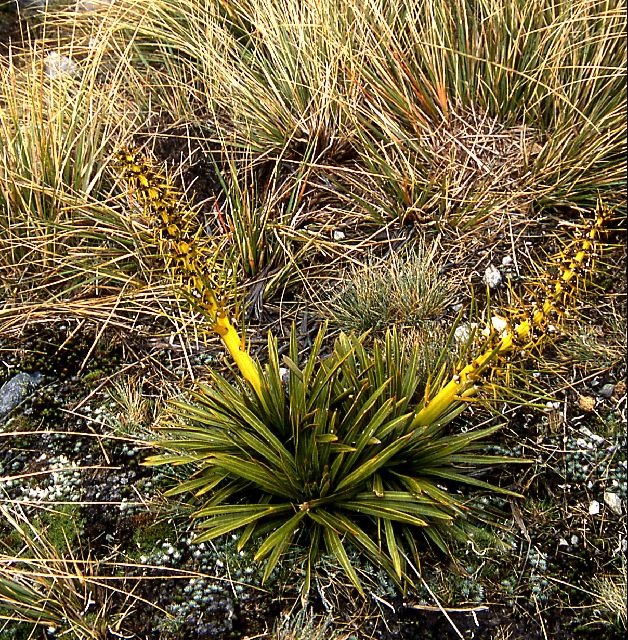 A. kirkii has only three divisions per leaf, and the leaves are rigid. In A. hectori, which I have grown, there are three divisions but they are less rigid. There follows a group of species which form bushy green mounds with more than three divisions per leaf. Most have attractive yellowish inflorescences in the male, but the females are dowdier and brownish. In both, the foliage is the main attraction. Perhaps the easiest is A. monroi (frequently misspelt), which survives with me today. 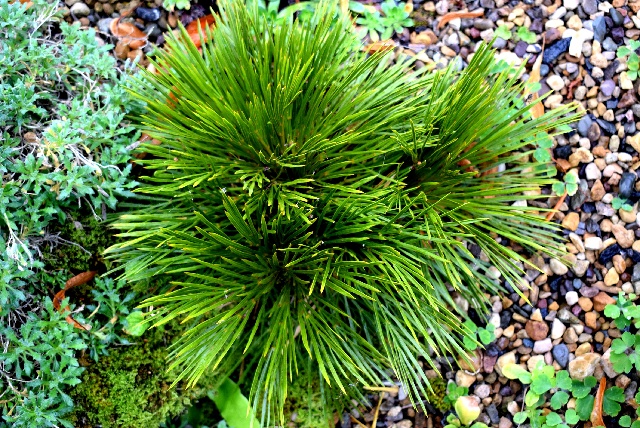 Aciphylla montana and A. lecomtei are close relatives of A. monroi but tend to have more pairs of leaf-divisions (these overlap in number) and differ in the form of the inflorescence. Also sometimes grown was A. similis with six pairs of leaflets. Here is A. montana, growing on Mt. Hutt, Canterbury. 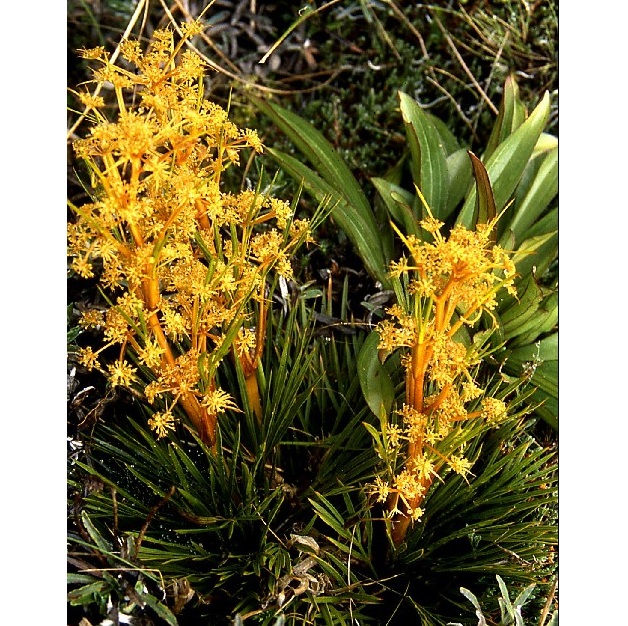 And A. lecomtei, photographed at the RBG Edinburgh in 1984. Jim LeComte, a nurseryman with whom I stayed in 1979, first spotted that this was a new species, which was subsequently named for him, and sent seed to Edinburgh after he visited in 1981. 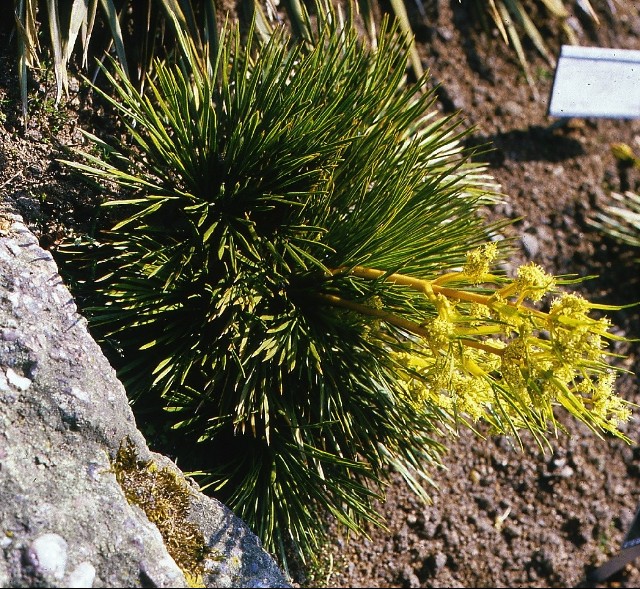 The next group still have recognisable ‘umbellifer’ heads of flowers, and thus are thought to be the most primitive (ancestral) of the Aciphylla species. A. divisa is a fairly widespread species in the southern half of South Island. Here it is photographed at RBG Edinburgh again. 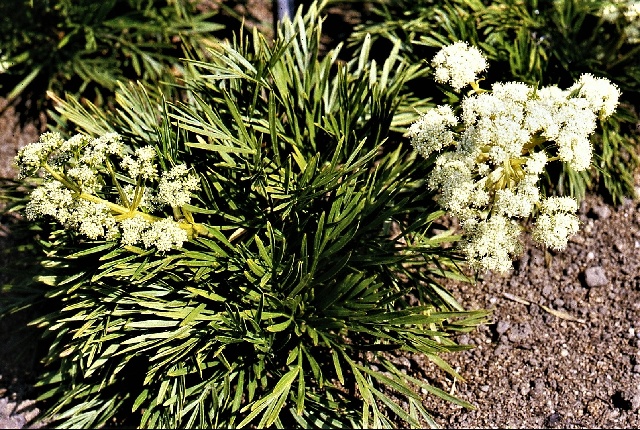 In A. congesta and A. crosby-smithii, summit-top plants from the southern whalebacks, congested rosettes combined to form very attractive cushions. Sadly, neither of these species have proved very amenable to cultivation. Nevertheless, the following photo of A. congesta was taken at Edinburgh in 1980. 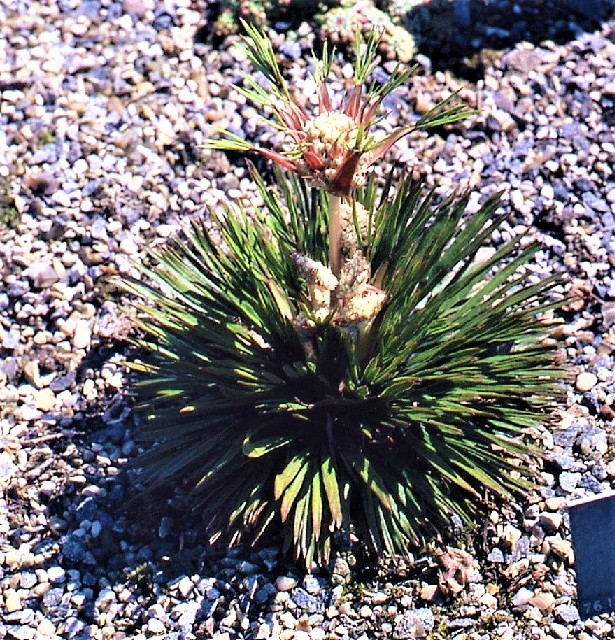 When we visited Mt. Burns in 2003, we were fortunate to see great cushions and mats of the spectacular A. crosby-smithii in the summit area. It has attractive glaucous leaves with purple bases. 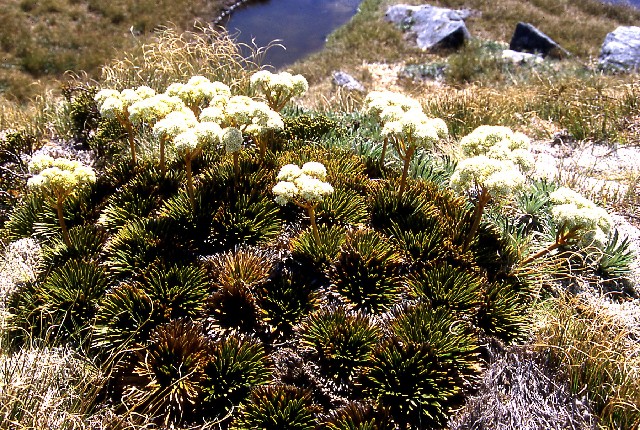 Of all this summit-top group with white flowers, A. spedenii from the Eyre Mountains, is the tightest. Surprisingly, a single rosette has stayed with me for more than a decade, wedged into a crevice. 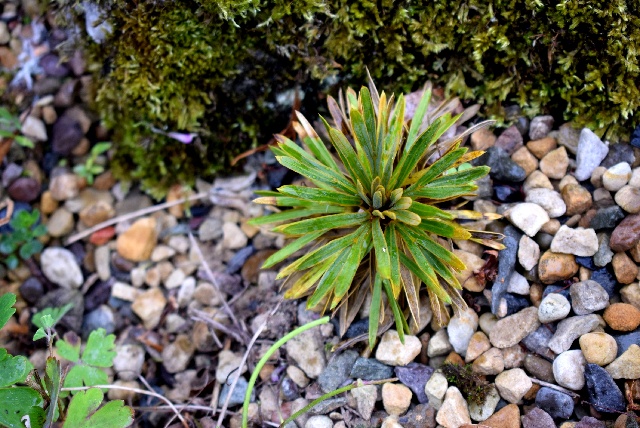 Finally, we come to the most glorious of the alpine Aciphylla species: A. simplex, which crowns the rocks of some of the Otago whalebacks. Seeing this on the Old Man back in 1979 was one of my most memorable alpine moments. There is a second related species A. dobsonii which I have not seen. 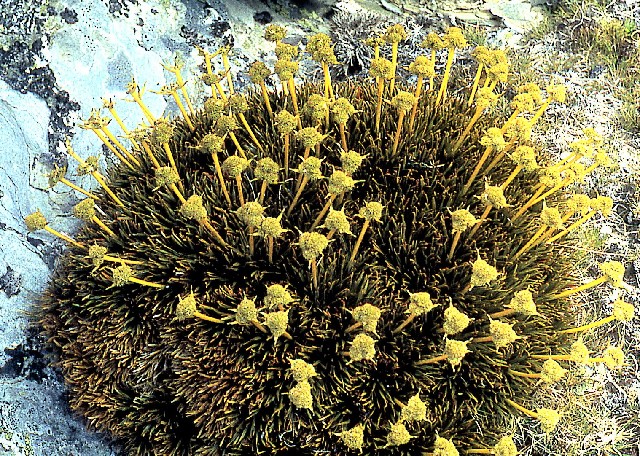 Here, finally, is a young rosette of A. simplex at RBG Edinburgh. Enjoy trying to grow aciphyllas! 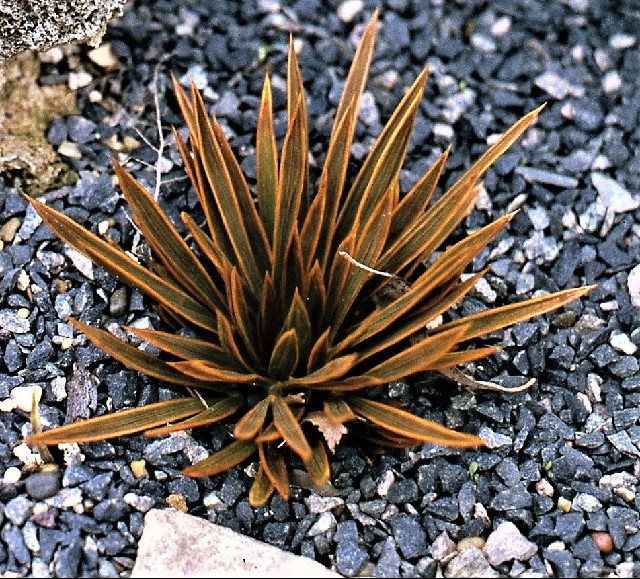 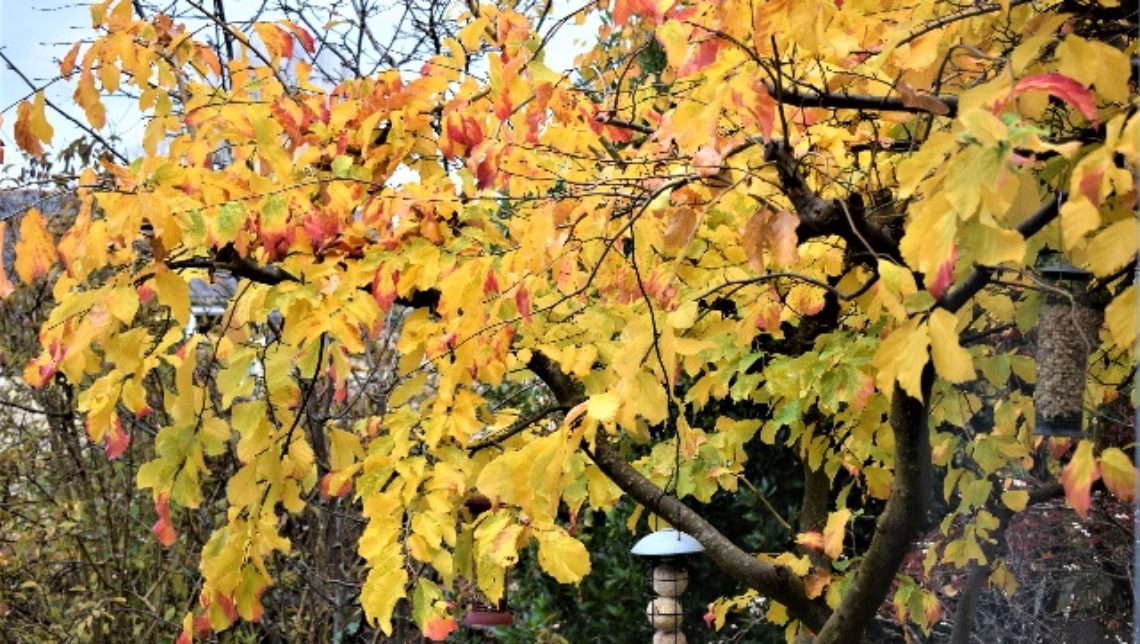 Northumberland Diary
In the deep November…
John shares the challenges of gardening in the North East as the temperature starts to drop....
25 November 2019 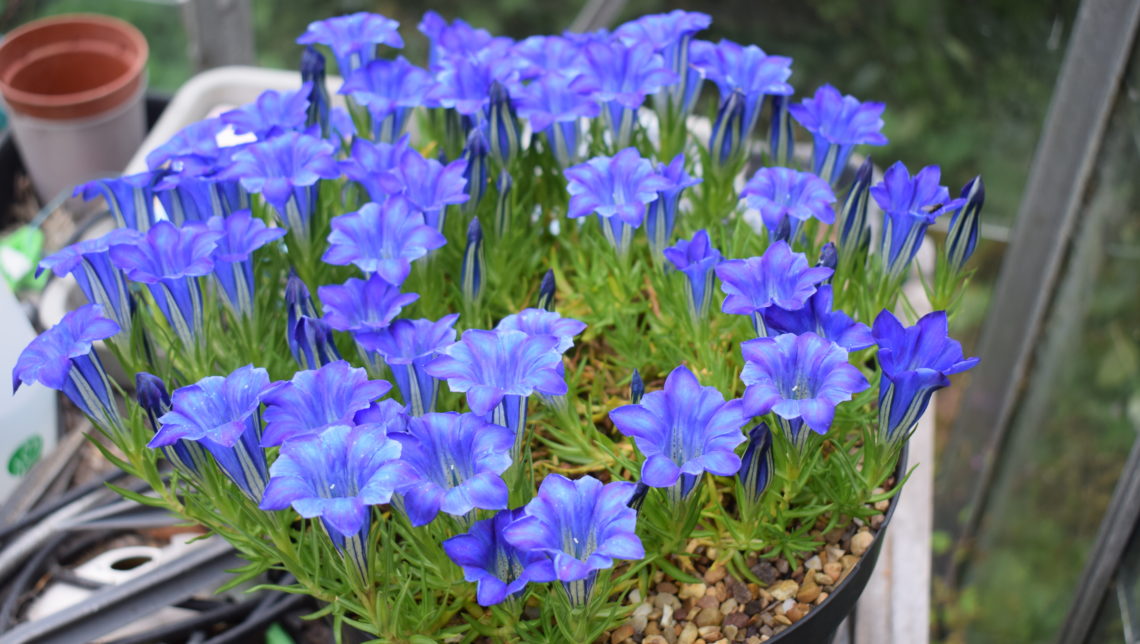 Northumberland Diary
Galloway gardens
Our diarist has been visiting some gardens around Galloway and preparing his plants for the autumn shows....
11 October 2019 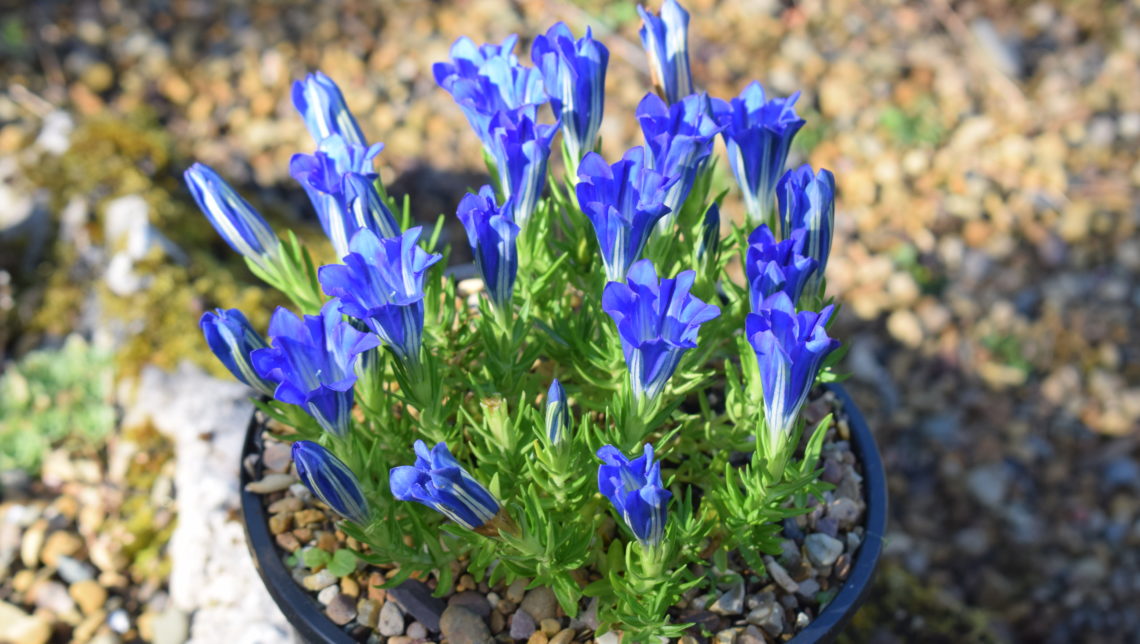