We grow snowdrops not only for their effect in the garden of course but because they can be multiplied for the nursery and made available to other gardeners by exchange and at snowdrop sales and shows such as those the AGS hold.

So first they have to be carefully recorded and cultivated as any other plants in the garden, as a resource from which to propagate, and second (in the way described for The Snowdrop Company in The Galanthophiles) displayed to gardeners. We do this locally by opening the garden for the National Garden Scheme (NGS) and by involvement with the Best of Faversham Market within the town, and by links to other nursery-people such as the Plant Fairs Roadshow, which now holds a regular ‘Snowdrop Day’ as a progression from the ‘Snowdrop & Hellebore Extravaganza’ held for many years by the Kent Hardy Plant Society. This year, the Plant Fairs Roadshow event is on Sunday 10 February and our garden at Copton Ash is open on the 10 and 17 February. Any readers in Kent may be interested in this guide to places to see snowdrops in the county. 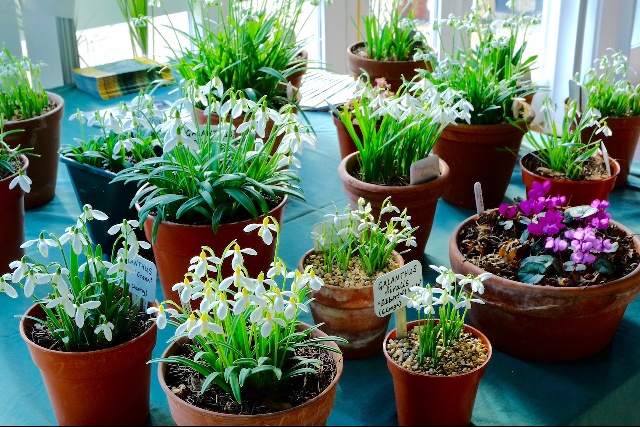 Snowdrops consolidate those local connections between gardeners and nursery-people in the south-east where we live. David Way, who wrote such a valuable article about his experiences growing snowdrops in the recent issue of the AGS journal, was a friend who gave us various snowdrops including Galanthus plicatus ‘Percy Picton’ distinct for its long flower pedicels and quite free-seeding habit, and his own selection of G. elwesii from the village where he lived, ‘Hunton Giant’. 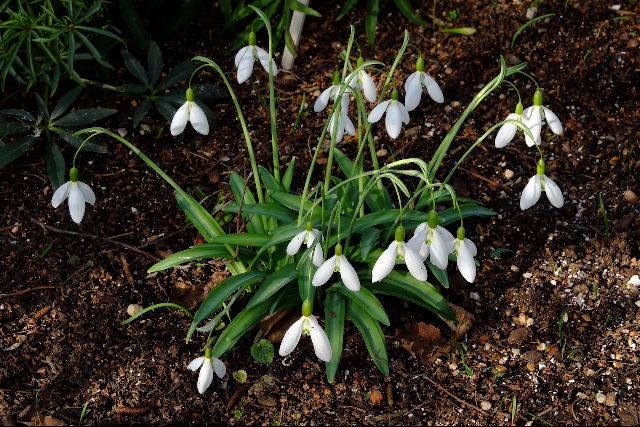 Our interest began when Rosemary Powis, who was secretary of the East Kent AGS for many years, gave us bulbs of ‘S. Arnott’, ‘Viridapice’ and ‘Pusey Green Tip’, and from that point on the enthusiasm has grown as it must do in similar ways for many other gardeners.

Elizabeth Strangman and Graham Gough when at Washfield Nursery added more, along with the marvellous and special range of woodland plants they grew as well. These plants have strongly influenced how our garden has developed. Richard Bird, who played an important role for the AGS towards the end of Roy Elliott’s editorship, also regularly had snowdrop days and gave us other cultivars such as ‘Ginn’s Imperati’ (which has connections again with a past plantsman and member of the AGS). Many of Julia’s snowdrops also came from Richard showing that close interconnectivity of gardens and gardeners. Galanthus elwesii ‘Roger’s Rough’ is named for his garden at Kilndown on the Kent/Sussex border. 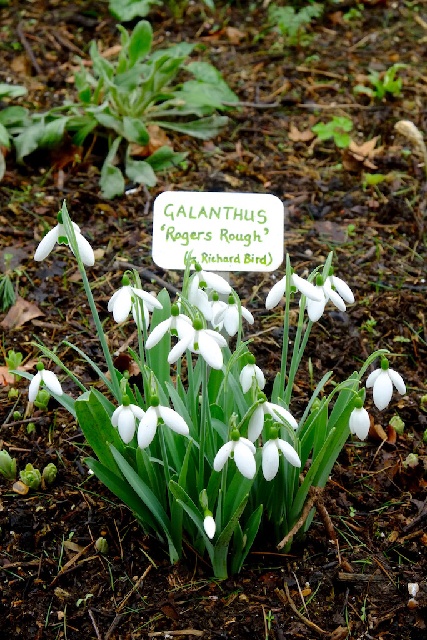 From Eric Jarrett, who once ran the Kent AGS Show and lived at Longfield, we have G. elwesii ‘Gravesend Giant’ which he picked up as discarded bulbs in a local park, and from his own garden now in Gloucestershire, ‘Kooshti Bok’ which translates as ‘Good Luck’. 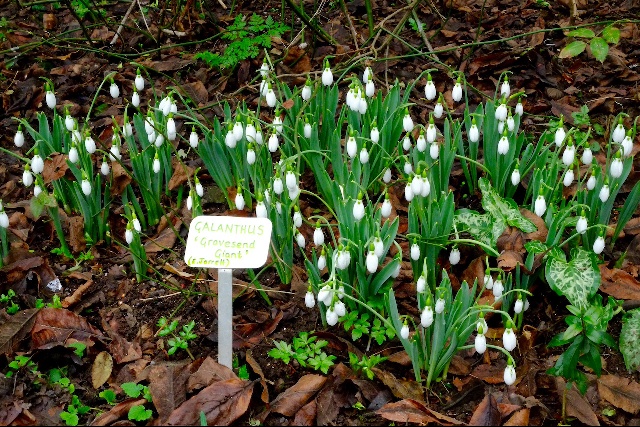 Graham Gough grew many of the snowdrops sold at Washfield and has continued the same tradition now at Marchants, his wonderful nursery and garden near to the village of Laughton in East Sussex. We have some distinctive plants that have come from there and from his friendship with Dr. Ronald Mackenzie. These include a fine and strong growing form of G. elwesii pictured in the foreground below, the free-seeding G. plicatus ‘Gerard Parker’ (Group), and the diminutive G. nivalis ‘Sibbertoft White’, a tiny and delightful poculiform. 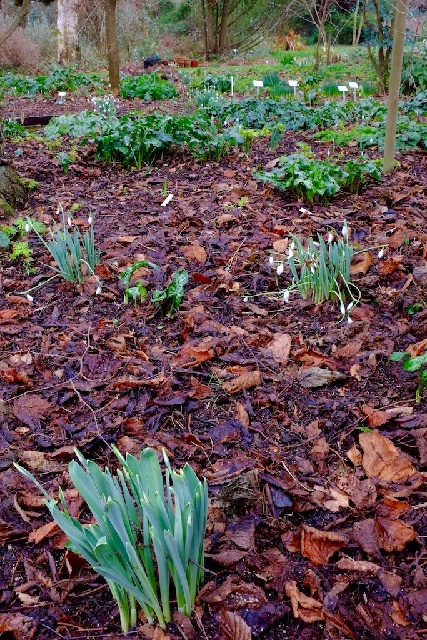 In his latest list, Graham includes a snowdrop from Jane Streatfeild, who for many years has run the Kent NGS, making yet another connection across south-east gardeners. Graham’s is a very personal list and this really is how snowdrops evolve in individual gardens: they can be catalogued and described as so valuably presented in the Monograph of Cultivated Galanthus by Matt Bishop, Aaron Davis and John Grimshaw, but this book also shows how they are intimately connected to individual gardens and gardeners.

Different cultivars thrive in different gardens and some, such as ‘S. Arnott’ and ‘Straffan’, have a vigour and persistance that is remarkable. Not so many of the forms grown now will be around in another hundred years but gardening with them hints at those that may well be, either because they are especially distinct and cosseted or because they are reliable and good doers that naturalise and are resistant to insect and fungal attack and, going forward, climate change. The trials held by the RHS and awards given to plants by (for example) the Joint Rock Garden Committee aim at defining especially significant and reliable plants, including snowdrops. But this also arises from nursery-people such as Elizabeth Strangman and Graham Gough, and gardeners in general, who have a really perceptive eye for good plants and grow and disseminate them. Galanthus ‘Washfield Colesbourne’ is a good example, here in Elizabeth Cairns’ garden at Knowle Hill Farm, Ulcombe, south of Maidstone. 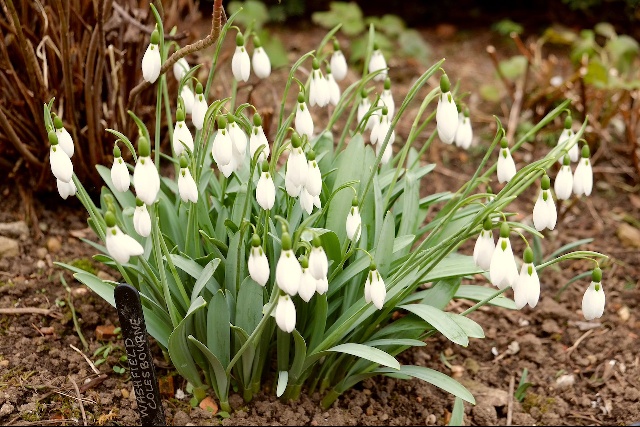 The original ‘Colesborne’ is a “feeble elderly beauty”, but as Steve Jones puts it in No Need for Geniuses: “in fact that is a reminder of the central truth of inheritance: that sex purges lineages of errors and that without it decay is inevitable”. This seedling from it clearly has more vigour and retains that beauty. Yet many snowdrops such as ‘S. Arnott’ and ‘Straffan’ are vegetative and sterile to a greater or lesser extent and do persist for generations of gardeners in the same way that many woodland plants are clonal and spread slowly in long-managed woodlands, so the story is not so simple in the shorter term of either our gardens or the longer term of ancient woodlands.

Gardening can be a part of unravelling and understanding this. Elizabeth Cairns has long grown strong colonies of G. elwesii that came originally as bulbs from her student friend and colleague Martyn Rix. Unlikely ever to win awards, but they are reliable garden plants bringing the story full circle back to the botanist and the way snowdrops make that very unique connection between the natural world and the garden. We have gained from the friendships and generosity of all those gardeners I have mentioned as the garden enters 2019, and add to that proliferation of snowdrops! 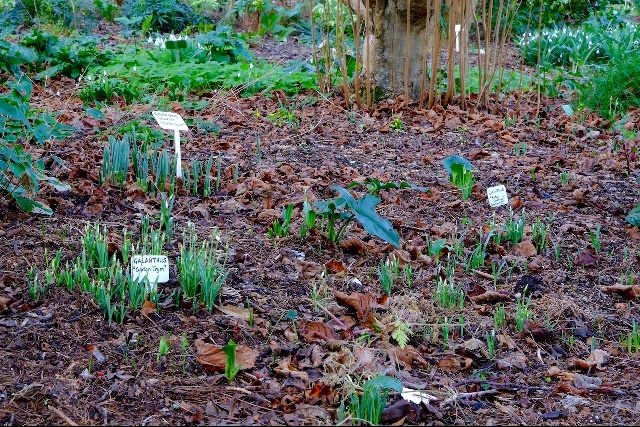 To finish though, I would especially like to acknowledge the very great generosity of Julia Jarman who gave us the snowdrops from her previous garden (and prompted this entry), which must have been hard to leave, and wish her well in her future gardening and vision. These are just three of the potfuls she gave us remembering other plantsmen and gardens: ‘Hobson’s Choice’, ‘Betram Anderson’ and ‘John Gray’. 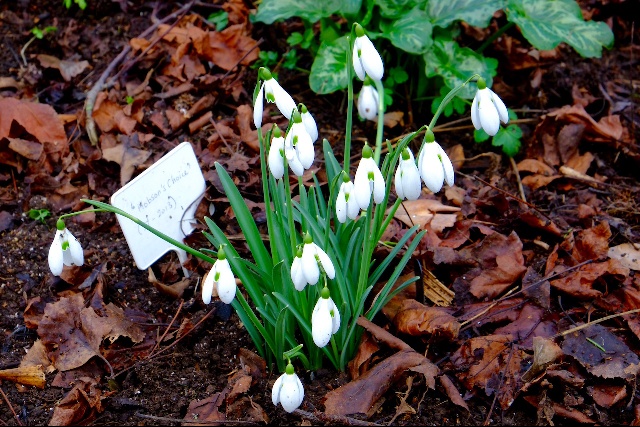 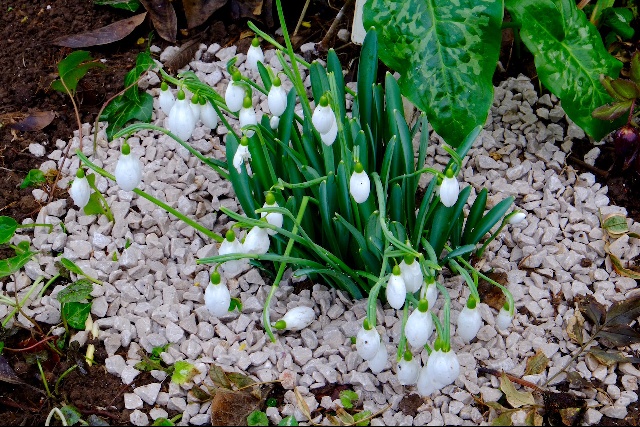 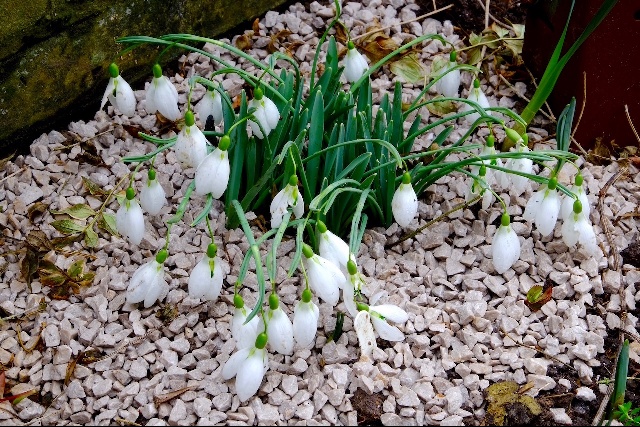 Kent Diary
A soliloquy on snowdrops
Tim Ingram shares the wonder of the popular winter flower in his Kent garden....
23 January 2019 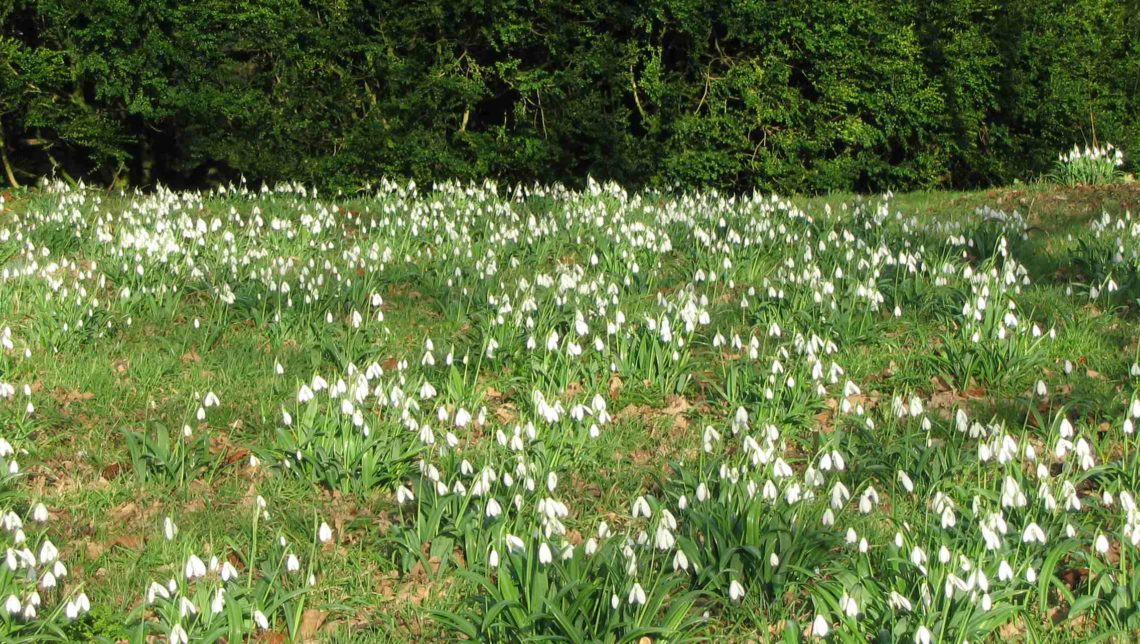