The April garden is so rich in plants flowering and change that it is hard to know where to start and how to describe the full excitement of the spring garden without writing a book rather than diary entry.

(Also it’s hard to find adequate time to sit down and write about it here as the grass and weeds really start growing and keeping up with the garden can take every hour of the day.) A good place to begin, though, is not actually in the garden itself but in the local woods as the woodland anemone lights up the scene. 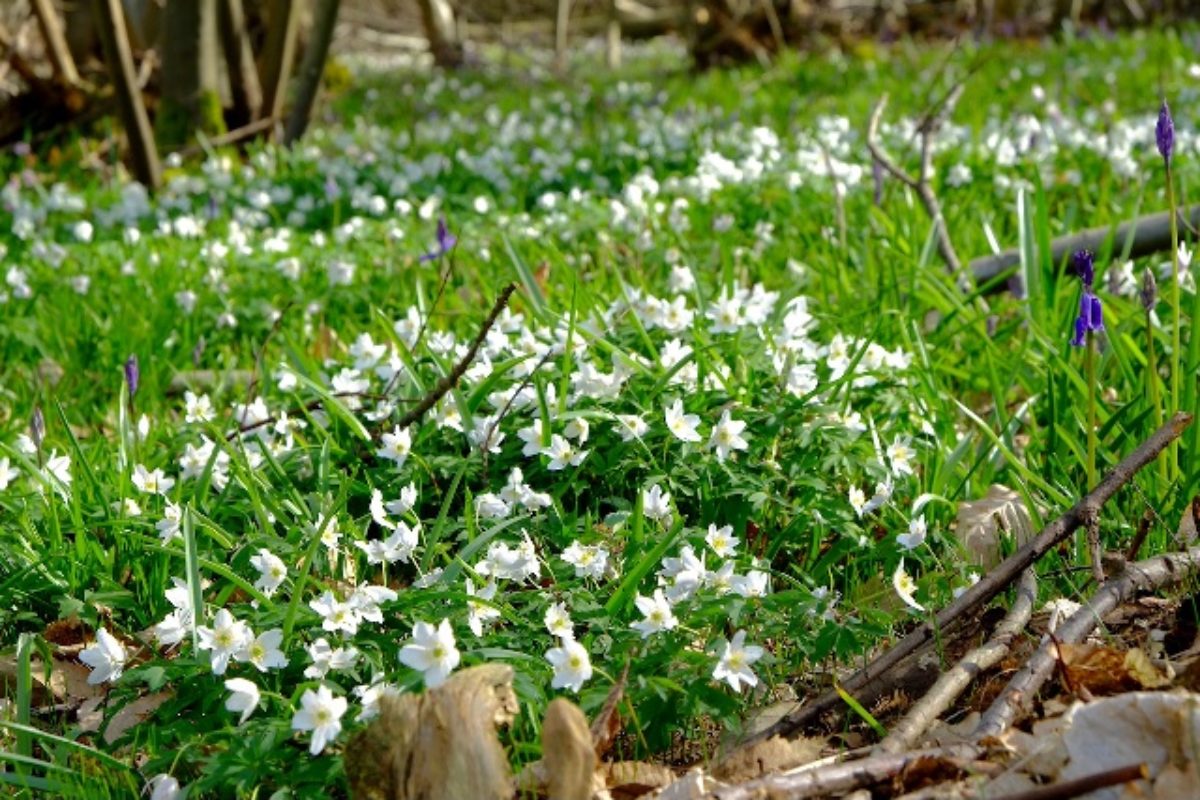 We are lucky in Kent in having significant long managed and ‘ancient’ woodlands rich in stands of Anemone nemorosa, and the way this spreads slowly and fills the understorey of woodland such as The Blean at Canterbury, and adapts to the long-term cycles of coppicing, relates similarly to the garden as it matures (even though the time scales may be very different). 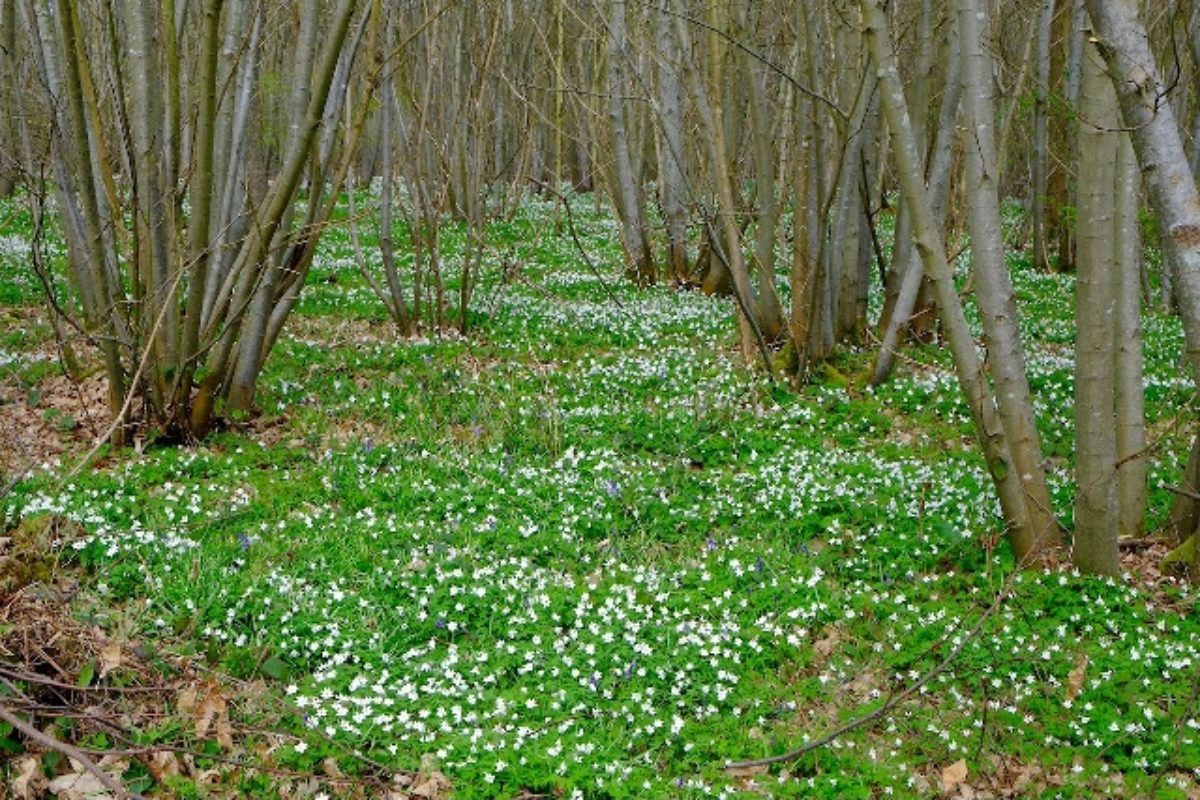 Generally A. nemorosa spreads vegetatively as multiple clones rather than sexually, only seeding very slowly into new locations, hence its classic description as an indicator of ‘ancient’/very long-managed woodlands. Various estimates of its spread indicate that it colonises vegetatively only at ca. 5cm or less a year (Journal of Ecology 0888\76\ 517Ð527).

The relative proportion of sexual to vegetative reproduction is only around 4.4% (Oecologia, vol.117, Issue 1-2, pp.105-7), though this can enable outlying clones to establish rather faster at up to 55cm a year given suitable habitat. This very interesting reference shows how new clonal colonies can develop in fresh situations  though it’s very unusual to find anemone growing as pictured here. In The Blean, so long associated with the important historic city of Canterbury, it carpets acres of woodland in the most spectacular way, often in combination with bluebells. 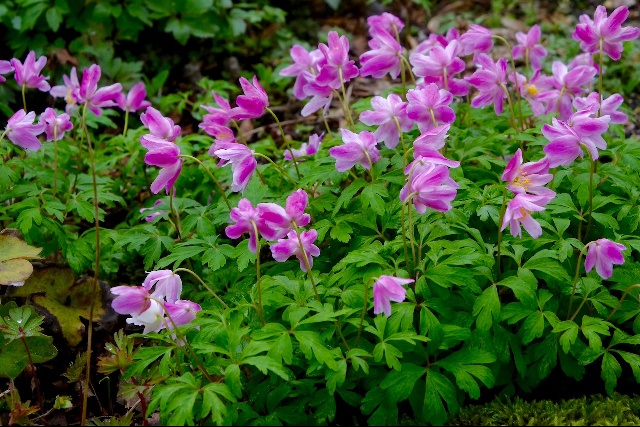 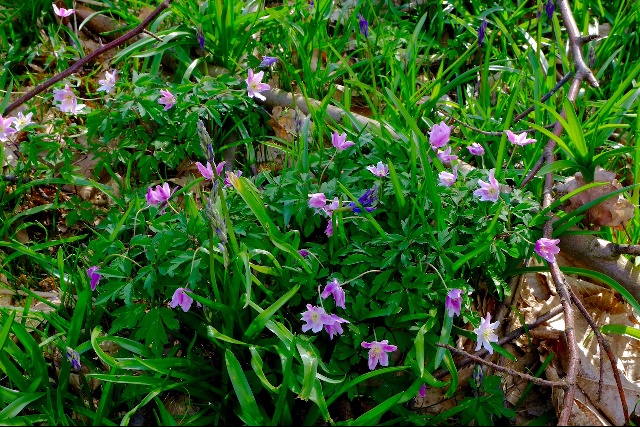 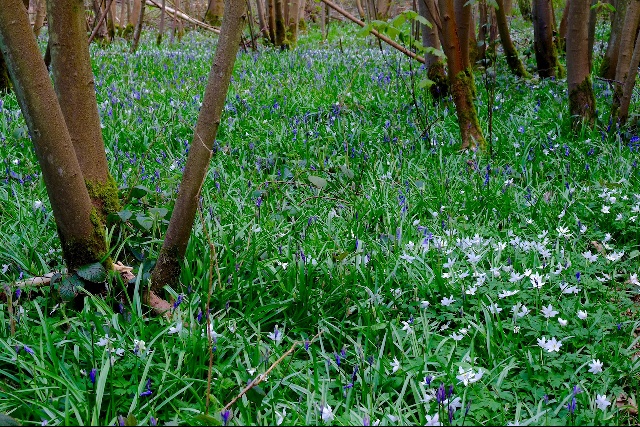 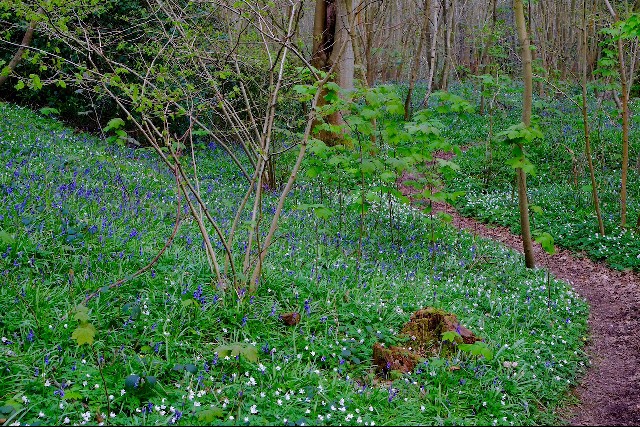 In Flora Britannica Richard Mabey mentions that a sky-blue form of wood anemone was a favourite of William Robinson. This is the well-known ‘Robinsoniana’, which was growing in Oxford Botanic Garden and probably originally derived from woods in Ireland.

Ruby Baker in the AGS Bulletin (Vol. 72, p. 348, 2004) mentions records of blue forms growing in Lismore Woods in County Waterford but they must be very rarely found and most blue forms have presumably arisen in cultivation. In an article in The Plantsman on Richard Nutt (New Series, Vol. 11, p. 130, 2012) she also mentions (and is pictured) the lovely pink ‘Evelyn Meadows’ that he named. It has large reddish-backed flowers and bronzy foliage, collected in N. Spain. Robin White at Blackthorn has been using this in crosses and the deliberate breeding between fine cultivars of A. nemorosa, and with A. ranunculoides, is a prospect for the future.

In European woods variation may be rather greater than in the UK. Ulrich Toubol says that ‘an average one square kilometre of beech woods in Denmark will usually contain from 20 to 40 clones with well-defined differences in shape, in colour, in size, of both flower and foliage’ (The Plantsman, Vol. 3, p. 167, 1981-2). Though it’s not clear if blue forms are included amongst these.

The Norwegian gardener Trond Hoy has recently shown this striking picture on Facebook (which I borrow), where he mentions similar clear clonal variation: here they grow very differently to the more typical coppiced woodland in the UK, under larger trees and grazed by cattle in summer, but the extent of their cover must imply a similar long history. 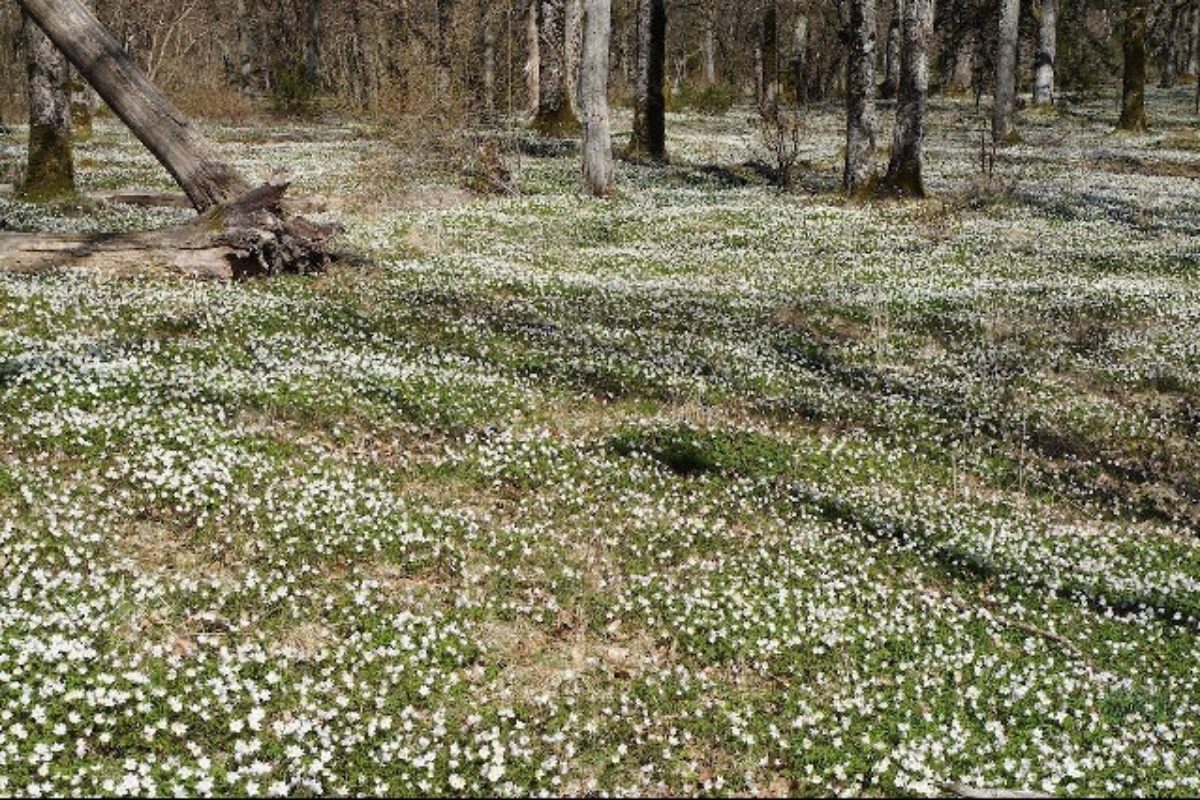 This long cultivated variation is what gives A. nemorosa such charm and delight, some of which is illustrated in this collection of flowers picked from our garden. 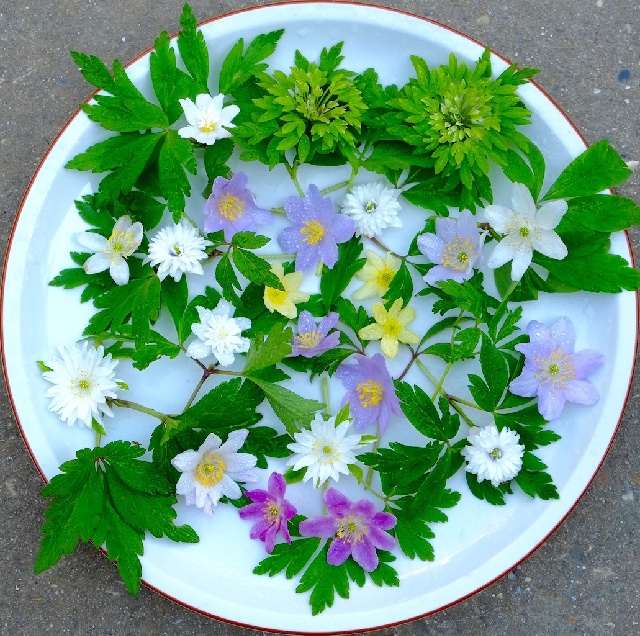 The Austrian nursery Sarastro-Stauden lists some 70 named selections, and in the UK the National Collection holders, Avondale Nursery, 77, most illustrated and providing a useful reference. Along with the yellow A. ranunculoides, which has a growing number of selections (many double forms) and the hybrid A. lipsiensis, these are a wonderful group of plants to collect and study and add to the woodland garden, and can also grow well in thin grass with bulbs, as Beth Chatto has done imaginatively in her famous garden at Colchester. This dark-leaved form is an example we found (not lifted I hasten to add!) growing in turf at Nymans Garden some years ago, and forms similar to this are in cultivation. 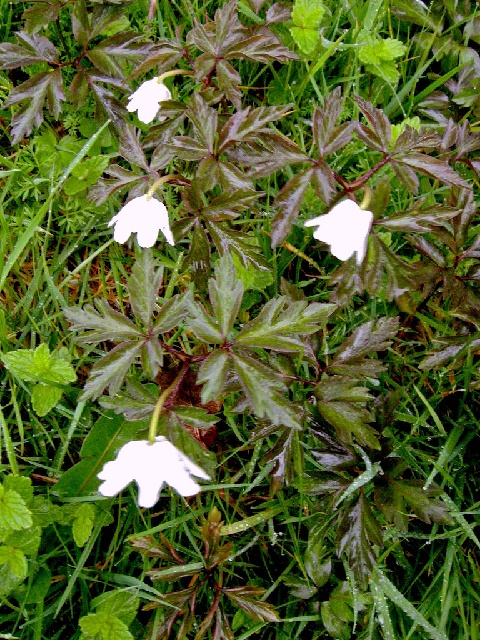 Here we grow them in various places under trees and with other woodlanders, probably most successfully in this picture between a large birch and old cherry where erythroniums, trilliums, cyclamen and other choice species mix with them to give that beautiful tapestry of foliage and flower after the snowdrops and hellebores earlier in winter. 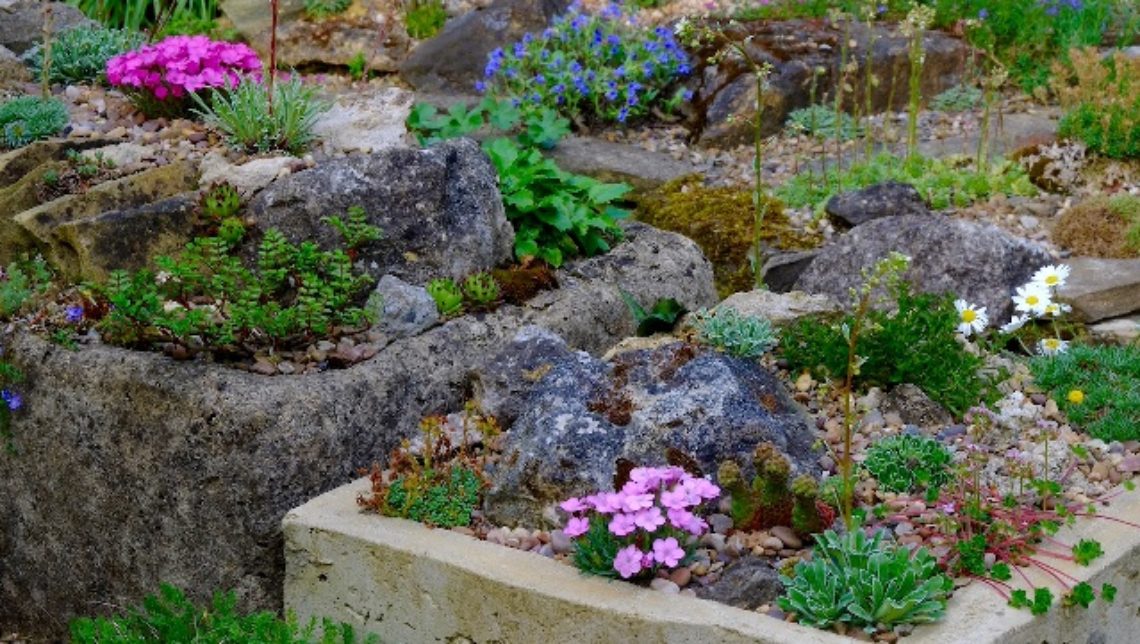