The dazzling display of early alpines from our skilful exhibitors blew the winter cobwebs away at the Pershore Early Flower Show 2020.

As the climate warms and flowers respond by bursting into precocious growth, our early shows become better and better. Indeed, some experienced competitors said they could do with more early opportunities to show off their plants. This time, the number of exhibitors and plants in the Open Section was up compared with last year, numbers of both in the Intermediate and Novice sections more or less unchanged. It is a pity there were not more entries in the Artistic classes, although there were some exquisite drawings and paintings on display, including the illustrated line drawing of Helleborus thibetanus by Gemma Hayes, who was also awarded the highest aggregate points in the Artistic Intermediate Section. 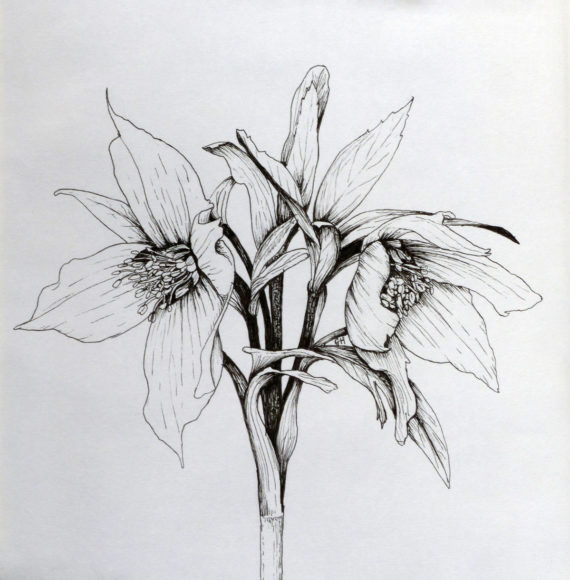 As would be expected, the overall display was dominated by bulbous plants, notably Crocus and Narcissus, with the former being particularly well represented on this occasion, including in the Novice and Intermediate classes. Also prominent was a quite astonishing range of dionysias, species as well as the seemingly ever increasing number of hybrids, many of them large cushions covered in flowers, indicating many years of selfless devotion to their demanding requirements, coming as they do from hot, dry habitats in (principally) Iran and Afghanistan. Overhead moisture is anathema to them at any time and watering, even in the very gritty composts they demand, must be done carefully, while any signs of rot among the rosettes that make up the cushion must be tackled instantly if rapid fungal spread and consequent death are to be avoided.  It is not surprising, therefore, that the plants on display were produced by only a handful of growers; we need more younger members to take up the challenge of producing similar quality plants for our delight in the future. Of the many I could have chosen, it is only right to choose one, Dionysia tapetodes ‘Kate’, shown by Paul and Gill Ranson in their small six-pan entry that won the E.B. Anderson Prize. They also took home the Mooney Cup for most aggregate points in the Open Section. 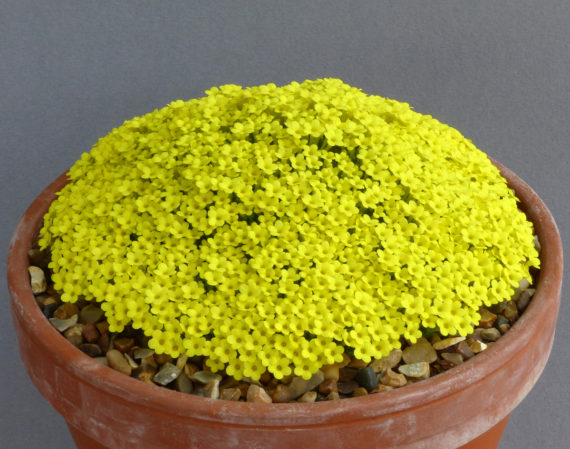 The well-deserved award for ‘best in show’ went to neither a bulb nor a Dionysia but a large and luxuriantly healthy plant of Ypsilandra thibetica, exhibited by AGS stalwart, Diane Clement. There was no hesitation when the judges adjudged it worthy of a Farrer Medal. This delectable, sweetly-scented member of the family Melanthiaceae, which includes the more familiar Trillium and Paris, grows in moist places which never dry out in summer, such as forests and shady slopes along valleys at 1,300-2,900 m in south and west China and Taiwan. Diane writes: ‘My plant lives permanently in a large plastic pot which is kept outside at all times, unprotected over the winter. The pot contains a mix of ericaceous compost, leaf-mould and perlite and I use a slow-release, ericaceous fertiliser in the autumn.  After a hard winter, the leaves can discolour and become nibbled, so I remove the damaged ones before the flowers emerge.’ 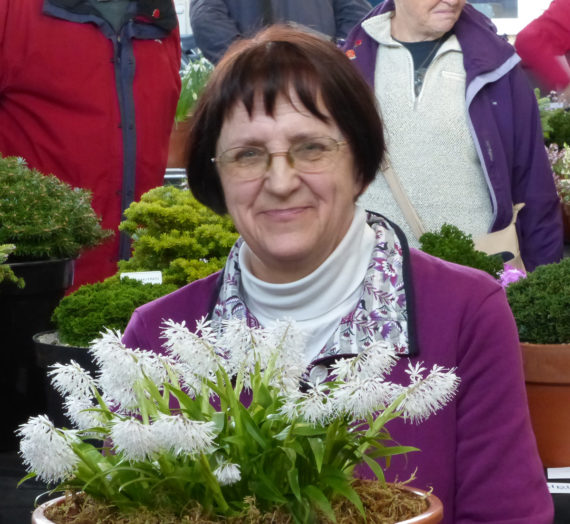 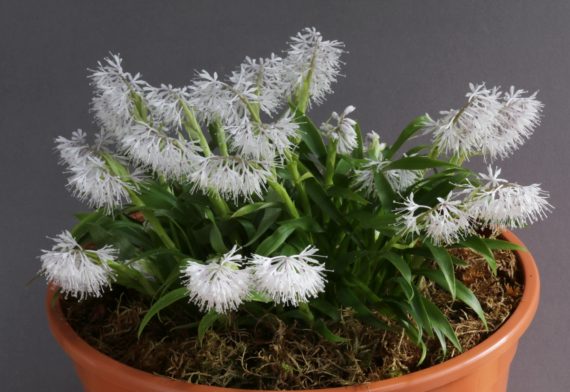 Before coming to the bulbs there are some other plants that, for one reason or another particularly drew my attention. Brian Burrow has been selecting and hybridising alpine primulas for many years and has produced some outstanding plants in the process. One of his latest offerings was an unnamed P. allionii selection that was awarded an Award of Merit (subject to providing a cultivar name) by the RHS Joint Rock Garden Plant Committee meeting later in the day. The judges liked its well-formed, very bright flowers over a very neat, compact cushion. 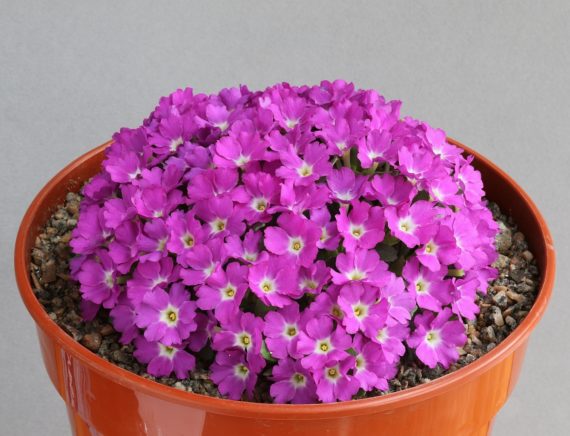 In contrast, P. x ‘Joan Hughes’ is an old hybrid between P. allionii and P. ‘Linda Pope’, the latter the result of an even older cross made between P. marginata and P. allionii by a Birmingham nurseryman, Mr Pope, before WW1, who named it after his daughter. ‘Joan Hughes’ is still one of the best of the many hybrids involving P. allionii and P. marginata, slowly building a compact cushion which always flowers with gay abandon. An outstanding example shown by Mark Childerhouse was awarded a Certificate of Merit. It is worth mentioning that when grown outside in damp environments, it is worth removing the congested heads of faded flowers to prevent fungal rot attacking the rosettes. Like all these primulas it is very easy to propagate as each rosette in the cushion is generally rooted down into the compost so that rooted pieces may easily be excised and then placed in a gritty compost to grow on. The only problem with this, as with all vegetative propagation, is the potential for virus diseases, carried over on the cuttings, so it is essential to check, as far as it is possible to do so by visual inspection, that the donor plant is ‘clean’, that is to say that there are no tell-tale signs of leaf or flower distortion or leaf mottling. Obviously, it is very important also that plants suspected of having virus infection are not exhibited as there is a risk of spread, especially if insect vectors such as aphids are present. 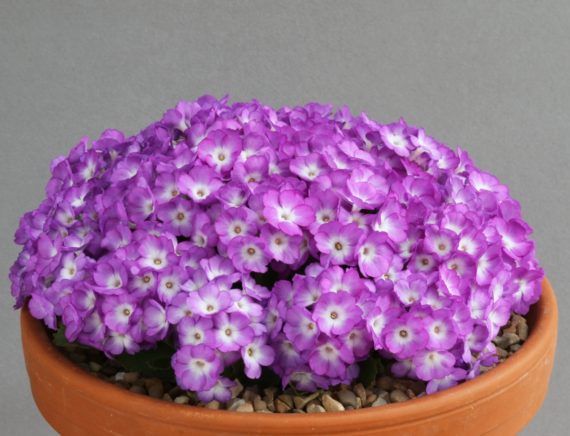 Hepaticas are becoming ever more popular, partly as a result of the influx of a host of selected cultivars from Japan, many of them eye-wateringly expensive to acquire, partly because they provide a wide range of colour in the late winter and early spring garden; many in addition have outstandingly attractive foliage.  This popularity is reflected on the show bench and we were treated to many good plants at Pershore. Pride of place went to a beetroot-coloured H. japonica ‘Tessin’ seedling shown by Bob Worsley, which was awarded a Certificate of Merit. These plants are not easy to split, although this may be achieved with caution in the case of a particularly desirable cultivar, but are straightforward from seed, provided it is sown fresh, but be prepared to wait for 2-3 years for the seedlings to reach flowering size. They do very well in the open garden, preferring a position in light shade in a woodland soil mix, top-dressed with leaf-mould from time to time. 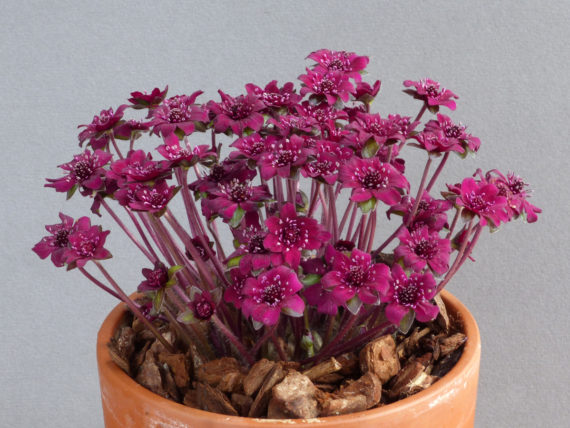 Pleiones are perhaps a little less popular than they were a few years ago, but given their ease of cultivation in a cold frame or unheated glasshouse, with only protection from frost required in winter (or the dormant pseudobulbs may be stored dry in paper bags or similar), they are well-worth considering. The pseudobulbs should be repotted each year as they start into grow, in a freely-drained orchid compost, the exact composition of which is not important, although an equal mix of coarse orchid bark, sphagnum moss and coarse perlite works well. Do not water until growth is underway, with signs of new roots, then you can hardly water too much until the foliage tips start to brown off in late spring to early summer. As the compost contains very little nutrients it is a good idea to add a complete liquid fertilizer at one-third the strength advised for ‘normal’ plants every second or third watering. A large pan of a compact cultivar, Pleione ‘Riah Shan’, shown by Steve Clements, was much admired by visitors and judges, receiving a Certificate of Merit. 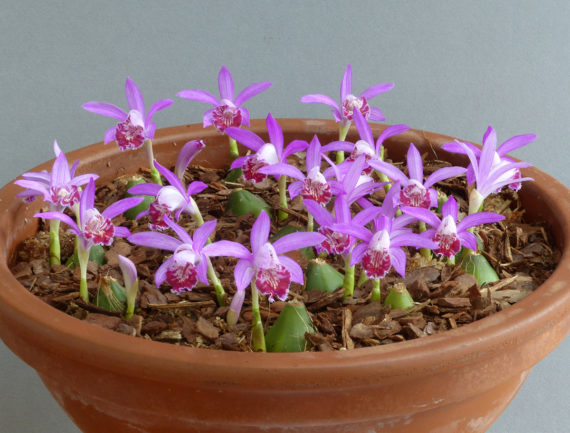 Moving on to the bulbs, the best plant in the 19cm diameter classes and winner of three trophies, including the AGS 90th Anniversary Award Ashwood Trophy, was the South African, narrowly endemic member of the iris family, Lapeirousia oreogena, exhibited by George Elder. In its homeland, the mountains of north-western Cape Province, it grows in clay soils that bake hard in summer, but in cultivation, in a pot, it requires a free-draining, gritty mineral soil that dries out in summer, resuming watering as the new growth appears. Pollination is interesting in that the flower has a long (60 mm) floral tube, at the bottom of which lies the nectar, only be reached by one or two species of long-tongued flies. 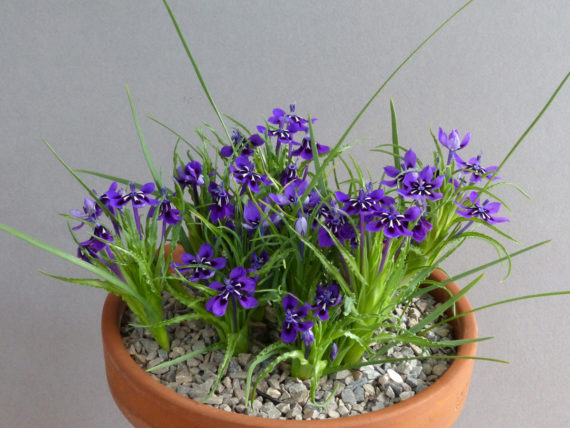 There were so many crocuses that could be mentioned but at this early season those known affectionately as ‘Tommies’ (Crocus tommasinianus) are particularly valued because they are such easy garden plants, indeed some would say that if left unchecked they can become a menace, although in this regard they have the advantage of disappearing from the scene by mid-March. From many varieties exhibited I have only space for one, ‘Silver Lining’, shown in the Intermediate Section by Sue Bedwell.  The fine mauve lines on both the inside and outside of the silvery cream petals were both unusual and eye-catching. 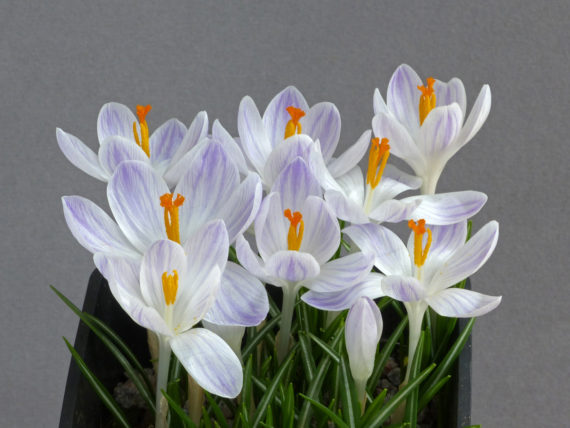 Finally, there were many interesting, and in some cases spectacular exhibits of irises on display, but perhaps especially noteworthy on this occasion was the number of large pots of widely grown and universally admired I. winogradowii, the best of which won a first for Ian Robertson. This too is a good garden plant, ideal growing conditions in lowland Britain being a well-drained soil in either an open, sunny position or under the canopy of deciduous shrubs. This will keep the bulbs dryish during the summer, essential if they are to spread out into large colonies. Plant the bulbs about 8cm-10 cm (3in-4in) deep in the autumn. 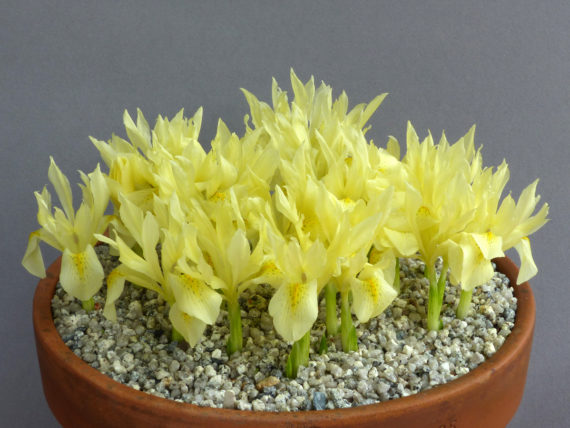 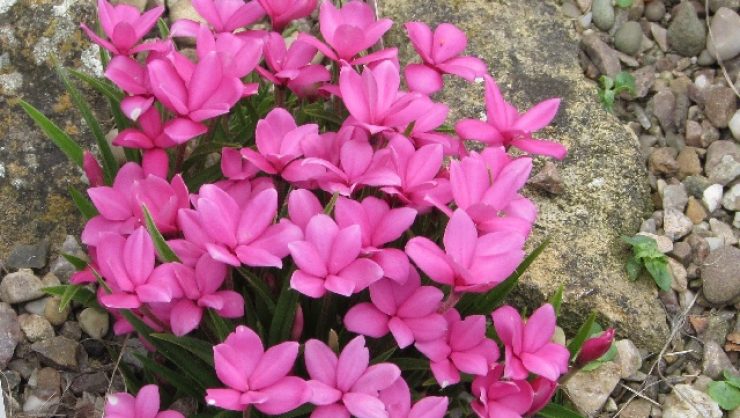 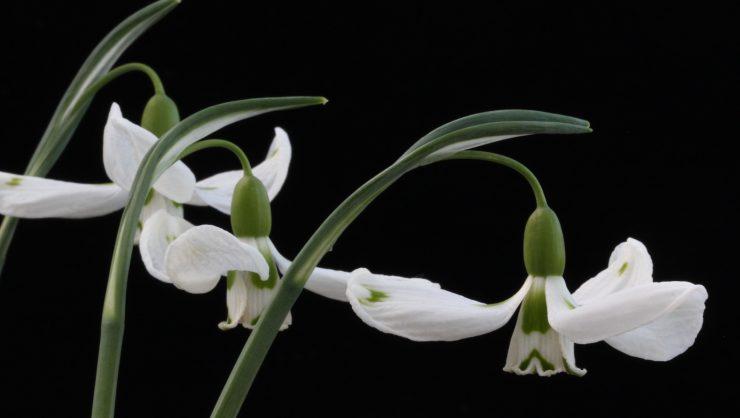 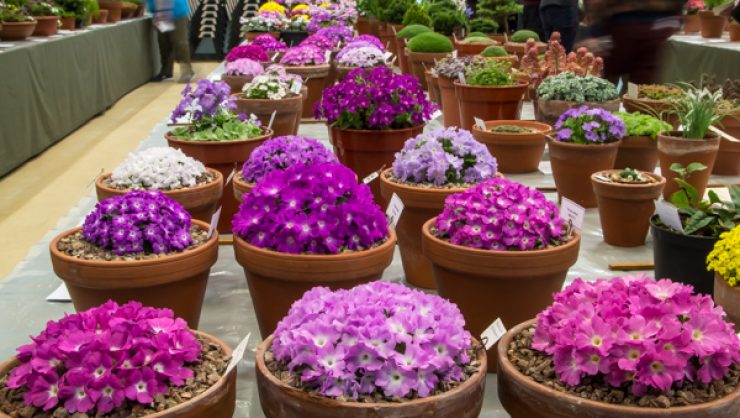