A spring morning saw us heading to Hexham, the daffodils in full flower and the salt-laden road edges white with Scurvy Grass. This year’s spring show has moved to a new venue, which will also host the autumn show (formerly held in Ponteland) at Hexham Auction Mart, just across the railway line from the former leisure centre venue.

Exhibitors will miss the opportunity to use Waitrose supermarket trolleys but they will not miss the ever more complicated disc parking arrangements in the main town car park. The Hexham show has always been one of the best attended; would this carry over to the new venue?

The new venue was excellent. A large (free) car park, with a smaller area round the corner for exhibitors, a very large foyer area allowing for lots of nursery stalls, a well-appointed café area, leading to the show hall in the banqueting hall – not many show halls have carpets and expensive wallpaper. The benches were full, with 61 exhibitors exhibiting 586 plants. As for concerns about attendance, the queues waiting to get in at 11 am showed us we had nothing to worry about. A record number of visitors turned up. 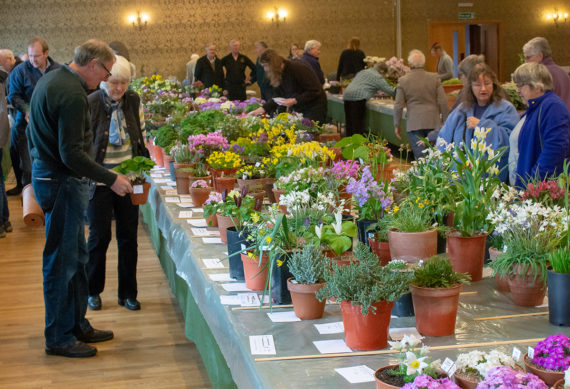 This was one of those shows where the Farrer Medal stood out. Shortia uniflora, grown by Cliff Booker, had nearly 30 frilly white flowers evenly spread across the plant, whose glossy green foliage was in perfect condition. It thrives in the moist atmosphere of the Lancashire foothills of the Pennines, happy with the rain and the snow. Kept outside but shaded from the sun at all times, it enjoys a bark-rich, woodland compost. 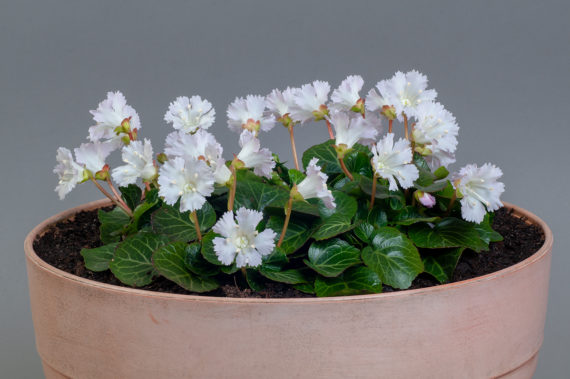 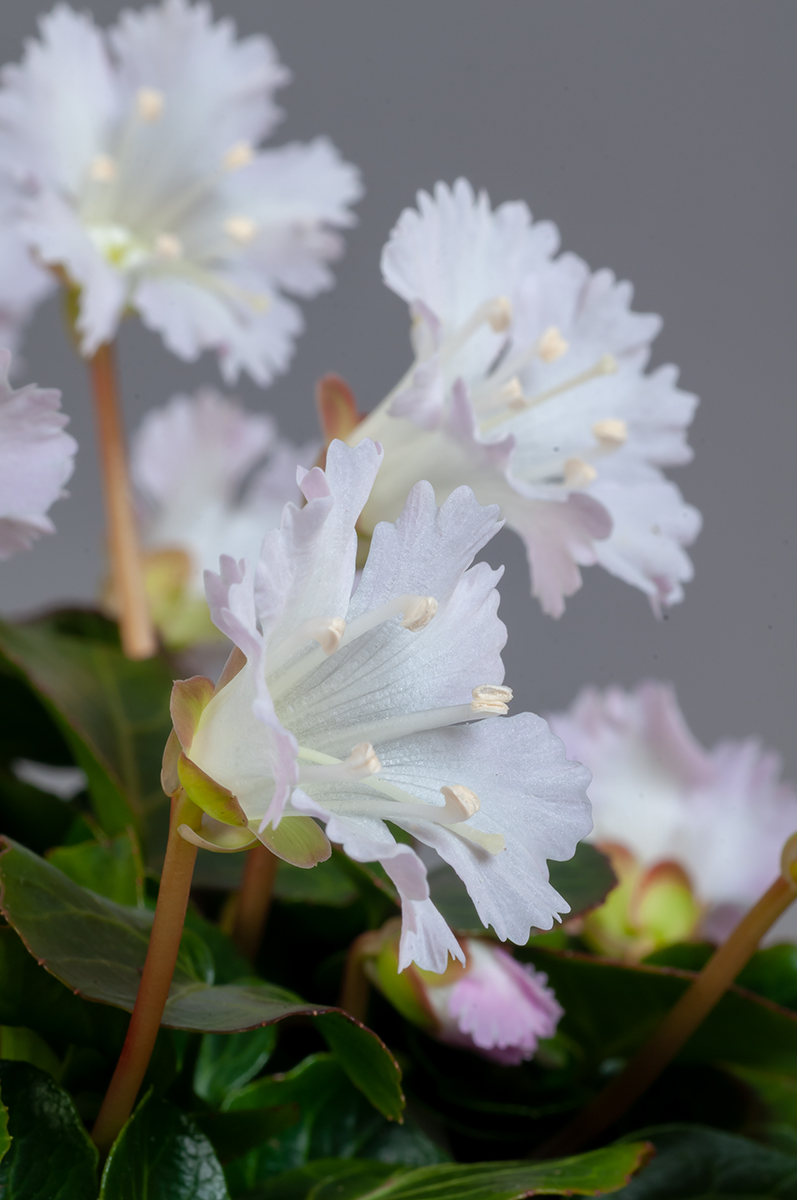 A Certificate of Merit was awarded to the closest runner-up, one of two plants of Saxifraga ‘Bridget’ shown by David Charlton. Over the years, this has proved an excellent show selection for different exhibitors. It grows relatively slowly compared with some porophyllum saxifrages, so can be entered year after year, and since each stem bears several flowers, it means it is usually serviceable over several weeks. It is also very forgiving. Most saxifrages suffer from burning when they kept too hot and dry. This leaves a dead patch, which, if not fatal, leaves them hopeless for show purposes.

The hot summer of 2018 meant there were few large saxifrages on the bench – many of your reporter’s plants had certainly suffered from the heat. David’s plant of ‘Bridget’ suffered too on one hot day when it wasn’t shaded. But a little judicial snipping and rebuilding left only a scarcely noticeable gap. David grows his plant in a straightforward mixture of grit and John Innes No. 2. He brings it under cover in the worst of winter, in December/January, but says that that is probably unnecessary. The only difficulty is getting the sunlight quota right. The more sun, the more flowers… but the more chance of burning. 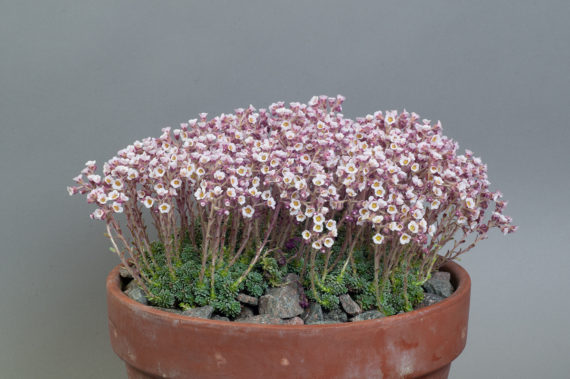 Saxifraga ‘Bridget’ is a typical example of a plant that performs well year after year for its exhibitor and can easily be ignored by others. Tom Green showed a plant labelled Coronilla emerus subsp. glauca in the class for flowering shrubs. At a time of year when many flowering shrubs at shows are drab, its bright yellow, pea flowers brighten the bench. The main problem is that it has a strong scent, reminding its owner of cat pee. There is also some taxonomic confusion here; I believe that the plant is correctly Coronilla valentina subsp. glauca. A plant of Mediterranean countries, it is reasonably hardy. Tom lives in a cold part of the country and keeps it in a cool greenhouse. This is especially important as the flower buds set early. If it gets straggly it can easily be cut back to keep it compact. 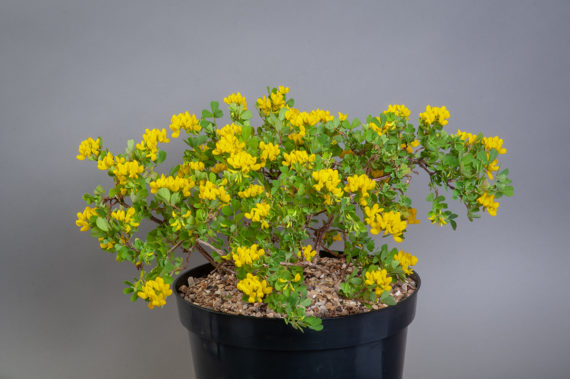 A more serious alpine from Colorado, grown by Tom in a well-drained gritty compost, Townsendia rothrockii typically has pink rays around a yellow centre. This version was white with a yellowish-green centre: a very refined combination! 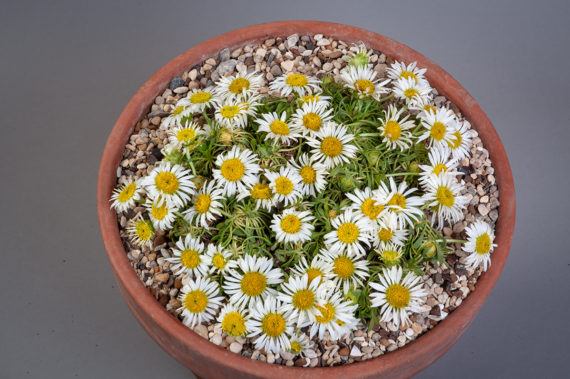 Looking for the unusual, the colour of Viola chaerophylloides ‘Beni-zuru’ stood out: rose-pink with a touch of magenta, darker red towards the centre of the flower and then a pale eye. It may not have won its class but received lots of covetous looks. Clare Oates grows this Japanese woodlander under the bench, moving it outside during the summer. In the winter it is kept dry; the soil mix is a typical, well-drained woodland soil with plenty of bark. 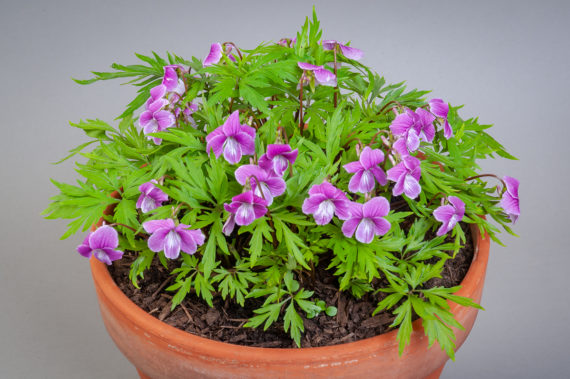 Putting together an entry for the large six-pan class sometimes obliges an exhibitor to select something unusual to complete the six. Stan de Prato’s AGS Medal-winning entry included Erodium pelargoniiflorum, a plant which divided opinion, partly because it does resemble a Pelargonium in many ways. Questioners asked ‘Is it hardy?’ and ‘Does it look like an alpine?’ It is certainly hardy in its Scottish home, grown in an unheated greenhouse and kept fairly dry. A native of southern Turkey, from the Cilician Mountains, it should also be considered an alpine. Whether you like it or not is a matter of personal preference. (Ed. This may well be Moroccan E. trifolium, which grows happily outdoors, even seeding into paving stone cracks.) 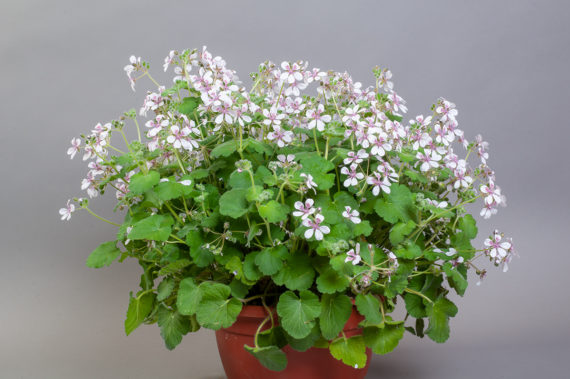 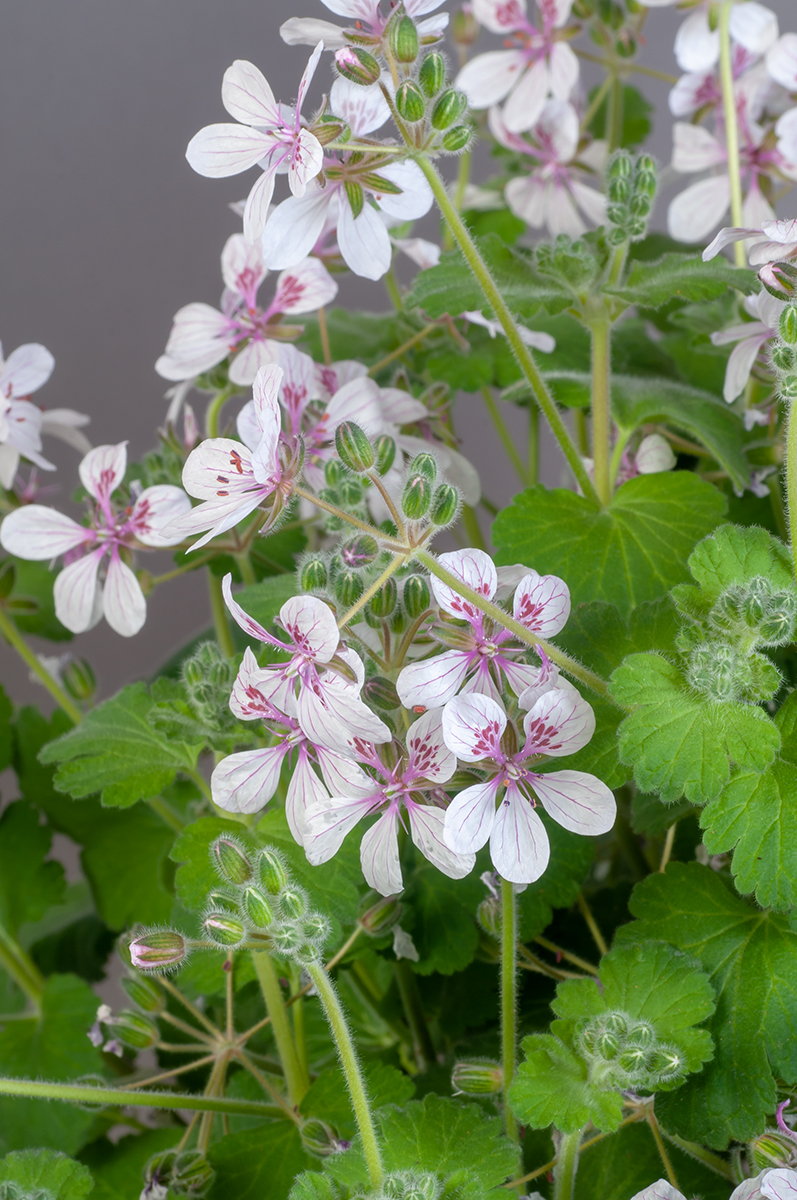 For the smallest plant to receive a red sticker, the prize must go to Alan Furness’ plant, new in cultivation, of Androsace zayalensis. When the ten flowers came out, they were not nearly as bright a shade of pink as the buds. Flora of China suggests the colour should be purple but accompanies that suggestion with a question mark. Raised from Holubec seed sourced in Tibet, it is kept in an Access frame, open in the growing season and closed in winter. The compost comprises equal parts of John Innes No. 3, pumice and coarse grit sand. 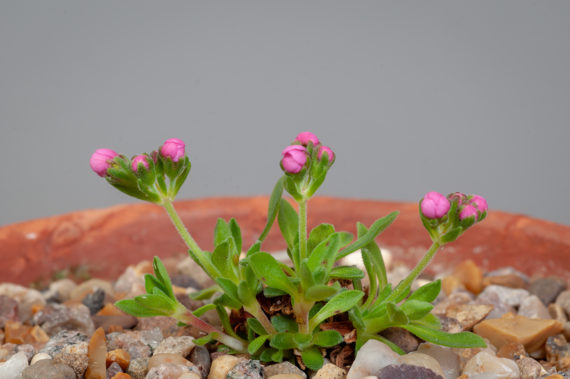 The partner class to ‘new in cultivation’ is that for plants rare in cultivation, won by Tulipa ulophylla, a fine species with dark crimson flowers. This stock was from the Olang Pass in the Elburz mountains of northern Iran, growing in rocky soil at the base of steep cliffs. The species is sometimes confused with T. systola but is distinguished by the black bases of the petals. Dave Riley grows it in a gritty bulb compost, keeping the bulbs dry in their summer/autumn dormancy, repotting in early December and providing plenty of light once the shoots emerge. 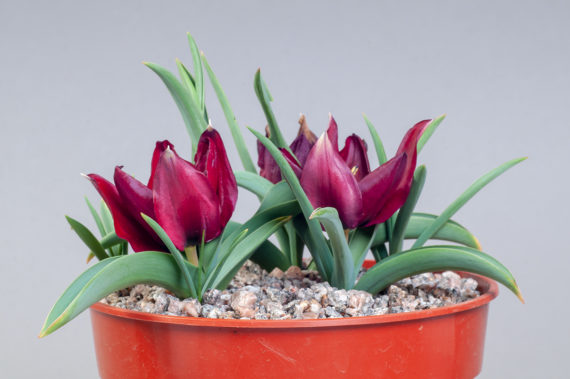 When you had finished looking at the plants – nearly six hundred of them – then there were the non-competitive displays. The Royal Botanic Garden, Edinburgh brought their usual fine display of bulbs and other early flowers, to produce a massed display of juno irises, scillas, muscaris, erythroniums, anemones and dwarf narcissus. You can always find something interesting to look at (your reporter was fascinated by the range of different shades of yellow among their plants of Iris bucharica).

Mala Janes from the Local Group put together a large display of photos, diagrams and information under the title ‘A Woodland Wonderland’. Many of the photos came from the garden of the late David Boyd, a much-missed gardener, exhibitor and personality who belonged to the AGS North East Group and indeed many other gardening organisations.

The end of another great day. Thanks to show secretary Angus Thompson and all his helpers, to the nurseries and especially to the exhibitors. Even quite ordinary plants add to the overall  display and are most welcome. 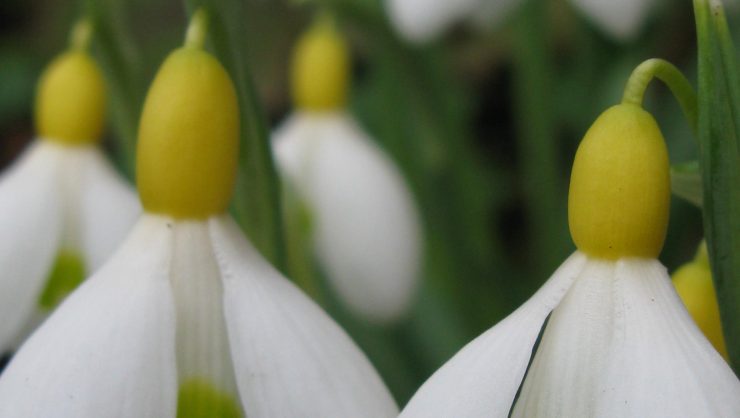 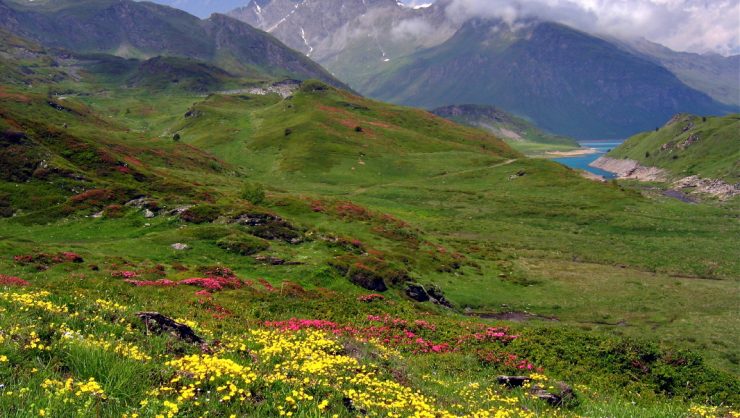 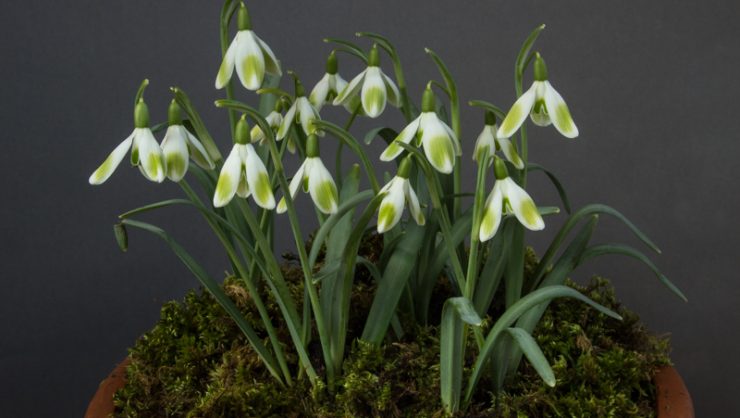