The Early Spring Flower Show delighted visitors with a host of superb alpines in its new Theydon Bois home.

The Farrer Medal for the best plant in show went to Peter Hood’s Corydalis sewerzowii. The same plant was also triumphant at Loughborough last year. Bigger and better than ever, the forest of 20cm stems bore butter-yellow flowers with darker spurs.

These plants originated from fresh seed gathered from Professor Brian Whitton’s National Collection in 2013. Virtually every seed germinated – although not all in the same year – and three mature tubers now lie in the same pot. Above them, a bottomless plastic pot guides the developing stems to the centre and the whole volume above the tubers is filled with nothing but grit. Several of the Leonticoides Section species tend towards straggly decumbency, but this is neatly overcome by this inventive strategy. Pots are kept outside during the winter and spring, except in the most severe weather. They are dried off under glass when plant growth stops. 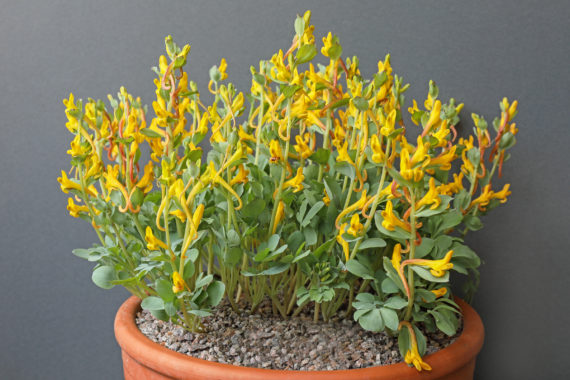 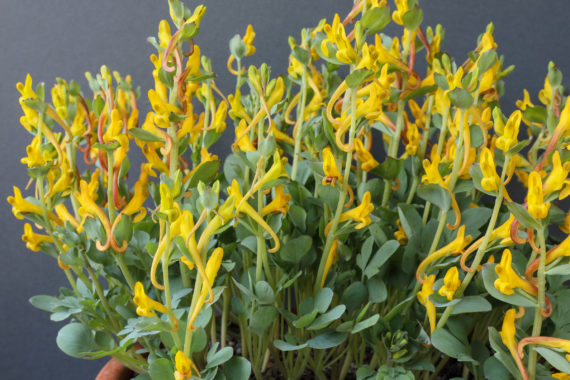 Don Peace’s Hepatica japonica won the 90th Anniversary Award for the best plant in a 19cm pot. This white-flowered form has attractive, purple, sterile anthers. Interestingly, it arose from seed produced by Clare Oates’ similar plant, which was sown green in 2013.

We presume this form is apomictic – meaning the seeds are produced asexually as carbon copies of the mother plant without need for fertilization. This is not unusual in the Ranunculaceae, where the process is usually pseudogamous – meaning pollen is needed to stimulate the plant’s stigma before seed is produced asexually. Possibly, Clare’s plant was pollinated (but not fertilised) by pollen-bearing hepaticas in her collection, leading it to produce seed. 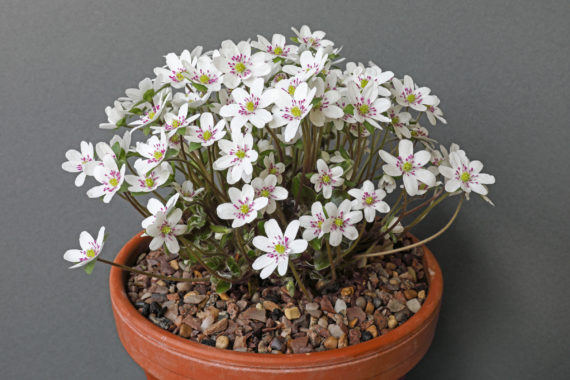 Clare herself brought a lovely ‘pubescens’ type’ Primula to the Epping Forest under the name ‘Ellen Page.’ This was covered with over 100 almost stemless 18mm dull magenta flowers with a contrasting white ‘eye.’ 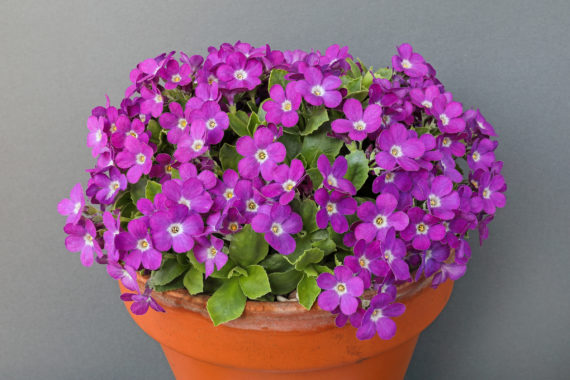 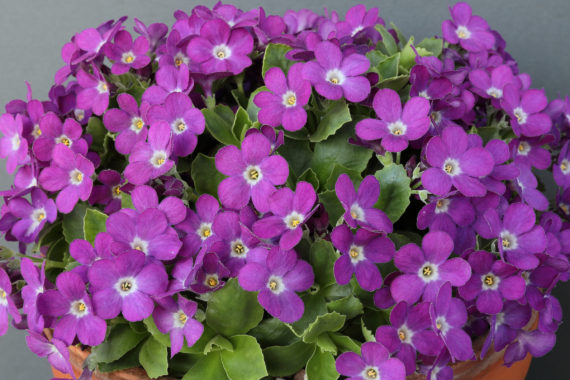 All representatives of the F. messanensis aggregate that come from North Africa are named Fritillaria oranensis. Although more often placed with the westerly F. lusitanica, the narrow grey leaves, whorl of three bract-leaves and long bell are equally reminiscent of the chiefly Balkan, but also Sicilian, F. messanensis.

F. oranensis is native to several North African countries and is understandably variable. But this one, exhibited by Bob and Rannveig Wallis, had smart puce bells with a clean green fascia. It was interesting to see that the yet-to-flower seedlings in the same pan had much broader, shiny green leaves – totally different from their more mature counterparts. 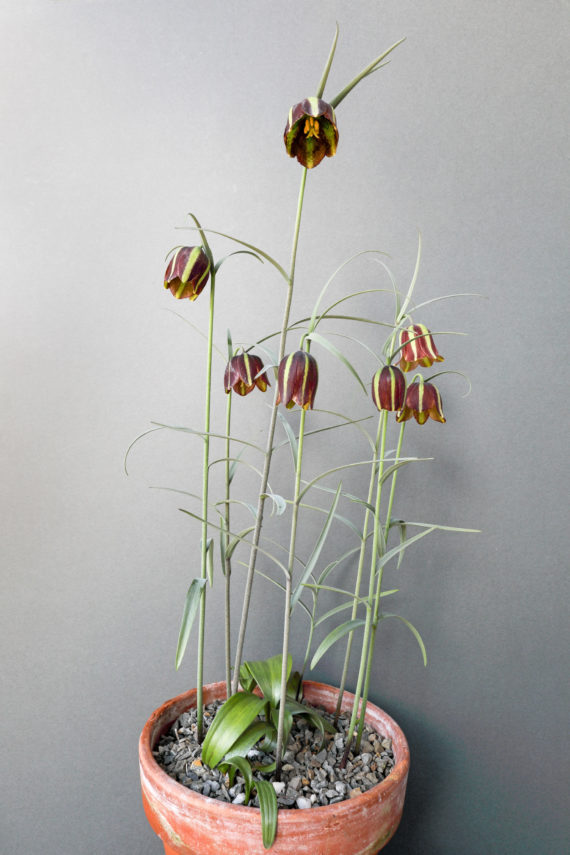 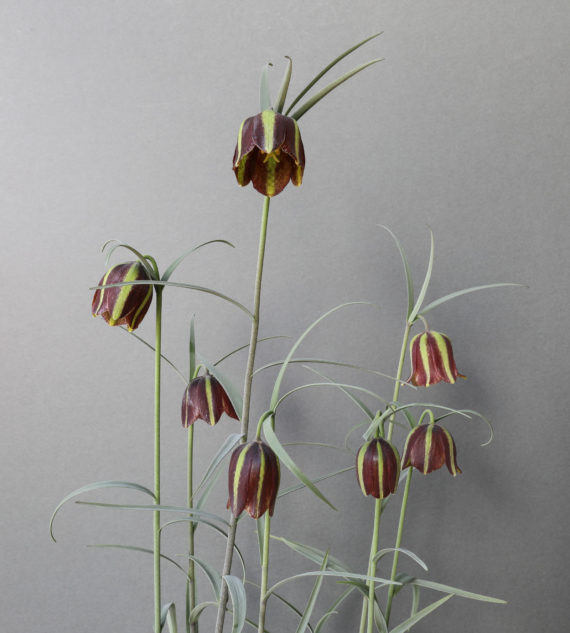 This Rhododendron dauricum ‘April Rose,’ benched by Ben and Paddy Parmee, shone out by virtue of its clusters of semi-double magenta flowers.

Originally from far north-eastern Asia, this variety is very hardy. Although 40cm high, the delicate, controlled growth make it more suitable for container growing than most. 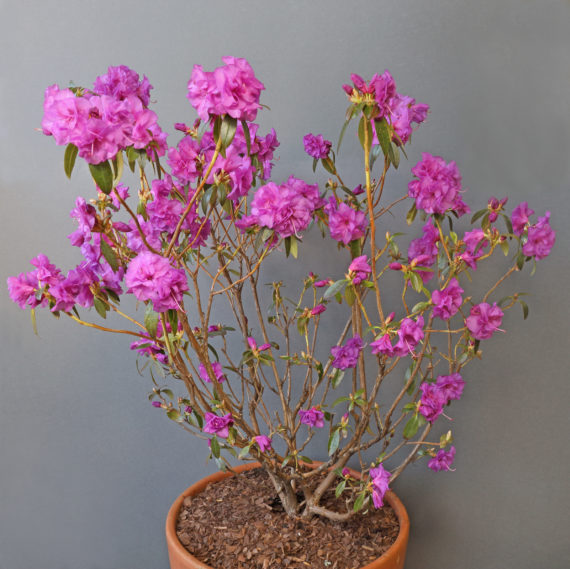 Ben and Paddy also produced one of the few snowdrops on show. It was a fine, well-balanced Galanthus elwesii ‘Polar Bear.’

Measuring 15-18mm wide, this cultivar has some of the widest leaves of this variable species. It is also distinguished by the length of the vivid green basal mark on its inner petals. A relative latecomer to the snowdrop scene, ‘Polar Bear’ has rapidly gained a good reputation for its vigour and late-flowering habit. 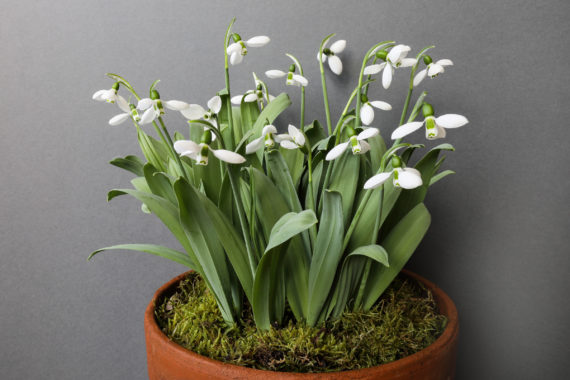 More charming spring-flowering bulbs typical of the eastern Mediterranean are the gageas and ornithogalums. Avid fans of crocuses and tulips tend to overlook them, not least because many are hard to tell apart. However, some ornithogalums are starting to earn their spurs on the show bench.

One of these is O. lanceolatum (Diane Clement). In this plant, the initially stemless clusters of white flowers are offset by broad, shiny, prostrate leaves that lack the white stripe typical of many Stars-of-Bethlehem. 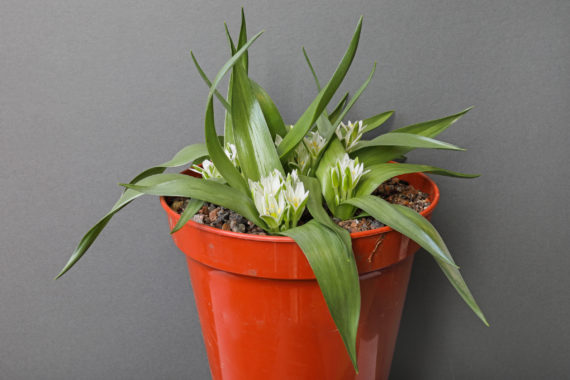 At our Shows, the variety of Pleione species available for exhibition has been eclipsed by the many hybrids that have been raised in the last three decades. Some of the parental combinations now available are eclectic, even eccentric in nature.

Take, for example, Robin Alabaster’s P. ‘Sirena,’ which is a cross between the legendary spring-flowering, yellow-orange P. forrestii from Yunnan’s Cang Shan and the winter-flowering Himalayan P. humilis. This unlikely union has produced an attractive dwarf, with pale rose flowers arising above purple bracts. It has also helped to spread the season as this variety was in the pink on the last day of February. 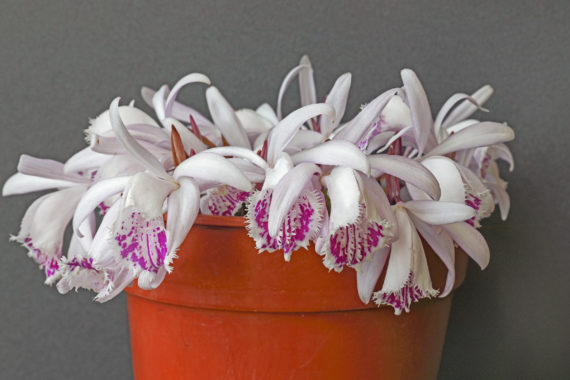 Last, and smallest, but by no means least, was Delosperma sphalmanthoides. This plant was voted the best in the Novice Section and won exhibitor Matthew Jeffery the Donald Lowndes Memorial bowl.

Perhaps the tightest and most congested of these alpine succulents, the plant was covered with tiny pink flowers. It was a worthy winner of the trophy. Such plants are often from Drakensberg, but in this case the plant was from 1,600m in the Western Cape. 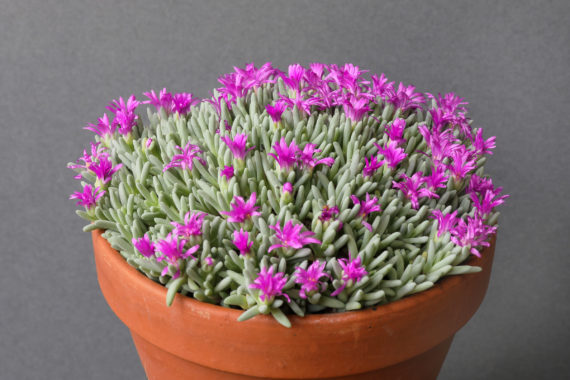 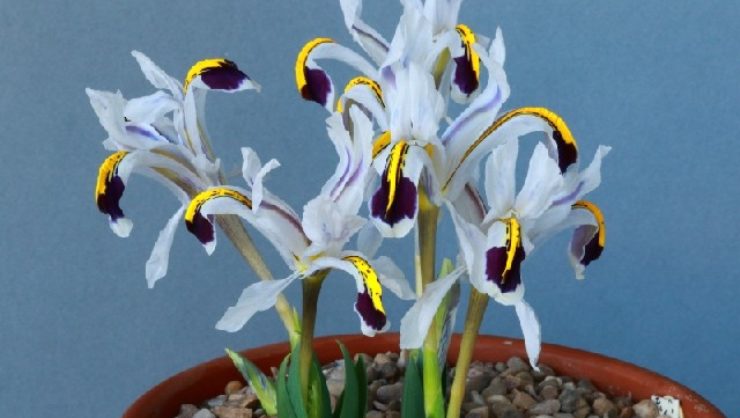 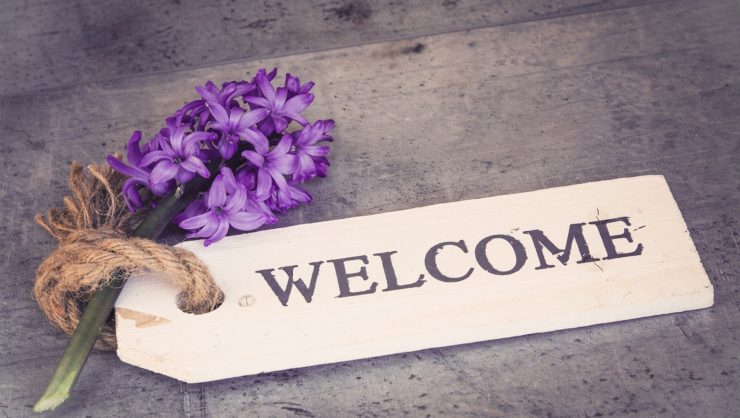 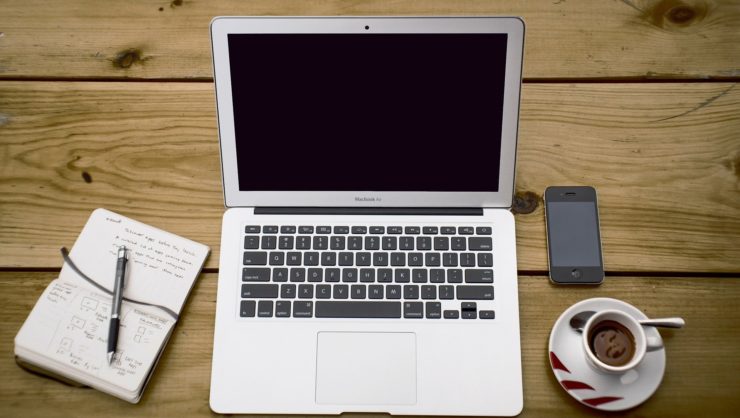