Although many caution against sowing alpine seeds in summer, I believe that certain species may be better suited to a summer sowing.  I offer this as an alternative for nuisance plants where you have not gained satisfactory results using normal techniques.

Why Sow Alpine Seeds in Summer?

We normally associate sowing alpine seeds with the cold of winter, but there are reasons to sow alpine seeds in summer for certain species. The need for stratification (breaking seed dormancy due to temperature exposure) makes winter the usual time for sowing and one which is advisable for many species. I have a slightly different approach for certain species and have had moderate success.

I am currently back in my childhood home near Glasgow in a garden which endures frequent rain – statistics state an average of 1079mm of rain over a period of 167 days. Prolonged exposure to high levels of rainfall can cause bad conditions for some alpine species. For this reason, I decided to sow seeds of Dianthus and Draba in the summer, and was fairly impressed by the results. 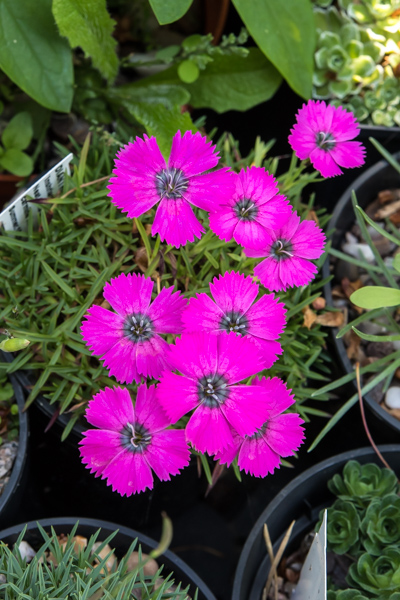 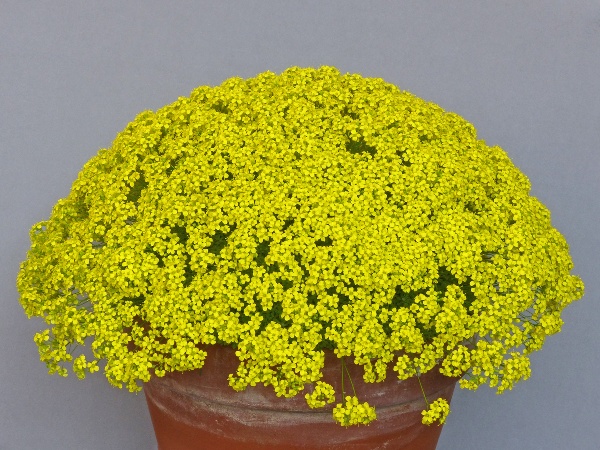 It is important to select the correct genera for sowing alpine seeds in summer. I would recommend alpines that are more adapted to heat and annual species which are fast-growing. Although I have an extremely limited range on the subject, I have had success with a fraction of the species available to me. You can procure such species through plant societies, such as the AGS, who offer an incredible range of seed available in the seed exchange.

I will offer my sowing alpine seeds in summer method. Please think of this as a recipe and adapt it to your taste. One of the fundamentals is the porosity required to allow the compost to drain adequately. The degree of drainage will be slightly different based on your location, I  recommend asking members of your local group for their methods as their advice will be better suited to you than anything I can provide. I recommend sowing on a cooler day to allow the seeds to acclimatise. Fellow alpine garden diarist Katherine Woods offers an alpine seed sowing walk through which I recommend for further reading on seed sowing.

I base my choice of container entirely on the volume of seed, materials available and environmental friendliness. I tend to use plastic containers as I find the coir pots can get frequently damaged and dry out rapidly. Plastic cell trays are ideal for saving space but in my experience are prone to breaking and seedlings are difficult to remove with their root mass intact. Seed and cutting trays are commonly used and simply require a label to divide the sections. Single pots are useful as they can be moved individually and can be reused year after year if they are well cared for, therefore, cutting down on single-use plastics.

Step 2 – Keeping Track of Your Seeds

I remove the seed from the fridge (where I keep all my seed) and write the labels. The full name of species, date, and source are written on a label with either pencil or (not so) permanent marker. All the information can be kept on a spreadsheet to keep track of all your seeds. I take photographs on my phone (as shown below) to record dates of germination and progression. Also, I use this as an ordering system for the pots, helpful should any of the labels disappear. I try and perform this task on the day while the information is fresh to avoid confusion. I do not always succeed as I can often get a little overexcited about the seeds. 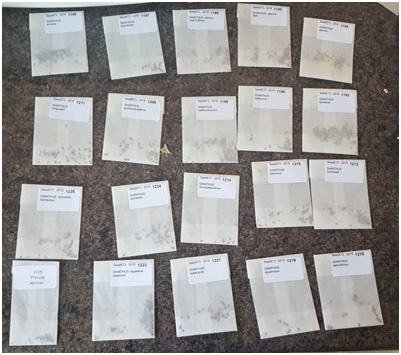 Step 3 – Bottom Half of Your Pot

Once I have selected the container, I fill it approximately halfway with John Innes number 2 mixed it 50:50 with grit.  Under lockdown I ran short of grit and used pure John Innes number 2. Without the grit, I found, when potting on some of the seedlings, that the roots would rip as pure John Innes number 2 is too heavy a mix on its own (especially when wet). My logic is that when the seeds germinate the roots will push downwards and reach the nutrients in the compost allowing them to grow on until it is cool enough to pot on. I use a container to tamp down the compost to a level surface. 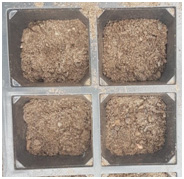 The soil mix I use for the remainder of the pot consists of a 1:1:1 ratio of seed compost, perlite and potting grit. The grit and perlite will provide both large and small drainage holes for water to seep through. As previously mentioned, I use a lot of grit and perlite, as I want my compost to be as free-draining as possible due to the high rainfall. Tamp down the compost to a level surface. 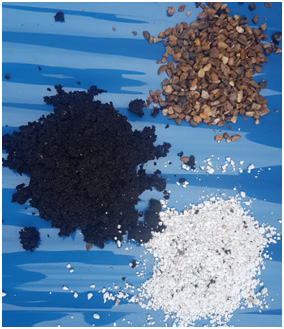 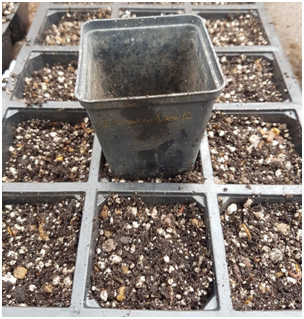 I then add a layer of vermiculite on top, so that I cannot see the soil below, this helps with moisture retention. As it is the summer (even a Scottish one), I do not want the seeds to dry out, as this will result in the seeds germination being delayed – Lewisia can be delayed up to 6 months. 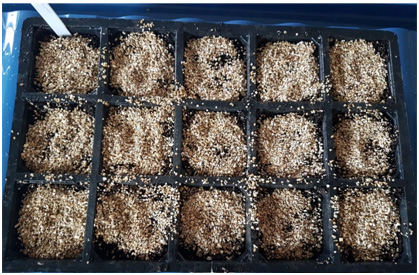 I examine the seeds to check for viability and then place the seeds on top of the vermiculite evenly so that the seeds can develop. The depth of the seeds will vary depending on the genus and/or species. If the seeds have the presence of elaiosomes (a fleshy structure rich in lipids and proteins which ants burrow under the ground) you should plant them deeper (in my opinion). Conversely, if the seed is a wind-dispersed, a thin covering just to hold the seeds down makes more sense. Once I have placed the seeds, I cover them with the mix or grit. I recommend that the grit selected is small as larger grit can make it more difficult for the seeds. 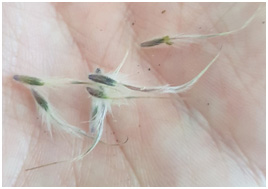 Fresh Pulsatilla campanella I collected from the garden 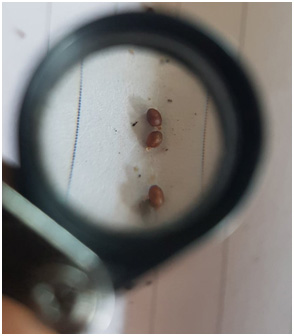 Checking the viability of Viola portalesia seeds under a microscope

I water from the top so that I know that the vermiculite is wet. I place the seeds in a shadier part of the garden which gets some evening sun. The placement is important as the baking sun will cause the soil to dry out and can prevent or delay germination, while complete shade can increase the chance of slug and snail damage once the seeds have germinated. Ideally, the containers should be placed on gravel to allow drainage, as a flat surface can prevent the water flow. This is less of an issue in the summer months but still worth considering. To improve the chances of success, you must care for the seeds. I give them a daily watering (a back and forth with the watering can) in either the morning or night (cooler parts of the day). When it rains I do not water. 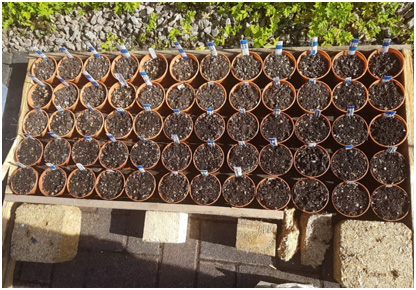 Guerrilla gardening with a deconstructed pallet to protect the pots.

The Bumpy Road To Success

It is important to not be deterred, gardening is fraught with success and failure. The ups and downs of the horticultural game are frequent. I can be upset for several days with the loss of a plant but the thrills of seeing the first seedlings pop out of the ground cannot be replaced. Knowing that I grew it from seed and here it is in flower is extremely satisfying. Now I can give it to others and finally, I can quantify my excitement to anyone that will listen or at least pretend to.

I sowed the seed in late May and early June. I have had good results with Dianthus and Draba so will focus on these two genera. The majority of the Dianthus seed (19/20) came from the Scottish Rock Garden Club (SRGC) seed exchange courtesy of Carole and Ian Bainbridge. I sowed this on the 4th of June. The majority of the Draba (19/21) was from the Alpine Garden Society (AGS) seed exchange and courtesy of Diane Clement who very kindly sent them to me with some cultivation aid. The seed was sown on the 28th of May. Here is a complete list of the species: 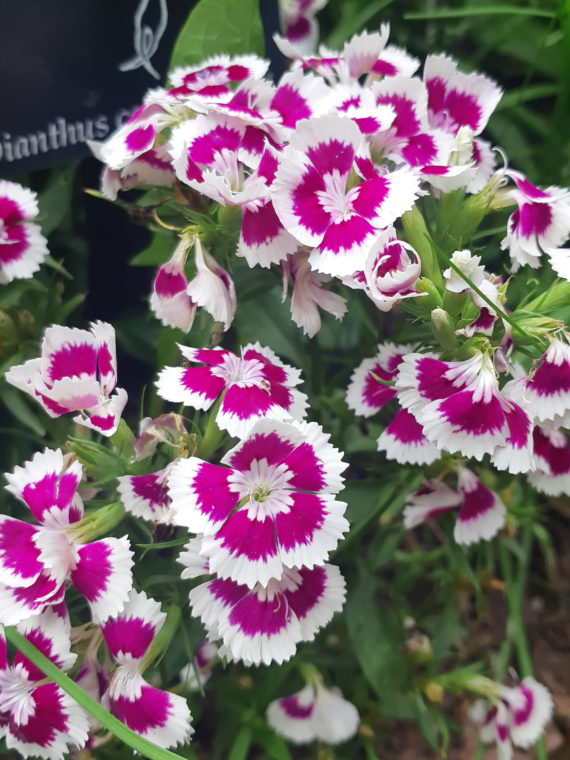 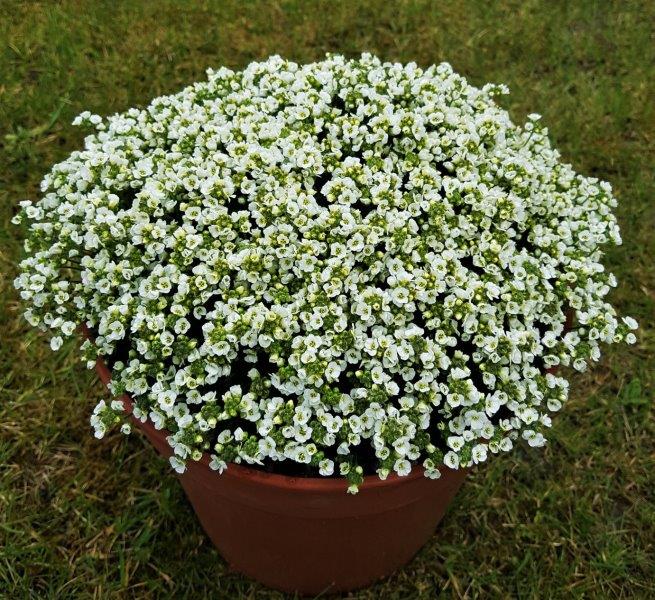 I recorded visible germination of the Dianthus on the 10th of June – six days after sowing the seeds – in half (11/21) of the containers. The Draba took longer to germinate and I recorded germination in 28/53 of the containers on the 20th of June. If we fast forward to the 1st of July, square eyes in front of a computer screen, third coffee in hand, looking out longingly as tempestuous droplets pour down once again… I left the sanctuary of the computer desk to sneak out during a momentary pause from above.

The seeds provided a morale boost as  20/21 containers of Dianthus had germinated and 43/53 of the Draba containers have germinated. The seed I had gained was old, therefore, I sowed them in small containers to save space. I should have known better than to question the societies. In hindsight, I would have sowed them in much larger containers or much thinner, as they have out-performed my hopes. 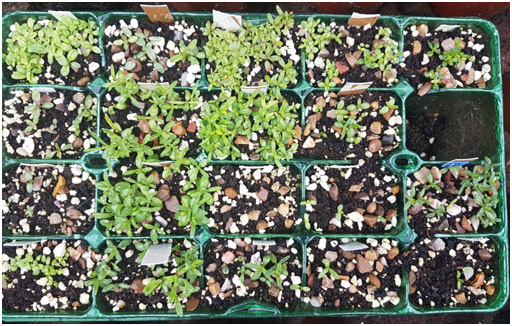 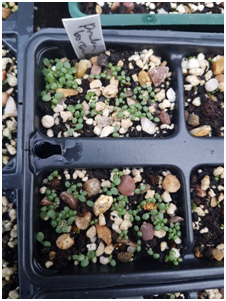 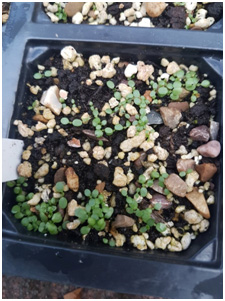 I am hoping to test and compare different sowing times with some genera, although, many variables can affect the results such as seed viability, seed storage, temperature etc.  This method is very much in its infancy and I am hopeful the results will be successful if you decide to give it a go. 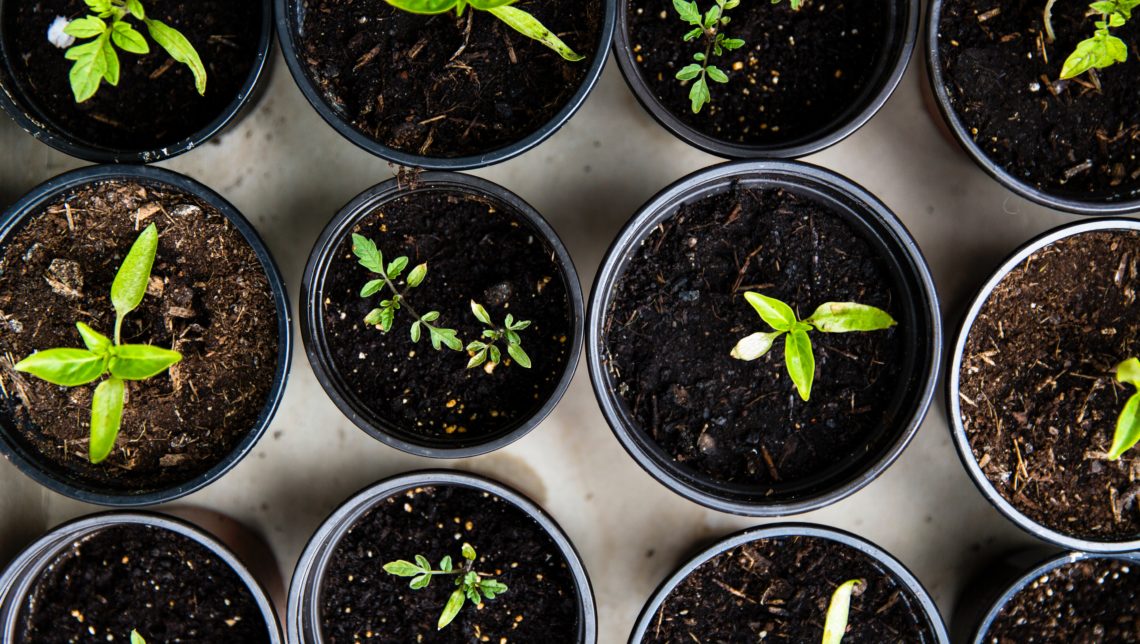 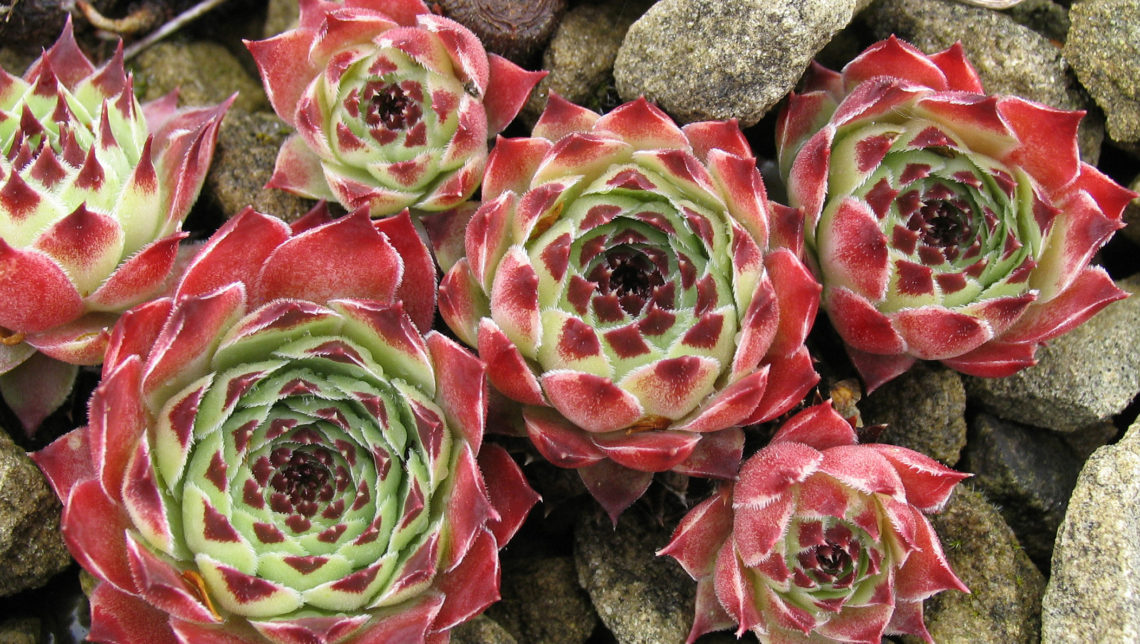 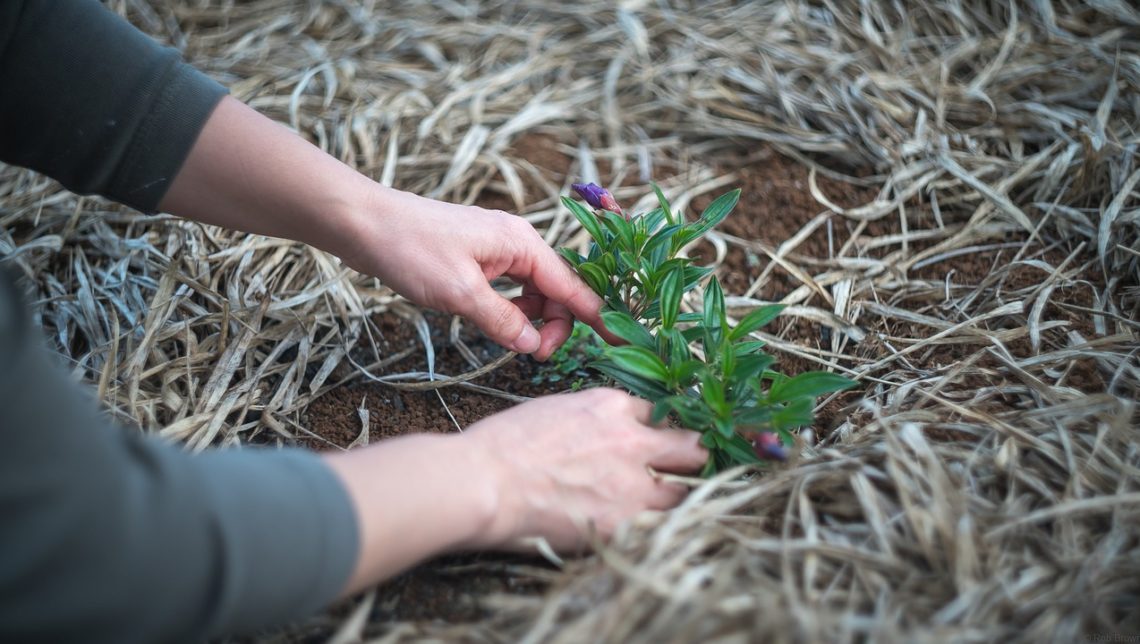 Beginners' Guide, How To
A guide to planting bulbs
Advice on buying and planting dried and pre-potted bulbs for those new to alpine gardening....
14 February 2019