The Mardale mountain meadow conservation project started in 2017 at RSPB Haweswater in the Lake District with the purpose of restoring native alpines in their habitat.

The AGS is one of four partners involved, alongside the RSPB, United Utilities and Natural England. The aim of the project is to restore native alpine plants to the fells around Haweswater reservoir, in an area the size of 42 football pitches.

Lee Schofield, Site Manager at RSPB Haweswater gives us the latest update from the project.

Development within the exclosure

It’s been a little while since we’ve last sent an update for the Mardale Mountain Meadow project. On the other hand the last couple of years have had more than their fair share of distractions and challenges. While us humans have been busy losing our heads over Covid-19, the plants in the Mardale exclosure have been quietly doing their own thing.

Alpines have continued to spill down off the Harter Fell crags and colonise the land within the fences. A carpet of Saxifraga hypnoides (mossy saxifrage) has been growing, and this spring, was visible from a mile away as a white patch on the slope at the back of the exclosure. In gravelly areas Oxyria digyna, Pimpinella saxifraga, Sedum rosea, Luzula sylvatica, Alchemilla glabra, Geranium sylvatica, Orchis mascula and many others are thriving, creating what is probably one of the most diverse patches of montane grassland in the Lake District on level ground. 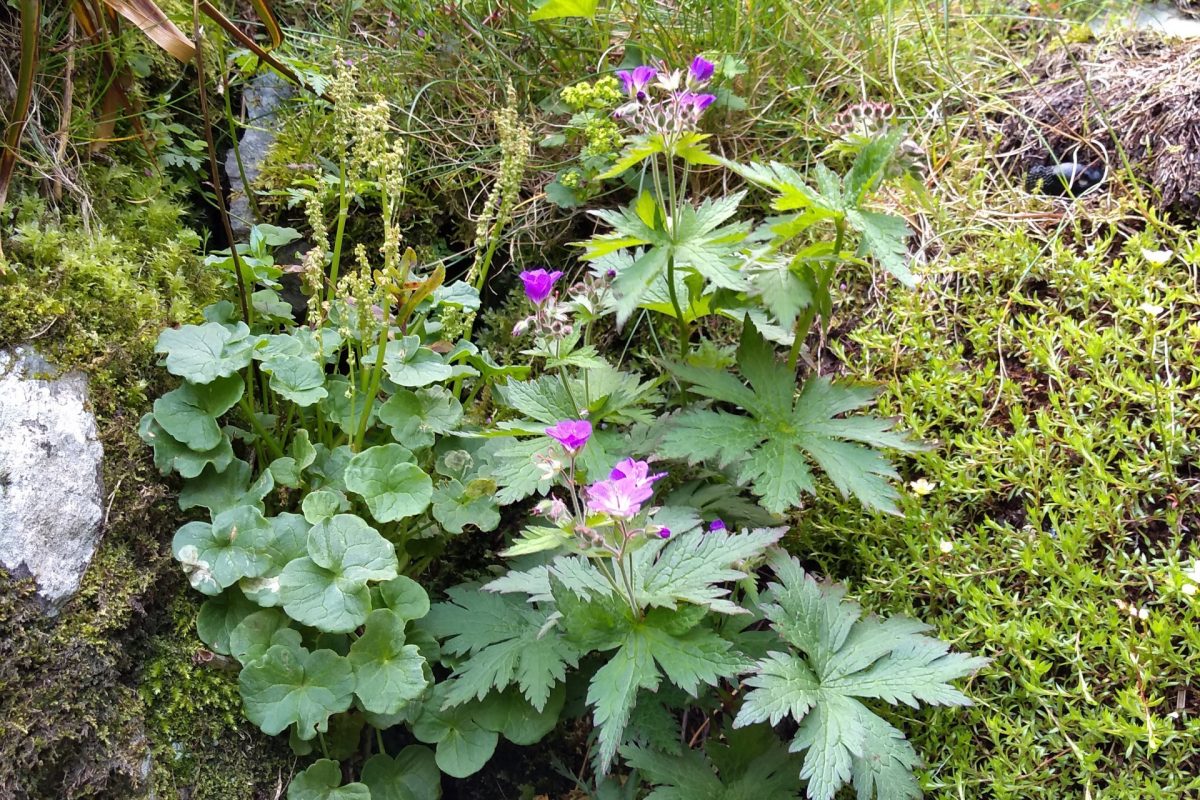 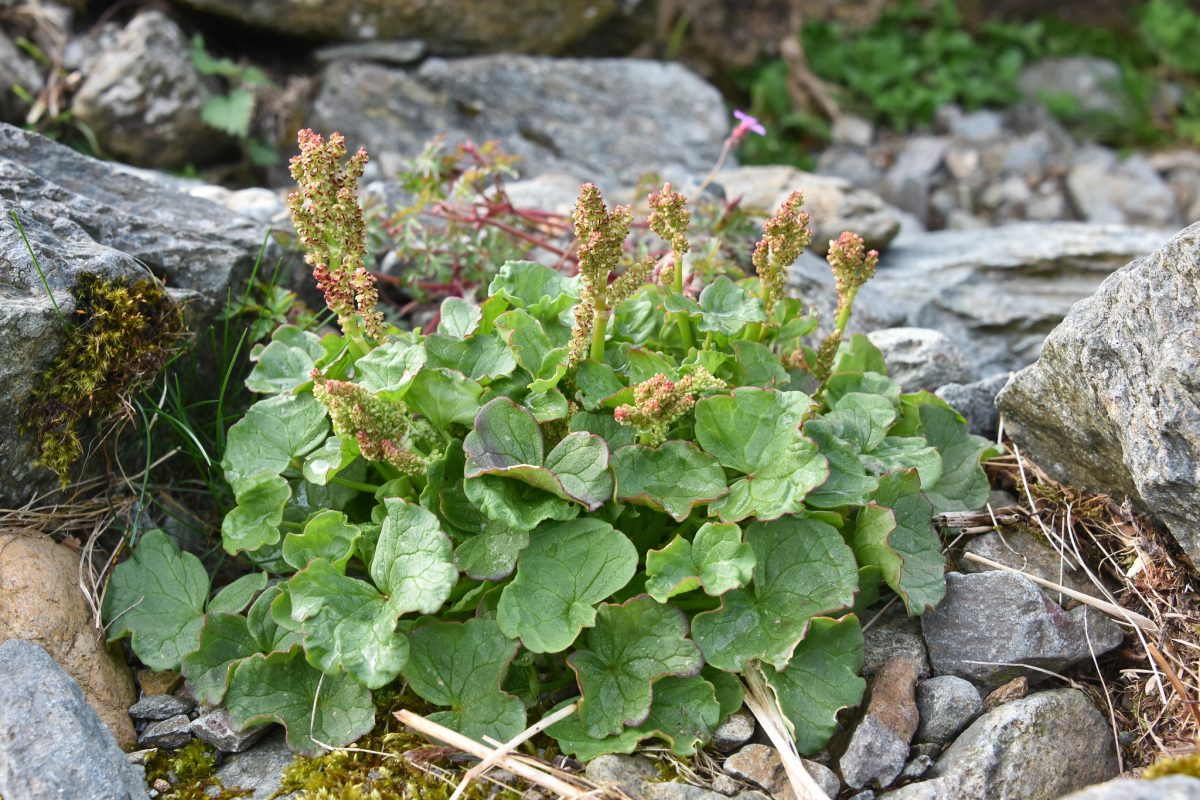 A rock fall last year has created some large areas of bare gravel, ready for further colonisation and expansion. This natural dynamism is part of what will help to keep the area rich and varied. In the wetter parts of the site, Narthecium ossifragum and Dactylorhiza maculata are continuing to spread, amid ever-growing multicoloured hummocks of Sphagnum mosses. Rowan, hawthorn, willow, birch and juniper trees are all thriving too. Both those that have been planted, but also as a result of increasing natural regeneration. In short, a largely hands off approach is working wonders within the fence. 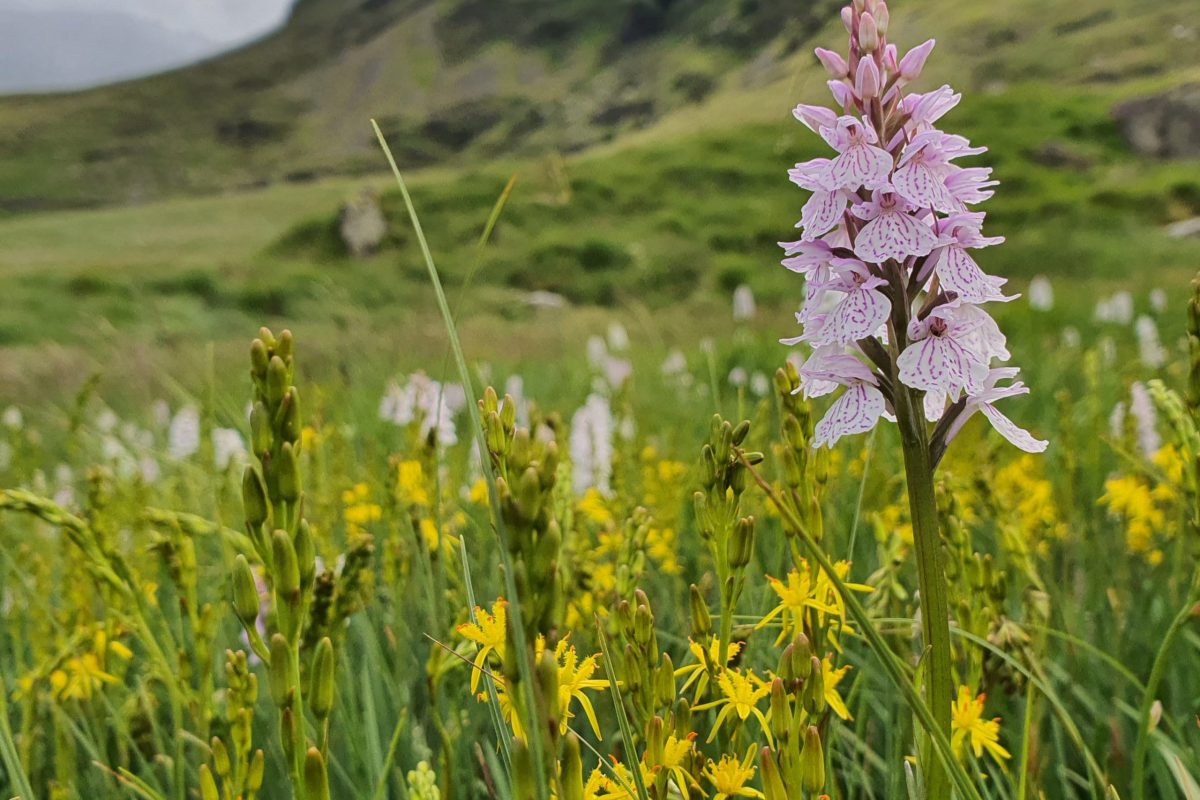 Late in 2020, we received the good news that we’d been awarded funding from Defra. The Green Recovery Challenge Fund allowed us to expand our nursery at Haweswater. Together with a further generous contribution from our landlord United Utilities, this funding has enabled us to build a series of raised beds on the footprint of a redundant barn and to employ a full-time tree nursery officer to help establish and run it. Following considerable interest, we successfully appointed Jo Chamberlain to the role. 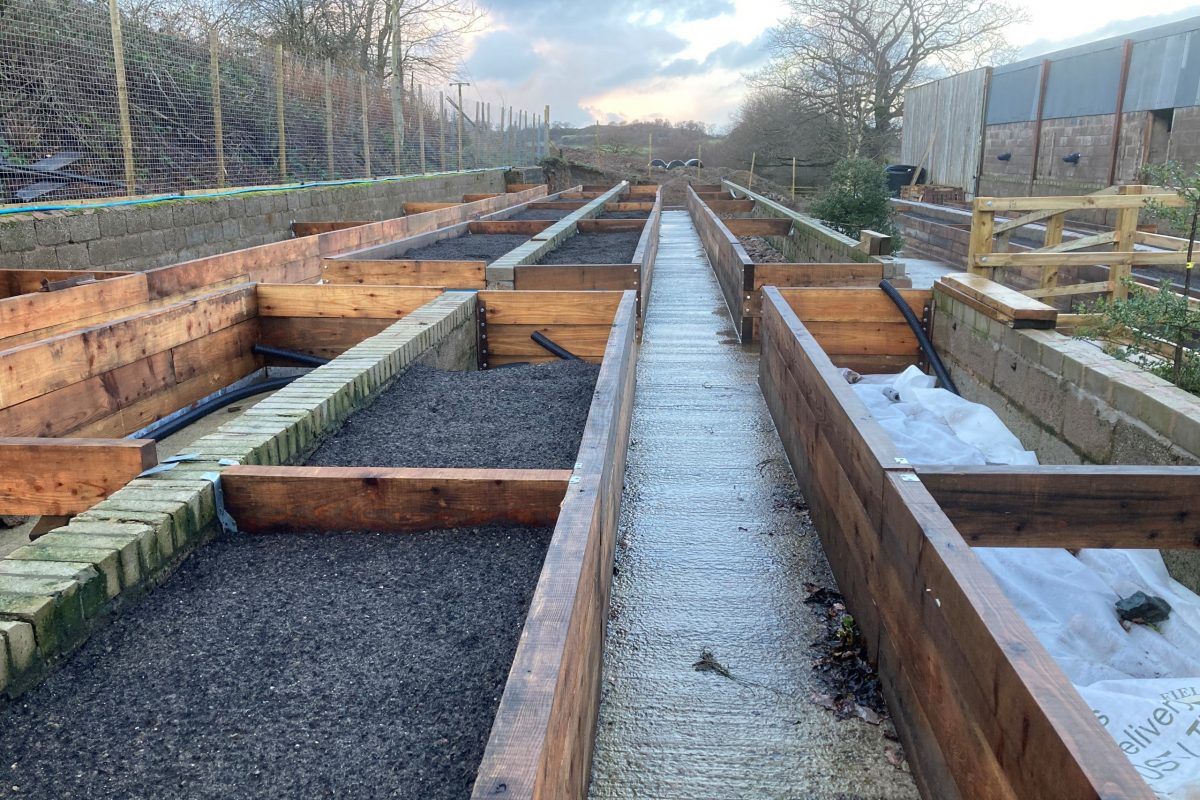 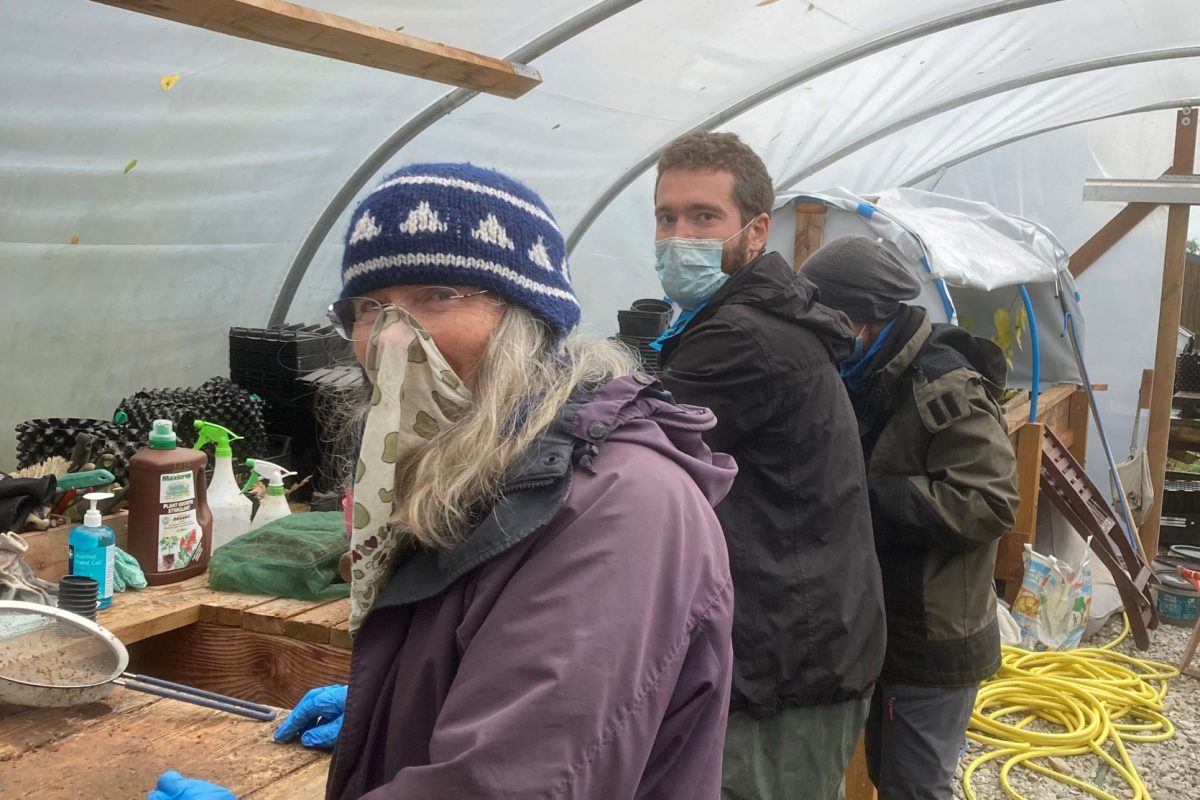 Jo comes with bags of nursery and growing experience and has a real passion for alpines. With Jo’s help, the new nursery facilities will mean that we can significantly expand our production of both wildflowers and trees, providing what we need for our habitat restoration work at Haweswater, as well as a surplus that we can provide to others. 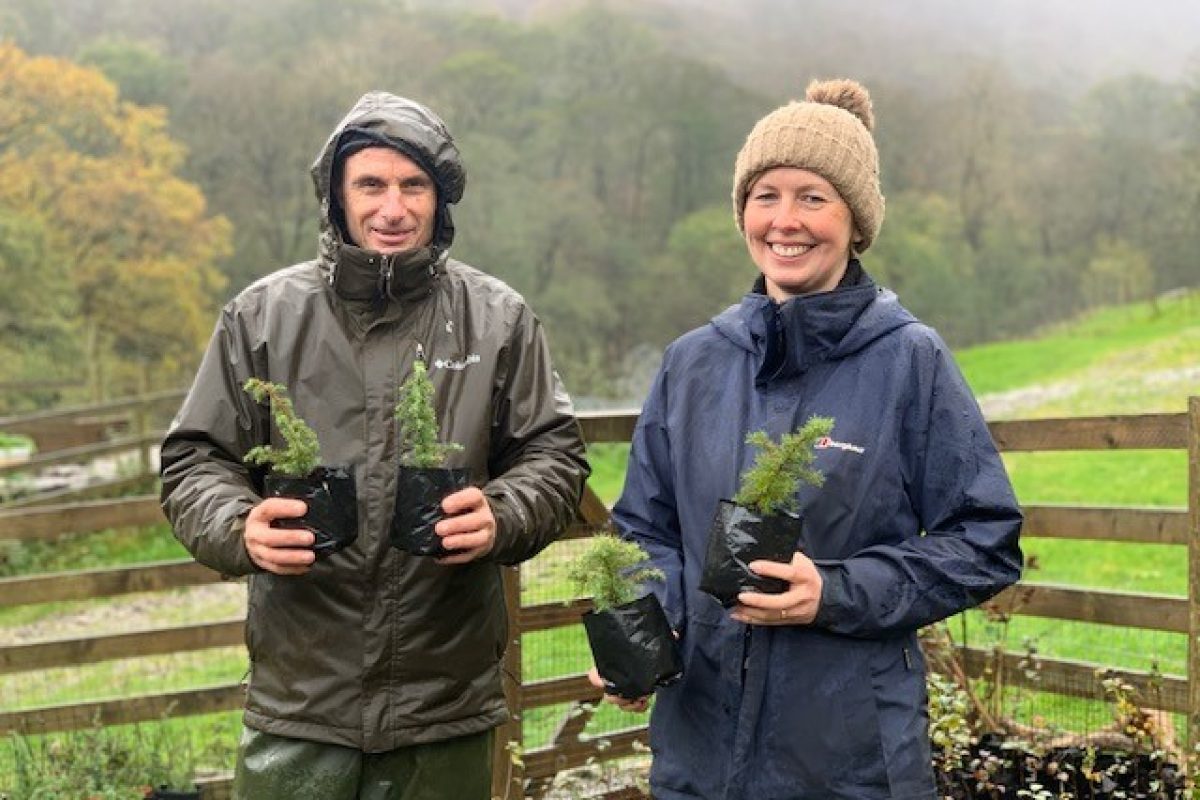 Spike and Jo with junipers in the nursery

One of the purposes of the Mardale Mountain Meadow was to provide a refuge for montane species that are struggling elsewhere due to grazing. Ajuga pyramidalis (pyramidal bugle) is perhaps England’s rarest mountain flower. It is known only from a single remote crag in the Lake District. This tiny population, which numbers around 50 plants, grows in a location that is inaccessible to livestock. Although safe from grazing where it is, sheep and wild deer prevent from spreading, as any seeds can only fall into more accessible, grazed land. Being restricted to such tiny patches of crag, a rockfall, or some other natural perturbation could easily threaten the survival of the species in England. 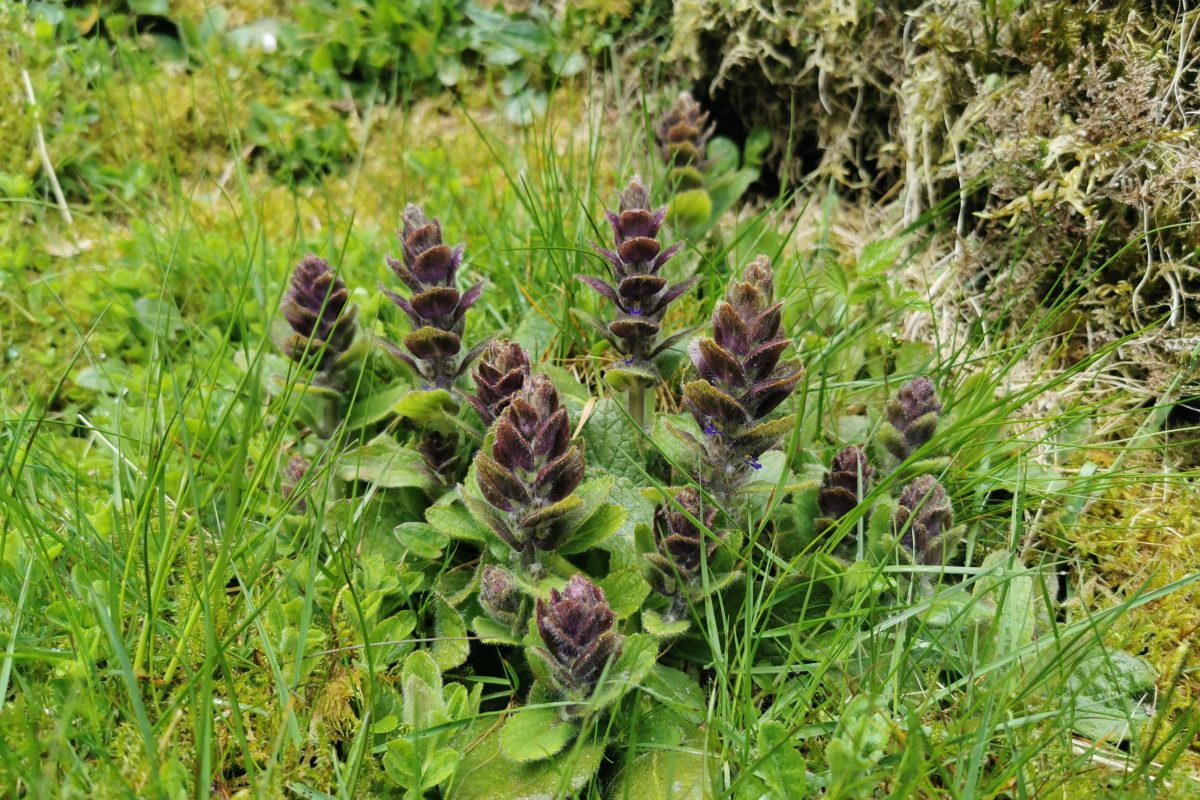 In 2015, seeds from this tiny and vulnerable Ajuga population were collected. Some were sent to the Kew Millennium Seed Bank, and others were grown into plants for potential future conservation efforts. Working closely with Simon Webb from Natural England, 12 of these plants were planted into Mardale Mountain Meadow in 2019. All have survived, and some have spread considerably, flowering profusely in both 2020 and 2021. Establishing a refuge population in Mardale improves Ajuga’s prospects and allows us to study how the species fares in an ungrazed habitat.

Salix lapponum (downy willow) is another highly vulnerable alpine species in England, growing only on the slopes of Helvellyn. At one point, there were as few as 23 living bushes, all of which were female. Thanks to concerted effort, again lead by Simon Webb of Natural England, cuttings were taken from the surviving plants. These were planted back out onto Helvellyn together with cuttings from male plants taken from the closest other extant population in Dumfries and Galloway. The population now numbers over 1,500 plants. There is potential for the species to seed and spread with both male and female plants back in the landscape. 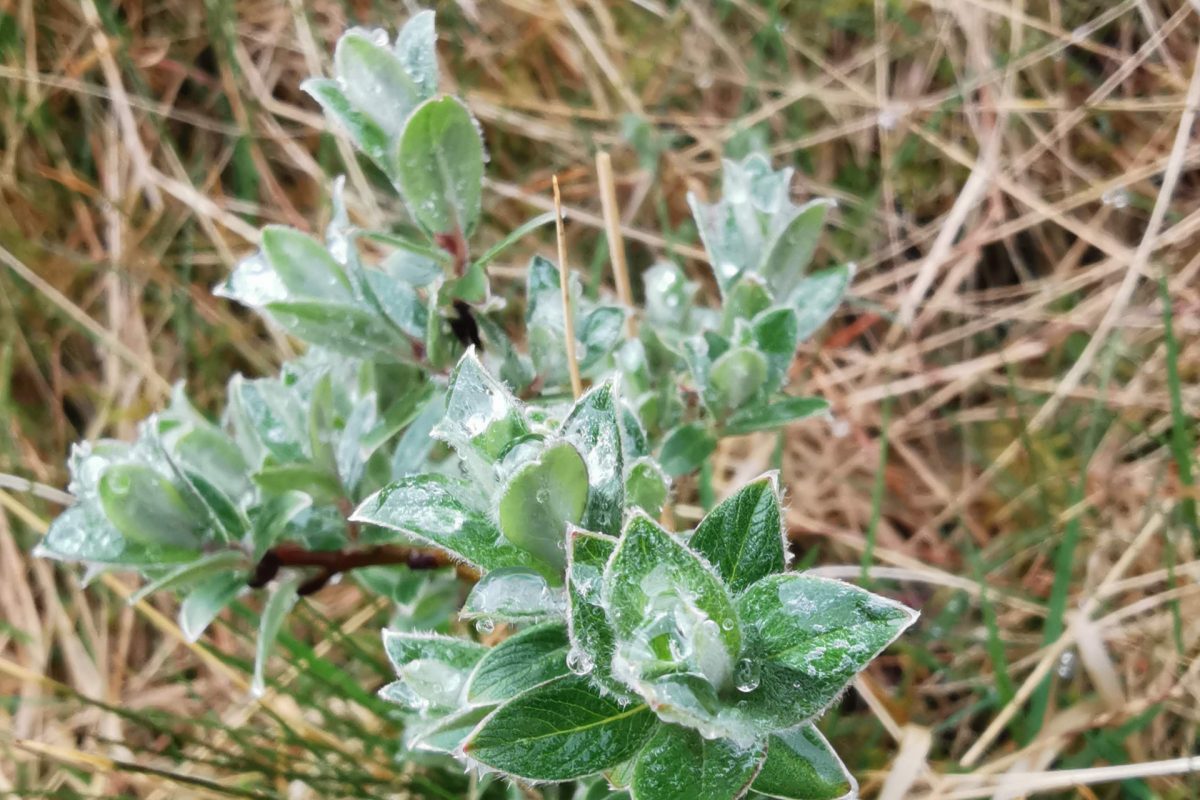 Downy willow is an important component of montane scrub, a habitat that has been largely lost from the English uplands. Fragments on crags such as Helvellyn and Harter Fell are all that we have left. The work on Helvellyn is a fantastic start and helps to safeguard the original relict population. However, we need to think bigger, and so we have begun planting Salix lapponum at Mardale too. Around 100 plants grown from cuttings from Helvellyn and Dumfries and Galloway were planted in 2018 and 2019 into the exclosure, many of which are thriving. However, working only from cuttings places an obvious limit on how many plants we can grow. 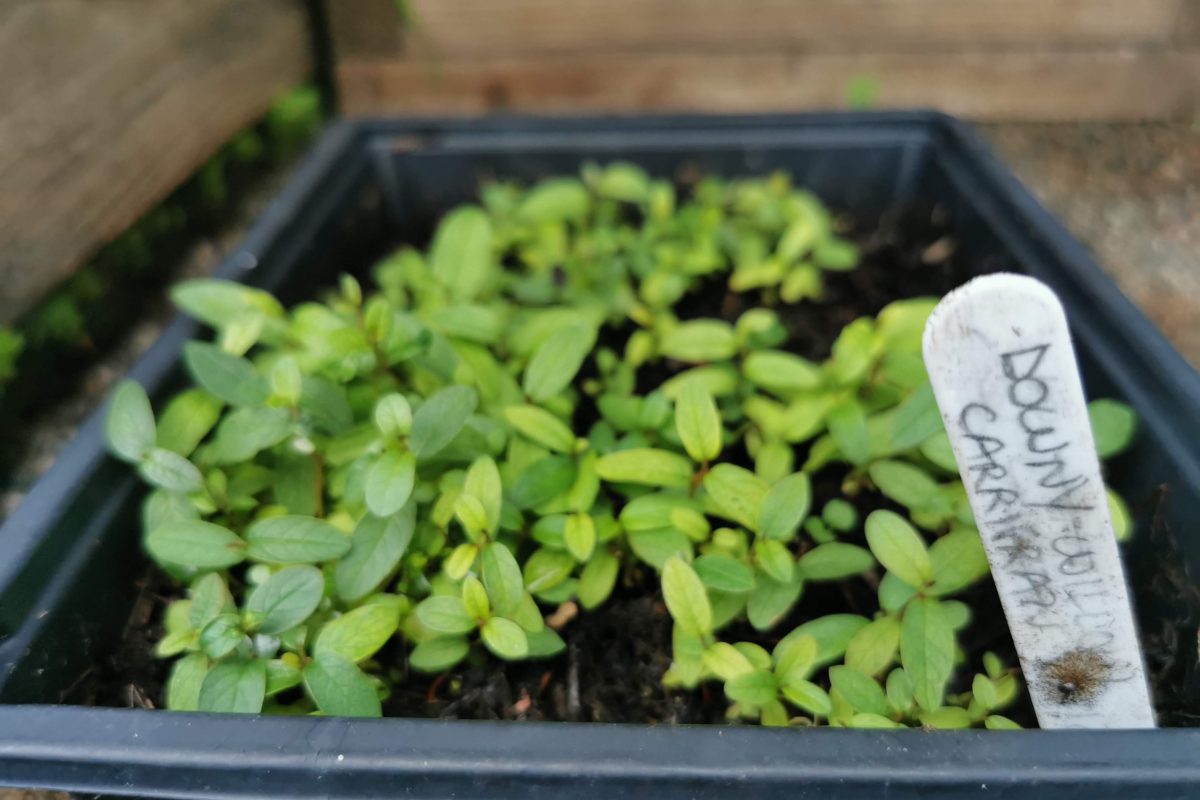 In early July of 2021, the Haweswater team paid a visit to Carrifran, a spectacular rewilding project in the Scottish Borders. The team at Carrifran have also been planting Salix lapponum, and have had a good head start on our efforts at Haweswater. As we ascended the steep valley sides, we came across many healthy-looking Salix lapponum bushes with seeds that were drifting off in the breeze. There were huge numbers of seeds, so we filled a few lunch boxes with them, recognising that we’d been incredibly lucky with our timing. Willow seed stays viable for a very short period, and so those we collected were spread onto damp soil as soon as possible. Amazingly, some showed visible signs of having germinated by the next day. Under the careful eye of Jo Chamberlain, we should end up with several hundred new plants suitable for planting at Mardale in the coming years. 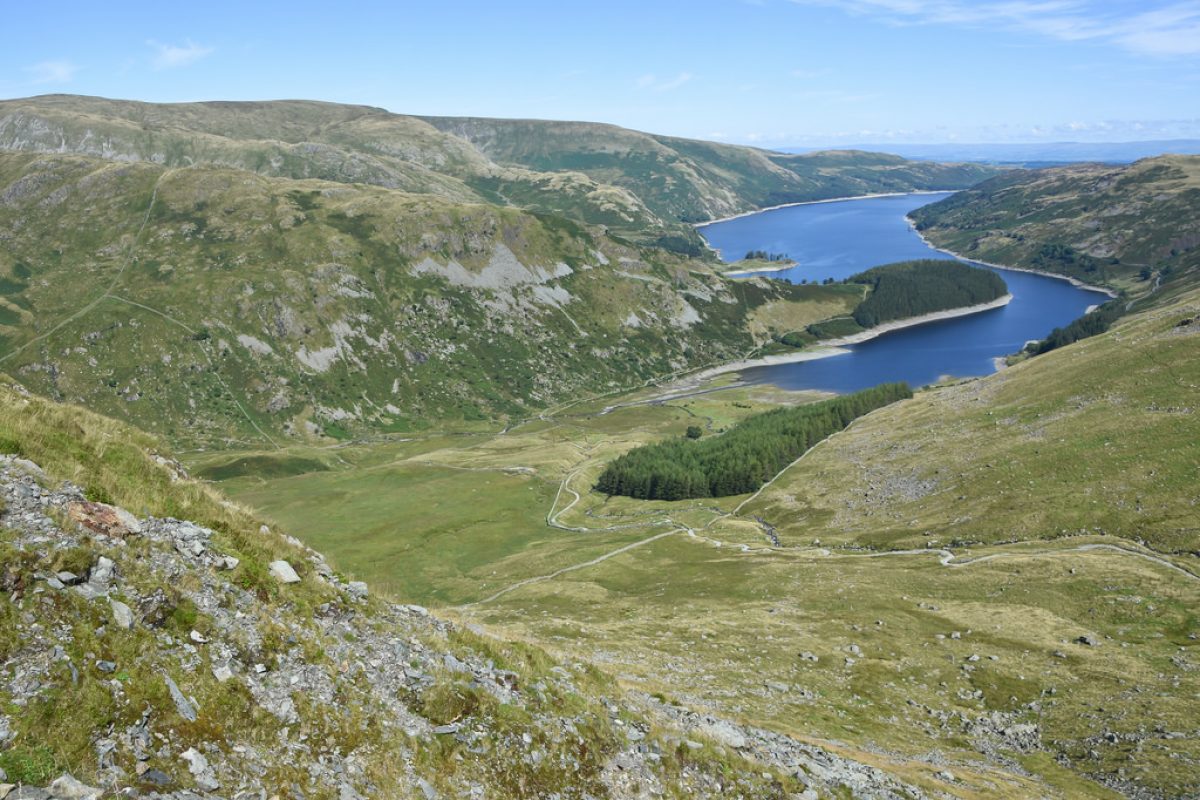 The Mardale Mountain Meadow alpines conservation project, although a large area, is only a small proportion of the land that we look after at Haweswater. It was always intended as a foretaste of our wider aspirations. 2021 has seen a couple of developments that will allow a big increase in ecological recovery.

Regular visitors to the area might notice that a new fence has appeared, running up the crag from the back of the Mardale exclosure to connect up to another fence at the top of Harter Fell. This fence will prevent the ingress of sheep from neighbouring Kentmere Common, something which has hampered habitat recovery for many years. Thanks to this new fence, we have been able remove sheep grazing from around 950 hectares of Mardale Common, and replace them with a much more nature friendly, extensive cattle grazing regime. Most of Harter Fell and its precious alpine flora falls within the fenced area, and the new grazing setup should help some of these species to spread. There are few places of this scale in the Lake District fells that are not grazed by sheep, so it will be fascinating to see how nature responds.

As a charity, your support is invaluable in helping us to conserve alpine plants and their native habitats 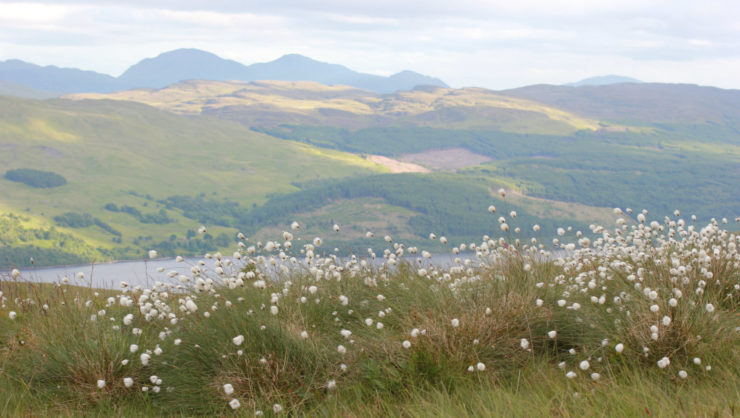