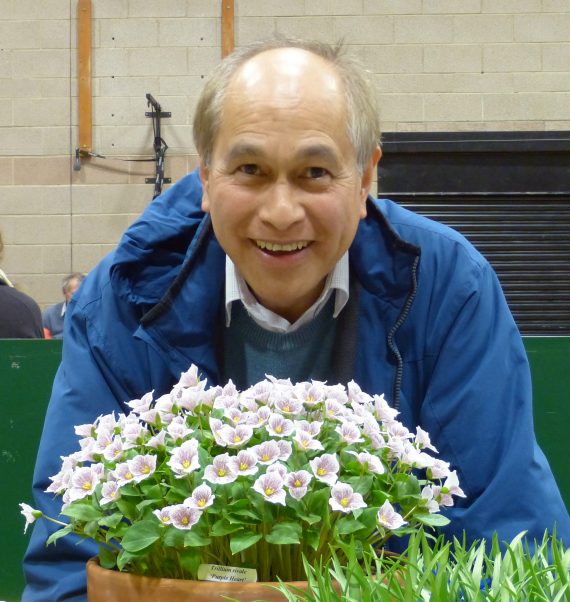 When it comes to the highly skilled, intuitive cultivation of a dazzling array of demanding, little-grown alpines and hardy bulbs, Cyril Lafong has very few equals. He has been at the top of his game some 30 years. His Polygala calcarea ‘Lillet’ was awarded a SRGC Forrest Medal when he exhibited for the first time as a supposed beginner, though he had by then been growing some ten years in preparation. The obvious comparison is with Eric Watson (1923-2004), who was meticulous, gifted and influential, as acknowledged by all his peers. But Cyril Lafong tends a garden several times the size of the one Eric had at Wide Open, growing a wider range of plants.

Taking a current snapshot, who else can claim enduring success with Tibetan Saxifraga ludlowii, the Kurile Islands endemic Pulsatilla taraoi, seed-raised New Zealander Raoulia eximea x hectori, or Chinese Primula dryadifolia? Also from SW China, a single clone of yellow Lilium lophophorum has been steadily increased to yield stands with over 20 flowers, and he has tamed slightly lower altitude, blackish-flowered L. souliei, another tricky proposition most have failed to maintain.

This nomination is not predicated on his show bench successes, for all that these, as a matter of record, make him one of the most successful alpine plant exhibitors of all time, but on his inspiring plantsmanship, his championing of first-rate plants (he has submitted numerous of these to the RHS Joint Rock Garden Plant Committee, and distributed them among fellow enthusiasts and nurserymen), his inspired hybridisation, and his many achievements with supposedly ungrowable plants both under glass and in the open garden.

His Fife garden is on a steep, terraced slope, where plants such as challenging Chinese Corydalis calcicola, pulsatillas in large numbers (he has by far the most comprehensive assemblage of these in the kingdom), cypripediums (which he grew to the highest of standards long before the Anthura boom) and Primula renifolia (virtually bedded out) prosper.

Under glass, in several cold greenhouses and a succession of frames, he has built up one of the finest collections of alpines in private hands. Highlights among plants from the southern hemisphere include Sebaea thomasii from the Drakensberg, a mighty clump of South Islander Ranunculus crithmifolius and several overflowing pans of Andean Tecophilaea cyanocrocus. Dr Lafong is also one of the few to have flowered Patagonian Oreopolus glacialis, Jaborosa volkmannii and Viola dasyphylla – and keep them in character.

An ongoing Daphne hybridisation programme has given rise over the past 15 years to notable clones such as Daphne ‘Bonnie Glen’ (petraea ‘Cima Tombea’ x hendersonii ‘Rosebud’), D. ‘Colinton Crown’ (petraea ‘Cima Tombea’ x eschmannii ‘Jacob Eschmann’), Daphne ‘Liberton’ (arbuscula f. radicans x hendersonii ‘Rosebud’) and Daphne ‘Torwoodlea’ (cneorum ‘Eximea’ x petraea ‘Clone F’). He and the other leading practitioner in this field, Robin White, have exchanged material and information throughout. Using Daphne petraea as either seed or pollen parent in many cases, promising dwarf hybrids have been selected and are being trialled. Dr Lafong is an expert in the technique of grafting, which has enabled him to keep in cultivation several clones of D. petraea that would otherwise have been lost.

Other plants he has named include Dionysia ‘Annielle’, Androsace muscoidea ‘Millennium Dome’, Dactylorhiza ‘Sweetcorn’ and Fritillaria acmopetala ‘Lamplight’. These reflect his championing of cushion plants, hardy orchids and a wide range of fritillarias (F. gibbosa and F. poluninii he grows remarkably well). One could expand the list of bulbous plants in which he specialises considerably, adding juno irises, the most demanding of crocuses, erythroniums and trilliums.

Cyril Lafong has made a huge contribution to cultivation of alpine plants He is a specialist, an experimentalist, a conservationist, a perfectionist, a keen observer-cum-pragmatist and an inventive plant breeder rolled into one – a rare combination of skills that has enabled him to excel at growing rarities. 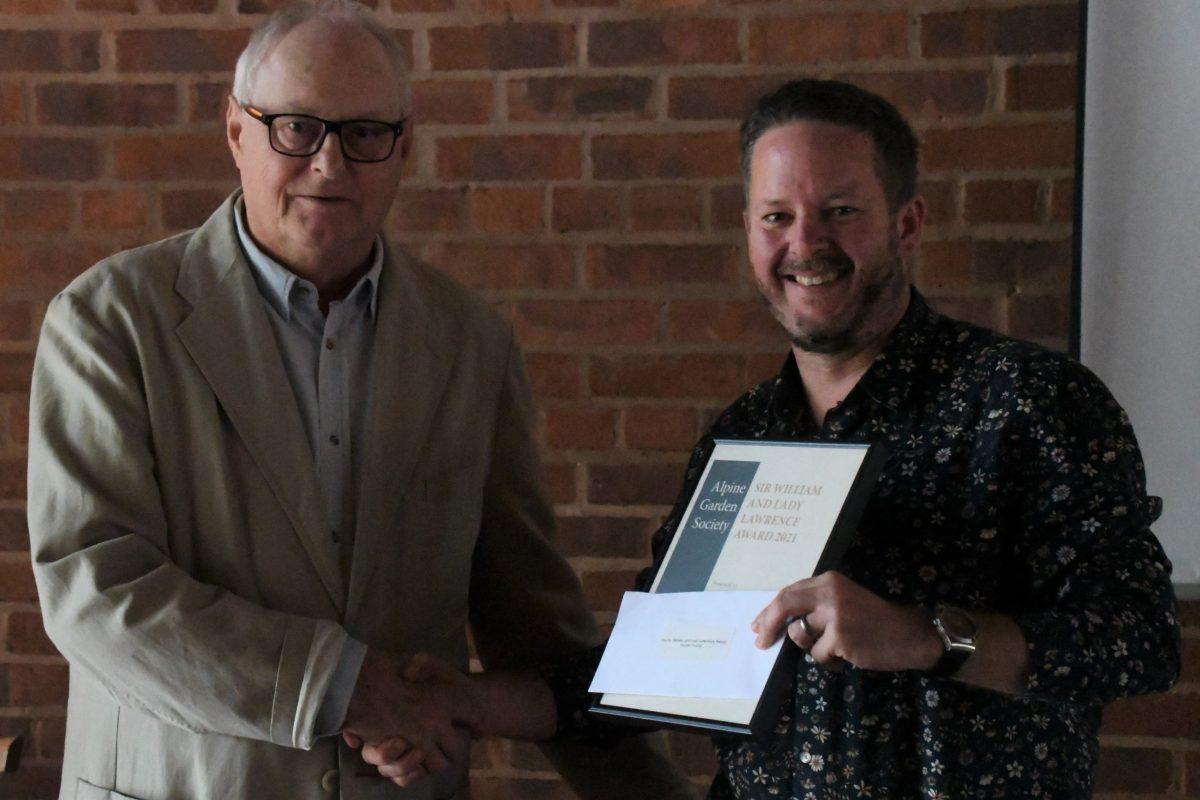 Joint winners: David Charlton of the Derby Group.
David has played a major part in the success of the group over the past 30 years, serving as Chairman 1991-1993, and Group Secretary since 2010. A former AGS Board member, he has given and organised talks, including zoom lectures that benefited local groups during the pandemic. 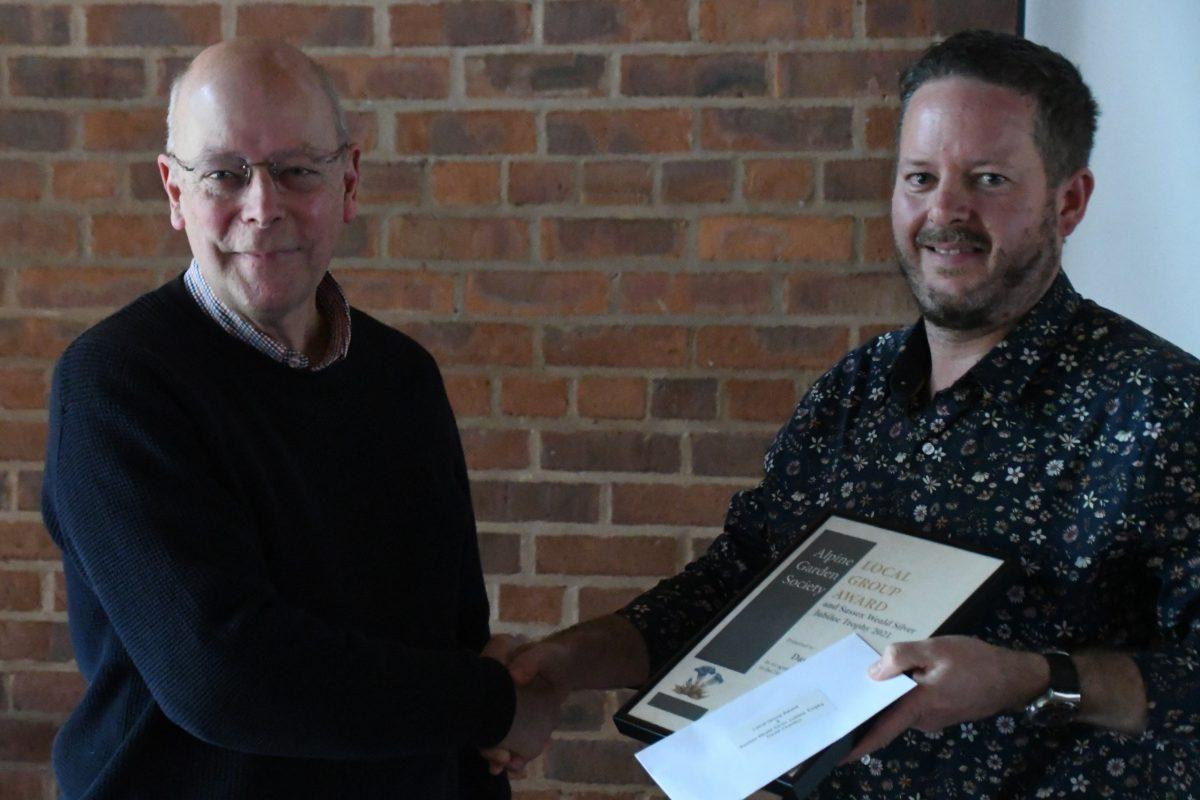 Joan and Liam McCaughey of the Ulster Group.
Both have been active for decades in the Ulster Group, as members or while serving on Committee. Joan and Liam have both been in charge of IT and organised zoom meetings during the pandemic. The pair have been on many AGS tours and produce joint lectures, as well as encouraging others to get involved in the work of the AGS.

North West local groups. The NW bubble, based in and around Cheshire and Lancashire for rising to the challenge of the pandemic and for their contribution to the success at RHS Tatton Park show. During lockdown, the cluster of local groups worked together to offer and innovative and interesting programme of zoom lectures. 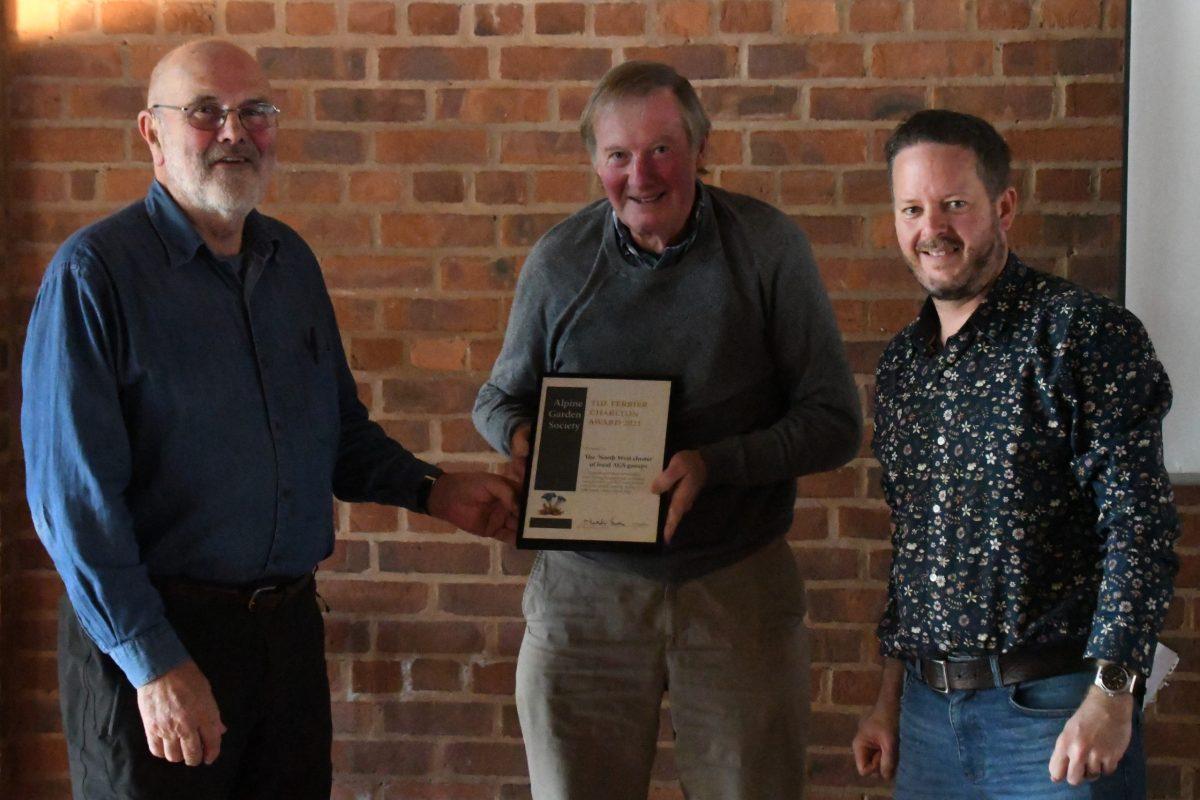 Anne Wright for her work with Narcissus. Anne has won numerous awards for the plants and is known for hybridising more compact forms of narcissi.

Frank Hoyle: How to succeed with Draba (March 2020) 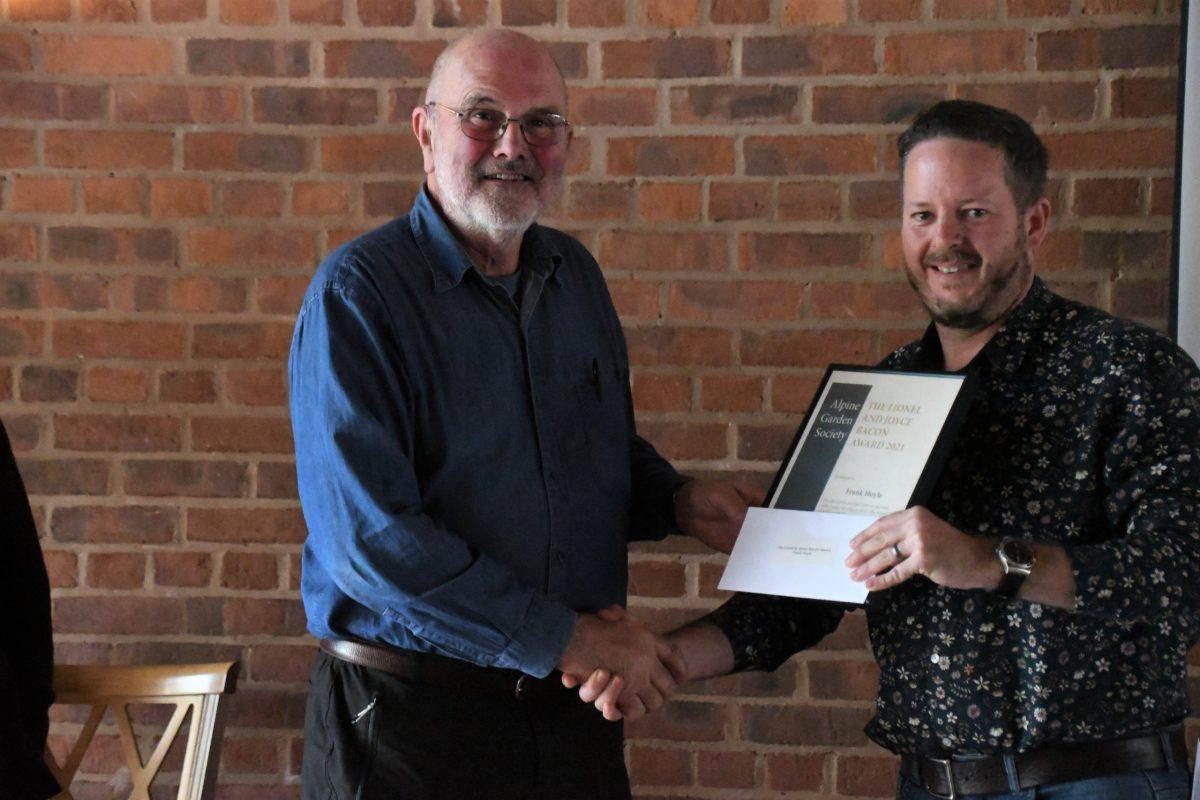 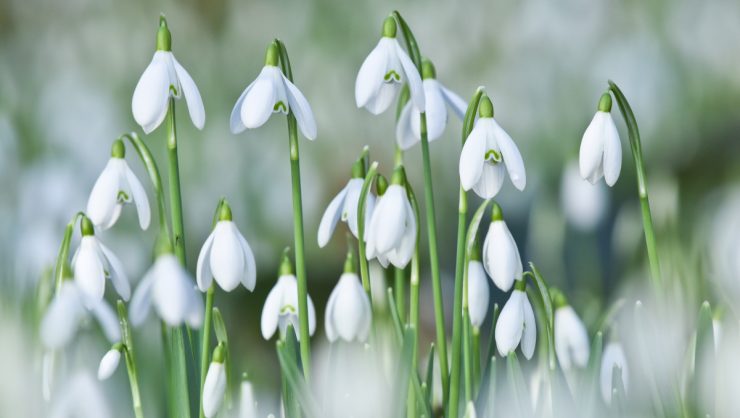 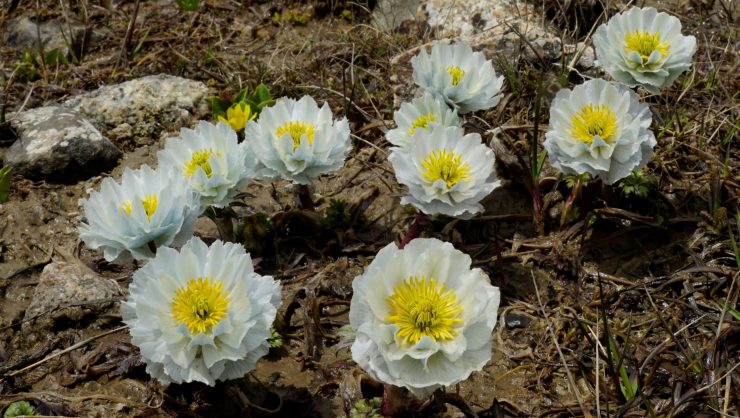 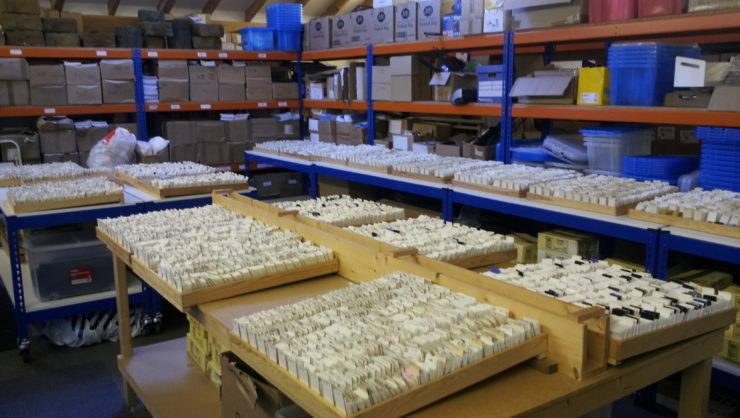